Hello, everyone and welcome to a new edition of the Daily Stock Watch! Standard has been the talk of town lately, with the massive prices spikes from the mythic rares of Dominaria, and some positive movement on some unplayable cards in recent sets, thanks largely to new brews and speculations on what could be the best decks in the upcoming Pro Tour. One thing that has also been talked about a lot lately is the insane movement of prices for cards that's on the Reserved List, and this has also caused some price spikes for other cards that hasn't seen a reprint yet. With all this in mind, I'd like to talk about a card today that has been on a tear by skyrocketing to its all-time high of $29.98 as a purely casual favorite, and what you should do about it as a finance junkie. 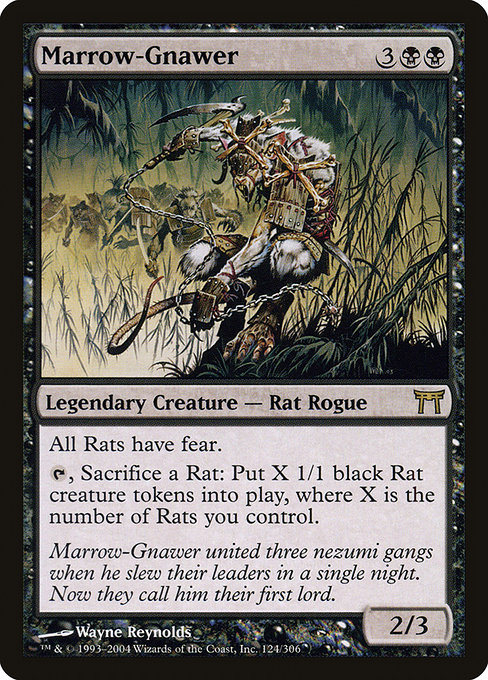 This dude is the cult leader of all Rat Colony and Relentless Rats lovers. He takes marrow-gnawing to another level by trying to chip away from your wallet with its ridiculous price, while staying in a league that reminds me of Exquisite Blood and Grave Pact. I'm not saying that these cards are seeing extreme price gains for no reason, but I've been sitting on some of them for a while because nobody is even interested in picking them up for their prices. I could say the same for this rat leader which has this nuts price tag, and a market that is clearly not looking for it.

It's a typical Commander deck with all the feels of a tribal classic. It packs some really good Commander cards and a bunch of rats to pester your opponent. It's not really a tier one or two deck, so I don't see the reason why the main guy from this bunch is priced this high. I would have understood it if this was some fringe-Legacy playable deck, but I'm quite sure that it isn't. It's time to move around these copies if you have absolutely no need for it. This is one of those price spikes that's built around a fad, and in the aftermath of the Craig Berry-effect.

At the moment, there has been a massive buyout of English near mint copies of Marrow-Gnawer across big sites such as StarCityGames, Card Kingdom and ChannelFireball. SCG still has some foreign copies of the card from anywhere between $11.55 up to $16.19, and I would be fine in buying them if you have the absolute need for the card and have nothing against having foreign copies. Foils are also sold out at the $19-$25 range, and expect these prices to move as well once stocks have been replenished. I'm really recommending that you move your copies around as soon as you could, before sellers start undercutting themselves and stabilizing the market price once more. Now's the best time to make some profit out of a card that shouldn't even be this expensive to begin with.