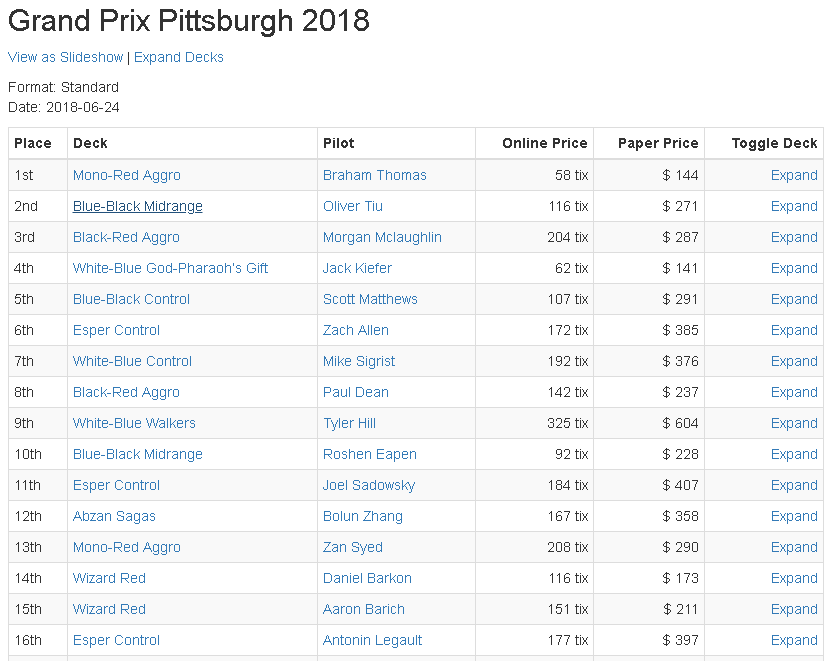 Overall, Standard is cheap—as you can see in the list, the average cost to make a Standard deck is around 150 tickets. The only really expensive cards in Standard are Karn, Scion of Urza, Rekindling Phoenix, and Teferi, Hero of Dominaria.

However, the most expensive cards in the format don't always make up the best performing decks. The GP Pittsburgh winning list contains zero copies of those cards mentioned above, while GP Singapore winner Yuuki Ichikawa only has two copies of Teferi in the Sideboard. From the GP events, we can actually separate Standard decks into three categories:

Many other decks, like GB Constrictor, Mardu Vehicles, and UG Karn, did not perform so well during the weekend. There won't be other Standard Grand Prix for awhile but there will be Nationals, which is a mix of Standard and Draft. So, if there would be another big metagame change affected by offline events, it will be caused by one of the Nationals Top 8 decks. Therefore we are going to look at a few potential decks that might become the king of Standard in the next few weeks. 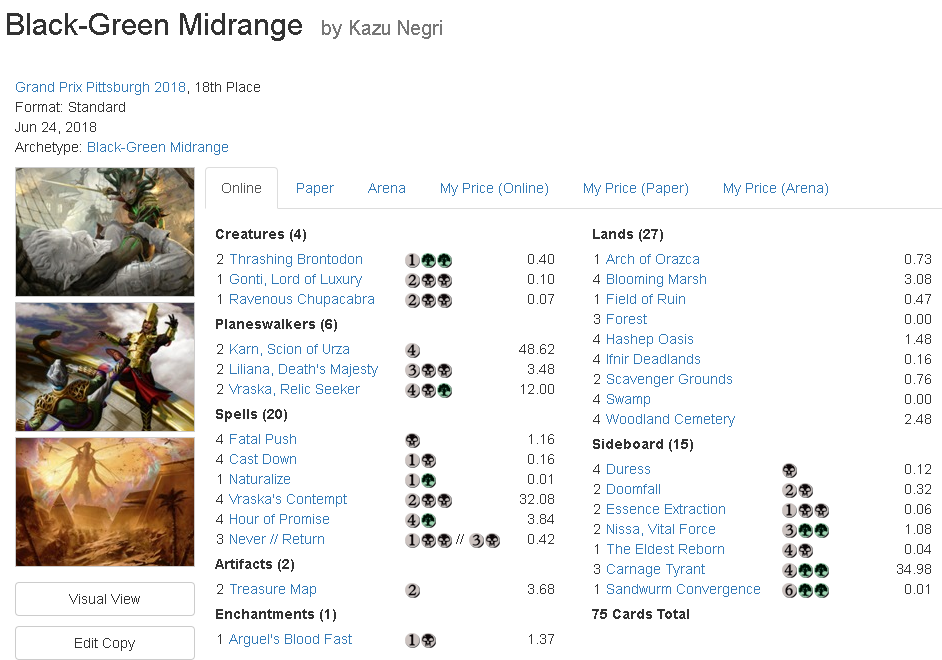 It's always the case that midrange decks become better from week to week as players find better builds for their favorite decks. For example, if you look at BG Midrange above, it looks like a completely different deck compared to BG Constrictor. Considering that a new deck made 18th place at a GP, I have to give this deck another look.

Hour of Promise is actually the card that stands out. With the land tutor, the player is able to search for different utility lands in the deck depending on the matchup. Arch of Orazca seldom see play in Standard but I think it is really good in this deck, as most of the spells will put more permanents into play. I think many players online have already been messing around with this deck, which means Hour of Promise should be increasing in price shortly.

Scavenger Grounds is another card that is good in the current metagame as God-Pharaoh's Gift has returned to the top of the format. The interesting part of this deck is that it is pretty resilient, as the current version already has fair number of cards against each matchup. 1) Good amount of removal against aggro decks; 2) A planeswalker package and discard spells in the sideboard to to fight control matchups; 3) Mainboard artifact and graveyard hate against Gift decks.

Recognizing that this deck is good against the current "big three," you know it has some potential. My suggestions on cards to watch from this deck: Hour of Promise, Nissa, Vital Force, Arch of Orazca, and Scavenger Grounds. 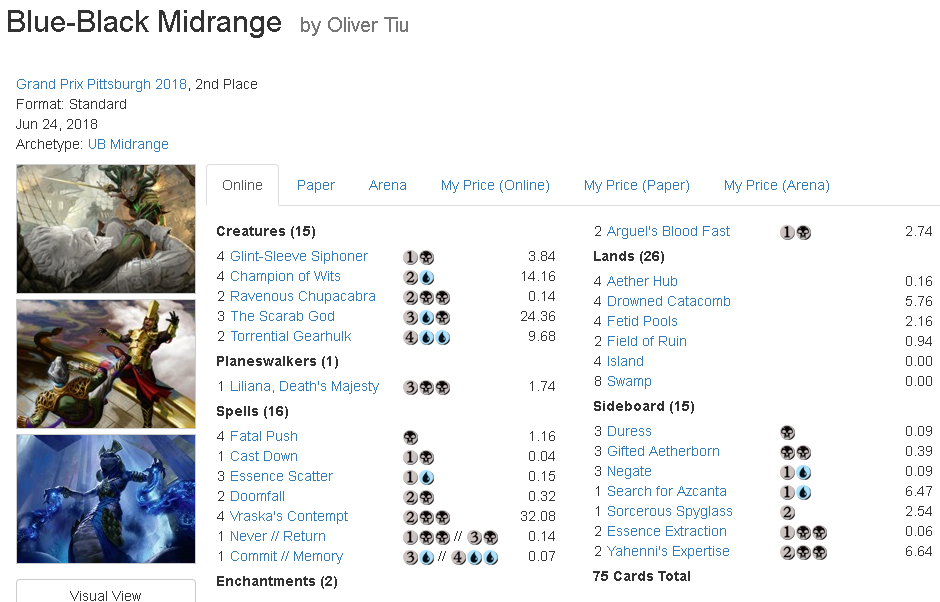 The most expensive cards from this list are the four-of Vraska's Contempts. The rest of the cards are at their low points mostly. While it's generally ill-advised to buy cards that are going to rotate two sets from now, sometimes there can be exceptional cases where cards will still increase in price.

Blue-black is the color pair that has the most value creatures and good removal spells. The list above, played by Oliver Tiu, plays all the best creatures in Dimir colors. The only downside to these creatures is that they are from blocks that are going to rotate in October. Let's look at each of those creatures played here:

Glint-Sleeve Siphoner is the Dark Confidant of current Standard. It's the best card draw engine provided you can generate enough energy each turn. 1 ticket should be the bottom price before the card enters Modern, because players will still need this card for some time.

If UB or other black midrange decks become tier one in the following weeks, there's a high chance that Siphoner will gain value again. I think the possibility of black decks coming back is pretty high, so I suggest grabbing some Siphoners just in case.

Champion of Wits increased in price along with the increase of Gift decks in the format. However the price will not increase further at this point unless a third deck with Champion of Wits comes up. I don't think it's wise to buy copies of this card right now.

*Sigh* The Scarab God is one of the failed specs from Pro Tour Dominaria, but this card once again appeared at the top tables. This is definitely a trap if you are not careful. It's usually very hard for mythics to go up in price again after they reach their low price, unless they are Modern-or-older-playable. Some good examples of mythics that fall in the same category as Scarab God: Gideon, Ally of Zendikar and Ishkanah, Grafwidow.

Torrential Gearhulk was once a four-of in UR Control variants. At the Pro Tour, Control was comparatively weak if we look at how dominant the red decks were. However, things have changed after a few weeks—Gift decks and other midrange decks popped up with better configurations to beat the red decks.

Torrential Gearhulk is one of the most important cards in blue Midrange/Control decks, which I can foresee becoming more popular soon. Aside from Standard, Gearhulk is also played in Modern and usually can catch opponents by surprise. So overall I think Gearhulk is worth investing in; do grab some copies for investment if you have spare tickets. 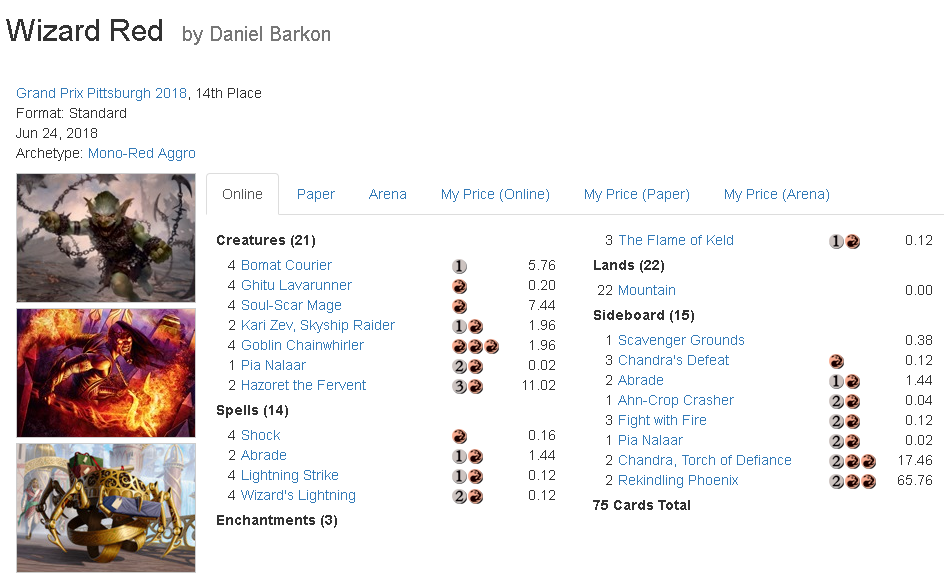 Wizard Red is a new red variant from GP Pittsburgh. The deck basically plays eight copies of Wizards so that the Wizard's Lightnings in the deck become Lightning Bolts. This deck is super cheap on MTGO and most cards are cheap to get.

I'm actually not going to suggest any card from this list but I would recommend picking up this deck if you want to win some chests from leagues. I think picking up cheap but powerful decks is an important part of MTGO finance, so I will try to include more deck suggestions in my future articles. What do you think? let me know your thoughts in the comments section below.