And now, back to the grind. I skipped last week due to the travel distance involved, but I wasn't about to miss this week. That said, I want to call out that both PPTQ's last week were at stores that I didn't know existed, and one was in a town that as far as I know has never had a game shop that ran competitive REL tournaments before. As far as I'm concerned, new stores in new markets running premier events is a strong indicator of Magic's growth and success. I just wish it was happening within a reasonable driving distance. 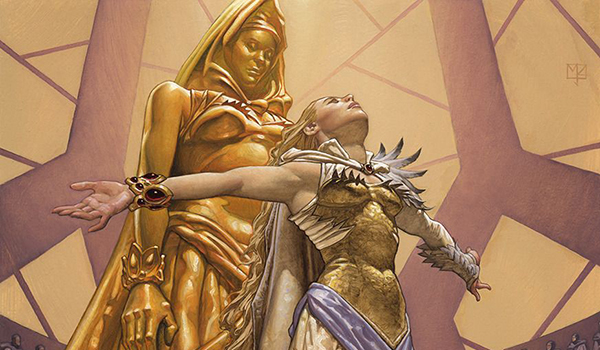 Another Banned and Restricted Announcement has come and gone with no changes for Modern. I'm not surprised; none of the supposedly broken decks have shown they need to be dealt with yet, and the metagame looks pretty healthy. We've also had one set of unbannings this year, and Wizards hasn't done more than one per year (usually only once every two years). Adjust expectations accordingly.

I took my own advice from Week 2 and didn't wait until I was at the venue to decide on my deck. I'd put more time into Spirits than any other deck and was very confidant in my build. Jeskai and Storm have continued to be fine decks, but given what I've seen of the PPTQ fields and my own play at this point, it will take a very warped or hostile metagame for me to shift off Spirits.

I'm a bit frustrated by Ghost Quarter. I've had a lot of situations where it won me the game and very few where Mutavault would have been better. I've never needed the additional attacker against control, nor would Mutavault have been useful in creature matchups; on the other hand, Quarter has been key to beating Tron, an otherwise difficult matchup. However, I really wish I didn't run either. Having so many colorless lands really hurts, and I've had to Quarter my Quarter a lot to actually cast my spells. My older Spirits decks ran Faerie Conclave for that reason. I'm not prepared to swap lands just yet because I really need Quarter, but I really wish there was a colored alternative.

This PPTQ was held at the shop where I finished last season, and I was a bit down on going. I have never done very well at any tournament I've participated in at that shop, from FNM-level up to PPTQ's. I don't believe in curses, but once is misfortune, twice is coincidence, three is a pattern, and more than four consecutive below typical performances is statistically improbable. I wasn't expecting to do well as a result, but I'm also committed to attending as many Modern PPTQ's as possible, so I went. 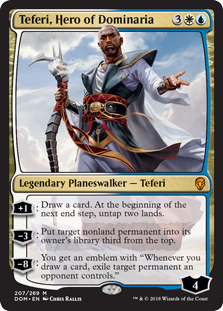 The shop was packed, with 59 players for six rounds of Swiss. This is not especially surprising considering that this was the only PPTQ in the state this weekend, but the shop needed to find extra tables to fit us in. As often happens, the shop underestimated the need for judges, so the shop owner had to judge as well. It never happens, but I wonder what an event with too many judges might be like.

This logistical problem contributed to the event running very long, but wasn't the main culprit. That "honor" goes to the control matchups that ran to time and then took 10-15 minutes to play extra turns almost every round. In each case, one of them had the game stabilized, but couldn't close it out (either by failing of deck or pilot).

I arrived early to really scout the field. There were a lot of players that play a number of decks there, so recognition didn't help. Not many were playing test games, and it's not socially acceptable to read their deck registration sheets over their shoulder, so I really didn't have a read on the room. I did see a few Humans decks and Eldrazi players, but that wasn't enough to influence my deck choice. Even then, Spirits would have been the choice for its Humans and Eldrazi matchups, while Jeskai is poor against Eldrazi.

It worked out perfectly, and I cruised to 4-1-1 in Swiss before losing in the semifinals to Mardu Pyromancer. The field turned out to be very favorable for me, the most popular decks being various flavors of control, Humans, and Spirits decks. Interestingly, I saw more UW than Bant, though again that may be personal taste. I beat three Humans decks and Eldrazi Stompy, and lost to Mono-Green Tron during the Swiss. 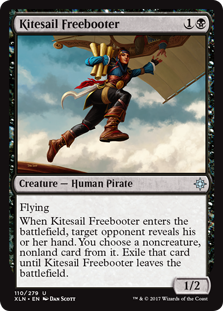 I used to think Humans was a fairly even matchup, but I haven't dropped a match in weeks. Spirits and Humans are very similar as disruptive creature decks, but Spirits has a number of advantages. Everything flies, so Spirits can block but not be blocked most of the time, which is a huge edge in combat.

The bigger edge is in sideboarding. Thanks to its manabase, the best Humans can muster is Izzet Staticaster, and in my experience if Staticaster is impactful, Spirits wasn't winning that game anyway. Spirits has actual mana for instants and sorceries and can play sweepers. Generally, Spirits's best draws are worse than Humans's, but its average draws are better.

Rounds 1 and 4 were against Humans, and played out the same way: each game I deployed an airforce, my opponent couldn't go big, and I won the race. When Humans doesn't have a big Champion of the Parish or Thalia's Lieutenant, its creatures prove pretty anemic in the face of Supreme Phantom or Spell Queller. In game 2 of round 4, I was actually hit pretty low before stabilizing by Imaging his Reflector Mage, then getting lords down to kill in one attack. 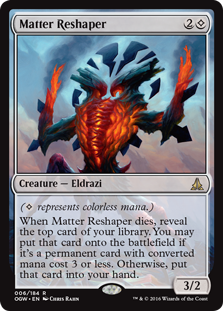 Round 2 was against Eldrazi Stompy, and my opponent didn't have great draws. He had accelerants, including Gemstone Caverns game 1, but was only accelerating into Matter Reshapers. Vial and Rattlechains producing multiple Spirits beat him handil. I was surpriysed by Skysovereign, Consul Flagship game 1, but I had been sandbagging Paths, so it was just a very expensive removal spell.

Round 3 is my loss, to Tron. Game 1 is very bad, as I have no answer to her Ugin in the deck, and the game was never close in the first place. In game 2, she mulliganed twice and kept a no-land five because any land would have unlocked her cantrips. It didn't come. Game 3 saw me crushed by Oblivion Stone into Ugin. 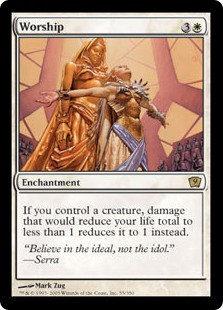 Round 5 was Humans again, and game 1 went pretty much perfectly for him with an explosive opener. Game 2 is similar, but my hand is better, so I'm able to fight and chump block his massive Champion. This gives me time to topdeck Worship with two Drogskol Captains out. He had used his Reclamation Sage already to kill Vial, and ended up missing on Image. Game 3, his hand is not explosive and I easily win.

Because of the numerous unintentional draws during the Swiss, the Top 8 was not quite a clean break round six. However, I'm high enough at table three with good breakers so I can't be knocked out and choose to draw. Table two opted to play it out since the prize payout was incredibly top-heavy, which complicated the Top 8 considerably. I ended up at 7th seed.

The Top 8 consisted of two Mardu Pyromancer decks, a shockland-wielding Humans deck, Infect, Ad Nauseam, Bant Spirits, my round 3 opponent, and myself. This meant that I would have to face my round 3 opponent in the quarterfinals. I joked that this was my chance for revenge, because we both knew that Tron is favored in this matchup. The joke wasn't funny 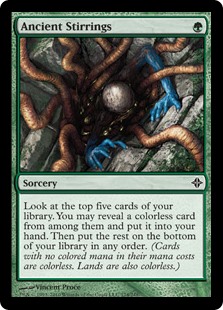 for her, since I won in two games.

Game 1 we both mulliganed, but hers didn't provide any Ghost Quarter insurance, and I had Selfless Spirit for her Oblivion Stone. Game 2, she had Tron multiple times over, but nothing to cast besides Karn Liberated. I won despite a lackluster battlefield.

The semi's are against Mardu Pyromancer, and that's a tricky matchup. It's all about eking out card and mana advantage, and small mistakes or miscalculations have huge (and often disastrous) consequences. Of course, game 1 is a non-game as I mulligan into oblivion; game 2, my opponent is stuck on two lands with only three mana spells in hand. Game 3, I have an okay hand that doesn't line up well against his, but I think I made a number of poor choices in some exchanges that dismantled any chance I had. I don't know that I could have won the game, but I'm sure I should have lost when I did.

I really need to more carefully examine my plan against black attrition decks. The matchups aren't unfavored on paper, but actually playing them is very hard, and a single misstep can be fatal for either deck. There is definitely win percentage to come from the sideboard too, and I'm 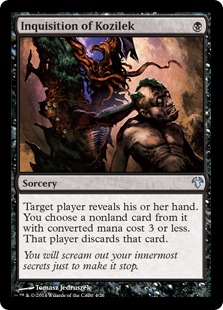 reevaluating my strategy. I had done minimal boarding, focusing on graveyard disruption for Vials as was always my plan with Merfolk; that isn't working for Spirits. Perhaps Eidolon of Rhetoric is good because my losses tend to come from multiple spell turns, but I've never tried it.

I also think I was keeping openers too easily. I kept a lot of mediocre hands that worked out, but in the Swiss against Tron and against Mardu, I couldn't muster enough pressure. Spirits doesn't mulligan well, and deliberately going down on resources seems dangerous, but it might be better than what I'm currently doing. I intend to mulligan more aggressively in future tests to see.

I was happy with the my deck's performance overall, though the flex slots didn't have a chance to shine. I didn't have matchups where Remorseful Cleric was important, and never saw Militia Bugler against Mardu. 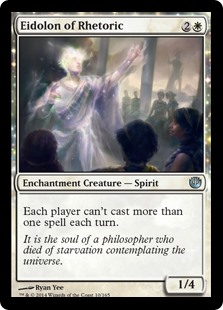 Reflector Mage was appreciated against Humans, though not as much as Image copying their Mage. This tournament didn't really give me useful data on my current configuration.

The same is true of the sideboard. Damping Sphere would have been a good card against Tron, but I don't think that's a reason to cut the Eidolon of Rhetoric, which is far more powerful against combo decks. Settle the Wreckage was a bit awkward since it cannot be used proactively, but the potential upside in all my Humans matchups was so high that I think I'm fine with that. Having more outs against Bogles or indestructible is also useful.

If nothing else, I'm glad I finally have a good result at that store. Next week is a double PPTQ weekend at my local shop and the store where from my pre-Vegas report, so I'm hoping for a win on home turf. Tune in then to see how it goes.

4 thoughts on “Return to the PPTQ Grind: Week 3”