I hope everyone had a great holiday season and a fun New Years’ celebration. The year 2018 was a fascinating one when it came to MTG finance. Throughout last year we had crazy buyouts, a concentrated move on Reserved List cards, a surge in Old School demand, more Masters sets and reprints, and the reintroduction of Legacy and Modern at the Pro Tour.

But that doesn’t mean 2019 will be uneventful. Just because the past few months have been soft doesn’t mean it will continue this way. I believe some interesting things will happen in the Magic finance world in 2019—even despite an economy that is perhaps losing steam. While we’re already a week into 2019, this is technically my first column for the New Year. Therefore, I want to summarize my top three predictions for MTG finance in 2019.

I know there is a debate about the print run of the Ultimate Masters Box Toppers. Some have argued there may be as much as twice the population of these foils than Masterpieces. To me, this is a moot point. Any mathematician will verify that doubling a small number yields another small number. The supply on TCGplayer is also very reminiscent of a Masterpiece set.

These are attractive, desirable, playable cards in very limited supply. We’ve watched this movie before. We know what happens. When it was Masterpieces, we observed multiple MTG finance personalities hyping up these rare cards while also buying significant amounts of them. The result was a significant spike in price and opportunities to profit.

While demand has settled down since, the fact of the matter is these are still popular and incredibly liquid. As I’ve written in the past, Card Kingdom’s hot list—which was once filled with Dual Lands and Old School Cards—is now riddled with Masterpieces. Also interspersed with these Masterpieces: the Ultimate Box Toppers. Looking beyond Card Kingdom, other vendors are also striving to acquire these, presumably since they can’t keep copies in stock. Check out this hot list board as an example from last weekend’s GP. 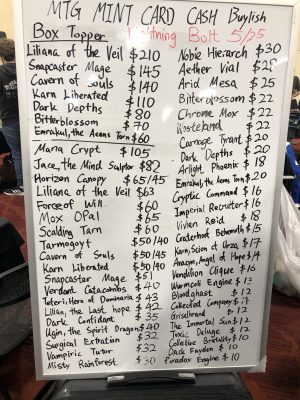 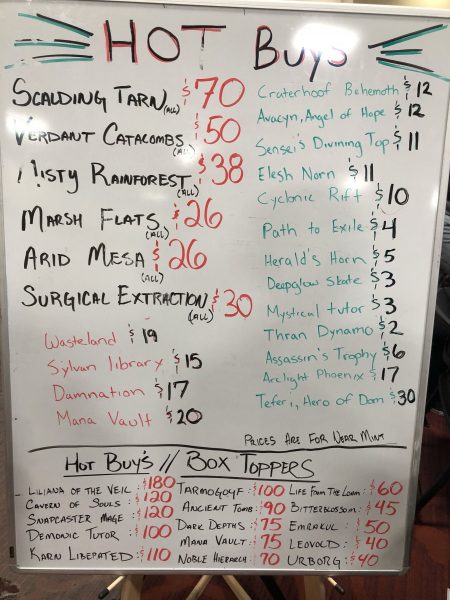 I’m confident that folks will catch on in 2019 and start to make moves. It won’t be me, mind you. I made sure to get a couple box toppers so as not to miss the boat completely. But it’ll likely be the usual suspects who hyped Masterpieces that will pound the drum when it’s time to move on these box toppers. I’d recommend acquiring what you’re after soon while the market is still soft because any influx of cash (such as from tax returns) could funnel into these chase foils.

It wouldn’t be much of a prediction to state that there will be reprints in 2019. Wizards has milked the secondary market time and again by introducing reprints to sell product, and this year will be no exception. However we know there won’t be another Masters set for a while now—if there was, then calling the last Masters set “Ultimate Masters” would be a huge misnomer.

That means we’ll only have Commander and other similar supplemental products to introduce reprints. I’m sure there will be plenty so one should not become too reckless in speculation. But I believe there will be at least a few months through Spring 2019 when prices can appreciate mostly “worry-free.”

I’d focus on the Modern staples that were not reprinted in Ultimate Masters. My number one target: Jace, the Mind Sculptor.

This card so liquid that it might as well be cash. It also has huge demand across Legacy, Modern, and Commander. While this card’s demand is fairly stable nowadays with Legacy and Commander, the Modern format could really catalyze explosive growth in the year ahead. When Jace was unbanned, some people (including myself) incorrectly concluded that Modern would be completely warped. That hasn’t happened, but that doesn’t mean it never will.

I maintain a hypothesis that blue is always the best color in Magic, and all nonrotating formats will eventually warp towards a blue-based metagame given a large enough card pool. Should that happen, Jace will be a huge component in that metagame. Let’s not neglect the fact that buylists are now exceeding $80 for Jace at Grands Prix—that’s about five bucks below TCG low pricing.

While Jace is by far my favorite, you could also look at cards like Mox Opal, the Zendikar fetch lands, or Manamorphose. Each of these have upside potential when Modern interest picks up again. 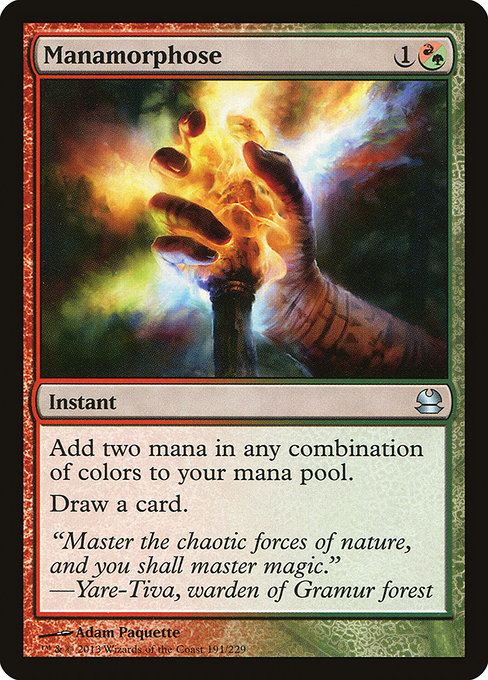 If Modern isn’t your area of interest, I have a couple other recommendations for 2019. I’ve been watching buylist pricing on Mana Crypt creep higher and higher. With no easy way to reprint this $100+ card, we may see it climb even higher. Or you could always go the safe route and pick up some Reserved List staples, such as Yawgmoth's Will or Gaea's Cradle. These cards have pulled back healthily since their buyouts last year.

I’m particularly keen on Dual Lands, as a matter of fact. These have really pulled back drastically after their buyouts sent prices to all-time highs. I bought a Tropical Island the other day for $158. $158, are you kidding me? AND I got 10% back in eBay bucks, so my net purchase price was closer to $143.

There’s no way a sleeve-playable blue dual should be this inexpensive—the market is indeed soft, but this always turns around after a while, and 2019 will not be the exception.

Since then, prices have retraced hard. This applies to nearly every card from these four sets, including the ultimate The Tabernacle at Pendrell Vale.

I remember when Card Kingdom’s buy price on Tabernacle spiked over $2,000. Now it has retraced more than 50% from its peak, with an uninteresting $1,150 buy price. This has declined steadily week after week since peaking.

Is Old School interest over? Has it gone the way of Tiny Leaders and Frontier? Are prices going to continue to fall?

First of all, Old School is still alive and very strong. There are more tournaments now than ever before, and they continue to sell out due to their limited seating. The players who love the format (myself included) are going nowhere. The prices have probably pulled back so much because it’s the speculators and market movers who have lost interest in the format. Now that there’s no more free money, I suspect speculators have abandoned this market sector in favor of others. That bodes well for us players who can once again acquire cards for less-than-exorbitant prices.

Prices may continue to remain soft a bit longer—after all, they really skyrocketed exponentially and that wasn’t sustainable. But this pullback in prices has been healthy for the Old School market and I view it as a good sign for the long term. I’ve been a net buyer recently in anticipation of a strong 2019, reacquiring cards I felt obligated to sell during last year’s hype at much more reasonable prices.

For example, I buylisted a near mint Singing Tree to Card Kingdom last year for $95. Then during Channel Fireball’s 15% off sale, I bought a slightly played copy back for $68. I’m quite attached to this card for some reason.

Other, smaller acquisitions I’ve made lately while prices are low include Haunting Wind (check out that cool art!), Recall (very good in Old School), and Citanul Druid. I even managed to acquire a heavily played Pyramids from ABUGames by exploiting their aggressive trade credit numbers.

No one is talking about these older cards anymore, which means it’s the perfect time to pick up whatever you’re after for your collection/deck. With how old and rare these cards are, any reentry into the spotlight could mean another boom in the market. While I’m not predicting massive buyouts in 2019, I think prices will stabilize and slowly grind higher throughout the year.

I believe 2018 was a banner year for MTG finance. Personally, it was probably my best year ever thanks to my timely entries into Old School and Alpha cards. Looking ahead, I believe there will be plenty of opportunity to make and save money from Magic in 2019, despite a soft start to the New Year.

Box Toppers will be in a precarious position, where any hype from podcasters and active community members could cause rampant buyouts. This seems like an inevitability, but time will tell. I also think high-end Modern, Legacy, and Commander staples that have not been reprinted recently will do very well in 2019. As the Reserved List cards retract in price specifically, it feels like a prime opportunity to make some acquisitions, particularly with Dual Lands.

And lastly, the Four Horsemen expansion sets may stop bottoming out and show some life yet again. I have noticed Card Kingdom slowly increasing some buylist prices on Arabian Nights cards—not the high-end ones, but some of the mid-tier stuff such as Elephant Graveyard and Pyramids. Perhaps this is a sign that the market is bottoming and prices will rebound going forward.

Overall, the future for 2019 is bright and I look forward to another exciting year of MTG finance!

3 thoughts on “MTG Finance Predictions for 2019”