As promised, today I'm back to help you make sound speculation decisions on Ravnica Allegiance cards. In the past this took the form of the popular Financial Power Rankings series. I hope I can continue to do that series, but it may need some re-imagining to account for some new, emerging realities of MTGO finance.

An important difference between then and now is that mythic rares now operate on a very different financial schedule from the rest of the set. This is because mythic rares are the gateway for redeeming sets. Now that redemption is the primary driver of demand, more of their value is bound up in their potential for redemption than ever before.

I am thus squeamish about investing in mythic rares from redeemable sets—at least until we see how Ravnica Allegiance shakes out, so we can use it to predict what will happen with future sets. The same is not true for rares and uncommons. Now is a good time to invest in those since they're at peak supply.

Also remember that the standard common and uncommon slot was removed from the Treasure Chests, which means that no steady stream of Pteramanders will be flooding the market as they would have in years past. 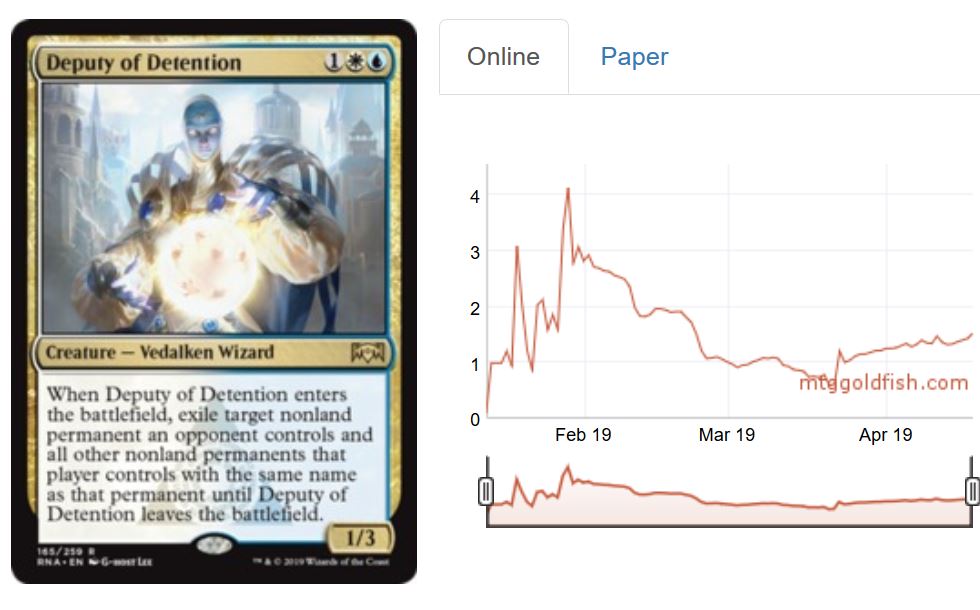 I'm much lower on this card than the market is. Right now it is the most valuable rare in Ravnica Allegiance, as it is seeing significant play in Modern and some play in Standard.

Depending on the demands of the future metagames in those formats, Deputy of Detention could become a $2.50 - $3.50 card. Its floor is being held up by Modern demand, so if Bant Spirits and Humans decide it's not worth a slot in the future, expect the card's value to plummet. 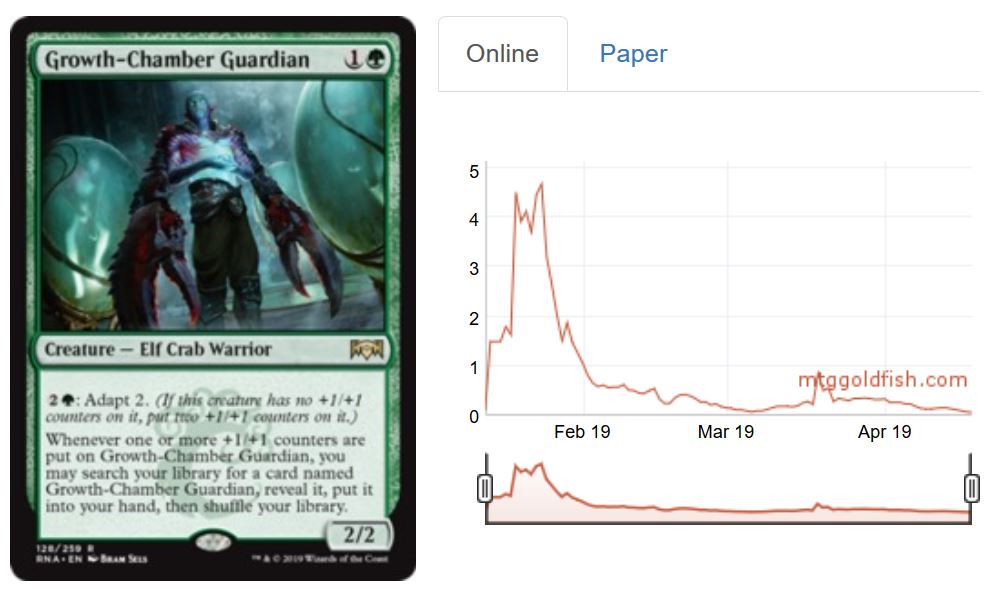 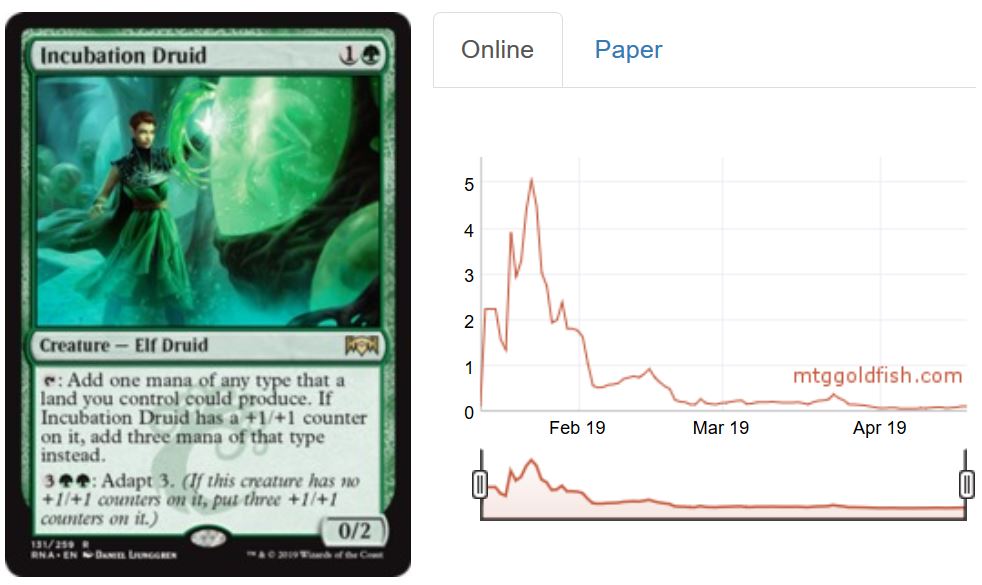 These green two-drops are both powerful cards. Neither, however, has managed to emerge as clearly better than their competition for the two-drop slot in a variety of decks. Merfolk Branchwalker helps support a Wildgrowth Walker explore package; Thorn Lieutenant is great against Cry of the Carnarium; Paradise Druid will join all of these green twos in a few short weeks.

Nevertheless, depending on metagames and individual card synergies, each of these could see an increase in play, and likewise see bumps in price. Neoform is interesting with both, for example. Guardian is better than the others in Gruul Aggro, and Incubation Druid could see a home in Modern at some point.

I like both at a dime, and I could see them eclipsing $0.50 should metagames shake out a certain way. 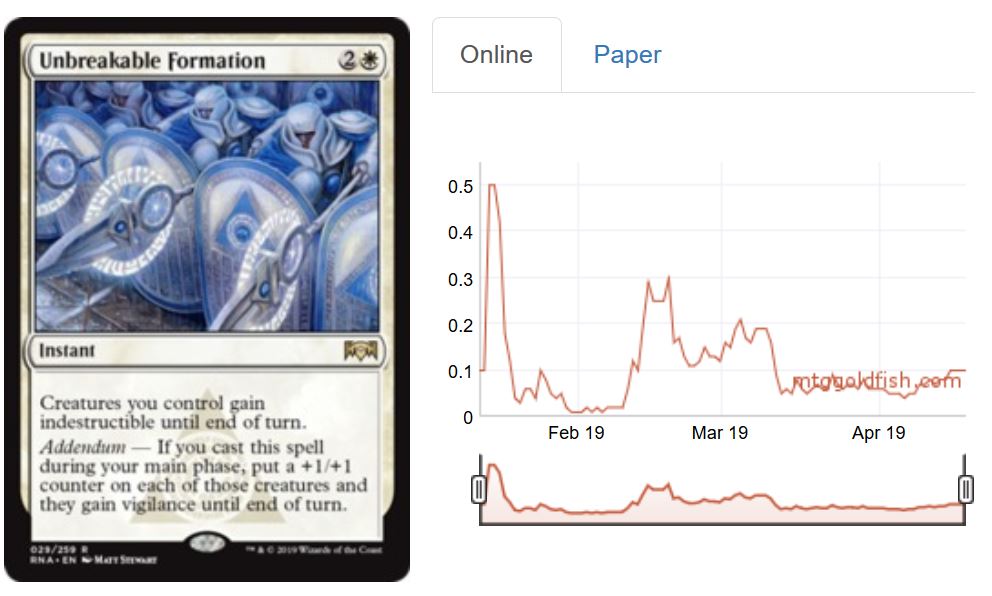 Unbreakable Formation is a powerful card; indeed, alongside Benalish Marshal, it is a main reason why White Aggro can compete with the other tier one decks of the format.

The main reason this card is not higher on this list is that most decks only run two of them, which limits its growth potential as a speculation. I suspect we would need to see a few different white aggro decks gain traction in the meta for this card to realize real gains.

Remember when Heroic Intervention skyrocketed to $2.00, though? Pepperidge Farm remembers.

Electrodominance was a card that so many were excited about, for both Standard and Modern. It has stayed above bulk thus far because it is a powerful card in a tier 2 strategy in Modern, As Foretold.

I think this card is likely not going to be good enough for Standard, but there is always an off-chance it becomes so. If Electrodominance is to double in price, more likely than not As Foretold will need to become tier 1. With Modern Horizons coming soon, who knows how Modern will be shaken up.

Rix Maadi Reveler is one of the best cards that doesn't see play in Standard—that's because no midrange deck in the format uses Rakdos colors. What Reveler needs to be successful is for a Jund or Grixis midrange deck to become tier one, in which case it would be the premier two-drop available in this shell.

Given the love that Grixis is getting in War of the Spark, I'm optimistic about its chances to find a place in the metagame. If it does, I'd expect Reveler's price to rise between $0.25 and $0.50.

The Ravnica shocklands will be incredibly important for Standard mana bases for the next year and a half. Traditionally, important land cycles like this always go up after their sets have been drafted.

Given the large supply of these lands from previous printings plus a reduced overall digital demand, I'm not entirely confident that these lands will go up in price. The risk is low, though, and they are all quite low right now.

At minimum I'd say that you should buy your playsets now. The key to speculating on them might reside in your ability to pick unpopular color combinations that could see increased play in the future. My eyes are on Blood Crypt, as I think Mardu Aristocrats and Grixis Control could both become players in this upcoming Standard. 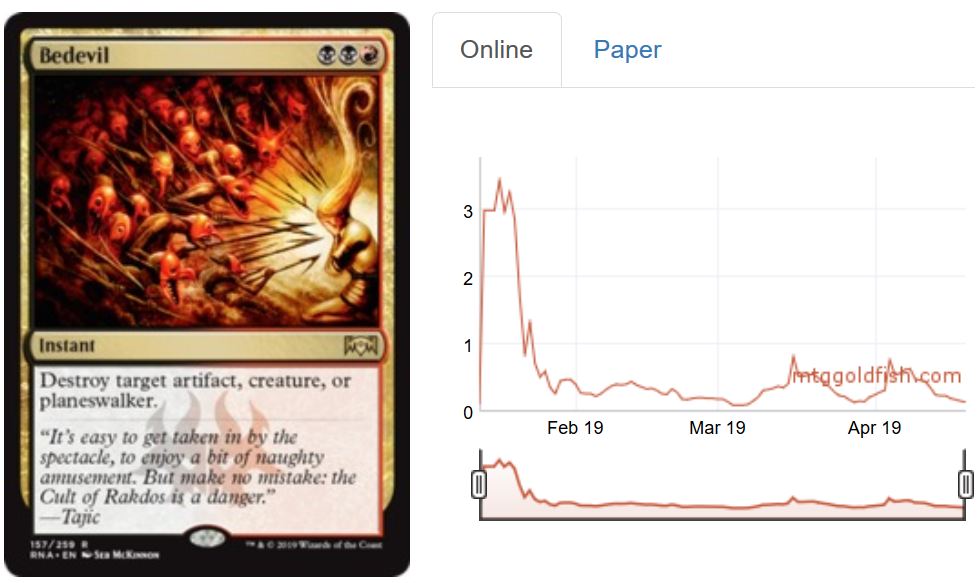 Despite Theros flooding the market with Hero's Downfall as if straight of out Genesis 7, Hero's Downfall generally held steady between $2.00 and $4.00 during Theros-Khans Standard. Bedevil has settled slightly above bulk because Rakdos as a color combination has found no home in the Standard metagame. I expect that to change after WAR releases, and of course who knows what the Standard landscape next rotation will bring.

I'm going to buy some now, and if we get no replacement for Vraska's Contempt in the upcoming sets, I'll likely double down before rotation. Low risk modest reward. Two colors limits its potential.

Cindervines has surprised me. It sees extensive play in Legacy and Modern, where it can punish Delver and Storm strategies in addition to its ostentatious function of hating on artifacts and enchantments. It is thus the very definition of a good sideboard card: cheap, potent, and effective against multiple styles of deck.

What's holding the card down is that it hasn't seen significant amounts of Standard play. Currently it is a mainstay in Gruul Aggro, and earlier this year some mono-green and mono-red decks were splashing specifically for this card.

Like Destructive Revelry before it, Cindervines is a premier sideboard tool that players will choose over lesser artifact and enchantment hate while its legal. I believe it's likely the card will rise modestly to $1.50 or $1.75. If Standard breaks a certain way, I could see it rise up to $2.00 or even $2.50.

Like Growth-Chamber Guardian and Incubation Druid, Tithe Taker is competing with a host of two-drop threats for spots in both tier-one (White Aggro) and tier two (Selesnya and Azorius Aggro) decks. Tithe Taker has, however, managed to stay above bulk the entirety of its time in the main draft set, indicating that it is a step above most other white twos and can see play in a variety of strategies.

Its main weakness is a real weakness—it gets no benefit against Cry of the Carnarium—but I think it has the chops to rise to $0.50 or $1.00 over the coming months.

Thank you for reading. There's very little daylight between #1 through #3, hence why they all share the same rating.

In a few days I'll publish my financial power rankings for the uncommons of Ravnica Allegiance. Don't worry—there will be some As and Bs there. The grades for these rares are lower than usual simply because of the increased uncertainty that MTGO has experienced since late last year.

Please leave your comments down below or in the QS Discord. Until next time, good luck and have fun in your games!