Modern Horizons spoiler season has been pulling a lot of our attention toward Commander and Modern. Looking past the hot new spoilers, we're seeing a new format emerge in Oathbreaker, and it's got a lot of people interested.

For those not familiar, Oathbreaker is a singleton, non-sanctioned format similar to but distinctly different from Commander. Featuring a planeswalker as your general and a Signature Spell to accompany it, players construct a 60 card deck to face off in a multiplayer setting. Here are some of the quick rules for those who are unfamiliar:

Keeping this in mind, we've got a lot of community buzz across the Magic sphere of social media, with even the likes of The Professor espousing his love for the format and the gameplay experiences it provides. With a ton of optics on the format right now, I wholly believe it is worth taking a minute to examine Oathbreaker as a legitimate format that people are definitely playing.

Oathbreaker was developed near the beginning of 2017, and has been extensively tested since its inception, according to the creators of the format over at Weirdcards.org. The premise of the format was taking a game of Commander, speeding up the rate of play, and shortening game length so that matches could fit into a lunch break of an hour or less. CEDH games can be over as early as turn four, but not every game of Commander has that speed.

With the team of developers bringing their format to Grand Prix (later MagicFests) and local game stores in their area of Rochester, Minnesota, Oathbreaker draws closer to being an established format, albeit one without official WoTC support. Though it doesn't have the support of Wizards officially, there is still an organizational body supporting the format. A unique facet of Oathbreaker is the support and community building being spearheaded by the charitable organizations MagiKids and Weirdcards.

Weirdcards started as an organization intent on raising money for local charities through Magic, and eventually led to them registering as a 501(c)(7) charity. MagiKids extends this mission even further as a 501(c)(3) charity.

You can find plenty more information on their organization's activities in the links above, but it's time to get into the heart of the matter, and the main question at hand: Is Oathbreaker worth my time, or is it just a flash-in-the-pan format?

Oathbreaker is definitely a grassroots format. Although it is not yet an officially sanctioned format, it is fully supported by the Weirdcards nonprofit (and slated to be featured at every US MagicFest starting in June). It is worth mentioning that Commander (formerly known as Elder Dragon Highlander) was once in the same situation, just a format for players looking to have a fun multiplayer experience with their homebrew game type. If players want to adopt a format, they'll do so by dedicating their time and energy into making it happen. However, there are a few formats that were considered failed experiments or cash-grabs that leave many people skeptical. 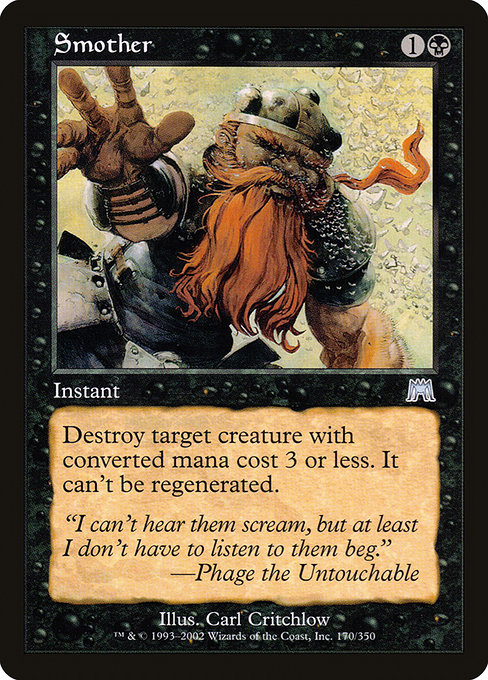 Tiny Leaders, a similar Commander variant, was developed with the intention of playing a flavorful format based around legendary creatures and spells that cost three or less mana to cast. It had a really strong start and many players (including myself) were excited to dive into the format and give it a shot, but the gameplay became centered around a very small group of cards. It was dubbed Legacy Lite by a lot of people who had played it and also suffered from a poorly maintained banlist. This more than any other format leaves a bad taste in player's mouths from a gameplay perspective. Then there's the comparison of Frontier.

Frontier was a one-on-one format that acted as a new Modern, where anything from Magic 2015 onward was legal for play. It was originally developed as a way for many Japanese stores to sell singles that had crashed in price from rotation around the time of Khans of Tarkir, and had very little regulation in regards to gameplay and balance. While it was nice getting more use out of your newly rotated cards, this format was very short-lived. Many players grew weary of losing to Siege Rhino.dek, Jeskai Black, or Rally the Ancestors piles for the umpteenth time, just like the Standard that spawned them promised. Given time and care, this format could have been adopted to great success but is now considered as little more than a cash-grab.

Finally, we have the close comparison of Brawl, the Wizards supported format that mirrors Commander but only allows you to use cards currently legal in Standard. Brawl is still active as a format and is supported on official platforms like MTGO and Arena, but isn't exactly popular. Many were burned by the ubiquity of The Scarab God during the first season of Brawl's lifespan, and most players did not pick the format back up for the release of Dominaria for the format's first rotation.

Why Oathbreaker May Be Different

With the track record of failure for those three formats setting a precedent, why would you risk getting burned again? What makes Oathbreaker any different?

In my opinion, Oathbreaker has a stronger leg to stand on than the previously mentioned formats for a few good reasons:

There is a budding community behind this format that is willing to play and support it, and what other format has a charitable organization to back it up? Now, I'll have to restate, this is just my opinion. Oathbreaker's popularity is at an all-time high right now due to factors like the recent release of War of the Spark, and Modern Horizons upcoming release, but the true test will be how long that hype can sustain into the end of the year.

Now that I've gone on far too long about why I think this format is legitimate, there is also the question of its financial implications. As we've seen so many times during Modern Horizons spoiler season, a newly printed card can move the needle on several others due to speculative Commander demand. This has never been so prominent before, as many Insiders in our Discord have noted, but has been a relevant factor in the price of many cards over the past decade. 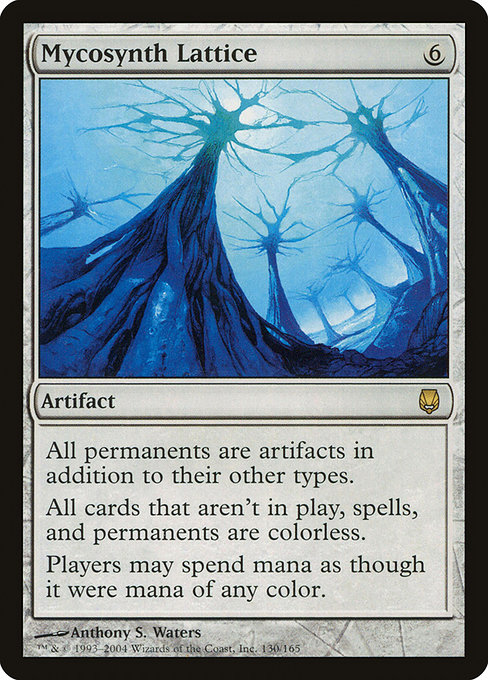 The printing of War of the Spark brought us planeswalkers with static abilities attached to them, which caused a lot of cards to move up in price. Synergies like Karn, the Great Creator and Mycosynth Lattice proved to be incredibly powerful and game-winning effects, causing a lot of players to move on Lattice for formats like Modern and Legacy. The card is still quite expensive at nearly $60, considering the price had been at a historical low of $8 due to its Battlebond printing in April of last year. This particular combo doesn't fly in Oathbreaker, as there is no sideboard, but I'll use it as an example of static abilities causing obvious combos. 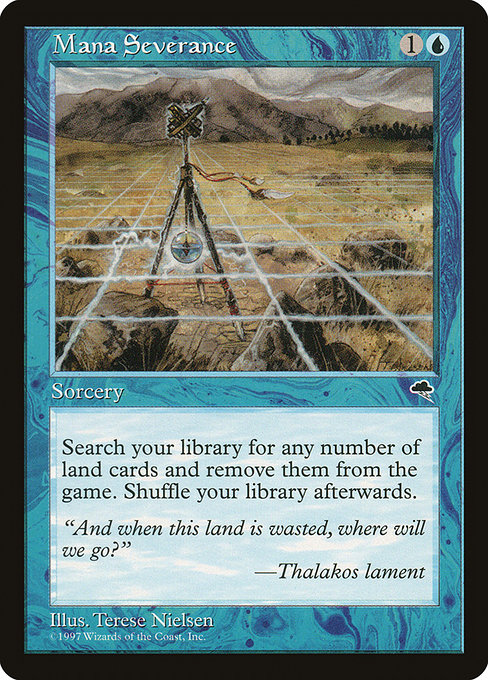 If there's any one card I could point to as evidence for Oathbreaker causing some price movement, I think it's Mana Severance. It's a bit of a meme at this point, but the obvious synergy with Jace, Wielder of Mysteries is relevant and can win you the game very quickly. 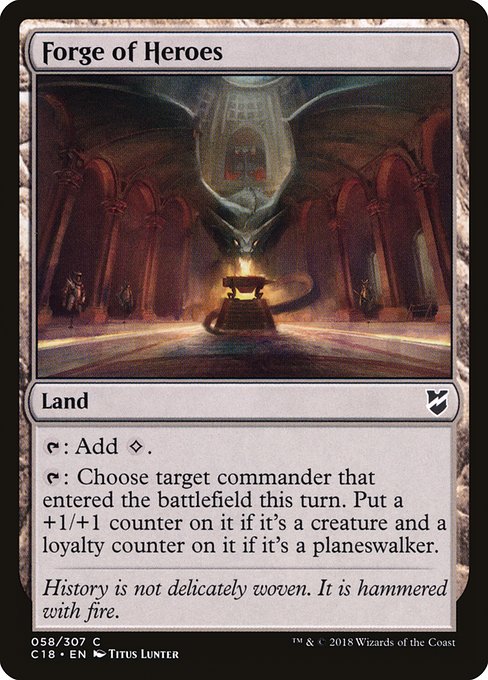 A callout for a very strong card on the QS Insider Cast, which may prove to be a staple in the format going forward, is Forge of Heroes. There's not all that much movement on it yet, though people have started to take notice of the card and are picking them up for their decks. This natural demand is healthy for the format, and will likely not lead to any buyouts for a high-supply Commander common. 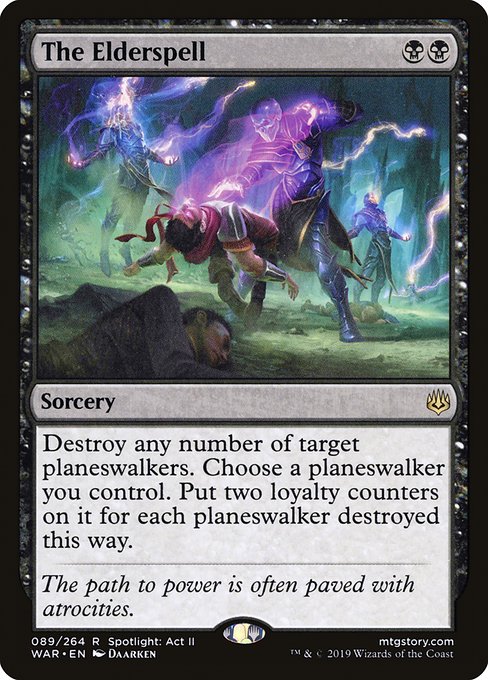 If you want my pick for an exciting spell for the format, it's The Elderspell. This is more of a sideboard card in formats like Standard, Modern, or Legacy, but it seems like it would be very strong in a format where everyone wants to play and utilize their walkers to help them win the game. As is the case with Forge of Heroes, trying to buy out a card like this with such a high-supply will likely prove unsuccessful.

Going forward, I think there will be spell synergies that will be obvious pairings with each new walker, and that will inevitably put some pressure on those spells. Competitive-minded players will find the best combinations, which will lead some to attempt buyouts if the format continues to grow. However, I think the amount of pressure really depends on whether or not we continue to see static abilities on planeswalkers in future sets, and their potential for game-winning combos.

On the topic of price movement, I feel it is necessary to bring up the fact that charity is woven into the fabric of the format of Oathbreaker. Should Oathbreaker prove it has staying power, people will inevitably attempt to speculate on Oathbreaker related cards. There is no governing body that can prevent this from happening, but consider this: how do you feel about profiting off a format that was built on the foundation of charity? To quote our own Chaz Volpe from this week's QS Cast:

...I'd much rather just donate to the charity. I don't feel good buying into a format that was created by a charity for kids, and trying to make money off of it. I just want that to be plainly known - If you want to "invest" in this format, kick back to the charity!

I stand with Chaz on this, and I hope that many of you do too. MTG Finance's public perception and the perception of those who engage in it is currently at an all-time low. Personally, I will not be engaging in any Oathbreaker speculation for the reasons I stated above, other than maybe buying a copy of a card for myself.

Oathbreaker represents an exciting, community-driven push not seen in Magic for quite some time, and you may want to get in now if you're missing out. Full disclosure, I have not tried to the format just yet, but all the buzz has got me looking at cards and brewing up decks, and looking for players to jam games with. I'm not the only one either. It may not be as popular as something like Commander, but I think there is plenty of room for Oathbreaker to exist in the Magic sphere, and will likely start causing price movement should the format stick.

One thought on “Is Oathbreaker Built to Last?”