Some pockets of the market have become noticeably softer over the past few months. To describe this market as a buyer’s market doesn’t do justice to the deals that can be had. Some Old School and Reserved List prices, in particular, have dropped down to thresholds that players didn’t expect to see again!

But just because it’s a buyer’s market doesn’t mean one should rush out and buy cards indiscriminately. For one, some vendors haven’t embraced this new reality of lower prices, so they are now overcharging for their goods. Conversely, other vendors are flush with high-value Old School cards they can’t sell. Rather than hide their heads in the sand to wait for this pullback to end, they’re dropping their prices to attractive levels to maintain cash flow.

Their adjustment is your opportunity.

This week I’m going to share three tips on how to pick up some of these older cards opportunistically, paying lower prices and keeping more cash in your pocket.

Tip 1: Why “Below Good” Is Actually Awesome

I’m just going to come out and say it: Card Kingdom is my favorite vendor to work with. Hands down, they offer the best buy prices, competitive sell prices, great customer service, and fast turnarounds on transactions. I’ve shipped buylists to them numbering in three digits and I’ll ship them many more in the future.

But Cardkingdom.com is not where I’ve found the best deals from Card Kingdom. Instead, I’ve done my best deal-finding by browsing Card Kingdom’s eBay page.

Why would you want to browse Card Kingdom’s eBay page rather than their actual site? Put simply, eBay is where Card Kingdom lists cards to sell that they can’t (won’t?) sell on CardKingdom.com. This includes altered cards, foreign cards, signed cards, and my personal favorite, “below good” cards.

Here’s my poorly kept secret: you know how Card Kingdom’s pricing on “good” condition Alpha, Beta, and Unlimited cards drops off significantly from higher conditions? Well, Card Kingdom extends that pricing trend to their “below good” cards, meaning the prices are very low!

Check out the Beta Sol Ring in the listing above, for example. It’s sleeve playable, and doesn’t even look that terrible. The cheapest copy listed on TCGPlayer right now is a damaged copy for $251 and change. This one could be considered damaged, but it’s on the nice side of damaged. Without pictures, I have no clue how terrible the one on TCGPlayer will be. Better yet, Card Kingdom takes offers on these below good cards—I wonder if they’d accept $220, for example. They liquidate the card, you get a sleeve playable Beta Sol Ring for a price no other store is currently willing to offer.

Tip 2: A Perplexing Move by ABUGames

Let’s stick with eBay for a moment, but shift gears away from Card Kingdom to another large online vendor: ABUGames. Much like Card Kingdom, ABUGames does most of its business through its website. I leverage ABUGames.com on a weekly basis, shipping them less liquid Old School cards for huge piles of store credit, which I in turn use to acquire Modern and Legacy staples. Mox Opal, Force of Will, and Tundra have been a few of my favorite pick-ups lately. The copies that are played or heavily played are priced more attractively than the near mint copies, so that’s what I aim for.

Also like Card Kingdom, ABUGames also has an eBay storefront.

Clearly ABUGames leverages eBay more than Card Kingdom—they have more than five times the feedback. While Card Kingdom uses eBay to sell cards they don’t have a good spot for on their website, it appears ABUGames uses it to sell…well, most anything.

On the front page of their eBay storefront, I see spindown dice, oversized Commander cards, Italian Legends cards, Duel Decks, Masterpieces, Funko Pop toys, and everything in between. For this reason, I recommend running a search for “mtg” on their store to hone in on their Magic cards.

But I wouldn’t stop there—they’ve got nearly 80,000 eBay listings for items with “mtg” in the listing title, and that’s too much to browse through. Fortunately, I have some tips on how to narrow the list down to the best deals.

First and foremost, I’d stick to their auctions (about 5% of their listings are auctions). It appears to me that they list cards at auction when they’re most interested in liquidating for cash. That means the pricing is most competitive. And when an auction goes the full seven days without a bid (which happens most of the time), then ABUGames will frequently re-list the auction again with a lower starting bid. They will even do this multiple times in order to get a card sold.

The second important tip to keep in mind is that ABUGames will accept offers on their auctions that haven’t received any bids yet. 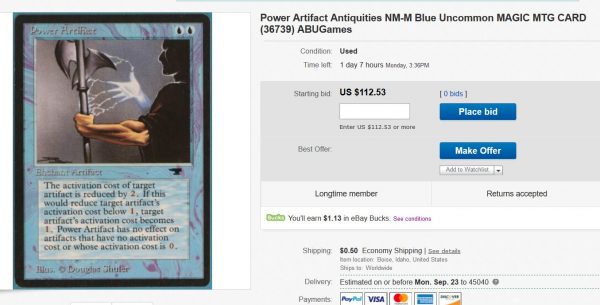 As time ticks down for the auction and no bids are placed, ABUGames may realize their listing isn’t likely to receive a bid, and they could negotiate. I’ll admit I’ve tried this a few times in the past, and in general they don’t accept offers below the starting bid price. In the example above, an offer of $100 for the near mint Power Artifact wouldn’t be accepted. But $112 may be. They haven’t gotten a bid in the auction’s first six days, so maybe they’d be content to sell it immediately at around that starting bid price. 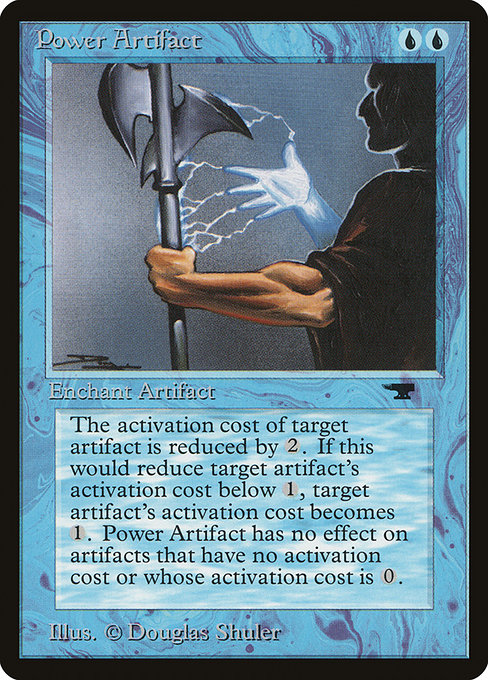 Or, if you’re feeling lucky, you could throw this card on your eBay watch list and wait for the auction to expire without a bid. Shortly thereafter, ABUGames will re-list the card with a slightly lower starting bid. In Dutch Auction style, you could wait for a price you’re happy with. It’s another great way to score deals on eBay during this time of weakened demand. Plus, sometimes you can get cards from ABUGames' eBay store for such a good deal, that you could immediately ship the card BACK to ABUGames for 50-75% higher store credit, which can in turn be used to acquire their less overpriced stock of cards. I don't make the rules, I just exploit them!

For a while, I had ignored the High-End group on Facebook—it seemed like the sales group was riddled with Masterpieces and pre-Modern booster boxes. At least, that was my perspective.

Now the Facebook group looks completely different. It’s an Old School player’s paradise—it seems every other listing is filled with Alpha, Beta, and Unlimited cards, along with Dual Lands, Power, and heavy hitters from Magic’s earliest expansions. Case in point, here’s the first post that shows up when I visited the site this morning: 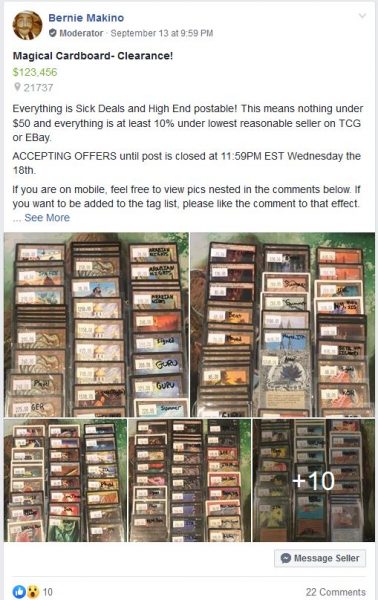 Bernie is a well-known vendor who runs Moose Loot, a Grand Prix staple. Notice anything interesting in the sale post? In this one, he’s explicitly stating his willingness to negotiate. His prices are usually already decent, but he’s willing to beat the market in order to liquidate some of this inventory. That eagerness to sell is your opportunity to acquire cards on the cheap!

This isn’t the only post filled with deals. As I browse the Facebook page, I see post after post filled with high-end Old School cards—cards that were once impossible to find at competitive prices. The market’s weakness has truly manifested itself on Facebook, and there are deals to be had if you’re willing to browse through them and purchase from individuals.

I’d recommend sticking to the major sellers, like Bernie, and you’ll receive the same great customer service as you’d get from Card Kingdom and ABUGames.

While it’s true the Magic card market is a little soft right now, especially for Old School cards, it doesn’t mean one can shop around and blindly purchase any cards; not if they’re on a budget and on the hunt for deals (and who isn’t?).

Only some vendors have embraced the current reality and decreased their prices accordingly. Card Kingdom has begun deflating their prices in response to dwindled demand, but some of the best deals can be had from their eBay store. ABUGames is another great example—the pricing on their site is as inflated as ever, but their eBay prices are far more competitive. In Dutch Auction style, you can wait for them to re-list the same auctions over and over again, continuously dropping their prices little by little, until you see a price you’re happy with.

In both eBay cases above, I encourage you to leverage the opportunity to make offers on their listings. They’re quite reasonable, and you’d be surprised with what offers they’ll accept. It doesn’t cost anything to at least try, and you just may get that deal you’re looking for.

If eBay isn’t your jam, then I’d encourage you to check out the High End Facebook page. Once a fruitless endeavor, it’s now worthwhile to window shop there looking for deals. Some fairly well-known vendors sell cards there, so you can buy from them confidently knowing the cards will be authentic and as described.

No matter who you’re buying from these days, it’s wise to make offers rather than pay sticker price directly. Vendors are overloaded with Old School cards, and may be motivated to cut down on this slow-moving inventory even if their margins suffer. Cash is king, and liquidity is absolutely critical for these larger vendors to remain healthy and in business. Therefore, this is your license to go after deals in the hopes of acquiring pieces for your decks that were once out of reach.