By now, I’ve thoroughly documented my store credit arbitrage process using ABUGames. For over a year, ABUGames had offered elevated multipliers when receiving trade credit for buylists. The numbers were especially attractive when shipping them Old School cards ranging from Alpha to Arabian Nights.

I wrote about how one could purchase cards from other sites such as TCGPlayer and eBay (sometimes even from ABUGames’ eBay store) and ship them to ABUGames’ buylist for double the store credit. This credit could then be spent on their least overpriced cards, netting a modest, yet reliable profit.

Now it looks like ABUGames has taken measures to severely limit these opportunities. Because of their recent, drastic moves, I want to spend this week sharing my impression of their changes and how I’m still trying my best to leverage this strategy to make a little more money.

In short, ABUGames has modified their grading system as follows:

So there are still four levels of condition (especially on the older cards) but now cards will either be mint, near mint, played, or heavily played. This grading system is reminiscent of Hareruya, who I’ve also seen use a system with Mint, NM+, NM-, etc. on their high-end cards.

At face value, this sounds like a long-overdue change. I’m tired of acquiring “near mint” cards from ABUGames, only to receive slightly played copies that wouldn’t be graded as “near mint” by any other vendor. Now if I want to be assured my copy will be “near mint”, I can purchase their “mint” copies. Collectors will be especially pleased with this update. After all, does this "near mint" Transmute Artifact look near mint to you? No thanks. 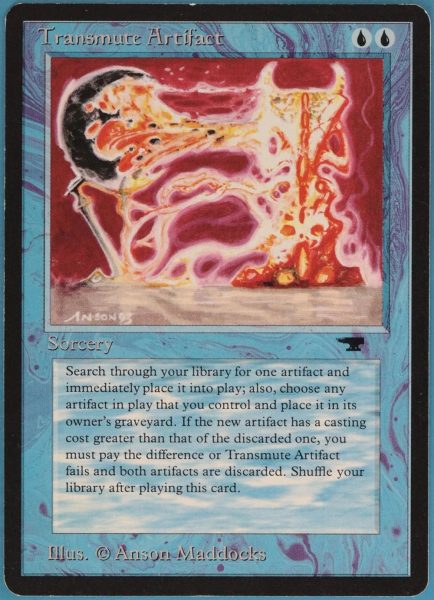 Unfortunately, there are also financial implications to this change. It used to be that a near mint card would get you the high premium offered by ABUGames. Often times the near mint grade would net you the most profits. Now that value is relegated to the “mint” grading.

Because the drop-off from mint to near mint can be sizable, I am no longer motivated to purchase near mint cards to flip for trade credit. The risk of downgrade to near mint is too great, and profits can immediately be erased if I planned on receiving $300 in trade credit for a card, only to instead receive 80% of that.

In addition, I’m nervous about shipping SP cards as near mint out of fear for downgrade to played condition. It used to be that I was fairly confident when shipping a slightly played card for trade credit. Now, if there’s a little bit too much wear, the card could be downgraded to played with no in-between. And looking at ABU’s grading guide, a scratch and a couple edge nicks relegate the card to “played”. This is a very fine line ABUGames is going to walk.

The party is over. The dream is nearly dead. While ABUGames offered inflated trade credit on even the most unplayable Old School cards, profiting from credit arbitrage was like shooting fish in a barrel. The price declines are pretty much all-inclusive and across the board, but here are a couple examples.

Two months ago I submitted a trade-in to ABUGames and received $285 in singles credit for a heavily played Alpha Juggernaut. Today that same card would net me $237.50 in credit. 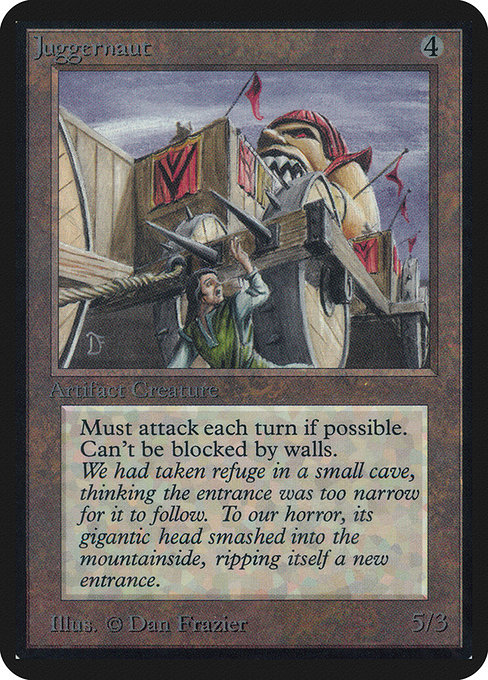 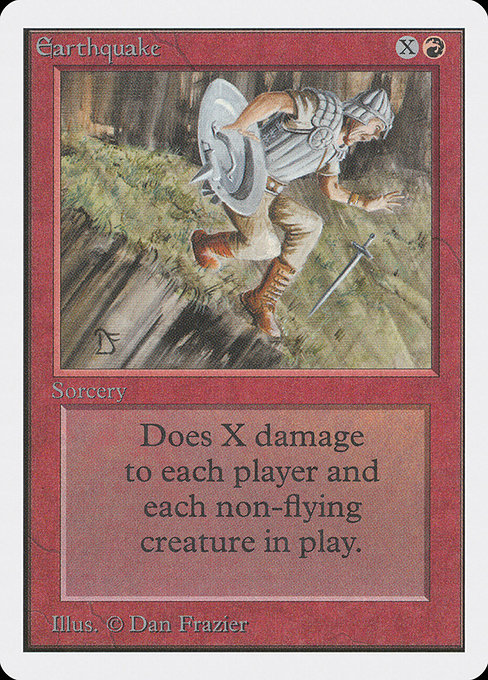 These decreases do not indicate that ABUGames has suddenly become greedier, or that they are necessarily having liquidity issues. I wouldn’t read that deeply into this trend. Instead, I believe this is simply an adjustment to reflect the softness in the Old School market. At one point these cards were overheated, and players and speculators alike were buying aggressively. Now the market has cooled significantly, and these cards are now rotting in vendors’ inventories.

Then again, I just checked and I see ABUGames has only 5 Unlimited Earthquakes in stock (3 HP and 2 Mint). And they’re not likely to take many new copies in offering such a low buy price on the card. So maybe these price drops do reflect something deeper? One can only speculate!

Remember their 55% drop in Unlimited Earthquake? Well, that drop is also reflected in their sell prices! In fact, you can acquire a heavily played copy for $23.09 from ABUGames. Is that a good price? Well, Card Kingdom has 0 Good copies in stock, but if they did their price would be $17.20. So while obviously $23.09 is a premium, it’s a modest one.

ABUGames has near mint copies of Jihad in stock with a price tag of $139.99. Card Kingdom’s near mint price is $109.99. But remember, “near mint” could mean “slightly played”—this is a good demonstration of why the new grading system can be tricky. Still, this used to be a card that ABUGames would charge 2x the price for vs. the rest of the market. Now their pricing is much closer to reasonable.

That brings me to the ultimate question: can ABU trade credit still be had at 50-60%? If so, there’s a great deal of profit to be had. In fact, the options for cashing out trade credit used to be thin and difficult to find. Now there are many ways to cash out trade credit for profit…if you can still acquire any at the deep discount that used to be readily available.

Because ABUGames has dropped their trade numbers so much, the opportunities to grind out credit at a steep discount are far reduced. It’s like the challenge to ABUGames arbitrage has been reversed. It used to be easy to acquire credit and difficult to spend it profitably. Now it’s easy to spend credit but difficult to acquire it profitably.

In the long run, this adjustment will greatly reduce the trade credit inflation problem that has been plaguing ABUGames for the past couple years. Suddenly, $100 in ABUGames store credit is worth more than $50 or $55. Even $60 may be an attractive price for $100 in-store credit. Could we actually be seeing the value of the ABU buck appreciate? It’s a real possibility, and something worth monitoring going forward.

I want to wrap up this week by touching briefly on the newest challenge: acquiring ABU credit. If you’re convinced (as I am) that the ABU buck stretches farther than it did before, you may be interested in trying to find some discounted ABU trade credit. Fortunately, I have a couple ideas to share.

First, you could try to purchase the credit directly from others. Back when ABU credit was easily acquired on the cheap, it seemed like no one wanted the inflated currency. Even though things have been changing, there may be a lingering effect whereby ABU credit can still be acquired at a steep discount. If you find folks selling their ABUGames trade credit on social media at a 50-60% rate, you may consider jumping on the opportunity.

If that doesn’t work, do not despair. There is still one other way to acquire cheap credit, although it’s more time consuming: you can browse TCGPlayer, Card Kingdom, and Cool Stuff Inc for cards to flip for 2x the trade credit. I’d recommend sticking to played and heavily played stuff to avoid disagreements on what is “mint” versus what is “near mint”. The opportunities are greatly reduced, but they’re still out there.

Recently I made a $100 purchase from Cool Stuff Inc’s website—I grabbed a couple Old School cards that could be flipped to ABUGames for roughly 2x in trade credit. Included was a heavily played Unlimited Fork for $19.99. ABUGames offers $40 in trade credit for HP copies of the card. 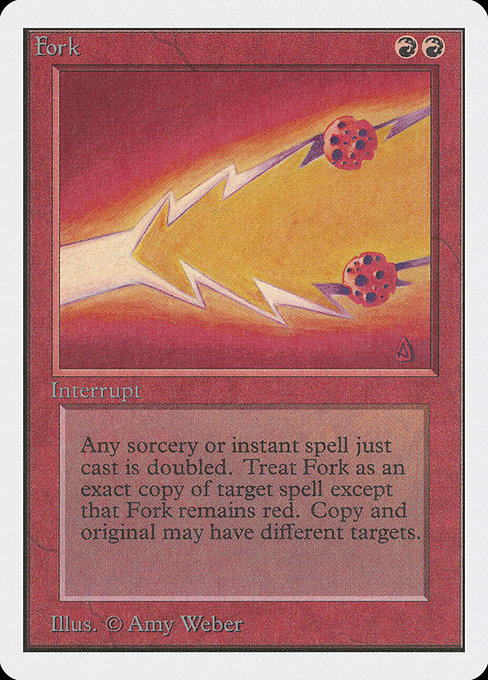 The opportunities are out there, if you’re willing to put in the work. This kind of grind isn’t for everyone; some people shiver at the thought of browsing sites endlessly, comparing prices with ABUGames’ trade credit numbers. Personally, I find the practice relaxing in some ways. Even when I fail to find a deal, I still feel encouraged knowing the possibilities to profit are out there, for the taking, if I’m willing to put some time into it.