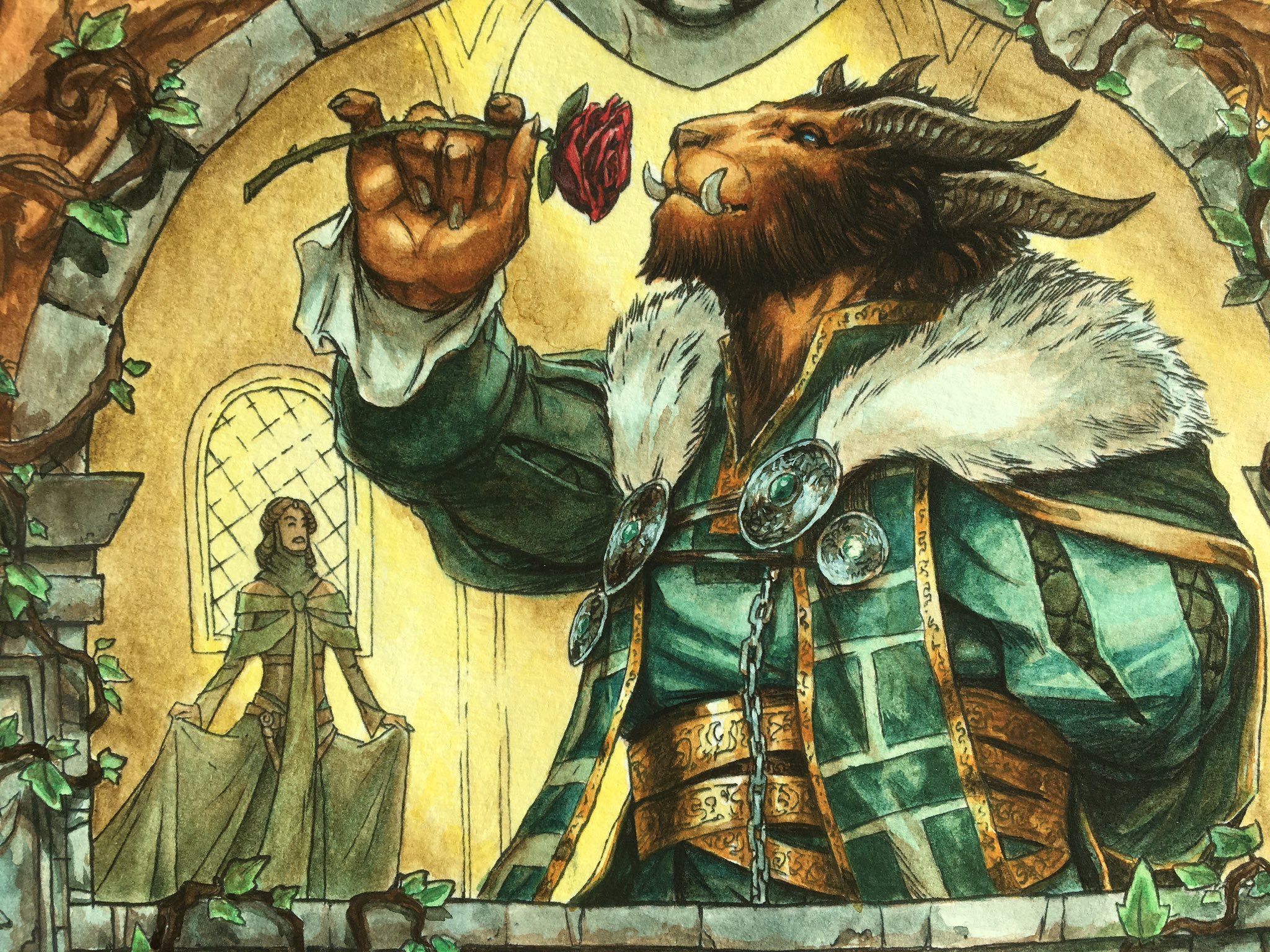 Welcome, everyone to another week and some more specs! Today we are looking at a creature that I feel should be worth more than their current price tags are suggesting. The focus of today will be a big body with great upside, Lovestruck Beast // Heart's Desire! I hope by the end of this article you may have a different feel on this gem. 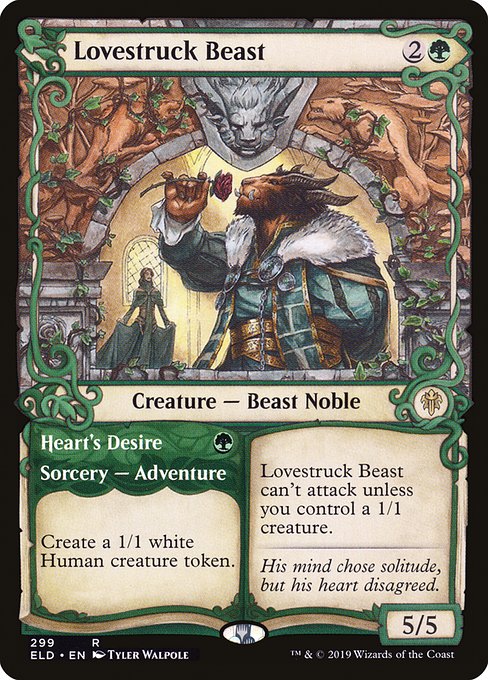 Let’s talk about Lovestruck Beast // Heart's Desire and why this one is up for discussion. To start with this thing is only going for $0.59 avg. (TCGplayer mid), the foil is at $1.22, and the prerelease is at $1.50. The tricky thing about this and newer sets going forward is the “extras” in these things. The showcase version is $1.50, and the foil is at $3.41.

This sparks up a topic we will touch on after we discuss Lovestruck Beast // Heart's Desire. Now you may be asking yourself “with all of these prints, which one do I target?” This isn’t as easy of an answer as one would think, and we will investigate this further. For now, targeting the non-foil is the safest bet out of all. If you are looking into the foils, I would go with the prerelease and the alternate art foils to spec.

The reason being is that Commander drives a lot of foils trends. We also know Commander players typically want to sleeve up what will be rarer or flashier to have on hand. With that, I feel they would target the alternate foils first, and then the original foils last if at all. As for the reason for non-foils, that will be primarily where our budget minded players will go to acquire this. They will look at all the copies and think to themselves, “why pay more for fancy art when all I want to do is play the card?” This will essentially drive the cost for the non-foil if this pops up the way it should. 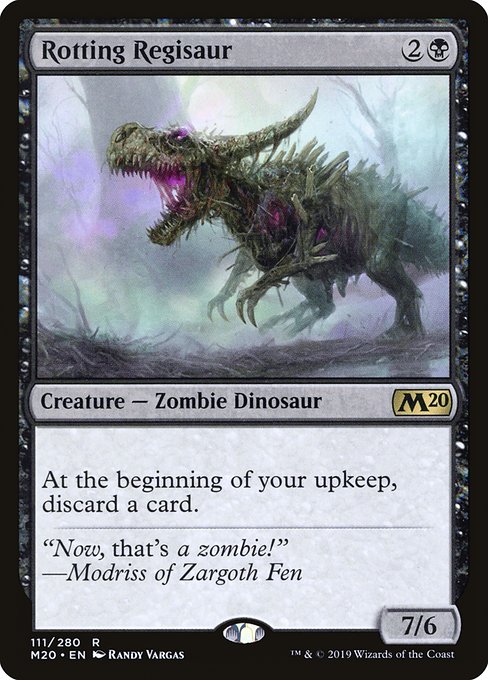 Now, we are going to investigate further as to why this should go up in price. The first thing we will do is compare it to a card with similar upside and CMC. The card we are talking about is Rotting Regisaur. Rotting Regisaur is coming in at $3.19 avg for non-foils, $5.00 for the foils, and $5.33 for the promo. The first thing you may say to this is, “well that’s because there’s only three prints for this, and the beast has five.” That is a solid argument, but the counterargument here is tournament play.

Looking at top eight decks alone(Pioneer), Rotting Regisaur is sitting at twenty-two decks(mtgtop8). Lovestruck Beast // Heart's Desire on the other hand is at one hundred and two. In Standard, the Regisaur is at eighty-five, and the beast is at one hundred ninety-three. The driving force here for Regisaur might be in Commander, where it sees play in seven hundred twenty-nine(EDHREC). Whereas Lovestruck Beast // Heart's Desire is sitting in at one hundred ninety-one. Overall the competitive meta should be the biggest driving force for a card, and the beast is in a lot of meta decks.

Other Factors to Consider

Another thing to look at is the number of copies used. Lovestruck Beast // Heart's Desire is almost a four-of in every deck it is in. With a drive like this, it leaves one scratching their head thinking “why is the price so low then?” I don’t have a complete answer, but the number of printings has an impact for sure. The other thing to note with the beast is versatility, as it has the Adventure component to make a 1/1 beater.

This helps not only to help it to be able to attack, but also use for any ETB effects, cards that get/give buffs for creatures on the battlefield, and cards that get triggered for every sorcery/instant you play. The last thing we will note here is the fact it’s a 5/5. Yes, it is a vanilla 5/5, but it’s a 5/5 for 3-cmc! It does have the restriction, but we are not dumb players, and this means very little to us in the right situation.

In closing on this there is no reason the non-foils shouldn’t be least a dollar more than Rotting Regisaur based on the facts provided. We will see what happens with it in the future, but this looks to have found a home in Pioneer. That in of itself should put minds at ease wondering if it will be used post rotation. Grabbing non-foils for just over a quarter on Card Kingdom right now doesn’t seem like to bad of an idea.

Let’s talk about the elephant in the room which is the “extras” Wizards keeps throwing at us now. This topic deserves its own article, but I'll give a brief opinion here. Personally, I hate it from a speculation standpoint, as it most certainly has a negative impact on original art foils in the secondary market. As stated above,  why would a player buy an original art foil, when they can buy an alternate art or alternate art foil? At this point, in newer sets, plain foils are not really the go-to spec and have far lower demand. Reason being is that stores won’t give you as much to buy-list, and players (Commander players, anyway) will look for a different version to drop cash on.

Prerelease promos will be the safest foil spec, as it should have the lower print run in comparison to its original foil counterpart. The biggest reason as to why is buy-listing. This was mentioned in a previous article, but it is worth noting here.

Overall, when it comes to the extra versions Wizards is putting out, it hurts the secondary market. It is not up to them to protect the market, it was just a shot in its foot. It was a smart move for them to draw intrigue for potential buyers of sealed product. They have seen the success of artists alters and extended art cards, and ran with it. The problem is now any one card will have too many printings. It will take some time to truly see what to target going forward and keep a watchful eye. I hope you all enjoyed this week’s article, and I hope you come back for the next one!