Welcome back everyone to another week and another article! Today is our third installment going over some lower cmc cards to utilize in Pioneer, or ones that have long-term potential. Last week we went over three cards that look solid for the format.

Blossoming Defense with room to blossom 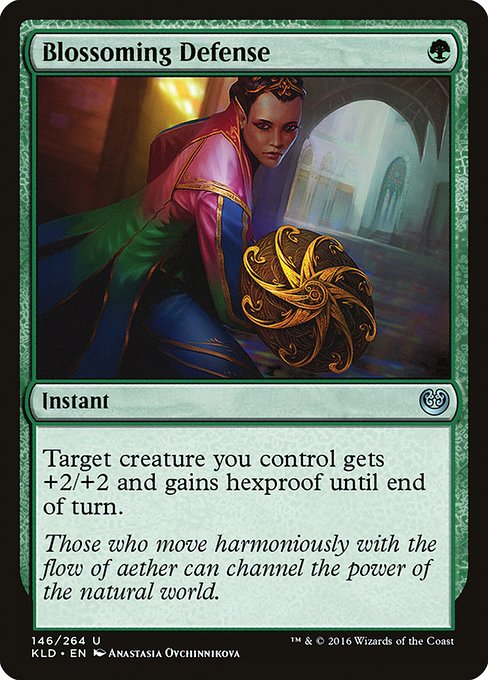 The first one we are going to discuss is a budget staple and has room to grow in the non-foil print. The card we are talking about is Blossoming Defense. This is literally the “nope” to any target creature spell. There is no better satisfaction than to nullify a three drop by tapping for one! The other thing to note here is that the creature we target gets a 2/2 buff. There are a couple cards from Core Set 2021 that can benefit heavily from this, but we will touch on that in a later article! The instant aspect here is what makes this so versatile, as we can use it defensively or offensively.

The current price tag on this is $0.24 for the non-foils and $3.05 for the foils. One thing to note is as of now there are no other printings of this, and for speculating that is fantastic! Secondly, the non-foil over time has more than enough leverage to pull over the $1.00 range if the foil stays at its current price. If the foil continues to grow, then this helps raise the ceiling on the non-foil copies like Fatal Push. One could argue that Fatal Push is going for $3.75 for non-foils, and it is used in other formats. How can we then say this could grow potentially to that point? The answer is one that was touched on in a previous article, total printings.

Right now, Fatal Push has a total of four different printings, one being an FNM promo. With Blossoming Defense only having two available, it has less in total circulation. If this trend stays the course Blossoming Defense has an edge.

Get more dominant with Display of Dominance and Quickling 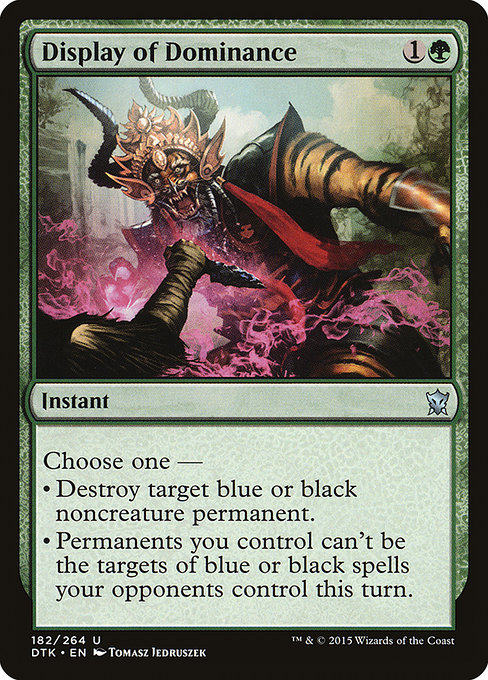 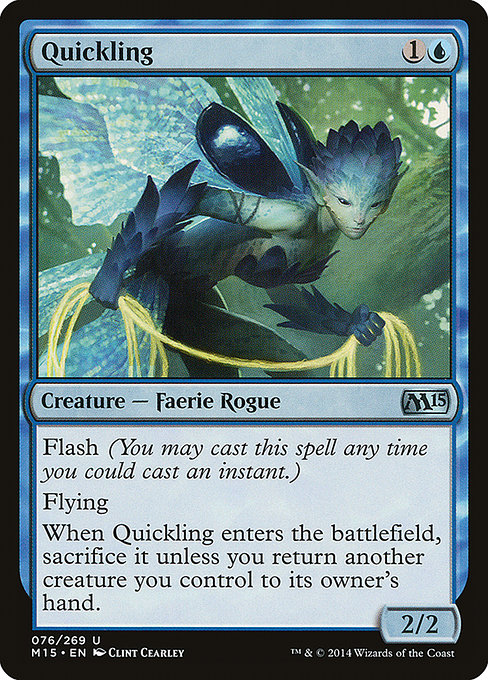 Staying on course with green “nope” spells we must discuss Display of Dominance. This is a solid two drop with options with removal or protection. At first glance it being narrow with “target non-creature permanent” seems unappealing. Keep an open mind on this as there are plenty of non-creature threats in black and blue builds. This is just the secondary use, so keep that in mind. What we primarily want to do is use the ability to give our permanents hexproof from blue and black spells. Like Blossoming Defense, nothing will aggravate a control player more than you not allowing them to remove your plays. Let them go ahead and play that removal spell, you tap for two, and “nope” them in response.

Display of Dominance’s price is currently at $0.25 for the non-foils and $1.29 for the foil copies. This card did in fact pop back in January, but the current price is a bargain! There are four color combinations that are in the competitive meta where this can be a factor. Mono Black aggro, Spirit aggro, Mono Green, and Gruul aggro. Mono Green and Gruul is where we can at the minimum sideboard this in for defense. Mono Black aggro and Spirits aggro will have target spells that we can negate using this. Outside of Spirits and Mono Black, there are other control decks that could be a threat to Gruul and Mono Green. This is one to pick up while the price is low!

Quickling is our next card that is flying (literally and figuratively) under the radar. The current price is at $0.33 for non-foils and $2.37 for the foils. Both versions have room to grow, but the non-foil is where our upside lies. This can be used as a complementary piece to decks that not only utilize flyers but anything looking for sneaky defensive ways to counter target creature spells. The power and toughness being 2/2 is rather intriguing for it the text this one holds it would be a 1/1 given the mana cost and rarity. Long term, this could see the $1.00-$2.00 range for the non-foil copies without a reprint. Be sure to snag up some playsets of both copies of this awesome card!

The last card we are going to discuss today in not a two or one-drop but deserves to be mentioned for the format. Frontline Medic is a great three-drop that can be used in a slew of white builds for defensive measures. Just in aggro alone this can be used in White Weenies, Boros Aggro, Spirit Aggro, Sram Aggro, and Abzan Aggro. Those decks as of right now make up 19% of the competitive meta, and a card like this potentially bolsters them up more! Giving your creatures indestructible when attacking can drive players crazy if they have no response. Not to mention the fact it can counter a spell if the play is available! Some critics feel that this is a card that is not worth the play given its cmc. However, in the right build like those stated above it can be a threat.

The current price for Frontline Medic is $0.50 for the non-foils and $1.27 for the foil copies. There is a Commander 2020 reprint that is coming out with a price of $0.39. The reprint hurts the value slightly for the non-foil, but the foil will hold plenty of upside. Here is a build that could benefit from Frontline Medics ability mid-late game.

Devotion to White by E_Kaminuma

In closing, all the cards stated above have plenty of usability in the future of Pioneer. The meta is ever-changing as everyone tries to figure it out. New threats will immerge, and new answers will be found. These cards have a great chance of having a role in some way shape or form. Even if some only go up a buck or two that is still a win, especially if you buy/trade for a high quantity. Thank you for checking this out, and be sure to stop back for the next installment!