Hello, everyone, and welcome to another Magic Arena article! Last week we had a quick look on how to build a competitive deck on budget. This week, I'm going to showcase the building process of a Standard 2021 deck, together with a quick three-game video to showcase the deck on Arena!

A few days back, I was scrolling through my lands collection, thinking about the decks to play post rotation. Then, I looked at the full sets of Temple of Epiphany for a moment and tell myself - I haven't played with Izzet colors for quite some time, maybe this is a great opportunity to put something together for some games!

Speaking of blue, there are two cards that I identified as staples after rotation. 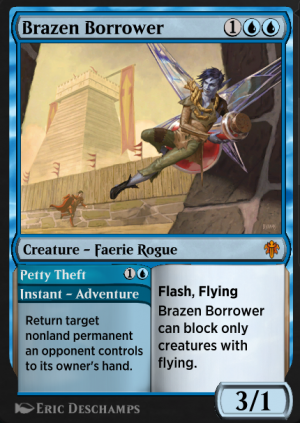 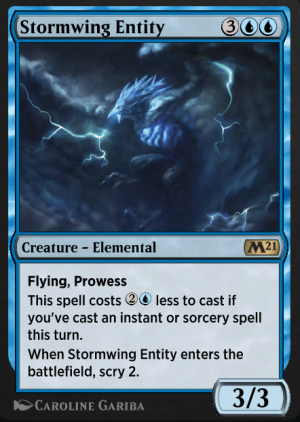 Brazen Borrower // Petty Theft is great on its own, with the adventure part of the card being an instant speed bounce spell to return something troublesome off the opponent's board. After that, this faerie card can flash in as a 3/1 flying attacker which can put in some good work on pressuring the opponent's life total! Given a  playset of Brazen Borrower // Petty Theft, I would play four copies in most of my blue decks. For the article this week, I only have access to two copies so I'll only play two, to better simulate the "building on budget" scenarios.

Another card that caught my eye is Stormwing Entity. This is a 5-cmc card from Core Set 2021 and it will become cheaper when we cast an instant or sorcery spell before it on the same turn. It makes me think of the Delver decks in Modern and Legacy; a 2-mana flyer with prowess and a scry 2 ETB trigger seems pretty good in Standard. While Eliminate would probably become one of the best removal spells in Standard, Stormwing Entity totally dodges it.

So, I started off my Izzet deck like this: 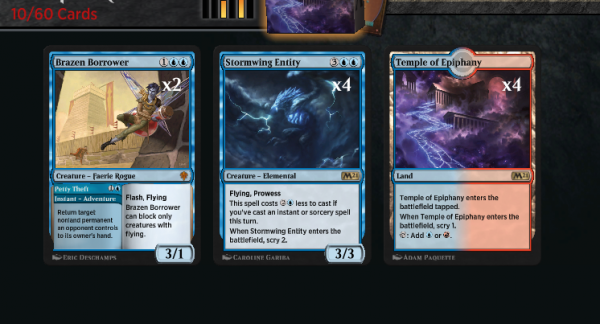 Again, this is based on my collection, you can totally change the numbers depending on what you have. As always, I wouldn't recommend you to craft cards that I showed, unless you really, really like the card. Always remember, only keep a card if you will be playing with it in the longer-term.

Since we want to maximize Stormwing Entity's potential, we want to have a lot of cheap instants or sorcery spells. Speaking of cheap, Shock and Opt quickly came to my mind. With these 1-mana spells, Stormwing can potentially become very huge and helps us close out the game faster. Opt is also very important for this deck because we don't want to include too many lands in a tempo strategy.

I then went through the collection, looking for creatures that suit the same gameplan and I found Sprite Dragon, as well as Riddleform. These two cards fit the theme pretty well, with the "cast noncreature spell" triggers, similar to Stormwing's prowess trigger. Sprite Dragon also has haste, which provides us momentum after potential sweepers or removal out of the opponent's hand. Like I said, with a bunch of cheap spells, these flyers can potentially close the game quickly.

I could have added playset of Fabled Passage, but I really want to make the deck cheapest possible. Competitive-wise, I don't want so many tapped lands in the first three turns of the game since we are on the tempo plan. In order to not draw too many lands, I decided to play 22 lands, instead of the 24 lands suggested by Arena's deckbuilding tool. Most of our cards only cost 1-3 mana anyways.

At this point, I still need another 16 cards to complete the deck. I can't play a blue deck without some Unsummon effects and counterspells! Unsummon is actually going to rotate soon, but the good news is I found a better replacement in Stern Dismissal. Instead of only bouncing creatures, Stern Dismissal is able to bounce enchantments like Banishing Light, for just one mana. Not much consideration needed! A playset of this card is exactly what we need to deal with troublesome blockers and enchantments. 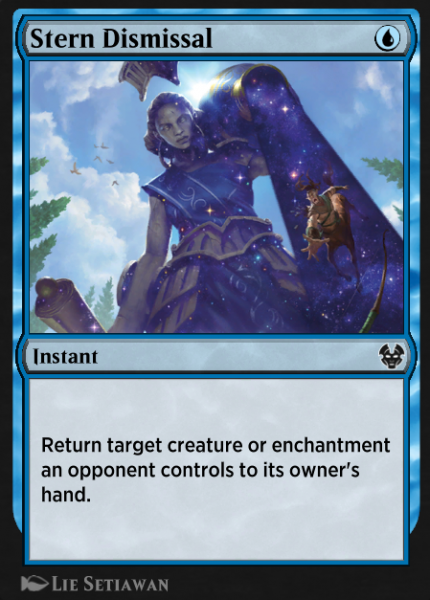 For counterspells, I did some comparison and personally think Lofty Denial fits this deck best. It becomes better when we have flying creatures in play - which is exactly what we have right now! We have a total of fourteen flyers including the Riddleforms. Riddleform will be able to help Lofty Denial because we will have a 3/3 sphinx before the counter spell resolves. 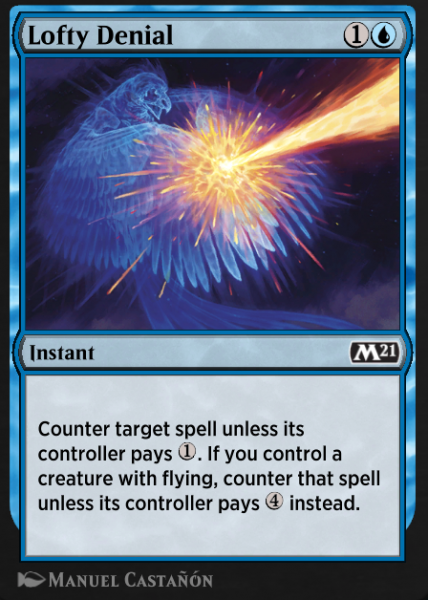 Alright, what else do we need? We are down to 8 cards.

Technically, we can simply add in 8 burn/removal spells to call it a day. But I really want to play with some cards that I would probably not touch in other decks. Then I found this card. 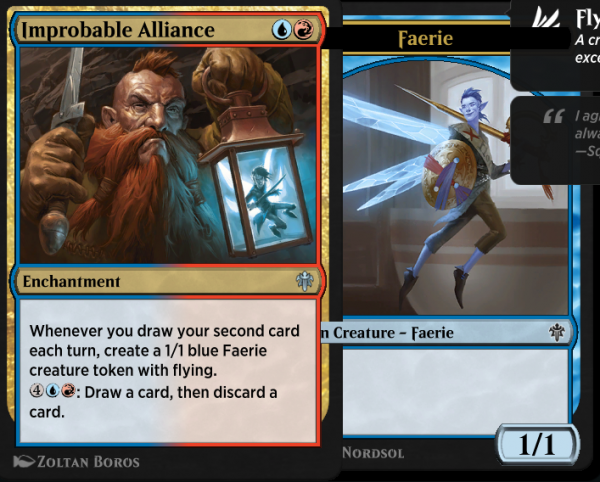 Improbable Alliance may not be the best include in this Izzet build as we don't really have that many card draw effects other than Opt. However, I see this card as land-flooding insurance: we'll be able to filter our draws, trigger Riddleform, and create 1/1 flyers. After some testing with this card (outside the video), it can sometimes smooth out draws in the late game and ultimately helps to close out stalemate situations. To make Improbable Alliance better in the early games, I've added a few Fire Prophecy as removal with the ability to potentially exchange dead cards in our hand for more useful cards.

We are almost done, but I want to add a few burn spells which can target anything so that we can play more aggressively. I ended up with two copies of Slaying Fire and a Bonecrusher Giant // Stomp. As I was about to conclude the deckbuilding, I ran into a red planeswalker from Core Set 2021... 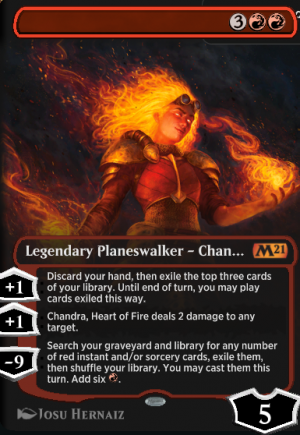 The fire in her eyes is telling me to bring her along, so I cut a random card to add her into our 60-card deck. The final build looks like this: 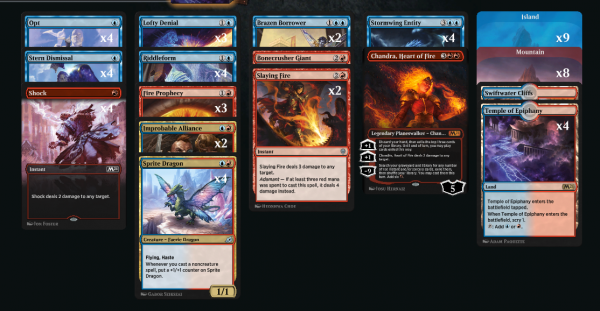 I was lucky to have won all three games in the video. If you are interested to try out the deck, I have the decklist over here. Feel free to make changes accordingly!

That's all for this week, hope you enjoy the write up as well as the video! Let me know your thoughts in the comment section below people!

Thanks for reading, and I’ll see you again next week!