Hello, everyone, and welcome to another Magic Arena article! Now that Zendikar Rising (ZNR) has been released, have you tried playing some Sealed or Draft to collect cards? In this week's article, we are going to go through a few things regarding ZNR:

As always, keep in mind that the following is written with the goal of playing Arena as budget-friendly possible.

First, let's evaluate the Mastery Pass, which can be unlocked for 3400 Gems. 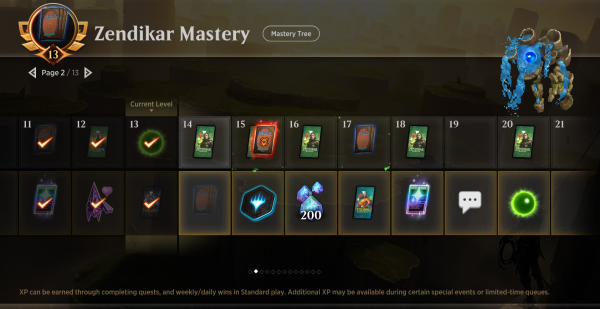 This time, the maximum level for Mastery Pass is 130, which is way higher than the one in Core Set 2021. Let me give you a quick breakdown of all Mastery Pass rewards if you reach level 130:

Let's go ahead and calculate the values of these rewards.

Now, you'll probably ask: is there enough time for me to unlock all the levels? Let me do the maths for you -
The next set will be released around January 15th, 2021. If we count the release weekends of ZNR, there are 18 weeks worth of XP to be earned. The daily quest is also renewed when ZNR update hits, which means there are roughly 120 daily quests before the next release.

If you did not miss any of the above, that's only 2.5 Levels away from completion! 2500 XP can be obtained through winning 100 games across the 18 weeks. If you do complete your weekly wins, you will get XP from the daily wins anyways, so assuming all 15 weekly wins come together with 25 XP from the daily rewards:

As Arena players know, we can have a maximum of three daily quests at a time, so we could play as few as three days each week, just to clear daily quests and get some wins along the way. If you play Arena almost every day, completing the Mastery Pass is definitely not a problem for you!

Number of Drafts to Complete the Rares Collection?

For most players, drafting is the ideal way to complete any set simply because opening pack using gems is way too expensive. There are various templates found online to calculate the number of drafts needed to complete sets, but rather than getting into complex formulas, let me share a method I used previously in M21. I maintained a spreadsheet on my draft records as shown below: 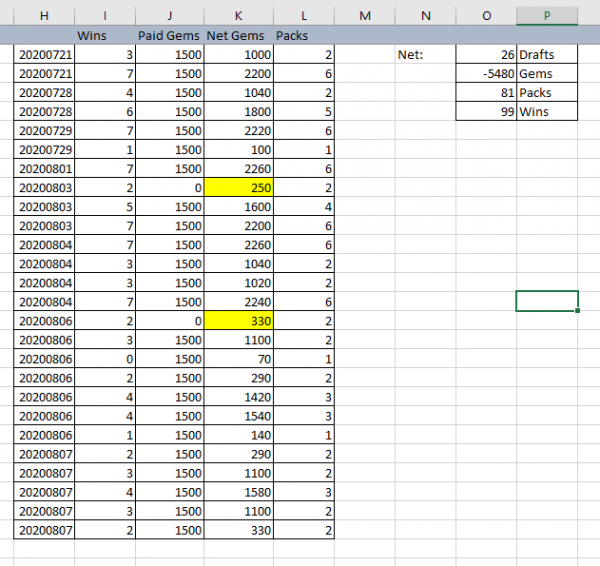 The numbers highlighted in yellow means I paid gold for that particular draft - no gem spending while "Net Gems" means the amount I earned after a given draft. These are all records from premier drafts. The reason why I choose Premier Draft instead of Quick Draft is that there's a high chance I will win more than two packs, and it only takes five wins to earn enough entry fee for the next draft, instead of six wins for Quick Draft. Of course, if you are not confident to get more than four wins per draft, Quick Draft is slightly cheaper and you'll lose fewer gems if the draft does not go well. 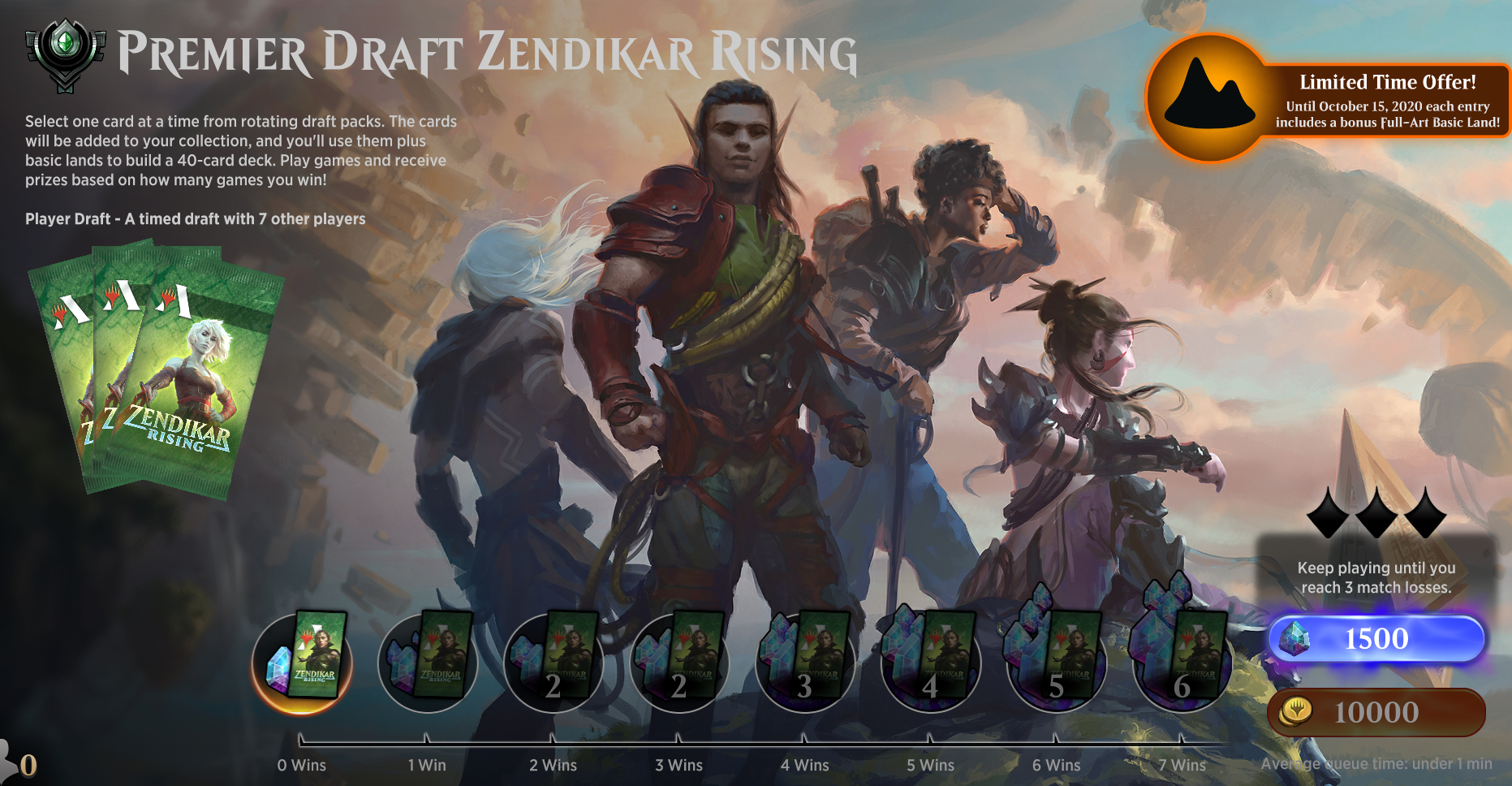 In summary, for about 5500 Gems, I got to complete 26 drafts and earned 81 packs. I did not record the number of rares picked in each draft, but let's assume I picked three rares or mythics on average. For 26 drafts, I get 78 cards so basically for these drafts, I earn about 159 rare and mythic cards (adding the 81 from packs to the 78 from drafting).

This is an easy way that you can use to track your progress and estimate the number of drafts you'll need to complete a set collection. There are 63 rares in Zendikar Rising, so assuming you keep all your wildcards, you will need roughly 300 packs, minus the number of rares you obtained through drafts.

In summary, for M21, I picked up 159 rares over the course of 26 drafts, spending a total of 5,500 gems (after accounting for prizes). If I'm able to maintain for ZNR the same win rate as I did for M21, which is about 3.8 wins per draft, in order to obtain the 285 packs I'll need to complete the much larger set that is ZNR, I'll need to do roughly 50 drafts, which should cost me approximately 11,000 gems.

So from here, I can break down those 50 drafts over the 17-week period that ZNR will be the latest Standard-legal set, which is just about three drafts per week. As per the evaluation from the previous section, we need to play three days a week minimum to complete the Mastery Pass – we can totally join a draft each of these days along with clearing our daily quests.

Alright, you're probably asking: how about the mythics? The truth is that it is extremely hard to complete a mythic playset without spending mythic wildcards. In general, I suggest picking up a mythic card during a draft if you haven't completed its playset – whether the card will help your draft deck or not! ZNR has 20 mythics, which is double that of M21, so in order to collect the majority of the orange-rarity cards, I suggest mythic-picking whenever possible. 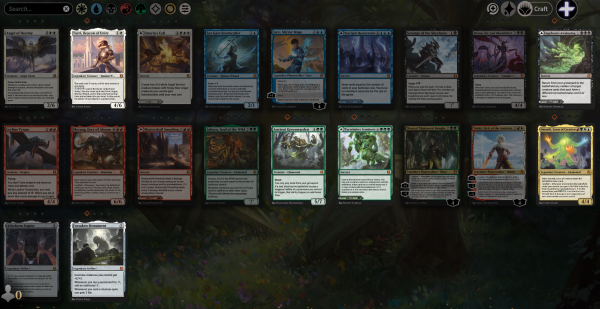 Don't forget, though, there are 10 Mythic ICRs from the Mastery Pass which will help to reduce your grind by 12.5 percent. And for every 30 packs opened, you will be getting a guaranteed mythic wildcard.

I understand that this is a long grind – totally feel you – but as long as you plan nicely through the methods mentioned, you will eventually complete at least 95 percent of Zendikar Rising set, if not 100!

That's all for this week, next week I'll do another article for "Building on Budget" with Zendikar Rising cards. Stay tuned, and if you have any thoughts, let me know in the comment section below.

Thanks for reading, and I’ll see you again next week!