If you haven’t been following along, I’ve been using Magic booster packs as an advent calendar this December and it has been a blast. Now that the first two weeks of December are over, the remaining packs are more exciting, culminating with boosters from Mirage, Alliances, Weatherlight, and Visions. These are some of my favorite sets from when I started playing the game!

On my way there, I have actually learned a few financially relevant tidbits by doing this calendar. In case you haven’t been following the advent calendar, or in case you haven’t particularly cared, I’m going to highlight the top four things I have learned thus far opening all these booster packs and tracking their value.

Without further adieu, here they are in reverse order!

In most sets, a rare or mythic rare is the most valuable non-foil card to be opened in a booster pack. This is especially true with any set printed in the last decade. Therefore, as I’m opening Throne of Eldraine, Theros Beyond Death, or Gatecrash packs, the most interesting card to reveal comes in the last slot of the pack (besides the token or basic land).

As Magic sets age, values are driven less and less by rarity (though it’s almost always still a factor) and more and more by their demand for play in non-rotating formats. This stands out most with two booster packs I opened last week: Scourge and Prophecy, which were released in 2003 and 2000, respectively.

Before opening the Scourge booster pack, I browsed buylists for non-foil cards to see what the most valuable card is in the set to open. The number one card was Sliver Overlord, which buylists to Card Kingdom for $13. No surprise there.

But the number two most valuable card in the set? This uncommon! 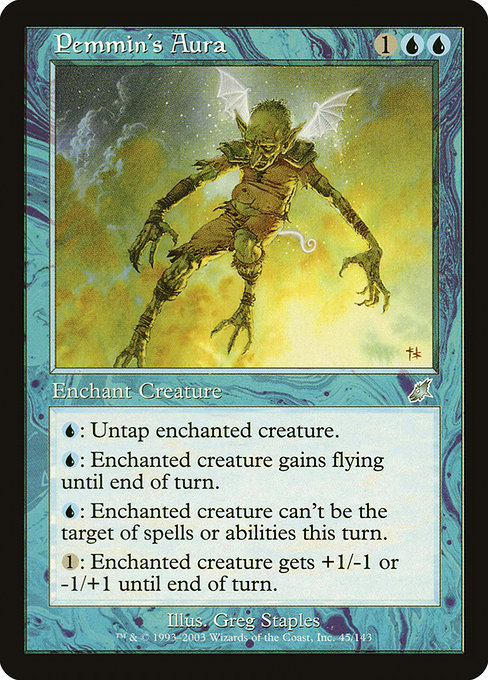 That’s right, an uncommon is the second most valuable non-foil card to open from Scourge. The blue aura is quite popular (presumably amongst casual players…you can’t possibly tell me Arixmethes, Slumbering Isle Commander players are driving the price up). This demand among the casual crowd, lack of reprint, and age of the set has driven this uncommon’s price to be the second-highest of the set!

Although, the real upside-down award goes to Prophecy, one of the most underpowered sets ever printed. There’s one (and only one) card printed in the set that absolutely dominates some games of Commander. The card in question is none other than Rhystic Study. 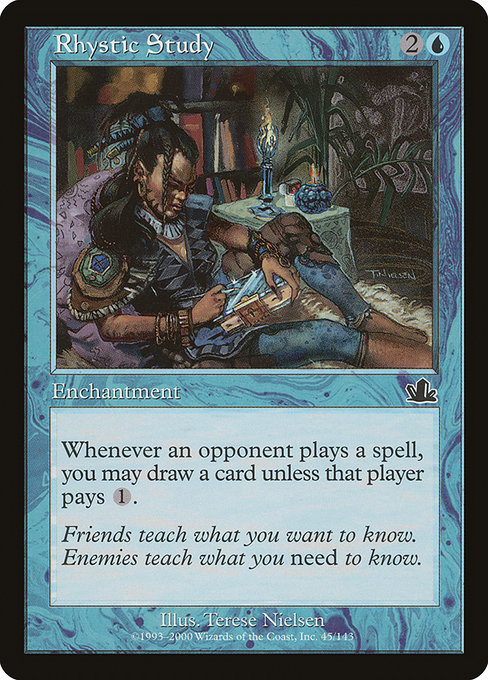 The card has been reprinted in a few supplemental sets, but none with a humungous print run. Because of this, and because Prophecy was printed 20 years ago, this most valuable card from the set goes for $20. And it’s only a common!!

While I was opening my Prophecy booster pack, I wasn’t too interested in the uncommons or the rare. The real suspense came with the commons and whether or not I’d see a Rhystic Study.

One of the boosters I opened was from Battle for Zendikar, released a little over five years ago. Before cracking the pack, I once again browsed through Card Kingdom’s buylist to see what would be worth opening. It turns out that outside of Ulamog, the Ceaseless Hunger and Void Winnower, there’s really very little in the set worth more than the price of the pack.

In fact, the top eight most valuable non-foils from the set are all mythic rare. This means the odds of opening something of value is even lower, considering the most valuable rare is barely worth $2.

Perhaps the set is underpowered like Prophecy was. But I’m not so sure I’m in full agreement here. While some of the rares were truly awful, I believe the Expeditions drove prices of the set’s cards downward. With the chance at opening a $200 card, more BFZ product was opened and that generated more supply on all the rest of the singles.

What’s really interesting is that Kaladesh, another set with Masterpieces, follows a different trend. In that set, the three most valuable non-foil cards are rares. And there’s nearly a dozen rares and mythic rares worth actually opening. While the Masterpieces are likely having an impact, the set seems to be good enough to overcome this and still maintain some value outside the chase foils.

Nowadays foils are a dime a dozen. Some premium sets, such as the Masters sets, contain a guaranteed foil in every booster. Throne of Eldraine booster packs advertise odds of opening a foil card at 1:3. 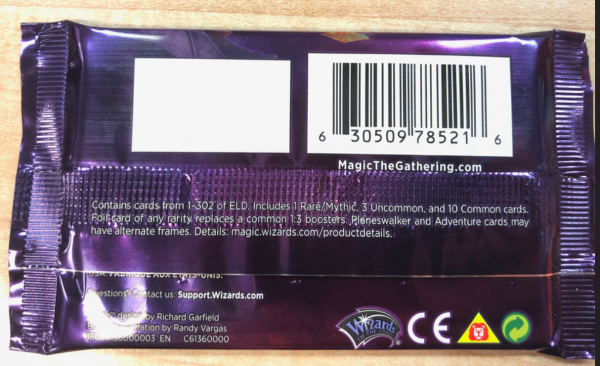 The back of a Core Set 2020 pack boasts odds at opening a foil at 1:45 cards—with 15 cards per booster, that’s the same odds as Throne of Eldraine.

This wasn’t always the case. You don’t have to go too far back to see worse odds. The back of a Gatecrash booster advertises odds of a foil at 1:67 cards, or roughly every four or five booster packs. These odds were fairly common a few years ago, and I see the same numbers on the back of my Shadows Over Innistrad and Battle for Zendikar as well.

Going back further, the back of the Scourge booster I opened advertises foil odds at 1:70 cards. These 1:70 odds date all the way back to Judgement and Torment. But older sets, starting with Odyssey and going backwards, have advertised odds at 1:100 cards, or roughly every six or seven booster packs.

It’s no wonder foils from roughly 2001 and before are so rare and valuable! They occurred much less frequently (less than half as often) as foils nowadays. This also partly explains why foils carry such little premium in modern-day sets (though their frequency in set boosters and showcase boosters multiply their print run dramatically).

Number 1: Why Is Decree of Silence Worth Money?

When I opened my booster pack of Scourge, I was focused solely on two cards I knew had value: Pemmin's Aura and Sliver Overlord. As I leafed through each card one by one, I made it through the uncommons with a bout of disappointment as I saw no Pemmin's Aura. Then I arrived at the rare and saw it wasn’t Sliver Overlord. Bummer.

The rare was in fact Decree of Silence, and while I was recording my pack opening video I commented how it wasn’t the most exciting but still a cool card. It wasn’t until after the fact, when I looked up the card on Trader Tools and realized the card was worth about $10! Immediately I asked, “Since when?” 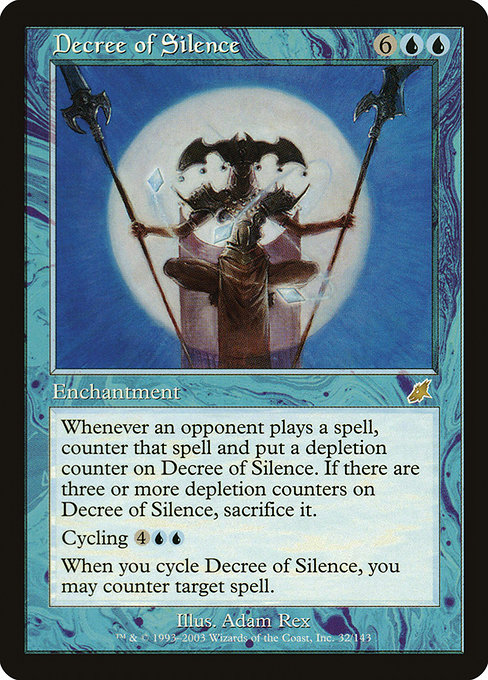 Apparently, the answer to that question is, “Since April this year.” That’s about when the card spiked. When I asked Twitter why the card had jumped, my attention was directed to the printing of a new Commander card, Gavi, Nest Warden. Now it makes sense! Thanks to Gavi, you can pay zero mana to have an uncounterable counterspell that also draws you a card! That’s a potent combination.

I had thought maybe the card had spiked thanks to Solemnity—this combination of cards essentially locks all your opponents out of casting spells for the rest of the game. Apparently, there was a small jump back when Solemnity was printed, but Gavi was the real driving force.

This just goes to show you, any card from an older set that does something unique has the chance to one day become expensive. It just needs the right Commander card to be printed. As Wizards continues to innovate in the Commander space, and cards become more and more complex in their abilities, you just never know what card will spike next. I’m excited that I opened one of them!

While my Magic advent calendar started as a fun activity to get me excited about this year’s holiday season (despite the pandemic), I am learning a great deal of relevant MTG finance information as well. This calendar has already taught me a few valuable tidbits, and I was excited to share them all here so others could also benefit from my education.

Please stay tuned as we look ahead to the last two weeks of this advent calendar. Whether or not you celebrate any particular holiday, you may be interested in watching me open some exciting packs from Magic’s history. I saved the best packs for last, and I can’t wait to see if my luck continues as we head towards the New Year!