Warning: this article features spoilers for the upcoming Kaldheim set. 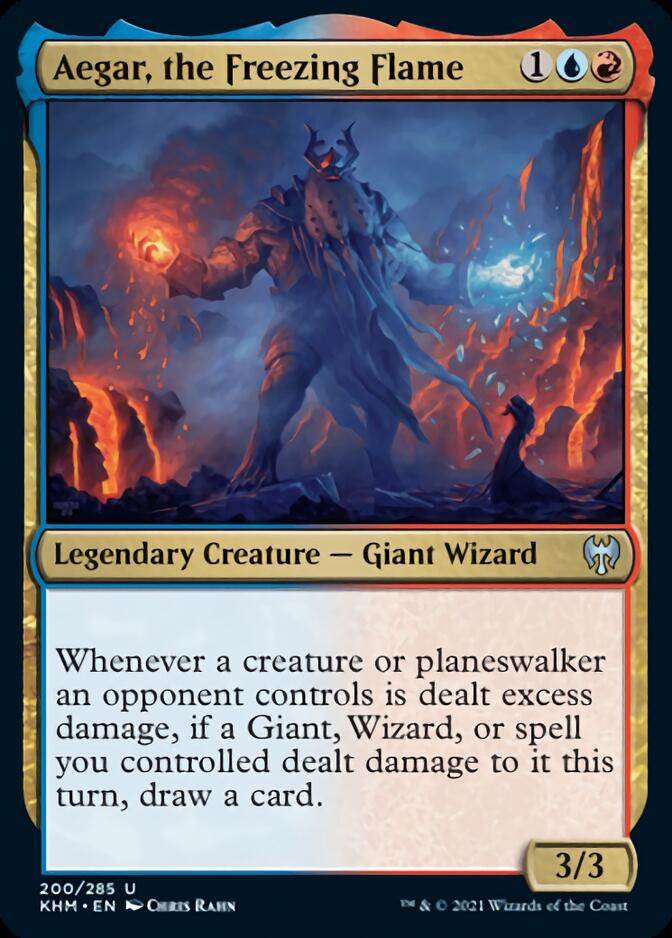 Kaldheim shifts away from previous iterations of Giants by shifting them from a Boros creature type to an Izzet creature type. There are both good sides and bad sides to this shift. Blue is a significantly stronger color in Commander than white so this change allows players to include stronger overall cards. The downside is that if you want to use Aegar, the Freezing Flame as your commander, you lose out on all the white or Boros giants from Magic's past. That being said, there is still a lot of room to build around this commander and I'm excited to dig into it.

There are a few key requirements for a good Aegar, the Freezing Flame deck.

We will work backward on our list and start with point 3 as it's the one with the most options. There are a lot of red mass damage spells in Magic's history, though few typically find a home in Commander decks. The reason is that most aren't really mana efficient with regards to how much damage they do and often in order to kill large creatures you have to pump a lot of damage into them to do so. However, there are two that are strong enough that they do find a home in many commander decks and would be auto includes in any Aegar deck. 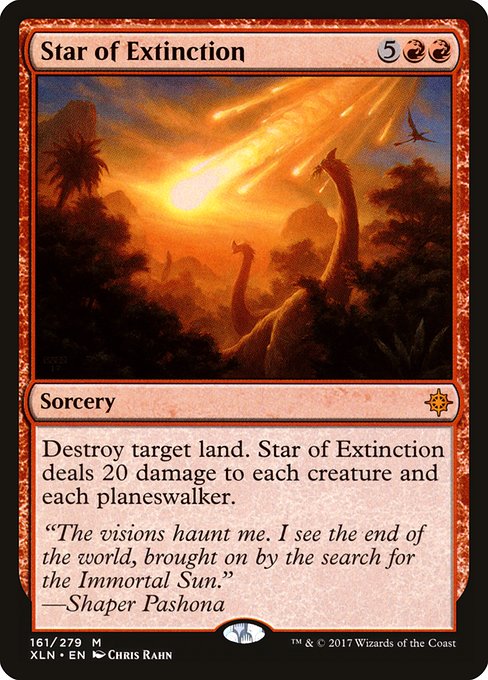 Star of Extinction was a bulk mythic when it originally came out. It had a lot of flavor behind it, but seemed like overkill. This coincidentally is a term one of our QS Insiders used to describe Aegar, the Freezing Flame and Flame Spill's "excess damage" statement, and I hope that this term sticks.

Looking at the price graph, we can see there was a slight uptick in price after Aegar, the Freezing Flame was spoiled, as 20 damage will almost always be "excess" and tacking on a draw 6+ to Star of Extinction makes it extremely good in Commander. This card has only 2 printings, Ixalan and in the Mystery Boosters. I wouldn't consider the Mystery Boosters a truly mass reprint though given just how large the set was as a whole, so there is a lot of upside potential for this card. 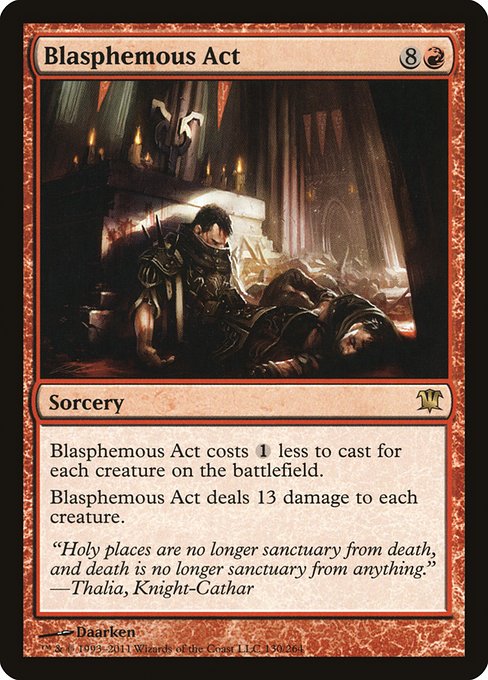 Another card that started out its life as basically a bulk rare, Blasphemous Act is the number 2 most played red card on EDHRec. It's a mass board wipe that often costs 1 red mana. In a similar vein to the previously mentioned Star of Extinction, it's 13 damage is typically enough to kill everything and more often kill it by a lot. This was a $5+ card up until it was spoiled in Commander Legends and it has since dropped considerably.

Blasphemous Act has been reprinted repeatedly, in fact, two of its reprints occurred in 2020 as it is in Double Masters and Commander Legends. Unfortunately, I don't see a lot of potential for any of the regular printings as both those sets are expected to have additional print runs. However, the extended art option from Commander Legends is around $3 as of me writing this and there aren't likely to be more of those being printed anytime soon. 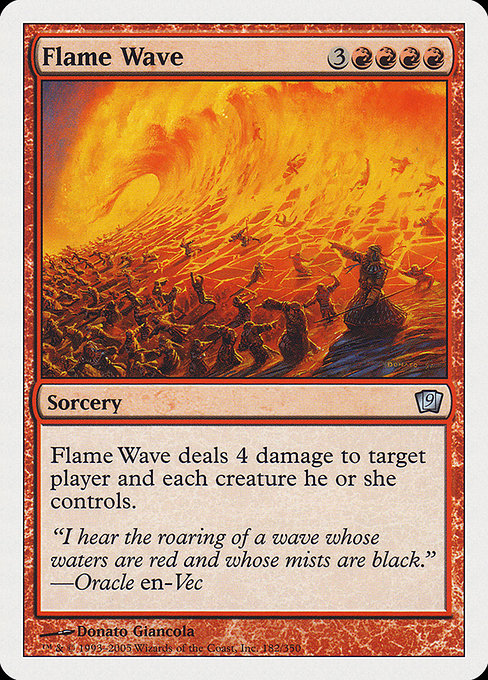 Finally, we have a potential speculation target that hasn't been printed in the past 15 years. There are currently two printings of this card, Stronghold and 9th Edition both at uncommon. While there is some upside potential for older uncommons, the price ceiling is likely somewhat limited on this one as it only does 4 damage, so it's really only a mass removal spell against a board of small creatures controlled by one player. The benefits are that it doesn't hit your creatures so it won't kill Aegar, the Freezing Flame like the other two spells mentioned already. For this as a spec, I like the foil 9th Edition versions which I'm seeing in the sub $2 range, with very little supply. 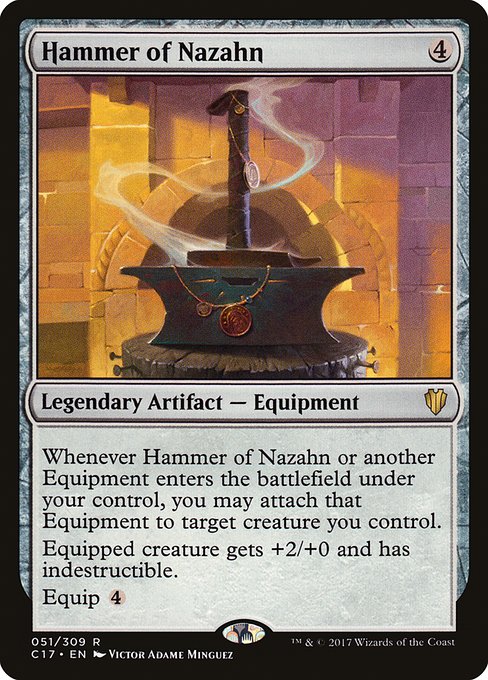 Unfortunately, the buy-in on most of our options for point #2 is high as there aren't a lot of ways to give your creature indestructibility or protection from red in the Izzet color pie, so we typically have to rely on artifacts. The good news is that this card is good with a lot of commanders so that universality means that its value will likely remain. It is important to remember that we are expecting more Double Masters boxes to enter the supply once WotC's printers get caught up, so the price may drop a bit once that happens.

Sword of War and Peace 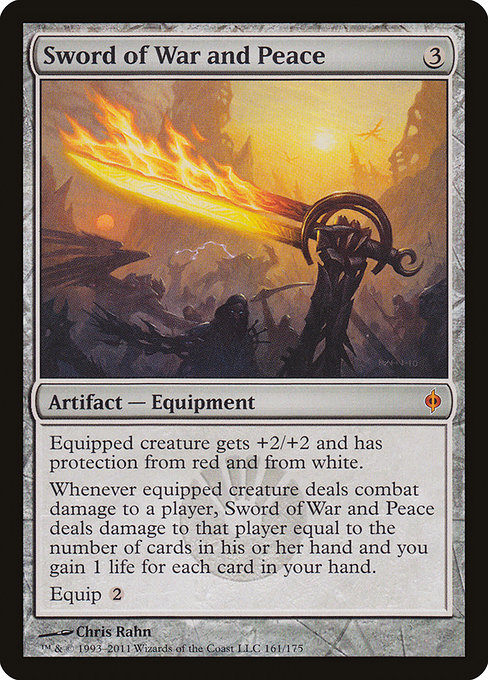 Arguably one of the weakest of the Sword cycle, this once standard all-star has simply not proven itself as a staple in the Commander format. That being said, it's life gain ability plays very well with Aegar, the Freezing Flame's draw ability and protection from white helps with a lot of targeted removal. 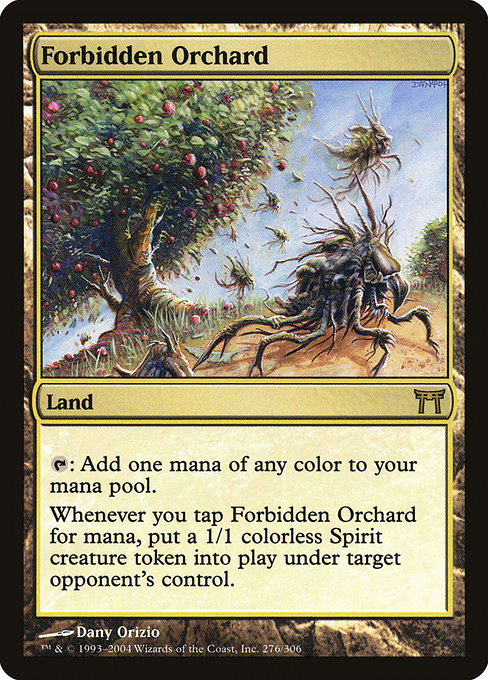 I'll be honest I was blown away at this card's current price. Admittedly, it hasn't really had a mass reprint and it seems to find a home in a fair number of Commander decks. The buy-in here is pretty high and the risk of a reprint seems relatively high as well, however, it's unlikely to be reprinted in Standard as most spirit tokens are now white, so it would seem out of place. I do think there is some potential upside as a spec for Aegar, the Freezing Flame, but this isn't one I'd go deep in. 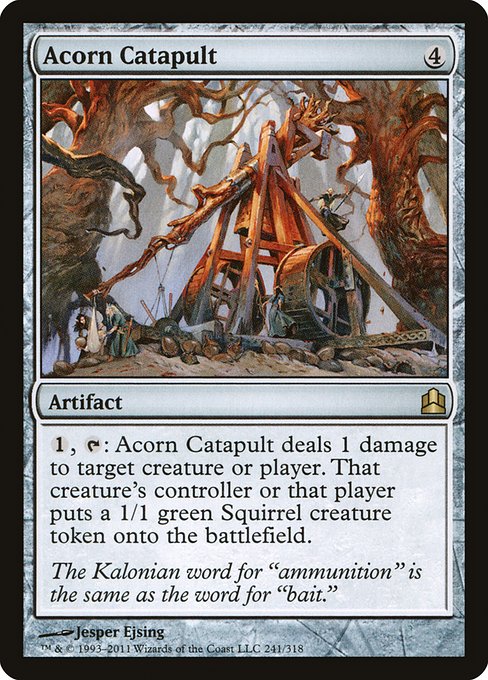 Acorn Catapult is another one whose price really surprised me. The ability is relatively weak to give your opponent a creature; however, the squirrel creature type is one with a devout following and its printings are limited to the original Commander product and The List. This is also one of those cards that can be used politically to gain favor at the table against specific players.

I hope everyone is excited about Kaldheim as I am. I really like the flavor of this set and there are a lot of new cards I can't wait to add to my Commander decks. I am also very excited to build my own Aegar, the Freezing Flame deck, using the cards I mentioned in this article as well as plenty of other mass damage spells like my beloved Inferno, which is the very first rare I ever opened way back in 1997.