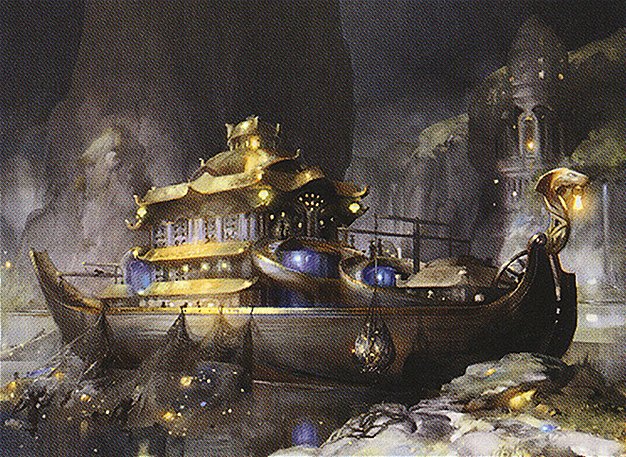 This month's ManaTraders event is Pioneer, so it is a good time for us to explore the format. For those who are not familiar, Pioneer is a nonrotating format introduced in October 2019 using sets from Return to Ravnica onward. It features an extensive ban list including all the Khans of Tarkir fetch lands. A metagame breakdown of the format from MTGGoldfish looks like this:

Quick Takes on The Pioneer Metagame

I’ve played a bit of the format recently and here are my quick thoughts on some of the most played decks.

I was never really allured by this deck so I haven’t played it much. It's a reasonable choice if it speaks to you.

Pros: Gets to play Treasure Cruise / Expressive Iteration. The Combo-control archetype is generally a nice spot to be in. Consider + Cruise seems potent.

Cons: Can have issues vs both slower and faster decks. It doesn't goldfish for a win that fast. Whenever I try and play the deck I feel I just die when I go to cast Ascendancy. There is also potential difficulty beating other control decks due to Slaughter Games + Narset, Parter of Veils + Dovin's Veto type of cards.

I am lower on this deck than most people. I’ve heard many say this deck is the best in the format and they don’t think it is close. I think this deck is a good metric for what your Pioneer deck's power level should look like. The deck is playing most of the “good” cards in the format, so if you have trouble keeping up with this deck it might mean your strategy is underpowered. (though there’s also cases where your primary gameplan might just line up poorly, such as Jund Food)

Pros: Proactive gameplan while maintaining a very defensive posture vs creature decks. In other words, the deck is good at winning the game by casting/finding Boals' Citadel but also good at making it hard for the opponent to kill you because Woe Strider /Mayhem Devil / Catacomb Sifter are somewhat defensive.

Cons: When I play this deck I feel it’s hard to win the game without casting Bolas's Citadel. Most of the creatures feel so mopey, as is probably usual for sacrifice-type decks. I felt a bit all-in on the Citadel, and vulnerable to my opponent having a plan for that, but I'm not super sure. I also felt Mayhem Devil was pretty weak in this deck, Korvold, Fae-Cursed King to a degree too. Without Witch's Oven and Cauldron Familiar you don’t get many free sac triggers. I might be underrating it just because it wasn’t as good as when I played them in Cat Oven decks. The deck can feel weak to hate cards like Grafdigger's Cage and Yasharn, Implacable Earth. Needing a constantly high creature count for Collected Company can make the deck feel inflexible.

If you are interested in trying this deck I would look at Courser of Kruphix. I think the synergy with the scry cards is pretty strong, but not sure if it’s good enough.

There are also Cat Oven sac variants utilizing Cauldron Familiar and Witch's Oven you can explore as well.

Pros: Hard for people to interact with Treasure Cruise. Kind of easy to cast Cruise, and you are usually in a good spot after casting it.

Cons: Potentially awful vs Burn (which is usually quite popular). Not sure exactly what distinct weakness I would give to the deck. It plays many cantrips so it can have “airy” draws, but those cantrips are also the deck's strengths, allowing it to play Cruise.

I can’t speak much on this deck, but it feels like a solid tier one or two deck, similar to Jeskai Ascendancy. It plays most of the good interaction and the good card advantage. Seems a bit inelegant, but I'm not sure how much that inelegance will translate into win rate.

Pros: Thoughtseize into Sorin, Imperious Bloodlord is powerful. The deck has a decent game plan whatever matchup is thrown at it.

This is your typical control deck. If you like control try the flavor that suits you. I haven’t really touched these decks so I can’t speak too much on them. If you are looking for the best chance to win, you are likely well served to try them at some point to see what all the fuss is about. Consider seems like quite an upgrade to me with the Delve spells.

Pros: Access to explosive draws with Springleaf Drum plus Ornithopter. A low aggressive curve with staying power from cards like Ingenious Smith and Ghostfire Blade .

I’ve played this deck quite a bit over the past few weeks and have been enjoying it. Here's my list:

I'm not exactly sure about the sideboard cards. You want a couple of answers to Omnath/Kalitas so I think Devout Decree or Valorous Stance is likely your best bet. There is the new card Fateful Absence which seems like it should be a way better card than either of them but hasn’t felt great for me so far. Whenever I draw it, it feels bad to cast. Only time will tell I suppose.

The Glass Caskets in the list could also be replaced with something else. I put them in there because I wasn’t sure what else I wanted and they seem reasonable. I have Stubborn Denial over Mystical Dispute because I thought the ability to counter spot removal and board wipes would be bigger than countering creatures. The cost of holding up mana for a counter is pretty big, and it felt like I was falling behind if I held up mana for Dispute and the opponent had a removal spell or a board wipe.

I’ve recently been messing around with an Ensoul list using Expressive Iteration. I noticed that I tended to win the games where I cast Ingenious Smith, and had a more difficult time when I didn’t draw the Smiths. I wanted access to more copies of the card somehow, and Iteration seemed like the most similar effect. Luminarch Aspirant has been decent for me so far. It sometimes feels low impact when I cast it, and sometimes feels excellent like the card is a white Bitterblossom. Most of the time though it just feels like a bad Ingenious Smith. The Shrapnel Blasts in the sideboard here might be better off as typical white removal, and you might even want them main. I'm still not sure, but this was the latest version of the list.

Keep an eye on the synergy between Consider and Treasure Cruise. I don't imagine the Delve spells will stay around in the format forever. Along with Lurrus, of the Dream-Den, they are the best cards in the format in my opinion. As each new set comes out, Cruise decks are likely to get more and more streamlined, pushing everything else out of the metagame.

I will likely play Phoenix or Ensoul this weekend personally. Best of luck to all playing!