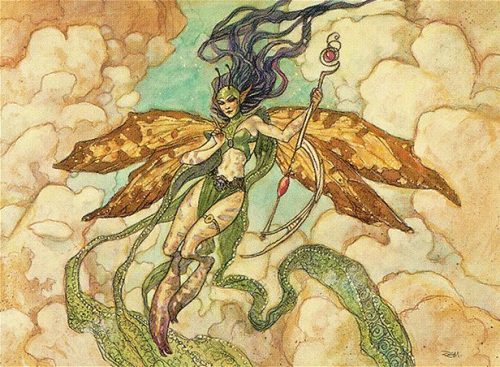 Interest in Pauper, the 60-card constructed format you play with only commons, has taken off on Magic Online since the banning of Chatterstorm and Sojourner's Companion in September. The inclusion of Pauper as one of the Magic Online Championship qualifier formats, with multiple PTQs taking place, piqued my interest and I've started playing. Here's a quick look at the format, and my Faeries deck after a couple of weeks of testing and playing.

A snapshot of the Pauper metagame from MTGGoldfish looks like this:

Why I Chose Faeries?

There are theoretical reasons why Faeries is nice. The first that comes to mind is that it’s pretty good at doing powerful things while avoiding hate cards. Generally when your deck is able to do busted stuff, your opponent has the opportunity to side in cards like Rest in Peace or Stony Silence to answer it. Faeries, like many top tier “fair” decks, is not particularly weak to any matchup or sideboard plan while simultaneously leveraging high power level cards.

Here are some of the powerful things Faeries has access to:

The main reason I like Faeries isn’t too convoluted. I started playing the deck and didn’t see any reason to put it down. It performed pretty well for me and I just kept playing it.

Why Black Over Red?

Red certainly intrigues me, Pyroblast seems great in the mirror, being able to resolve more Augur of Bolases than the opponent seems like a good plan. Pyroblast also avoids the awkwardness Counterspell has of leaving it up and getting rekt by a flash faerie into a ninja.

You play Skred and Lightning Bolt over Snuff Out and Cast Down. I am not exactly sure I can call this a downside though. The prevailing concensus is that the black removal is better, and they are certainly better at killing threats from Affinity like Atog and Myr Enforcer. But I can also see spots the Burn spells can overperform. Being one mana instead of two, the ability to go to the face and so on.

The ability to play Fiery Cannonade also seems like an upgrade to the black sweepers to me. Many decks side in cards that grant an additional toughness, so I am not sure on this. It's also a delicate balance as the Pirateclasm can blow up your own faeries.

The biggest difference in my eyes is black seems a bit more versatile. It has access to edicts like Devour Flesh, giving you options versus tricky threats like Slippery Bogle and Guardian of the Guildpact. Gurmag Angler also adds some raw power you miss out on in red.

I went 6-2 in the pauper PTQ last week with this list, losing aginst Affinity in the first round, and sadly playing poorly against it the last round.

Going Deeper Down the Rabbit Hole

After thinking a bit more, I put together an updated version of the list:

Spellstutter Sprite hasn't impressed me. It wasn't as proactive as the other creatures, and wasn't a reliable interactive spell. I think you need it because it gives you an "engine" and you want access to it sometimes. I cut down on one for the time being.

I added in extra cantrips. In my small sample so far I have always been happy to draw the cantrips. I felt they made the deck operate more smoothly. I might be taking the durdling too far, but I feel comfortable following my gut and seeing where it takes me. To make room for all these extra cantrips I cut a couple lands. The extra ponders do some things that might not be obvious at first glance. This includes facilitating the siding out of blue creatures gameplan, which I will get to.

I'm not sure what the maindeck removal spells package should look like. I landed here for now and plan to keep an open mind as I keep playing to update as necessary.

I added black creatures to the sideboard with a plan to cut all my faeries/ninjas in some matchups. I theorized that in some matchups, interaction into black creatures was a better plan. The blue creatures were mostly getting in the way of executing that plan. I did this with matchups like Mono Green Stompy, and potentially even Elves and Affinity in mind. I am not 100% sure this plan makes the most sense, but it has felt good so far. Another card to consider in a similar vein is Spire Golem. This is another creature out of the sideboard to juke people. This one should perform well vs a deck like Boros Monarch, being able to block their 1/1 fliers and enable your ninja when the faeries don’t look too hot. Again, this is pure theory at this point. In practice I may be siding out the faeries too much.

I thought of Ob Nixilis's Cruelty as an answer to Stormbound Geist. Having more removal meant I could sideboard out all the blue creatures for black spells more easily versus random creature decks. It also improved my Augur of Bolas hit count which is nice. You also get random bonus utility like being able to answer a Young Wolf.

Gut Shot was an idea for the mirror mostly. Of course it has other applications too, but those aren’t the reasons I put it in the deck. I don’t see too many people playing them so I can’t say for certain they're good, but I have been liking them so far. I felt a bit scared of falling behind on board quickly and thought this should help me keep my head above water.

Other people play Stormbound Geist, partly for the mirror, and partly for generally grindy matchups. It didn't seem particularly appealing to me though. It seemed too easy to fall behind to a Ninja or Angler with it, while also getting punished by a counterspell in other situations. Not that I think the card is bad, and I might be underrating it, I just found other options more appealing.

I have enjoyed exploring Pauper so far. As I mentioned earlier, I only started playing a couple weeks ago so my ideas are pretty nascent. I imagine they will evolve the more I play the format and form stronger ideas. Good luck in the Pauper PTQ this weekend if you play!