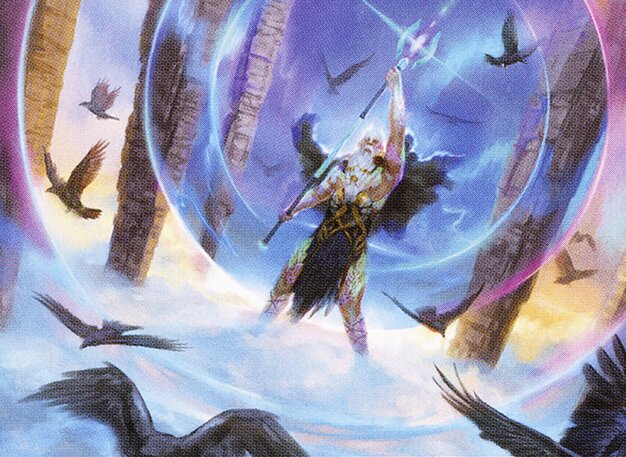 Lately, I've been enjoying the new Standard format, playing the popular deck built around forking Alrund's Epiphany with Galvanic Iteration. Currently, the lists are all over the place — I tried many, however, the following list was the first one that really started to hum for me.

This list is in essence what Seth Manfield tweeted during the arena open.

The archetype is still in its nascent stages, leading some to ask the following questions:

When I say this list was humming, I don’t mean it's perfect, but all the previous lists felt rough around the edges by comparison. With this deck, I was finally starting to get good turns consistently, as the ratios are pretty well balanced.

So, let's discuss some of the cards in this list, and how it might evolve in the future.

Memory Deluge was consistently underperforming for me. Even in the mirror where it should theoretically shine, it still felt like too much mana for too little.

The foretell ability on Behold the Multiverse lets you split up your mana, helping smooth out your draws, especially when your deck has four Unexpected Windfall in it. The ability to fork it with Galvanic Iteration is huge.

Many times you cast Deluge your opponent either has a Malevolent Hermit // Benevolent Geist up or Test of Talents / Divide by Zero leaving you behind on mana technically.

Being two mana means you can fight over Behold on your opponent's end step. These small things add up a ton, so I am pretty happy with it now. I plan to explore lists running even higher numbers, potentially by trimming down on Expressive Iteration.

Cftsoc3 came second in the Standard Challenge with an interesting list running four Behold and zero Iteration, and I like the idea somewhat. So, let's compare Iteration to Behold.

On the one hand, Iteration costs half as much mana. On the other hand, Behold is an instant (and therefore better to fork) and it's better for finding spells early game if your hand happens to be land heavy.

If you are purely drawing two, it’s a better deal to get it for two mana. Iteration is such a strong card it’s hard to shave any. However, by trimming some from the list, you may be able to spend your mana more smoothly each turn.

Also, it can feel kind of awkward to cast Iteration in the early game, as the deck also has plenty of instants. Therefore, you may find yourself in an awkward situation with Iteration: when you don’t want to tap out, but you also might fall behind if your opponent doesn’t play into your Instant.

Alternatively, you may end up with a land-heavy hand, where you can only pick one spell off of it. For now, the jury is out on the ideal Iteration/Behold split. Personally, I'm going to try two Iteration four Behold next, and time will tell what is best.

Thundering Rebuke is a sorcery, which is awful, but it's only two mana. This might make it useful in lists that lack things to do on the second turn.

In a heavier Behold list, I will try going up to four as Ctfsoc3 did.

I’ve been playing more Battle of Frost and Fire in my lists, though I still haven't determined which one is better. It will depend on how relevant the scry is of course — and in a four Behold list, having spells that are better at stabilizing might end up being the better play.

I like this in lists like Seth’s, as it's a good card for buying time against aggressive decks. Also, it lets you sculpt your plan in the mirror, which is appealing.

Divde by Zero has felt great for me and I wouldn’t go below 4 yet without good reason, due to the Remand / Cryptic Command vibes.

Between these three options, just play Disdainful Stroke or Negate, as hitting Esika's Chariot is huge. Many are still fans of Goldspan Dragon as well.

I play four Spikefield Hazard and four Jwari Disruption because I feel like I always want to draw them. Spikefield is a bit more volatile, but I would really love to have it, as it's brilliant against mono-white — and I like killing Malevolent Hermits, too.

While I don’t have Field of Ruin in the lists I’ve been playing, most people do. I might be off base here, but I didn’t feel like I would activate it enough to make it worthwhile.

Iymrith, Desert Doom seemed like a fun card to try. Compared to the red dragons, it protects itself from removal quite nicely.

Working that in, here's what I'll be trying next:

Something like this should be nicely balanced. However, the fatal flaw might be the lack of any creature plan sideboard, as this list won’t be able to punish opponents for tapping out as much or fight through Test of Talents. I mostly wanted to fit in a couple Demon Bolt so I had more answers to Smoldering Egg in the 75. With all this in mind, I will try to fit in some creature plan soon!

One card I have not mentioned yet, which is worth being aware of Lier, Disciple of the Drowned

Shota Yasooka posted this list last week, the black spells in the sideboard are Go Blank and Duress.

I don't find it instinctually appealing, but I do think Lier is a very strong card that is worth considering.