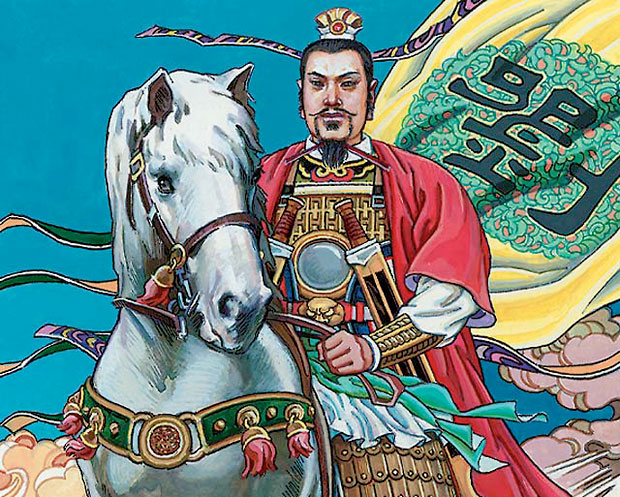 Did you really think we were done dealing with short didactic sentences? The last one we saw was an excerpt from Seneca, at the end of the article on Latin quotations. Analyzing a collection of Middle-Eastern folk tales last week temporarily relieved us of that kind of witty sentence. One Thousand and One Nights has no room for hasty generalizations. As you can see, however, we're back to dealing with phrases that sound like proverbs.

What I like about this quotation from Lao Tzu is the fact that it's built as a climax. It's not necessarily what the author intended when he wrote it down, but it's for sure what happens when we read it on a Magic card. The card in question is called Greed, a black enchantment from Legends. It is one of only two cases of Magic cards with Chinese flavor text outside of Portal Three Kingdoms.

The text itself is a very typical case of tricolons, where three sentences with increasing relevance follow each other. We start with the greatest calamity, then pass to the greatest guilt, and finally arrive at the greatest disaster, which is exactly what gives name to the card: greed.

So, Greed is the first card in Magic to receive flavor text consisting of a quotation from a Chinese author. It was printed in Legends, and it surely must have been quite a novelty at that time. No other cards with this kind of reference were printed for five years. Then, in 1999 came the third starter-level set, Portal Three Kingdoms.

We mostly know Portal Three Kingdoms because it contains precious cards such as Imperial Seal and Ravages of War, but it was also a big thing if you consider flavor. In fact, it was the first set since Legends to reference specific people, places, and events from the real world. So, what about the other cards? 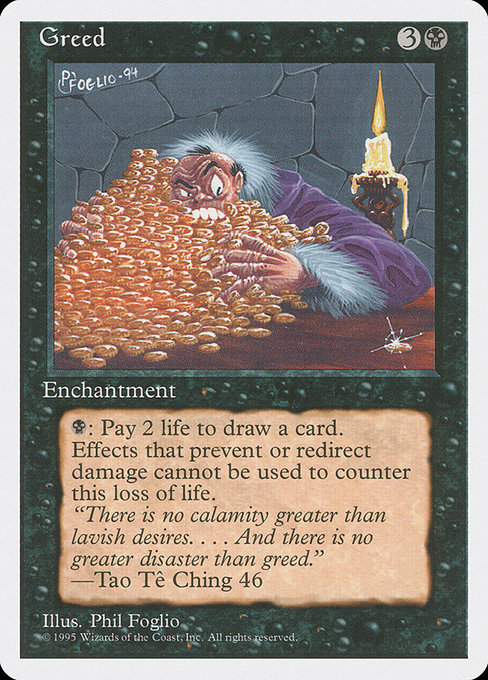 An Overview on Authors and Genres

There are five Chinese authors quoted in Magic: The Gathering. Let's take a look, in order of importance:

When it comes to literary genres, the variety is not the same as we saw with classical authors. Neither is it as low as the one from Arabian Nights. It's somewhere in the middle. Luo Guanzhong’s quotes all come from his prose historical ﬁction, Romance of the Three Kingdoms, and thus mostly deal with warfare. Sun Tzu wrote a famous military treatise called The Art of War. The other three are closer to philosophical texts. Lao Tzu wrote a text called Tao Te Ching, and Confucius wrote the Analects. We also have a lone card referencing Mencius, from his homonymous work Mencius, another philosophical text.

Portal Three Kingdoms alone has 50 different cards with a real-world quotation, which is a record. And it gets even more impressive when you consider the fact that it’s quite a small set, with only 180 total cards. More than one in four cards contains a real-world quotation from an ancient Chinese author, either dealing with war or with philosophy. Now, let’s try and go into more detail, as far as the vastness of the corpus allows us. 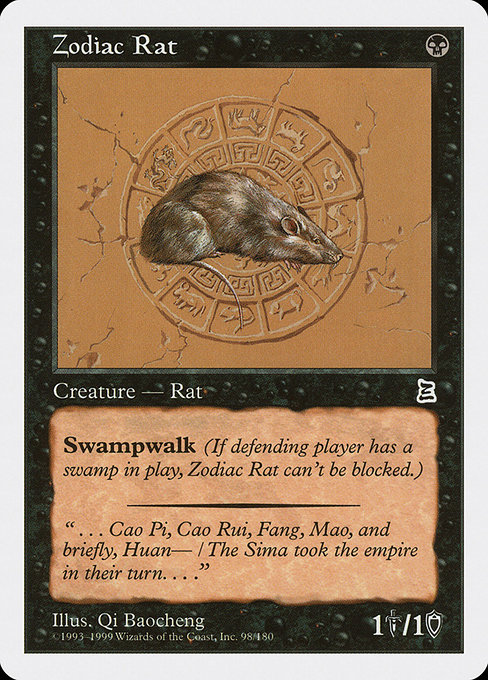 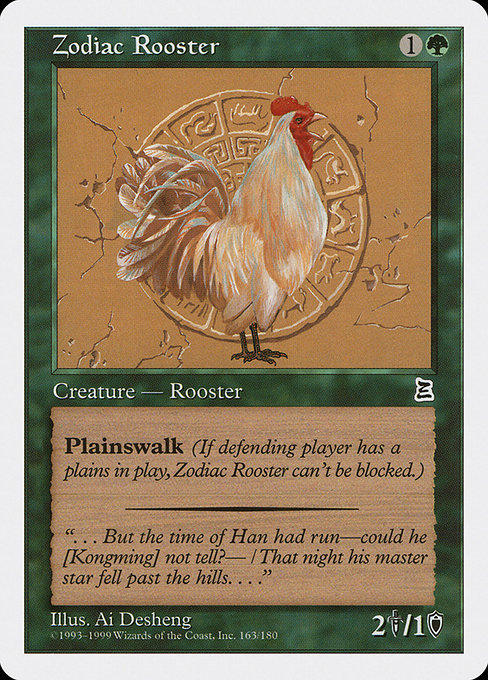 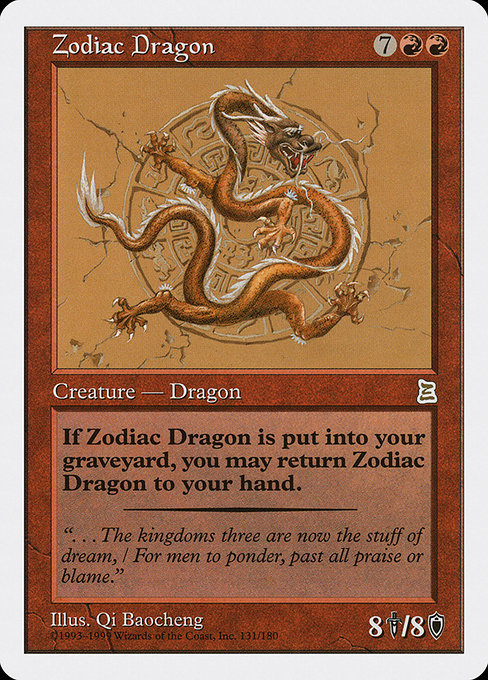 Let’s start with the most famous cycle, the one known as the “Chinese Zodiac”. There are twelve creatures, each representing one of the twelve animals from the Chinese Zodiac: Rat, Ox, Tiger, Rabbit, Dragon, Snake, Horse, Goat, Monkey, Rooster, Dog, and Pig. They are all infamously mediocre creatures, typically with a land walk ability but unimpressive stats.

The most famous and expensive is Zodiac Dragon. It's also the only one without landwalk, and probably the most unplayable nowadays. It costs nine mana and is a quasi-vanilla 8/8. Its only ability is its chance to come back to your hand every time it dies.

What I find truly spot-on about this non-flying dragon, though, is the flavor text. "The kingdoms three are now the stuff of dream, / for men to ponder past all praise or blame". It's a couple of hendecasyllabic verses, a line of 11 syllables. It's also the ending of the whole poem. Endings are always meaningful, and coupling this creature with this quotation is a strong move.

I know this dragon is actually a bad card when it comes to its power level. However, Dragons are a huge thing in Magic (and fantasy in general), which is why I consider this choice favorably. Again, it's not about power level, but rather about lore and feeling.

Breaking Down the Corpus

Back to the full corpus, the first distinction I’d like to make is between quotations from a military context and those from a philosophical context. Romance of the Three Kingdoms is culturally significant the same way the Homeric poems are for western culture. As for the philosophical treatises, they are similar to western authors such as Plato or Seneca.

The Art of War by Sun Tzu is somewhere between a military book and a philosophical treatise. It certainly deals with matters of war, but at the same time, often sounds like a didactic book, a work of philosophy again. I consider it similar to The Prince by Machiavelli. Now, let's examine a triplet from Confucius’ Analects. 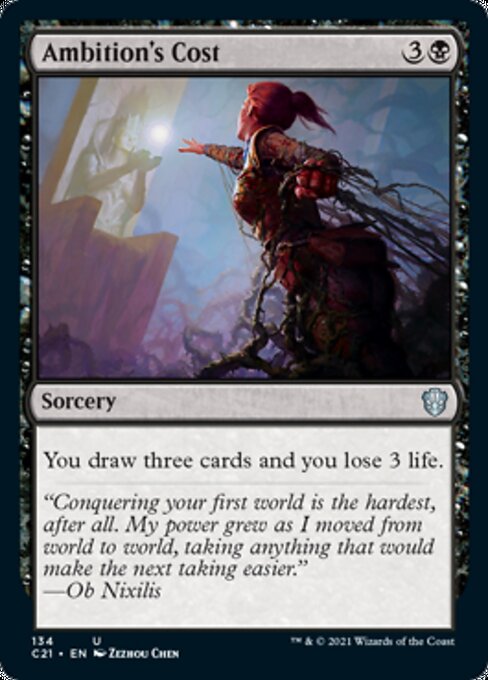 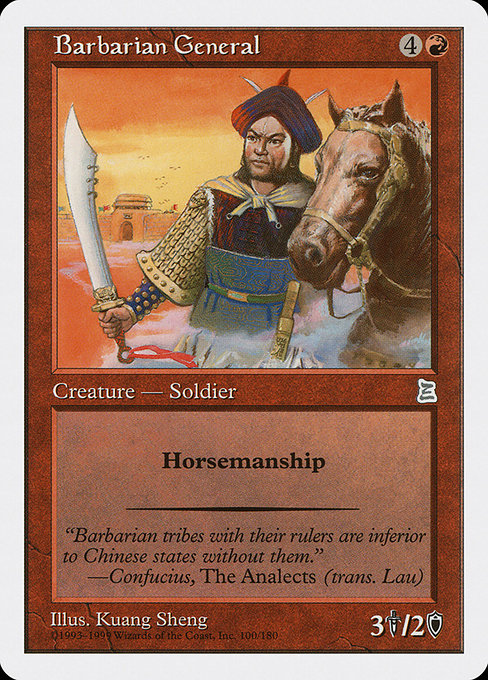 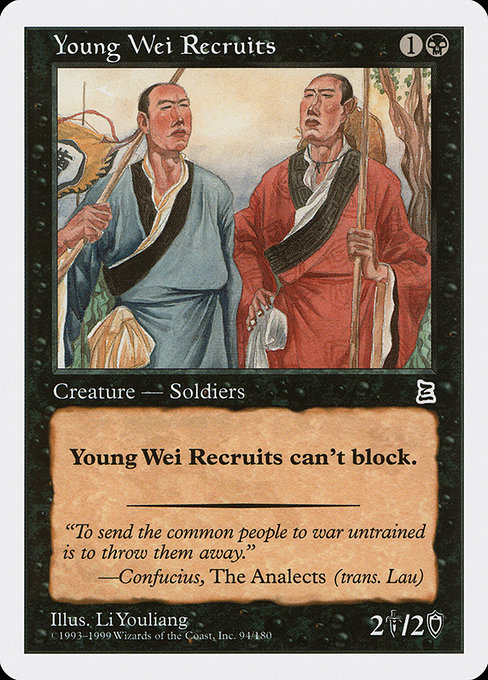 The first card is Ambition's Cost, a black sorcery that makes you draw cards in exchange for life. The text goes: “When you give offense to heaven, to whom can you pray?” Not that impressive. It’s just the usual stuff about black being the color of ambition (remember: “Greatness at any cost”), willing to pay anything for more knowledge and power. As for the quotation, it’s a plain rhetorical question, but still not bad in my opinion.

The second is Barbarian General, a red creature whose text says: “Barbarian tribes with their rulers are inferior to Chinese states without them”. A 3/2 warrior for five mana, with the only plus being the ability Horsemanship. Not exactly a bargain, but still coherent with the average power level of this set, which was designed specifically for new players.

In this case, however, the card being so weak is actually a plus, since it's exactly what the text is saying. The card depicts a barbarian general, and the flavor text says he’s not impressive, which is true when you look at its stats and abilities. Good design.

The last one is Young Wei Recruits, a 2/2 black Soldier for two mana which is unable to block. The text explains how throwing young people into war without training is no different than sending them to slaughter: “To send the common people to war untrained is to throw them away”. A message that is quite easy to agree with, and it also goes well with a clearly untrained young soldier. He is unable to block and thus is probably going to die soon. Sad, but again a nice choice.

There are 52 cards with Chinese quotations as the flavor text. This article was mostly an overview of them. It might be too early to draw conclusions, but based on our overview of the cards, and the specific ones we analyzed in this installment, I'd say that most of the flavor quotes are close to the genre of maxim and proverb. The only exception we've looked at so far was the flavor text from Zodiac Dragon. We'll see in the course of the next installments whether this is because of its origin (a historical novel) or for other reasons.

In my opinion, this shows how the division of genres in any culture is largely geographical. There might be differences from one to the other, and there might be a particular tendency towards a genre or another. Nevertheless, in the end, we can expect to find pretty much the same stuff, no matter the culture we are looking at. We'll see in the next articles if this holds true.

One thought on “Real-world Flavor. Confucius and the Romance of the Three Kingdoms”