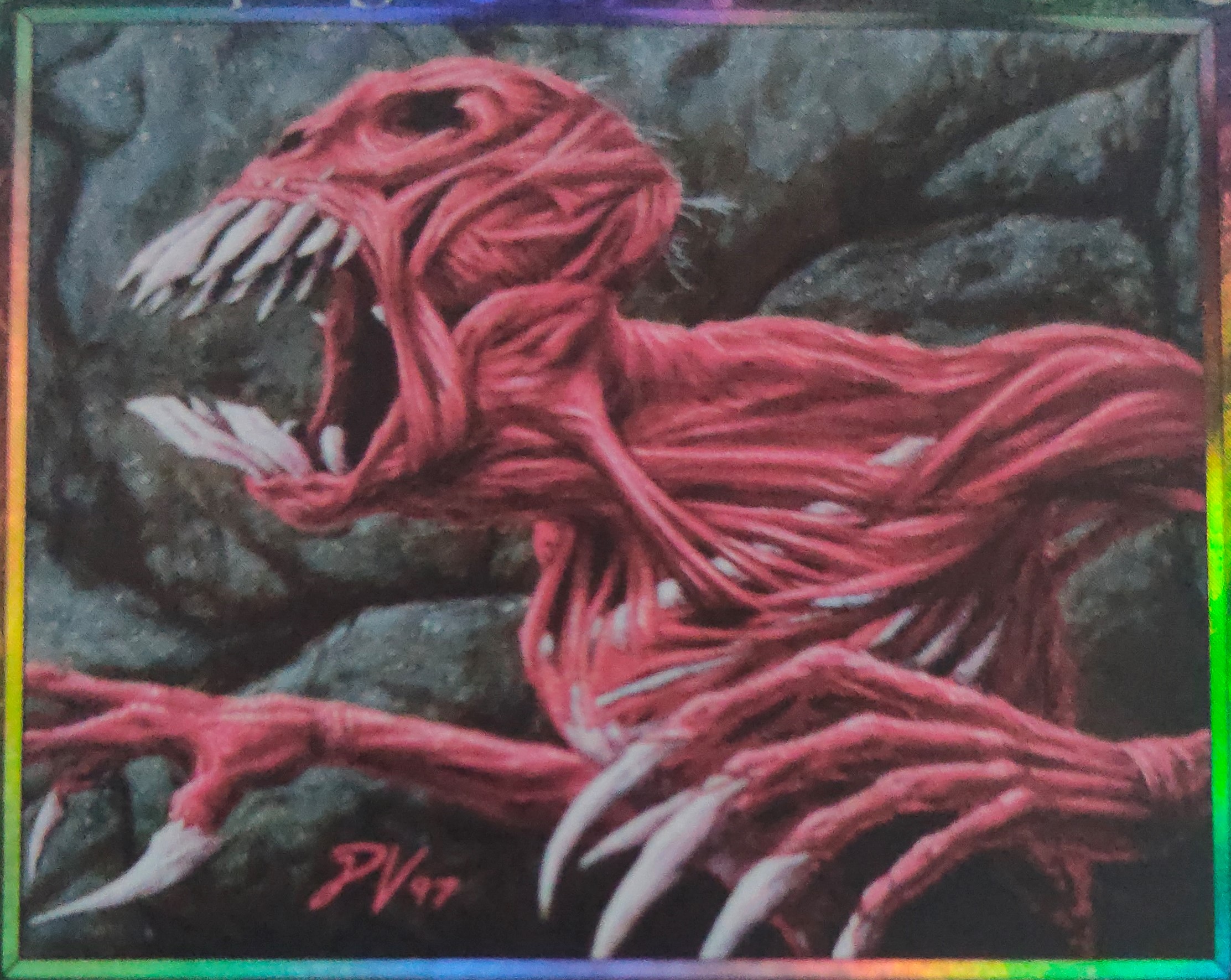 Rats, rats, rats! Hundreds, thousands, millions of them, and every one a life.

In the past two articles, we analyzed two English-speaking authors, namely Coleridge and Poe. Despite their differences, both writers share a tendency toward themes of horror and fear. As we discussed, that is why they were mostly quoted on black or dark-feeling Magic cards. However, they are not the only authors of this kind appearing in Magic flavor. In this installment, we are going to discuss a few more cards whose flavor texts range from ominous to purely horrific.

The quotation above comes from Stoker's epistolary novel Dracula, a masterpiece of gothic fiction and one of the most quoted horror works of all time. Before moving to Stoker, however, let's start with a much more ancient author, the father of Italian literature Dante. 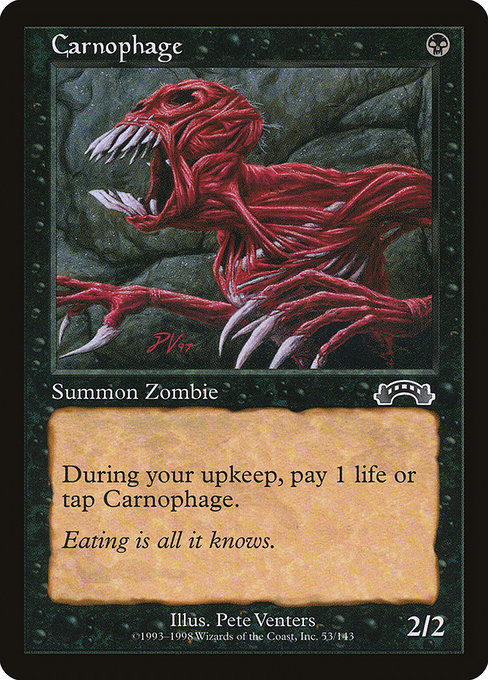 And in their blind and unattaining state / their miserable lives have sunk so low / that they must envy every other fate.

First printed in Exodus (1998), Carnophage is an all-star of mono-black aggro decks, and especially of tribal zombie decks. The flavor of its first printing, “Eating is all it knows,” is already memorable. With the card's Friday Night Magic promo reprint (2001), it received an epic quotation from no less than Dante Alighieri.

This is one of my all-time favorite quotations. It also makes for one of the most horrific phrases to appear on a Magic card. from Dante's Inferno 3, 43-45, it's the only quotation of his used on a Magic card. It's also notably one of the few cases where the translator is explicitly mentioned. We are talking about American translator John Ciardi, who published his translation of Dante's Inferno in 1954.

Three verses are quoted on the card. The speaker of the lines is Virgil, Dante's guide through Hell and Purgatory. His guide shows Dante how the souls of the “Ignavi,” those who in life have never taken a side either good or evil, are punished for not choosing. Their punishment is constantly running after a meaningless sign while being poked endlessly by wasps and flies.

This is not the most spot-on of image-quotation couplings in my opinion. The zombie illustrated by Pete Venters is a solid creature and not a spirit. Even the name Carnophage quite literally means “flesh-eater.” The quotation doesn't make sense in this context even when the souls described by Dante are getting eaten by swarms of insects. Still, I like how both the quotation and the illustration succeed in displaying pure pain and misery. 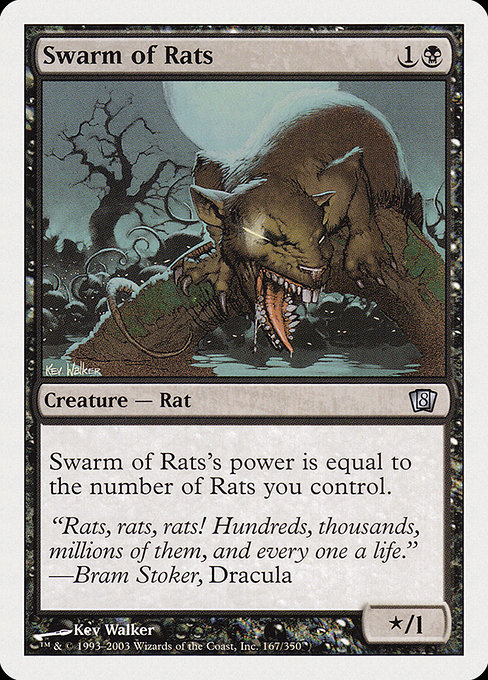 Rats, rats, rats! Hundreds, thousands, millions of them, and every one a life.

Swarm of Rats first saw print in the beginners set Portal (1997). It was reprinted a few times after that. Starting with Eighth Edition (2003), it got this quotation from Bram Stoker’s Dracula. This rat costs two mana and its power grows depending on the number of rats you control. Its toughness always stays at one, which doesn’t make it particularly reliable. In spite of that, it’s a great kitchen-table card. It surely made many new players try and build a tribal deck based on rats.

Taken out of context, the sentence quoted on this card is not impressive. However, if you know the context, things change a lot. Swarm of Rats might even become the most disturbing card of the game. The excerpt comes from a monologue by Renfield, a psychiatric inmate suffering from delusions. Renfield has the habit of eating insects, spiders, and even birds. Not nice. Van Helsing is interrogating him, and he tells his story. Apparently, he believes that eating living creatures will provide him with more and more life, making him immortal. As you can see, the swarm of rats by itself is not the worst thing. 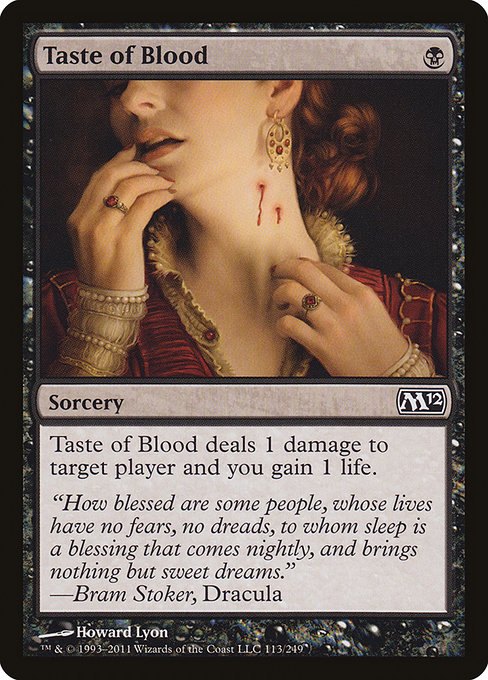 How blessed are some people, whose lives have no fears, no dreads, to whom sleep is a blessing that comes nightly, and brings nothing but sweet dreams.

This is a special case of a dark quotation. In fact, it does not depict anything bad. Instead, it works by subtraction, by opposition. It mentions people who live in peace and whose dreams are good. The effect, however, is to evoke the opposite, especially if you again know the context of the source material.

The person speaking (or rather writing) is 19-year-old Lucy Westenra, the first victim of Dracula in England. Lucy keeps a diary, and in this entry, she describes her sleeping issues. Right before the quotation, we can read: “Oh, the terrible struggle that I have had against sleep". And later on: "The pain of the fear of sleep, and with such unknown horrors as it has for me!”

The choice to quote Dracula on a card called Taste of Blood is a little on the nose, but it works. The illustration portrays a young girl with vampire marks on her throat. At the same time, she seems to be already drawn to the very flavor of blood. Perhaps she is transforming into a vampire herself, just as Lucy in the novel? The flavor text sounds much less reassuring. 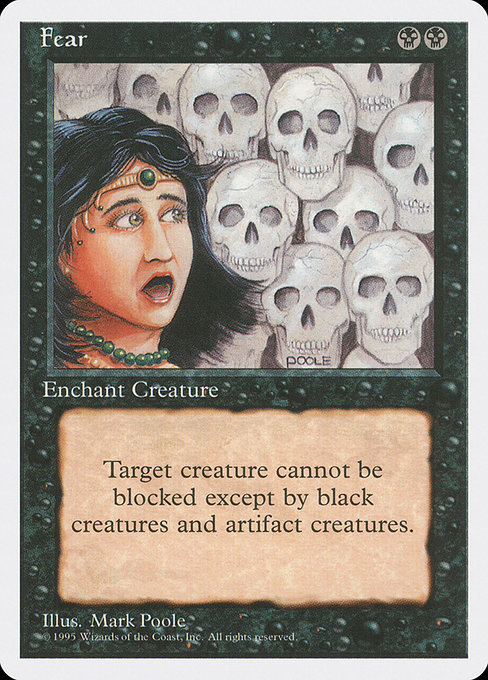 One of the most recognizable quotations in Magic comes from Joseph Conrad’s Heart of Darkness (1899). It’s a brief quote, but it’s effective — especially on a card called Fear. The character pronouncing the sentence is Kurtz, and these are his last words before dying. Here's more of the quote from Conrad:

Anything approaching the change that came over his features I have never seen before, and hope never to see again. He cried in a whisper at some image, at some vision—he cried out twice, a cry that was no more than a breath: “‘The horror! The horror!”

The horror he’s talking about invests his whole life and his destiny. It’s a final, bitter judgment on the evil nature of humankind and colonialism. Nothing specific is mentioned, and still, it evokes every kind of vile and wicked deed. In this case, there is also a nice, additional treat, since most readers will be familiar with Coppola's Apocalypse Now.

The film, from 1979, is an adaptation of Conrad's novella, even though the setting moves from Congo to Vietnam. More importantly, the very character of Colonel Kurtz pronounces the same line, one of the most famous of modern literature and cinema. We can all visualize Marlon Brando's chilling interpretation.

Again, the card's power level and its flavor text are not necessarily on the same level. An aura giving Fear for two mana is not memorable at all. This brief and powerful quote, on the other hand, is sure to have an impression on many players.

We only analyzed four cards this time around. There is a common thread running through these quotations, though each is somewhat different from the others. The only quote in verse is from Dante's Inferno. The other three come from a novel and a novella, and are in prose. Apart from these matters of stylistic presentation, what I find more interesting is the different shades of horror they deliver.

Carnophage's text directly describes a dreadful scene, whose setting is literally Hell. It shows victims being punished eternally, and it's quite obvious how such a scene affects the viewer. Swarm of Rats is somehow similar, as its text also portrays a concrete scene. What is really frightening here is not the pack of rats. Rather, it's the awareness of what they represent to the (unmentioned) human figure who's speaking.

With Taste of Blood we pass to a slightly less violent kind of horror. The excerpt only evokes nightmares by mentioning sweet dreams. It is up to the reader (or in this case, player) to complete the picture with their own sensibilities. This is, after all, the case with any kind of good literature, is it not? Finally, we have the tragic, mighty briefness of Fear's flavor text, a great example of how to conjure the worst you can think of without even saying it.

In the course of this installment, we moved between different ages and languages, with the only constant element being the emotion of fear. As we've seen, there are several ways of evoking that feeling. This is another reason why I find Magic's flavor texts so captivating. In this series, we are only dealing with real-world quotations, but we all know they only represent a tiny fraction of the full corpus of Magic flavor.