Magic has a lot of rules, but talking about them in a vacuum can get pretty boring. This week, I'm going to talk about some of the goofy stuff I can get up to with my very favorite Commander deck, Spy Cat! helmed by Nazahn, Revered Bladesmith. At its core, it's a goofy Selesnya combo deck that depends on some truly atrocious cards. In fact, it hinges on a card that many players have probably never heard of: Verdant Succession. 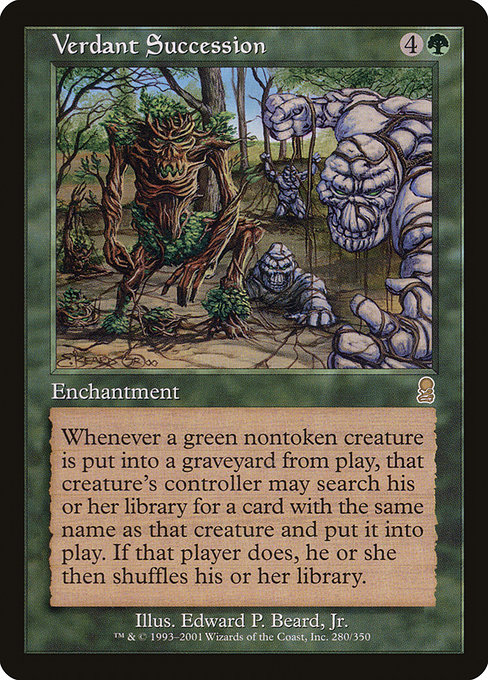 Most people's first look at this deck involves a question about Verdant Succession. Sometimes they innocently ask "What does that card do?" because they've never seen it before. Sometimes they make it more of a statement, like "That card doesn't do anything in Commander." In my favorite games, people see it, read it, and then go "...okay?" and ignore it, because they don't get it. But they'll get it very soon. Oh, yes they will.

See, they're right that Verdant Succession doesn't do much of anything on its own. However, Spy Kit exists. You see, one of the finest parts of Magic deckbuilding is taking two bad cards and combining them into something cool. So that's what we've done here.

Spy Kit is one of those cards with the dubious distinction of being called out specifically in the rules.

So let's say I have a Devoted Druid equipped with Spy Kit. When the Druid dies, it last existed on the battlefield with all names of nonlegendary creatures. As far as Verdant Succession is concerned, this means that Spy Kit has "the same name" as every other nonlegendary creature in my deck, thanks to this rule (emphasis added):

In short, if a creature is equipped with Spy Kit and it dies while Verdant Succession is out, I can tutor any nonlegendary creature in my deck directly onto the battlefield.

Note that Spy Kit has similar interactions with Bifurcate and Pack Hunt. Bifurcate can target a Kitted-up creature to tutor any other creature directly to the battlefield. Pack Hunt, meanwhile, can get three creature cards into hand for the low cost of 4 mana. 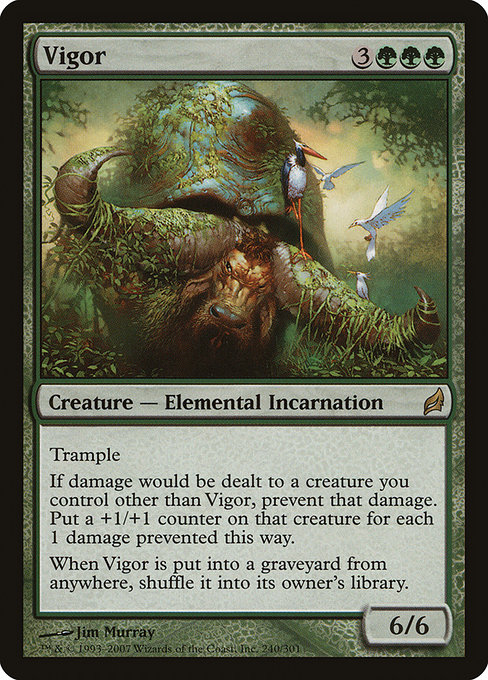 Cards with triggers that put them back in your library when they go to the graveyard work great with Verdant Succession. Let's say my Vigor dies while I have Succession in play. Since I control both triggers and they want to go on the stack simultaneously, I can choose their relative order on the stack*. This means I can choose to shuffle the Vigor into my library, then get that same Vigor with Succession's trigger.

Looping Vigor like this doesn't do much on its own. It needs support from something like Ashnod's Altar to make tons of mana or Greater Good to draw a ton of cards. Some other all-stars can loop to great effect, though. Looping Worldspine Wurm results in as many 5/5 Wurm tokens as I want. Looping God-Eternal Rhonas makes the rest of my creatures very large.

In a pinch, I can even slap together Succession, Ashnod's Altar, and Soldevi Digger to loop any green creature.

Importantly, this loop requires that the creature has a trigger to shuffle it in, not a replacement effect. Since something like Blightsteel Colossus never hits the graveyard, it never "dies"; it won't ever trigger Succession, even if the Colossus were somehow green.

* Check out this article for a refresher on handling triggered abilities 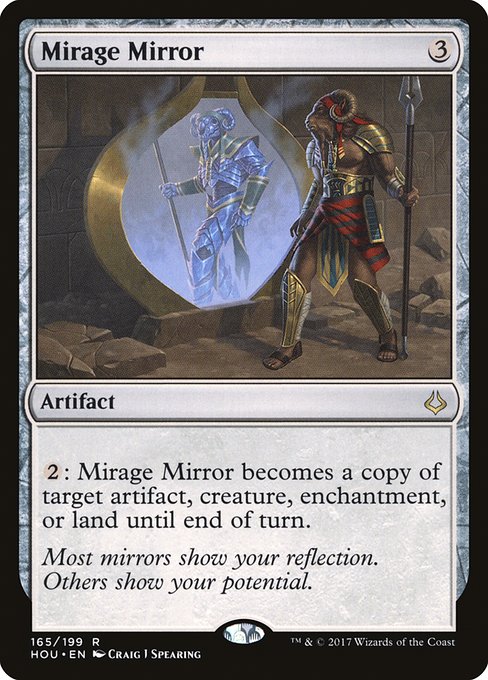 Mirage Mirror may be my favorite card in all of Magic right now. I've been high on it since it was first spoiled. The flexibility to become practically anything is just... beautiful. But what does it do for us here?

Worldspine Wurm makes a great blocker, and sometimes I need to keep it around to fend off an opponent's giant creature. Make the Mirror copy the Wurm, sacrifice the Wurm to something, and boom - you've got the 15/15 Wurm and three 5/5 Wurm tokens. As a bonus, since being put into a graveyard "from anywhere" triggers don't look back in time, the Mirage Mirror in your graveyard won't have the trigger to shuffle it into your graveyard. It'll wait there for me to get it back with an Eternal Witness or something.

In desperate times, it can work as a very narrow replacement for a sacrifice outlet. If Mirage Mirror copies God-Eternal Rhonas, I can get rid of the "real" Rhonas to the legend rule. With Verdant Succession in play, this becomes a janky loop enabler.

The greatest tragedy of Mirage Mirror is that it can't usefully copy some of the best enchantments, like Defense of the Heart. Since no player gets priority before the upkeep step starts, it's never possible to make the Mirror a copy of Defense in time for the Mirror-Defense to do anything useful.

This deck has a ton of different lines and angles to play with, some more convoluted than others. I only touched on some that involve a little more rules info than "make a lot of dudes," but hey, if you're curious about it, I would love to talk about this deck with you. Seriously, it's one of my favorite things I've ever helped build. You know the drill by now -- come at me on Twitter or our Insider Discord.

Question of the week: What's your favorite very silly enchantment?