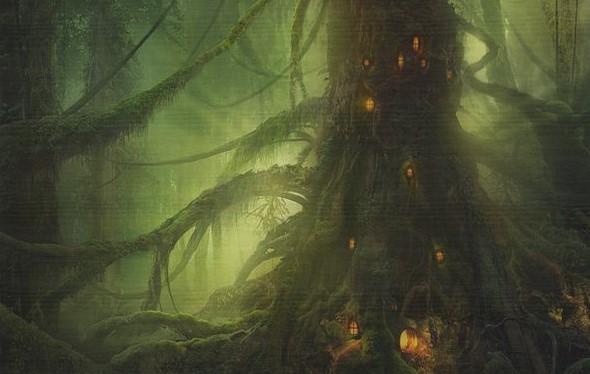 The love of nature […] is a furious, burning, physical greed…

What's better than the concept of "nature" to evoke the philosophy of the color Green? The flavor text above is clearly referring to a green card. And Green might easily be the color with the strongest connection between its mana symbol (a stylized tree) and its philosophy. So, what is Green about, and what do Forests have in common with that?

Just like with Red, there are not that many green cards with real-world quotations for flavor text. Black and White are by far the most widely represented, with Blue somewhere in the middle. we have already dealt with the most interesting green cards in the past. However, there are still plenty of spells from this color we've yet to discuss that do an excellent job of embodying the philosophy of Green. Let's look at what that philosophy is, and then look at some representative cards and their flavor.

Green is the last color in the Magic: the Gathering color pie. Its allies are Red and White. The first thing that comes to mind when thinking of the color is simply the concept of Nature. What else? We could also mention peace. Green doesn't try to change the natural course of things. In that, it's similar to its allied color White. On the other side, Green is also wild and relies on instinct rather than calculation. This puts it in alignment with its other ally Red.

How does green put into practice such beliefs? First of all, green wizards tend to live in peace with nature and do not alter the natural world. Sometimes, they can even get aggressive, when it comes to dealing with those who disrespect nature. For instance, one of Green's enemies is Blue, due to its drive towards inventions and artificial creations. Its other enemy is Black, due to the color's love for interfering with the natural course of life. In gameplay terms, we see Green's attributes reflected in its hate for artifacts and flying creatures, and its abundant mana. 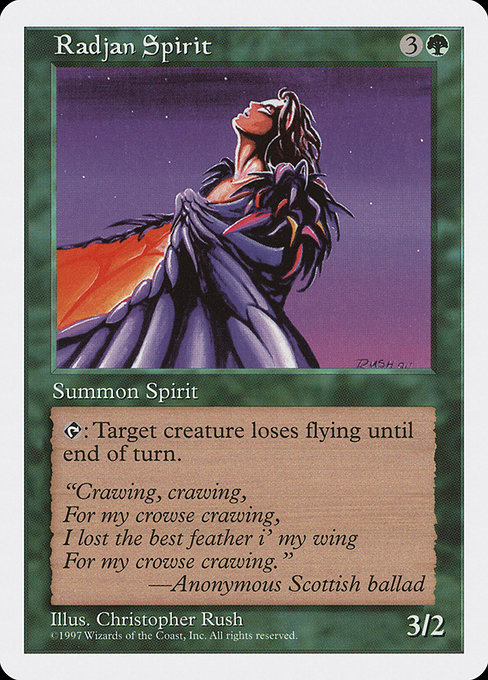 Radjan Spirit is a great example of Green's hate for flying creatures. Flying creatures are most commonly found in the color Blue, which, as we already discussed, is one of Green's enemies. Green has many ways of dealing with flyers. From creatures with reach, to kill spells that target them.

In this case, Radjan Spirit is a 3/2 creature for four mana with an ability that allows you to remove the flying from a target creature. While not the strongest of creatures, it's a good example of Green's dislike of flyers. 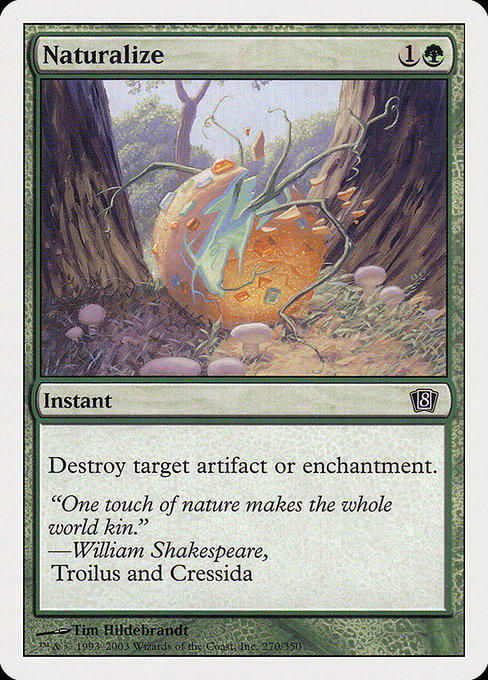 One touch of nature makes the whole world kin.

There is something else, though, that Green hates even more than flying creatures. I'm talking about the opposite of Nature: Artifacts. And, secondly, also Enchantments. But Artifacts are definitely the worst.

Again, green wizards don't like people to interfere with Nature, which means they hate artificial creations of any kind. Naturalize costs two mana, and it allows you to destroy any target Enchantment or Artifact at instant speed. It's a typical sideboard card, and the flavor text by Shakespeare is a nice addition, with its mention of nature and the concept of seeing the whole world as connected. 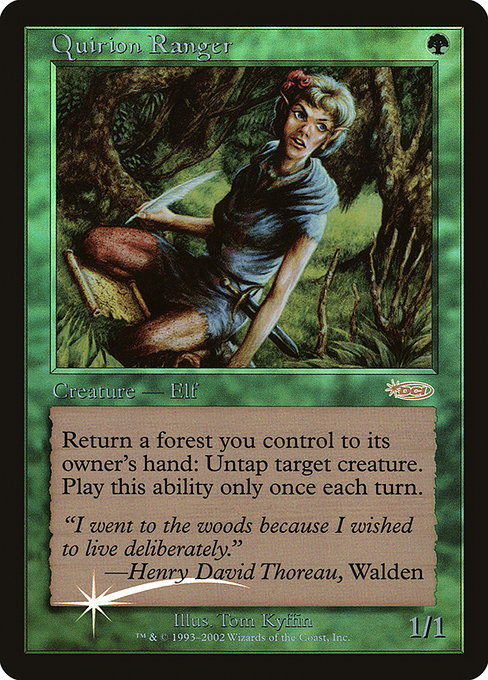 I went to the woods because I wished to live deliberately.

Nature, unity... what is missing? Well, mana is another thing that definitely belongs to Green. Mana in Magic for all five colors is drawn from the natural surroundings of the lands. Green, and to a lesser extent red, get the ability to produce mana from other sources. In red it's often a result of elemental channeling (think Rite of Flame or Pyretic Ritual). In Green, mana production is represented by the primal life force of nature, and the ability to tap into it. This translates in gameplay terms not just into mana production, but also into mana ramping, i.e. speeding up the process of playing Lands, and mana fixing, allowing the production of mana outside its own color.

Quirion Ranger is one card that contributes to this purpose, though it might not be obvious at first glance. It's not a straightforward mana producer like Llanowar Elves. Any Elves player can tell you though, that Ranger is great because it allows you to untap mana producers like Priest of Titania and generate incredible amounts of mana. 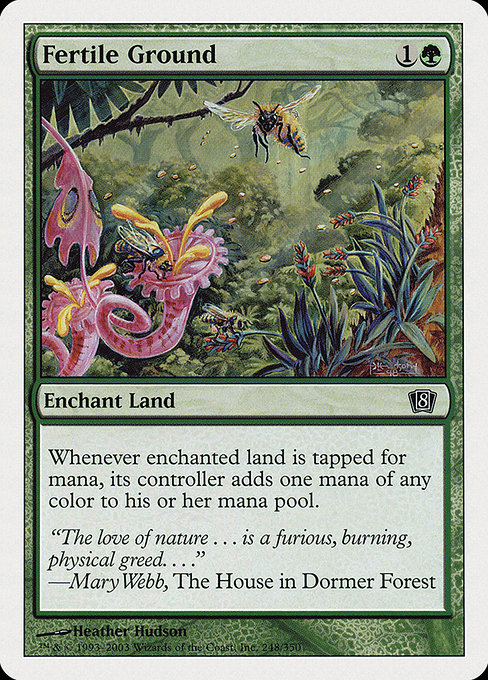 The love of nature … is a furious, burning, physical greed… .

Fertile Ground is similar, in its purpose, to the card we have seen above. However, it's an Enchantment - Aura, and thus it works a bit differently. It's part of the big family of Auras whose progenitor is Limited Edition Alpha's Wild Growth. There are many cards working the same way, and the point is to enchant one of your lands and then untap it in order to gain tons of mana.

Another card worth mentioning here is Early Harvest. Early Harvest is an Instant that lets you untap all basic lands you control. This is great when you have some other effect on the board like Heartbeat of Spring, allowing your lands to each tap for multiple mana. Early Harvest is very similar to an older card from Legends, Reset. What's funky about Reset is you can only play it on an opponent's turn, and it's a Blue spell! This just goes to show that the color pie was a little wonky in Magic's early days. It's a quite natural ability for Green to have, and another example of

As we have seen in the course of this installment, Green has an easily recognizable color identity. Its philosophy, lore, and gameplay effects all work well together. Green doesn't like to change what's naturally going on. It's the enemy of weird spells such as artifacts and anything concerning necromancy, for instance. On the other side, it relies on Nature and the unity of all its creatures. The life force of nature translates into mana production in gameplay terms, and Green allows you to generate huge amounts of mana.

What do you think of this color? What other cards would you say define the color Green and its values? Let me know in the comments or on Twitter. Stay tuned for more delving into Magic's lore and philosophy.