It is the nature of Magic content creation to focus on the top-tier decks. That's what readers tend to be interested in according to the metrics. Additionally, and arguably more importantly there's a lot more to talk about with a known good deck than a new brew. I can gush about My Shiny New Thing as much as I want, but with UR Murktide I can discuss trends in the data, specific matchup dynamics, and broader trends related to that deck. Thus, the fringe tends to be ignored except by niche streamers. This month, I'm going to do something to (slightly) correct the imbalance.

What I am going to do is go scouring the data I'm collecting for interesting, offbeat decks to highlight. It doesn't matter if I think they're good or bad, I'm looking for fringy decks. If anyone has suggestions, feel free to leave them in the comments. Having selected a deck, I'll then take it for a whirl on MTGO until I get a good feel for what it does, how well it does it, and where it fits into Modern's ecosystem. Every week in June I'll be reporting on the deck I tried out starting this week. 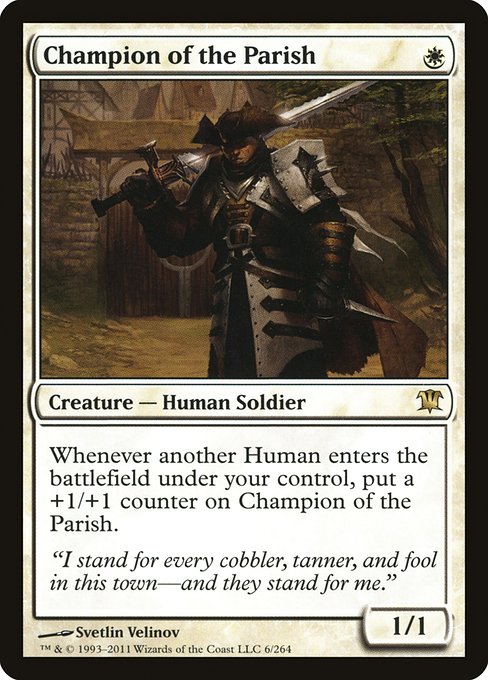 Normally, this wouldn't be possible, but this is a unique opportunity. June is MTGO's 20th birthday and Wizards is celebrating with a lot of special events. More importantly, the Mythic Event tokens are available for $25 and are good until June 29. In other words, for this whole month, you can play anything in any format and the price doesn't matter. You have every card. This is an incredible value that I doubt we'll see again soon. If you've ever considered trying MTGO, now is the time!

Sidenote: I expect this lack of financial burden to have an effect on the MTGO data for June. What kind of effect I have no idea. But when there's no financial barrier, anything is possible.

Magic is an expensive enough hobby as it is and buying digital cards that will disappear if the servers shut down is not the slightest bit appealing to me. And even with rental services, you do need to invest in key staples to actually play any deck that you want. I'm not willing to do that and so I wouldn't normally be able to switch between decks to make this happen. However, MTGO's birthday is a unique opportunity to do just that, so I'm going to seize it fully. Bring on the decks that I'd never be willing to put money into!

To be perfectly honest, this idea didn't come to me out of thin air. At my LGS' Tuesday night Modern tournament, another longtime player was gushing about some deck he'd put together online. The way he was going on about it piqued my interest, so I basically made him back up the conversation to where he mentioned what deck he was actually talking about. And was really disappointed when I learned that said deck was a hybrid of Tribal Elementals and Glimpse of Tomorrow. Because that sounded like a... well, what passes for normal with Glimpse combo deck. 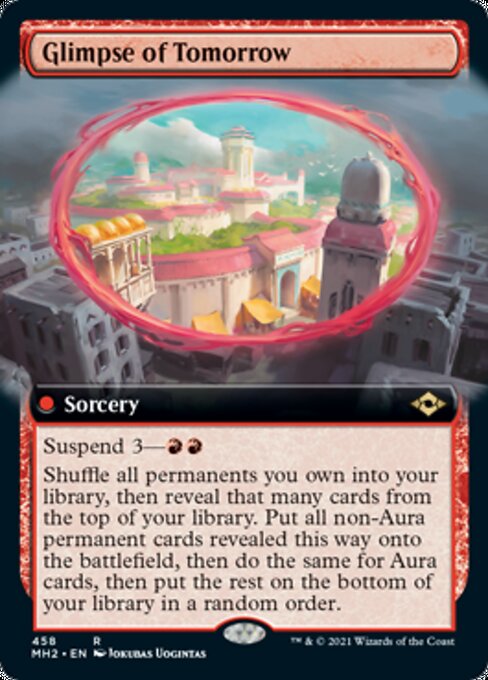 However, he was insistent that the addition of Risen Reef and Endurance to Glimpse staples (that's a load-bearing word for the archetype) Fury and Omnath, Locus of Creation solves a lot of the deck's problems. Chiefly, there's something to do when not Glimpsing. Instead, you can be a slow version of 4-Color Blink that doesn't play Solitude. And when you are comboing, Endurance lets you reuse Glimpses while Reef keeps the fuel flowing.

A Twist of Fate

It sounded like he was a bit overenthusiastic to me. Taking out the essential interaction and mana fixing of Blink and replacing it with bad cards and chaos sounds terrible. I blew the whole conversation off and forgot about it... for about two hours. Then I got home from the tournament and did the weekend MTGO data entry. And wouldn't you know it, the deck he was talking about had actually made Top 8 of a Challenge. I must have missed that part of the conversation, but it was enough to give him benefit of the doubt. Especially when I learned about the MTGO event on Wednesday. 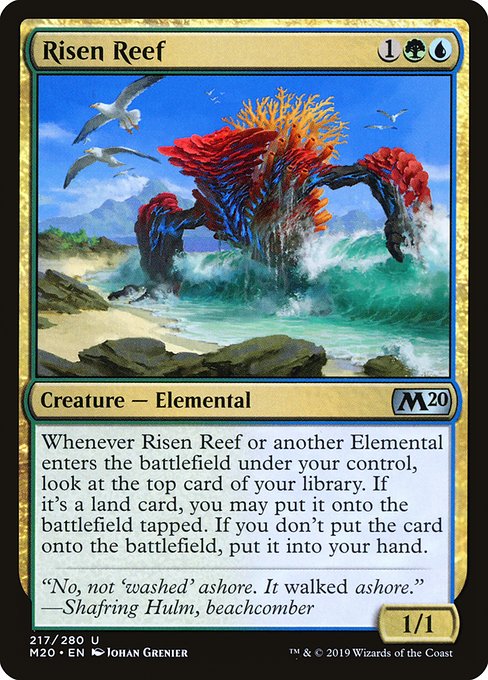 Therefore, on Thursday I made sure to get more details from my deck whisperer during the weekly Pioneer tournament. I learned that he'd made some changes, namely playing Seasoned Pyromancer over Fable of the Mirror-Breaker // Reflection of Kiki-Jiki. Why? It makes two elementals that provide two Reef triggers, that's why. Given the opportunity to see if he was right, why not grab the event token and try it out? I'm not picky about where my article ideas come from.

I tried out both the original deck and my associate's version. It was a literal carbon copy of the deck I linked above, so I won't replicate it here. As for the other version, there were a few tweaks based on what he told me. I didn't actually ask for his list because I didn't think to do so.

He mentioned Yarok, but not how many to play. I didn't want to cut any good cards for it, so I cut a Wavesifter. The land base and sideboard were taken from the Challenge deck because I didn't know what else to do.

As a Glimpse of Tomorrow deck, this looked like a half-measure. The elementals package is a vastly superior Plan B than the older, pure combo versions, and the fact that those decks didn't catch on is a vote in favor of this new version. That Plan B is heavily balanced against there being no clean Plan A kill via Glimpse. Rather than present giant spaghetti monsters and/or Progenitus for a win, it's relying on turning garbage into an overwhelming board and overwhelming card advantage. This might be good, but it's putting enormous weight on hitting Omnath and getting many triggers from him. 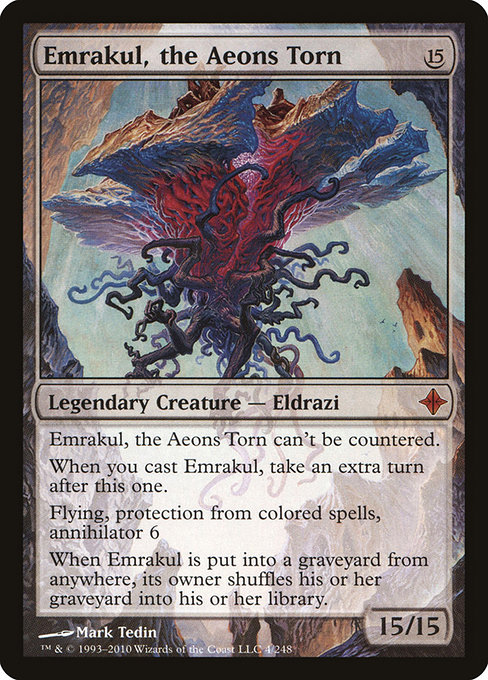 Which wouldn't be a problem according to the sales pitch. My associate was describing decking himself from all the Reef and Pyromancer triggers, killing with only Omnath triggers, and filling the screen with triggers until it nearly crashed MTGO. The phrase "self-sustaining combo with 12 permanents in play" was thrown around a lot. Even taking all that with a massive grain of salt (no, bigger than that) it did sound like it was achievable to win despite having fairly anemic creatures. And at worst I could go elemental beatdown.

To actually test this deck, I "proxied" it up on MTGO and then hit the Tournament Practice room. I'm not spending precious tickets or Play Points on this by entering a League, and more importantly, grinding games in the Practice room gives a wider range of decks to play against and I can play more matches quickly. The whole point of this is testing decks, and that's what the room is for, after all.

After playing both the suggested deck and the Challenge deck this weekend, I must conclude that either I'm fairly unlucky or the players running this deck are unnaturally lucky. Between the two versions, I played 19 matches and won 9. 3 of those wins were with the suggested deck and the rest were with the Challenge version. That's not a great win/loss record by itself, but the context of those wins makes it worse. I only beat 1 Tiered deck when that deck was actually doing its thing. That deck was Tron and I had to overcome Karn Liberated multiple times by evoking Fury and then casting Violent Outburst. All the other wins were the result of my opponents playing bad decks, playing badly, or having bad variance. 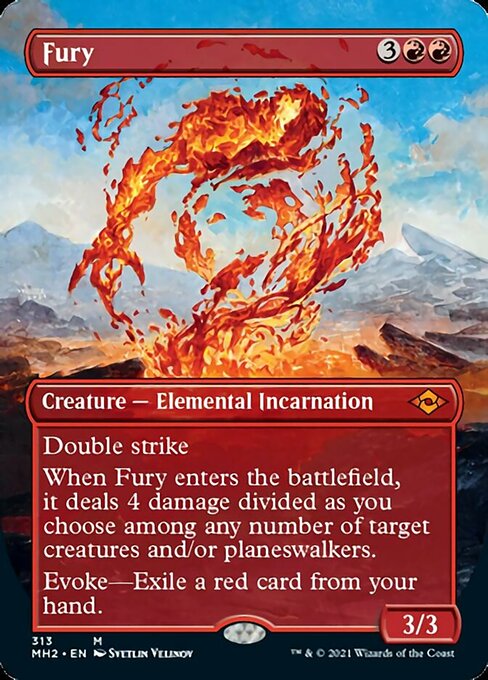 For all that salesmanship about massive board presence and a self-sustaining combo, I only had that happen once. Mostly, I just sat around and watched my permanents get eaten. Sometimes my opponent gave me the time to gradually build into something, but I always felt behind if my opponent was doing anything. When you go for the combo, there's no way to know what will happen. Sometimes you randomly improve your board but ending up with the same or a worse board is equally possible. There's no consistency.

There was a lot that went wrong with this deck while I was trying it. To get a sense, I strongly recommend watching this video (which was posted the same day I'm writing this) from Gabriel Nassif playing the Challenge deck. He ends up with a better record than I did, but his experiences and complaints are similar to mine. 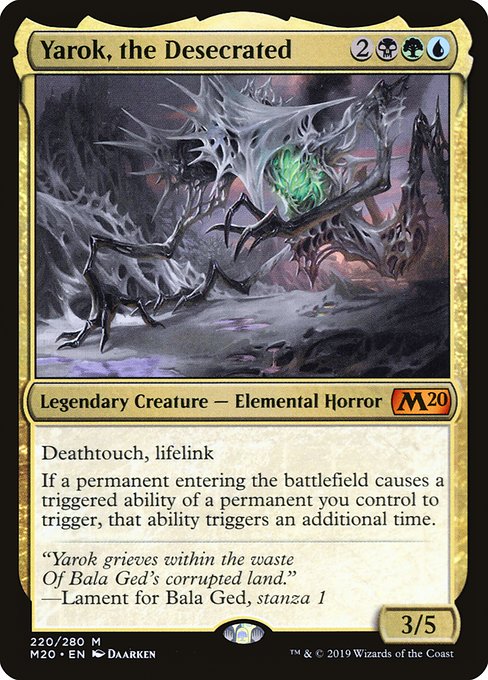 Is everyone on the same page now? Alright, the problem is that for all the new technology, this is still the same Glimpse deck we've all already seen. It has the same big-win potential and fundamental weaknesses. Turning a board of junk into something game-winning with the roll of the dice is an amazing feeling. The deck is fully capable of coming from massively behind with a good Glimpse and that is quite appealing. 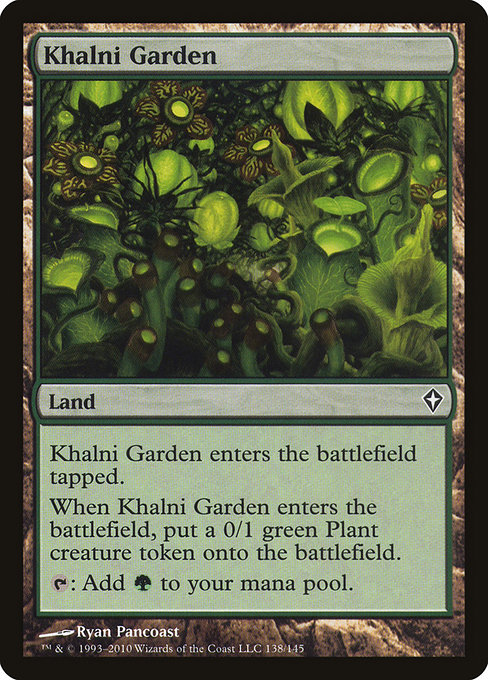 However, Glimpse is a deck that requires a large board presence to do its thing. It can't play accelerants or most cheap token producers, so it leans heavily on Khalni Garden and Wavesifter to have something going on by turn 3. The best-case scenario is three lands, a plant, two clues, and an evoked elemental followed by Outburst on that turn. Getting seven new permanents isn't terrible, but the odds of a good result aren't great either. Really, this combo deck needs to wait as long as possible before trying to combo and the opponent may not give you the time to make it happen.

My notes are a lengthy list of gripes about how slow this deck is, punctuated by some additional observations. In no particular order:

If Glimpse of Tomorrow was going to become a metagame-shaking force, it would have done so already. The problems I had with this particular expression of the deck are nothing new. The fact that solutions haven't been found already indicates that they might not exist. Thus, this deck isn't going to substantially impact the metagame. 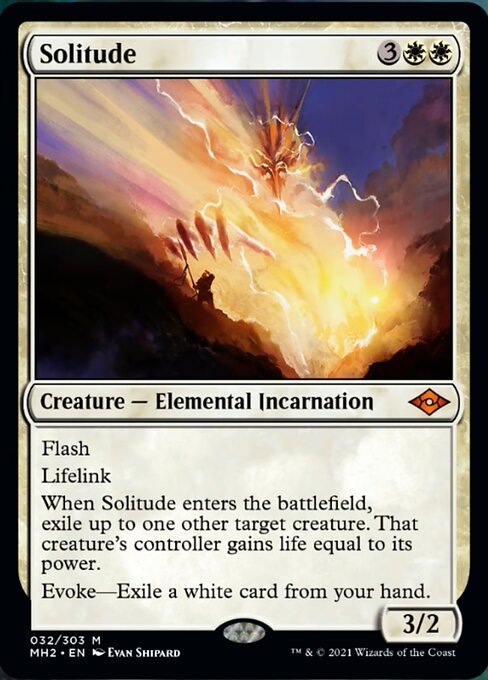 However, it is quite fun to spin the wheel and see what happens. If you can focus on the big wins and the thrill of the unknown, this deck has both in spades. I wouldn't pick up this deck for serious play. But as something to bring out to have a laugh with and get some shouts of excitement and surprise at FNM, this is a solid choice. However, if you want to win consistently, just drop the Glimpse package and run white cards. They're good now, and Blink is a good deck.

The Wheel of Fate

Magic is a game filled with randomness. It's a large part of the appeal. For those who embrace the madness, there is a lot of fun to be had. That doesn't necessarily translate into wins, but it is fun. And for some players, that's all that matters.