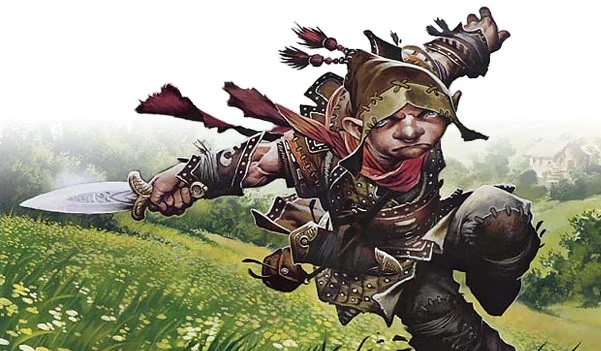 Last week we kicked off Magical Creatures, a series dealing with the unique living beings that were created specifically for this game. We began with the first set to ever introduce creature types that are unique to this franchise, namely Antiquities.

As we continue in chronological order, today's instalment turns to Legends, which introduced two new types of creatures to the world. But first, let's start with a quick overview on this beloved expansion set, which was released in June 1994.

The Legend of Legends

The third set in Magic, Legends is nowadays among the most sought-after expansions in this game. It contains an astonishing number of valuable cards. To mention a few: The Tabernacle at Pendrell Vale; Chains of Mephistopheles; Moat; Eureka. It was also the first set to be sold in 15-card booster packs rather than starter decks.

Some valuable cards from Legends 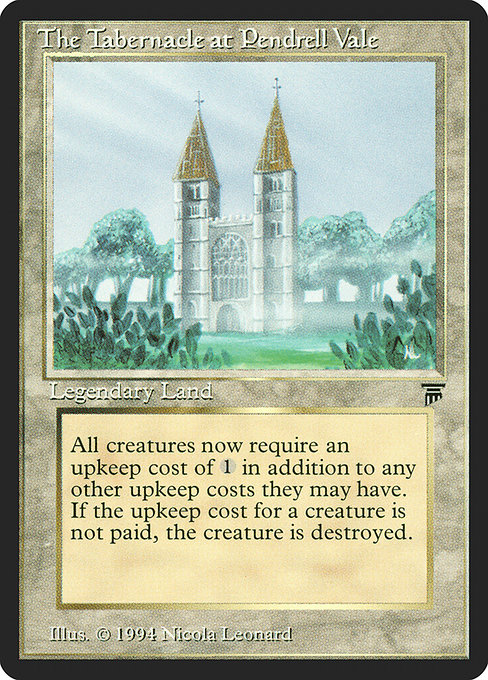 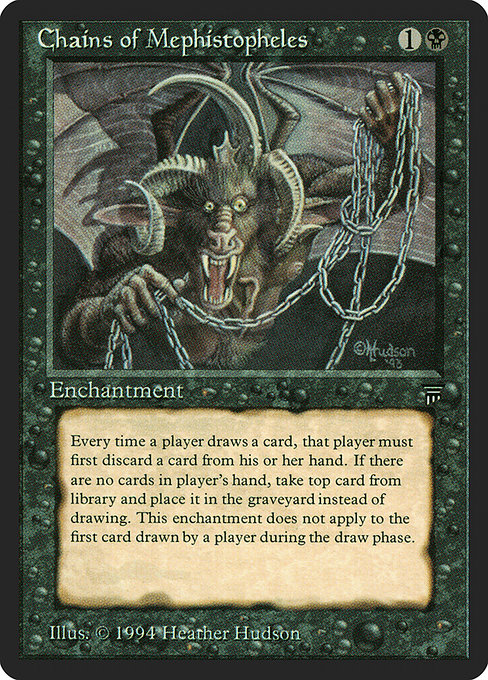 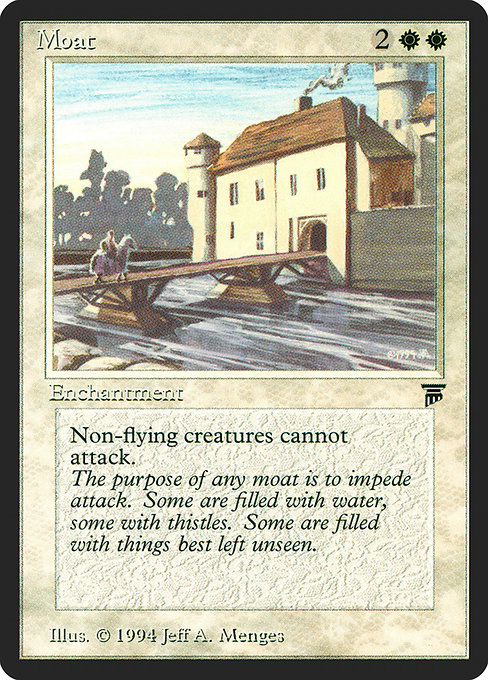 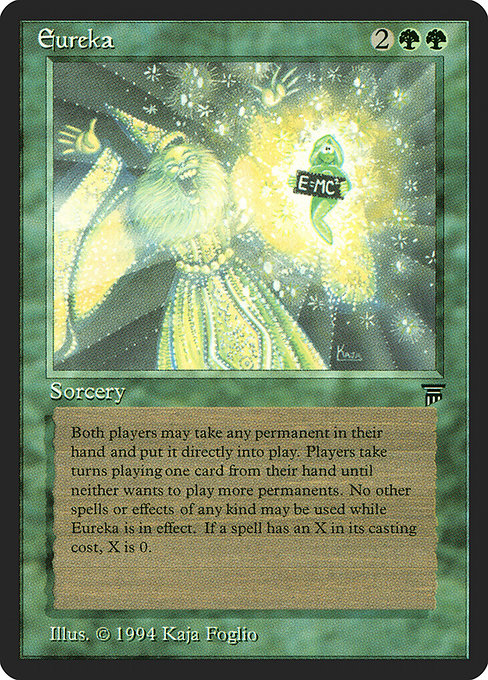 Apart from its monetary value, Legends was crucial from a game development perspective. Both multicolored cards and the Legend creature type were introduced for the first time. Legends were meant to be special, unique permanents representing famous characters or places. Many years later, with Champions of Kamigawa (2004), the creature type "Legend" would become the supertype "Legendary," with an adjustment of the ruling.

Legends heralded almost 70 new creature types. Funnily enough, most of them were altered or removed later on. However, among all these types (including Bat, Kobold, Phoenix and Yeti), only two were created specifically for the Magic franchise.

Whereas Tetravites are colorless and Atogs appear equally in each color, these two types are mostly linked to a single respective color: white and black. Those types are Kithkin and Nightstalker.

Kithkin, despite only achieving fame in 2007 with Lorwyn, were in fact first conceived in 1994, with the expansion Legends. Only one creature with this type existed back then: Amrou Kithkin. What is a Kithkin? And what is Amrou? These questions must have haunted several Magic players of the time, as neither of these answers were given. Today, we know Amrou Haven to be the homeland of the Kithkin, and it was located in the biggest of Dominaria's continents, called Jamuraa.

But what about the term "Kithkin?" We know now that these creatures were originally meant to be named "Hobbits." However, in order to avoid issues with the rights-holders of Tolkien's legacy, Wizards opted for this brand-new word. The term comes from the expression "kith and kin," which is ancient English for "friends and family." According to Brady Dommermuth, Magic Creative Director, "The Kithkin are a 'near-human,' white-aligned race who tend to have a strong sense of community, simplicity, and forthrightness." 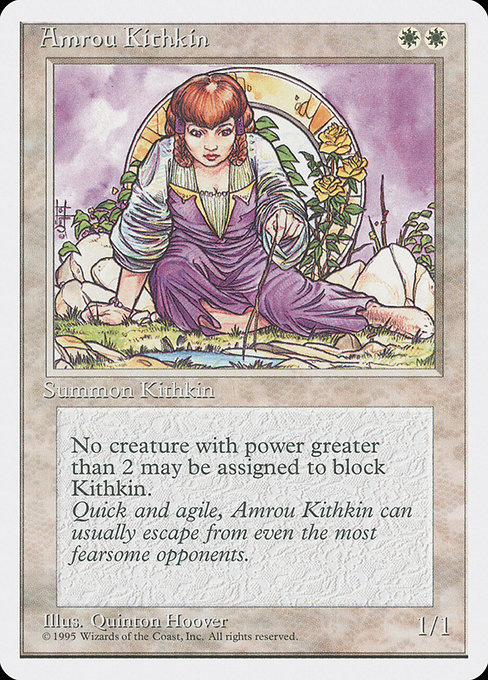 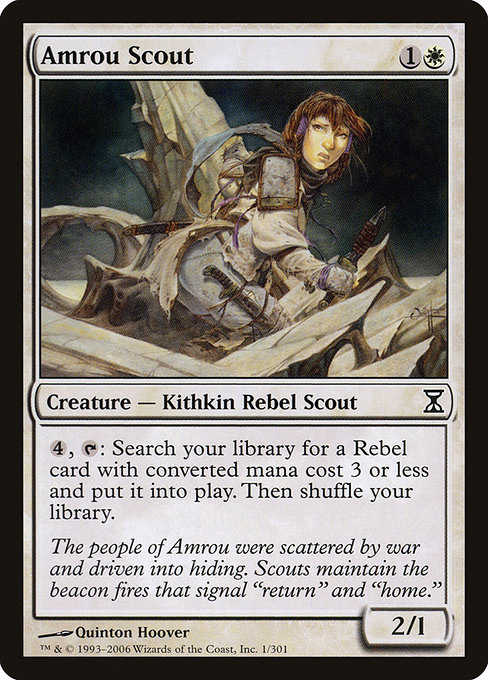 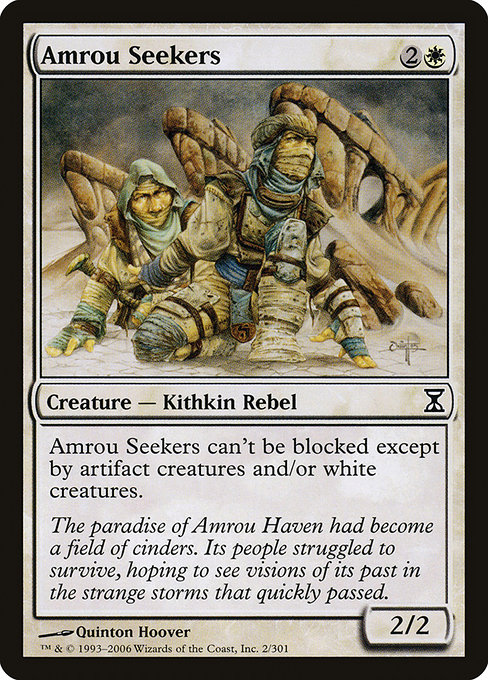 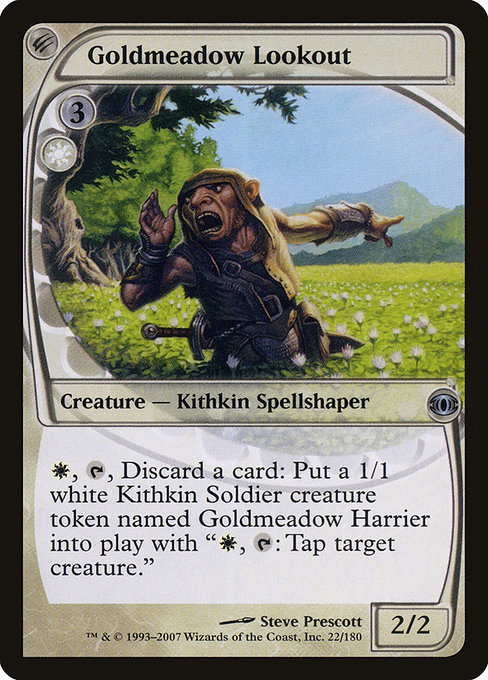 After that single creature, no more Kithkin saw print for twelve years. And even when Time Spiral came out in 2006, only a couple more were created. You might remember Amrou Scout and Amrou Seekers, both mentioning the original home of Kithkin. Finally, with Future Sight (2007), it was time for Goldmeadow Lookout, a timeshifted card from the future.

The first two cards were more Rebels than Kithkin, and they were only conceived to generate hype for the following block. Even more so for Goldmeadow Lookout, which was able to generate tokens named Goldmeadow Harrier, a card that didn't even exist yet but would be printed a few months later.

A New Era for Kithkin

Well, so much for Kithkin in the pre-Lorwyn era. Only now do things get interesting, as the two mini-blocks of Lorwyn and Shadowmoor featured over 50 new creatures with the Kithkin type. And they were now viable for competitive play, too!

Lorwyn, the 43rd expansion set of Magic, was the first of four sets relying heavily on the tribal theme. The last time this happened was back in 2002, with the Onslaught block. This time, however, the release of new sets was carefully planned to coincide with the grand creature type update discussed at the beginning of this series.

In that short period of time when Kithkin were a thing, they were huge. Many competitive lists were played in Lorwyn Block and Standard tournaments, relying on the tribe's speed and consistency. That deck was able to quickly win the race, with the help of fast creatures such as Knight of Meadowgrain, Wizened Cenn and Goldmeadow Stalwart.

Some key cards for the Kithkin deck 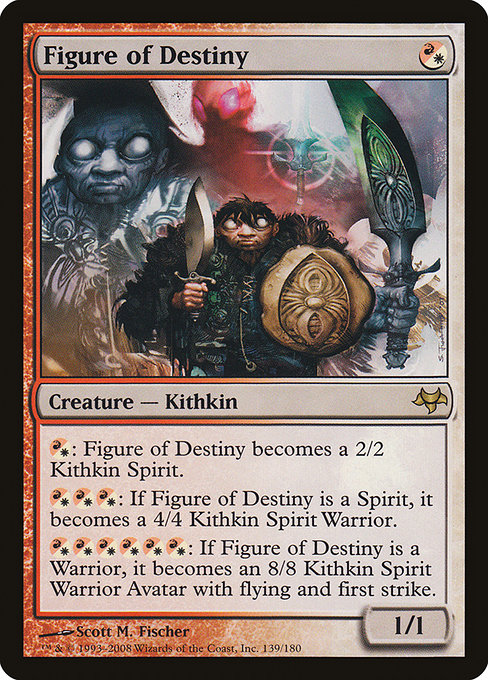 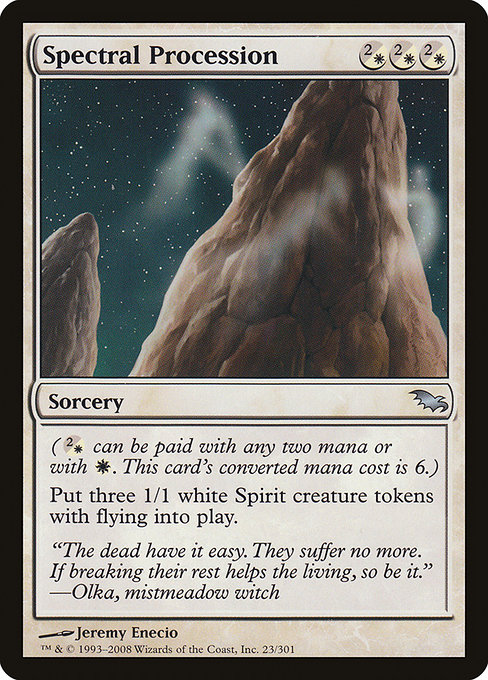 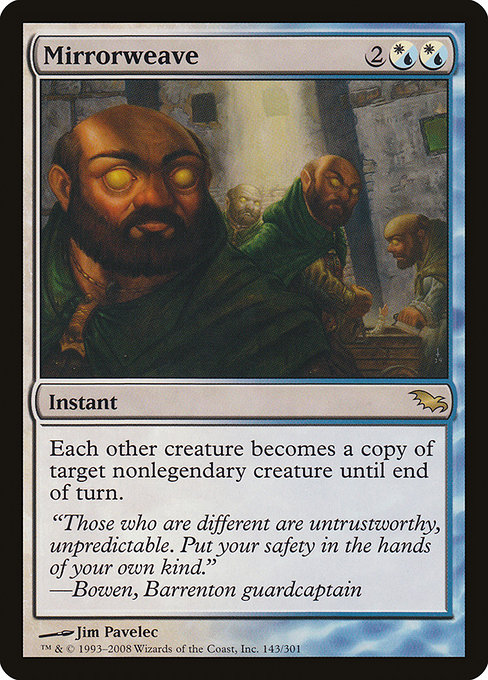 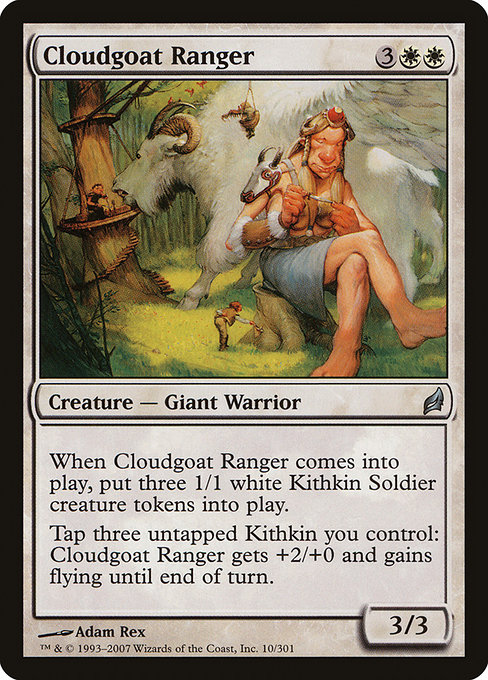 And it was also able to play some tricks in the late game thanks to Windbrisk Heights, Thistledown Liege and Mirrorweave. In 2008, Kithkin even made its way into the Top 8 at Worlds, piloted by Estonian player Hannes Kerem!

But wait, no more Kithkin were created after Lorwyn, although almost 15 years have already passed. How come? Apparently, they weren't particularly beloved. According to Mark Rosewater, market research showed that they were actually considered to be creepy! What do you think?

Nightstalkers too were born in Legends, but only existed on a single card for a while. Shimian Night Stalker's type was that of "Night-Stalker." The same was true for some more Stalkers printed in Mirage.

Later on, with the advent of Portal: Second Age (1998), others came out without the hyphen. The confusion was only resolved with (you guessed right) the grand creature type update. 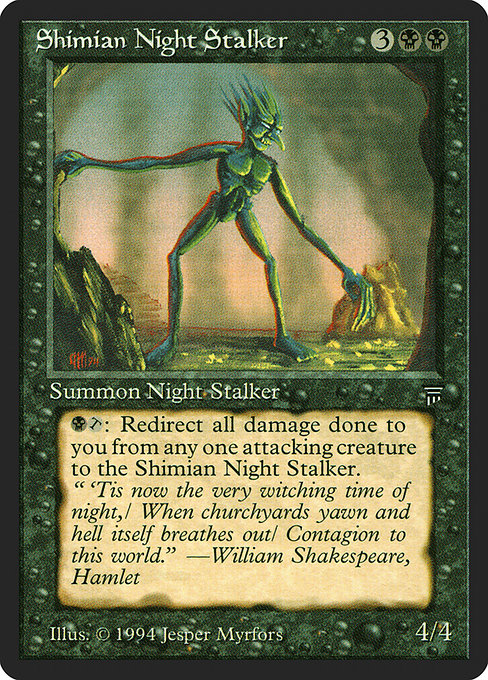 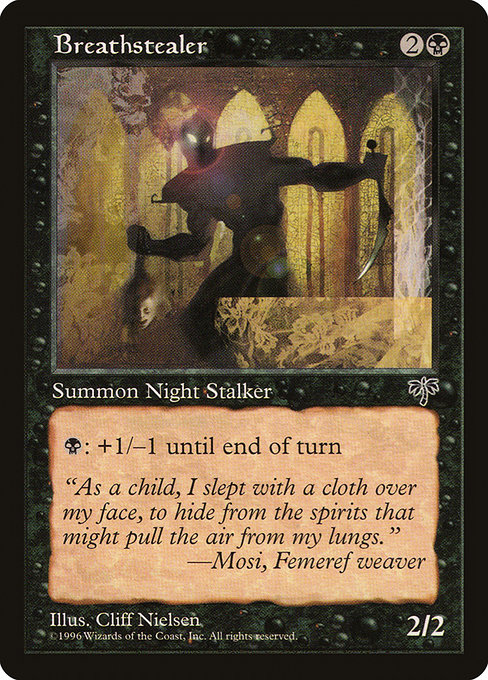 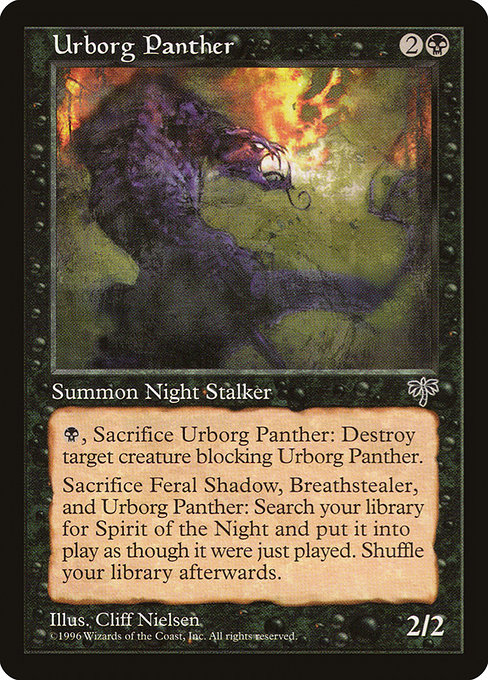 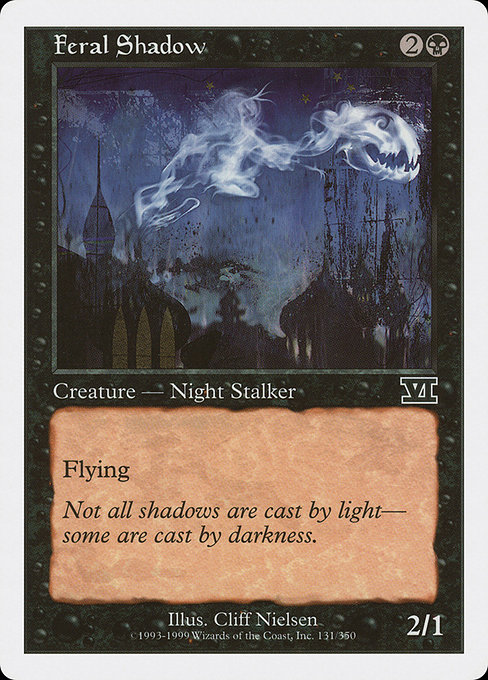 Today, 13 different Nighstalkers exist, and none of them is particularly rare or useful for competitive play. Regardless, they remain a very special kind of creature, and I'm especially fond of the original card, Shimian Night Stalker. We have analyzed it in more detail during my previous series, as its flavor text deserved special attention. If you missed it, check out my piece on horror-themed quotations from the set Legends.

What about their nature? As you might guess from their name, Nightstalkers only come in black. They are dark, malevolent creatures of the night. Despite their semi-humanoid shape, they are totally not human, as you can see from their long limbs and sharp teeth.

Portal: Second Age, as well as changing the spelling of this creature type, contained a bunch of new Nighstalkers. Seven, to be more precise. Again, nothing extraordinary when it comes to the power level, but at least these creatures became more consistent.

First of all, each Nightstalker printed in this set got the word "Nightstalker" in its name, making it easier for new players to see the pattern. I'm not saying it would have been difficult otherwise (you can't miss those looks) but remember that it was a set for beginners.

More Nightstalkers (and easier to spot) 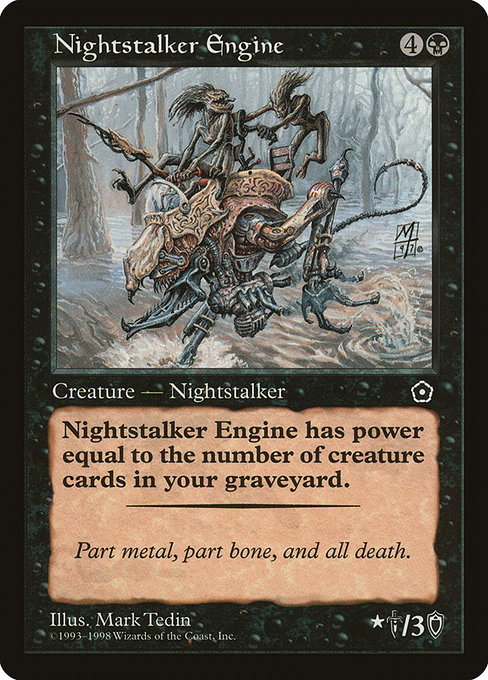 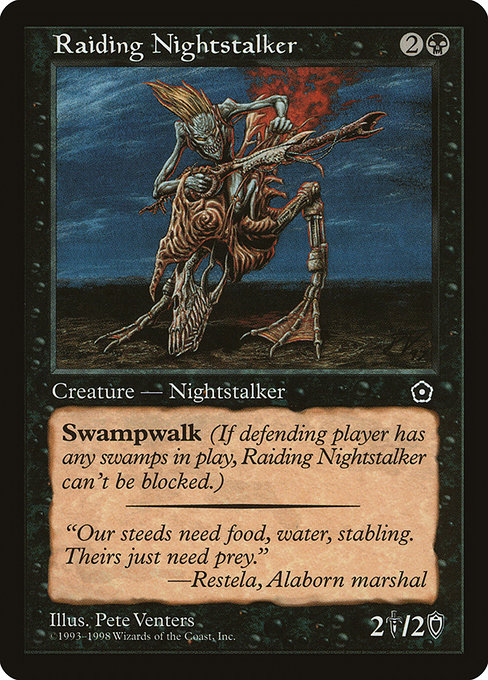 In this piece and in the last one, we mainly dealt with two important creature types: Atog and Kithkin. Both were types created in a certain set, then was left alone for a while. Until popping up again a few years later and getting an enlarged family.

There are also some differences, of course. Atogs are not as numerous as Kithkin, and yet they were printed in more sets. In both cases, though, we haven't seen a new one for a while. Do you think they might return again in the future? What other creatures would you like to see again?

Let me know in the comments or on Twitter, and stay tuned for the next piece! We are going to move to a new expansion set, which back in 1994 introduced a whopping four new creature types unique to Magic....