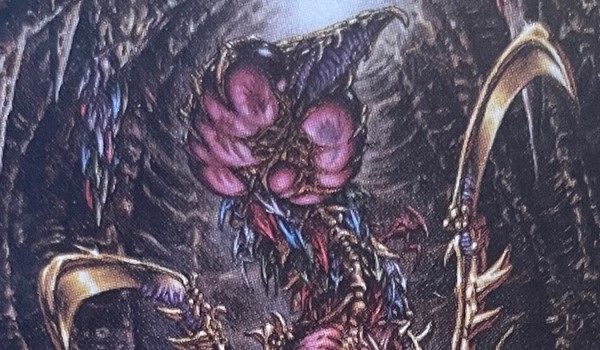 Hello everyone, and welcome back to Magical Creatures. In this series, we analayze every creature type that was created specifically for Magic: The Gathering. Every piece normally comes with an expansion, but last time we made an exception. Indeed, Tempest is kind of a big deal when it comes to new creatures, and thus we only dealt with Thalakos and Soltari.

Three other types were introduced in that set, and we'll cover them in today's article. Get ready for two minor types (Licid and Spike), and very major one: Sliver! We'll start the smaller types, as each one only appears on a dozen cards.

Licid, just like Soltari and Thalakos, is a creature type specific to the Tempest block (or Rath cycle), including Tempest, Stronghold and Exodus. They present as small parasitic beings resembling snails or insects, and are equally present in all five colors. From an in-game perspective, they are quite elaborate, at least when compared to other creatures from those days. 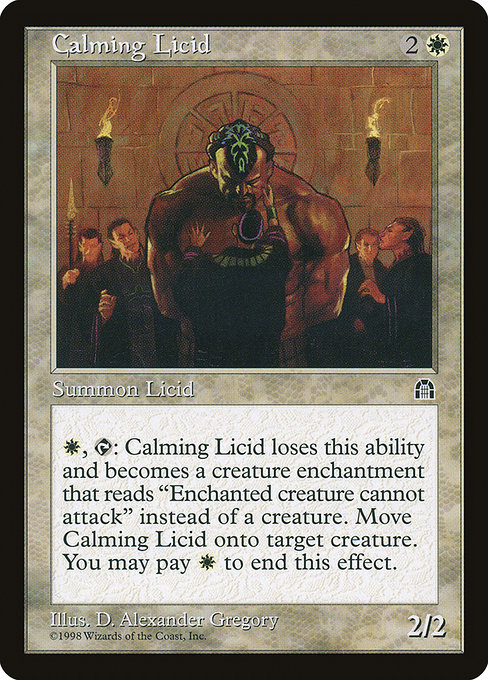 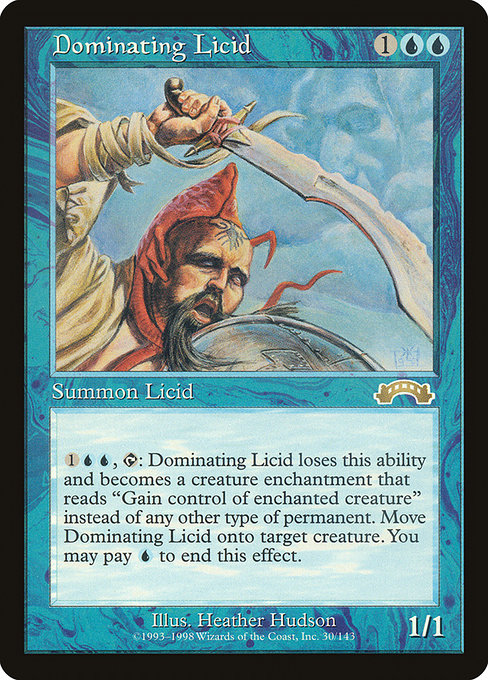 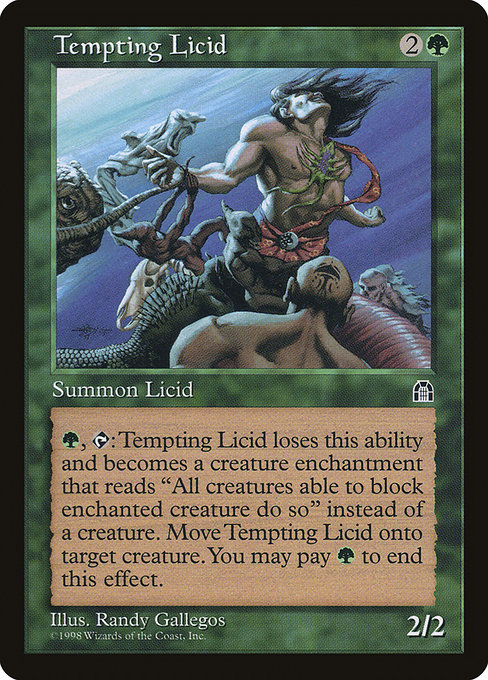 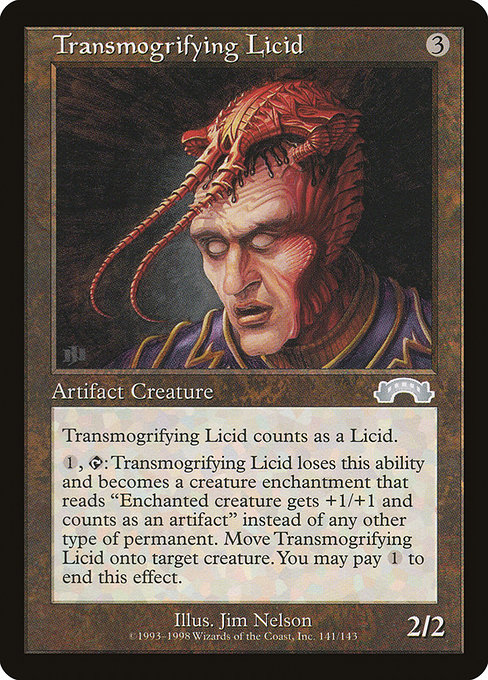 Each Licid is a creature with two abilities. The first is an activated ability, the second static. When you activate the former, that creature stops being a creature and becomes an Aura enchantment with enchant creature. You then attach it to a target creature, and for the cost of one mana, can end this effect at any time. As for the static ability, it simply modifies the characteristics of the enchanted creature.

It's a complex mechanic, and above all, paves the way for even more complex interactions. This is never a good thing, especially if the cards are just not worth it. As such, Licid are considered among the top 10 worst mistakes in Magic development. There are 12 creatures with this type, and none are powerful enough for competitive play, nor funny enough for the kitchen table. So where does that leave Spike?

Spike, too, is almost only present in the Rath cycle, with the only exception being Spike Tiller from (of course) Time Spiral. There are 11 creatures bearing this type, and they are mostly green. Again, only one exception exists, and it's Spike Cannibal.

A spike is another weird being, resembling something between a slug and an insect. All of them (except the black one) are 0/0 creatures which enter the battlefield with a certain number of +1/+1 counters. They also have an activated ability that, for two generic mana and the removal of a +1/+1 counter, puts a counter of the same type on target creature. 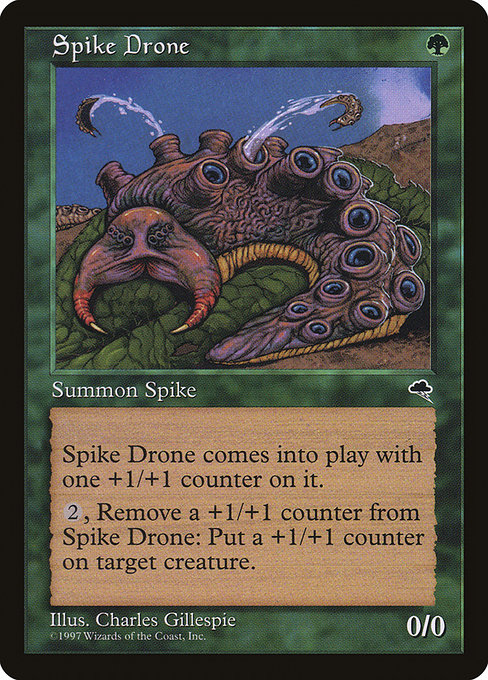 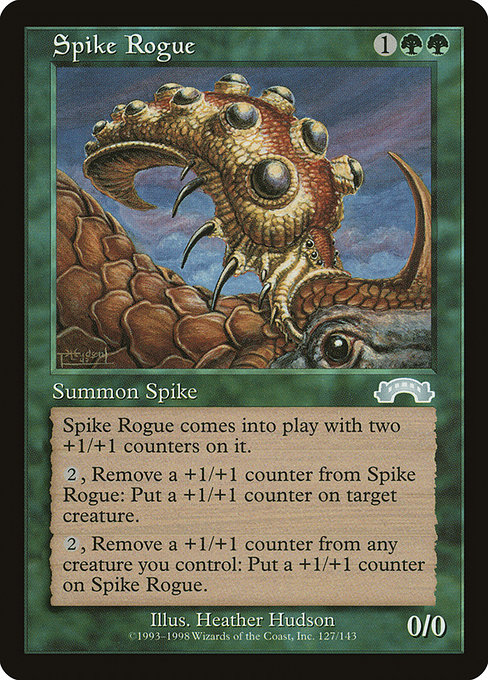 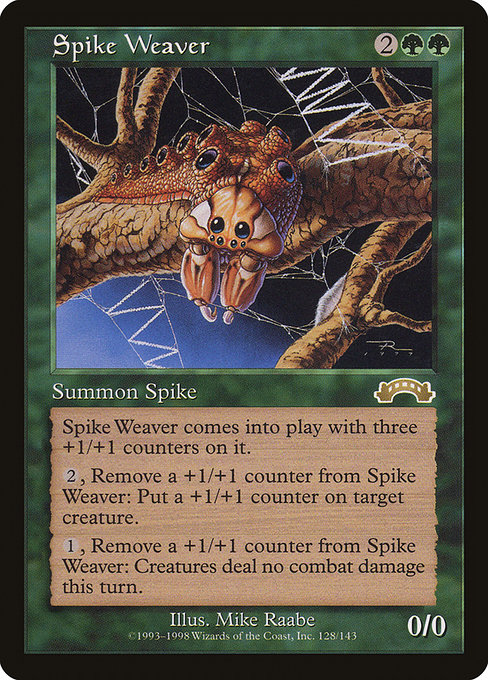 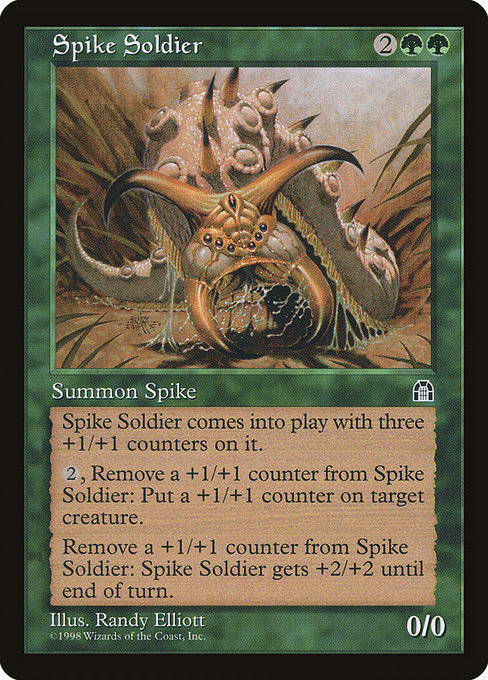 Most of them feature yet another ability to spice things up. Even so, if you ask me, Spikes are another not-that-brilliant invention. We have seen four creature types from Tempest so far: Thalakos, Soltari, Licid, and Spike. And all of them follow the same pattern: they contain the creature type in their very name, they are mostly confined to the Tempest block, and they all have consistent abilities. None strike me as particularly exciting.

The next creature type, however, is something else entirely. At last, it's time to talk about Slivers!

The Origins of Slivers

Sliver could easily be the most representative creature type in Magic, especially if you speak with players from the early days. Appearing for the first time in Tempest, they came back again and again throughout most of Magic's history, with appearances as late as Magic 2015. Not to mention special sets such as Modern Horizons and Time Spiral Remastered.

Most slivers appeared in the Tempest, Onslaught, and Time Spiral blocks. It's not that much, and in fact 109 (however significant a number it is) is still relatively small. For a few good reasons, though, players love Slivers, and that is why everyone has come across the tribe one way or another. But first, what exactly is a sliver? 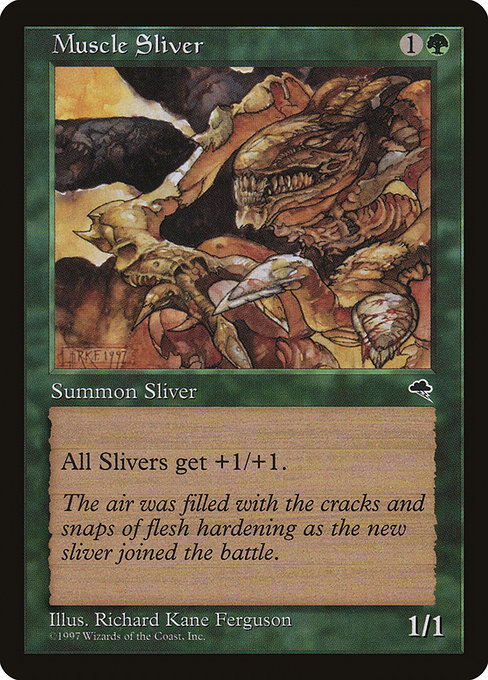 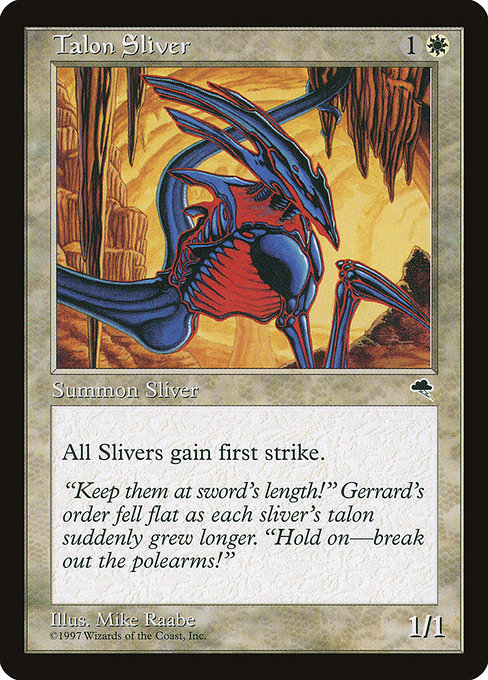 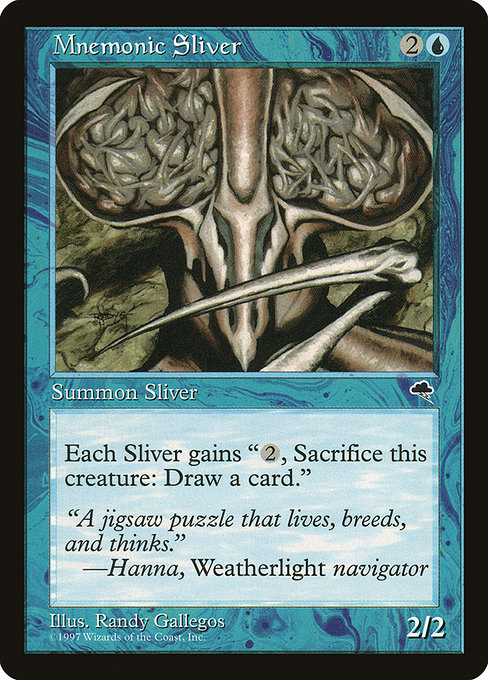 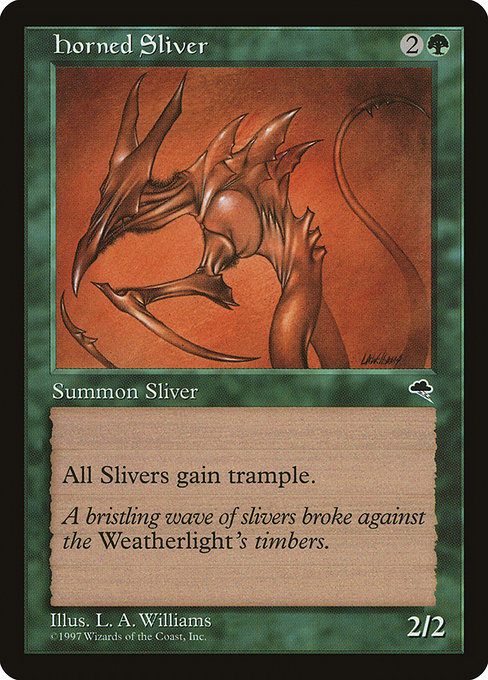 This question used to be easier to answer. The original Slivers, as some may remember, had more distinctive features: an armored body; a bifurcated tail; a funny crested head. When more slivers appeared in later expansions, their form had changed, although some vague resemblance is always easy to spot.

And why are they called slivers? This is easier: all slivers form part of a collective mind, or in other words share a hive mind. The in-game consequence is that most of them are able to share their static abilities with all the other Slivers. As such, they are each but splinters, fragments, or slivers of the greater hive mind.

Slivers After the Rath Cycle

Players must have loved Slivers from the very beginning, since it was the only creature type among the five created for Tempest to come back in other expansions. Thalakos, Soltari, Licid, and Spike were not as lucky. Sliver returned five years later in Legions, the second set from the Onslaught block. Legions contained only creature cards, and no less than 15 were slivers, divided into three cycles. 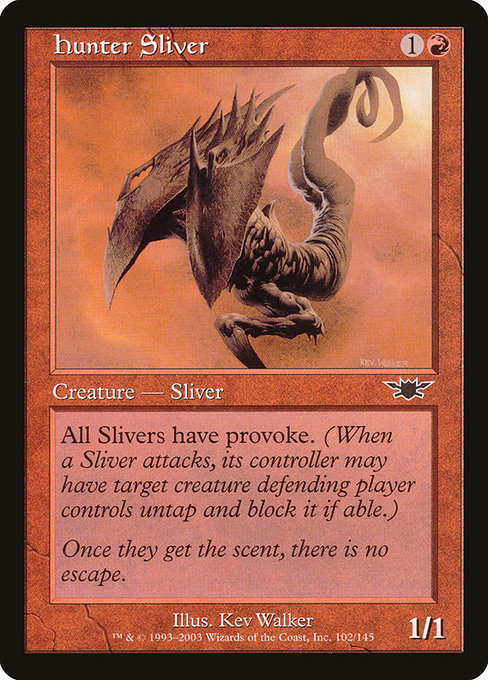 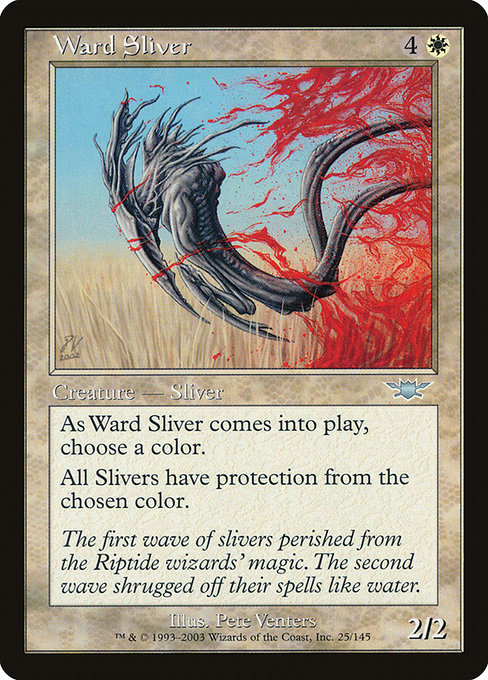 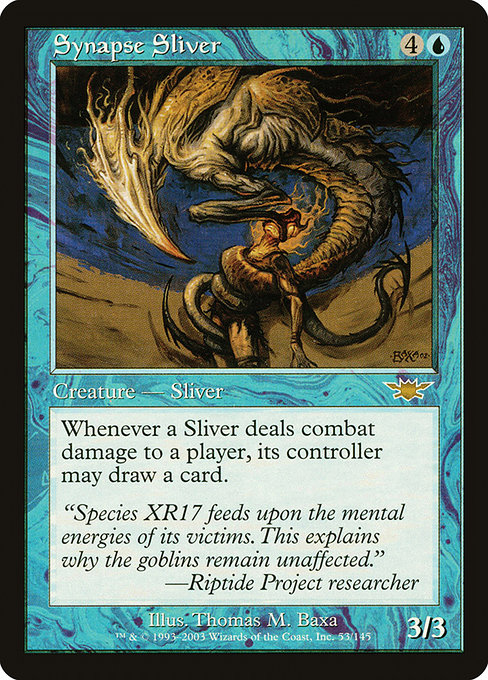 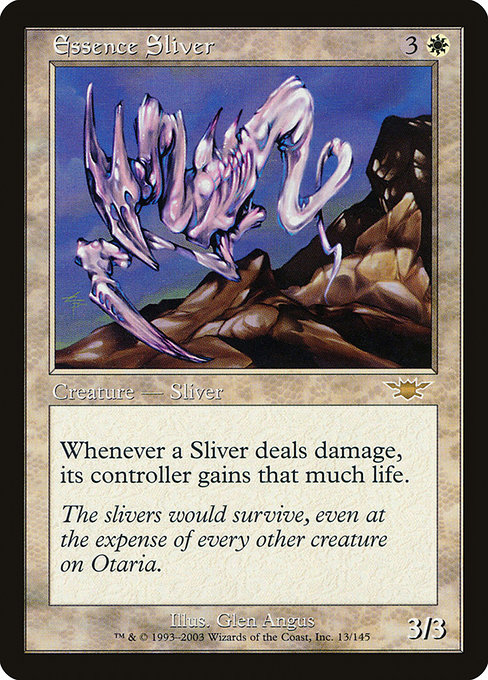 Onslaught was the perfect block for hosting more slivers, since it was all about creature tribes. After all, it was the block that truly launched legendary tribes such as Elf and Goblin. A sixteenth Sliver from this block was printed in Scourge, the block's third and last set. I'm referring to Sliver Overlord, a sort of homage to Sliver Queen, the first lord from Stronghold. They are both 7/7 creatures costing one mana of each color, and each remains very popular among casual players.

Slivers After the Onslaught Block

Three more years had to pass before the third and final wave of Slivers. This time, it happened with the Time Spiral block. Their return was spurred not so much by of a particular tribal focus, but by a look back to the past. Time Spiral was all about time and dimensional travel, yielding another perfect chance to revisit the tribe. 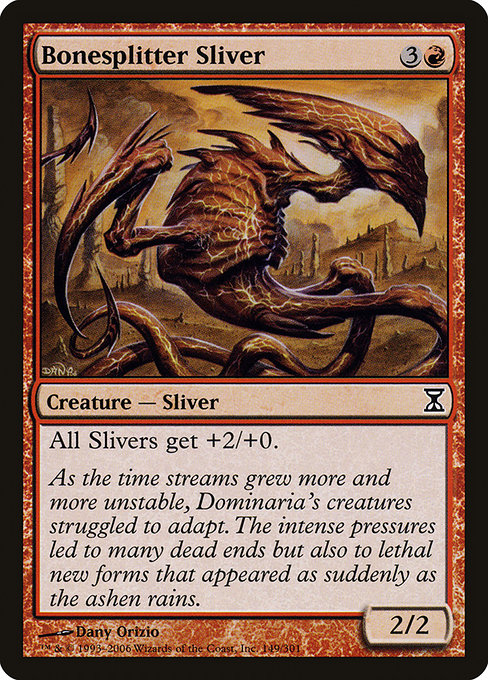 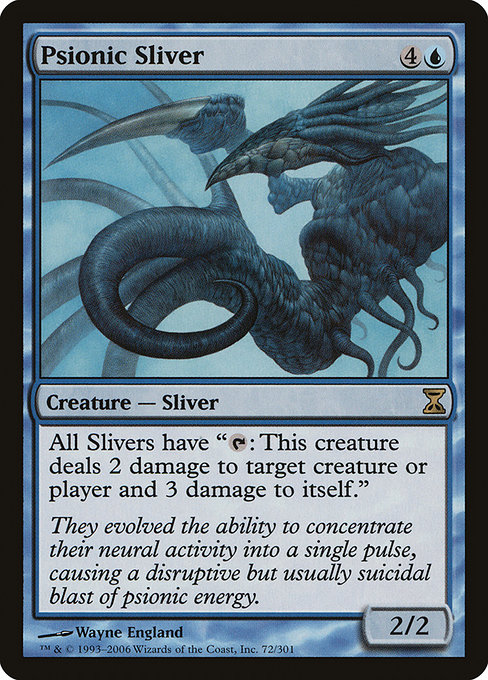 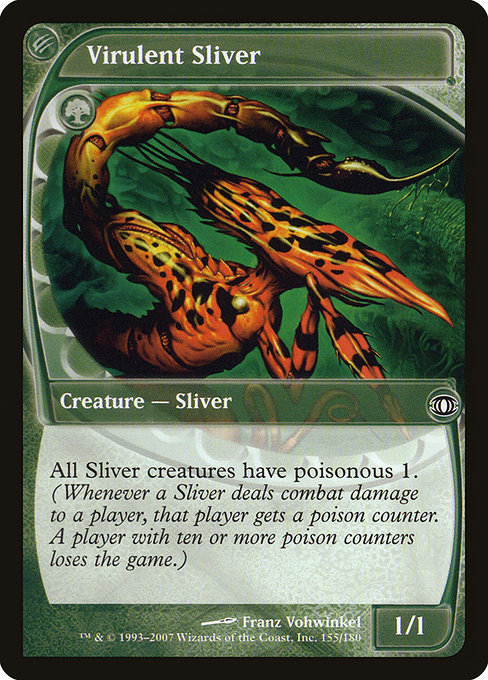 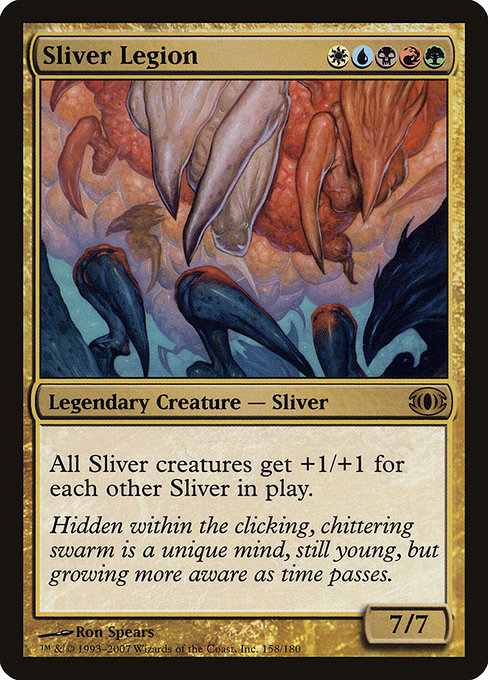 Counting all three expansions (Time Spiral, Planar Chaos and Future Sight), that block brought to us roughly fifty Slivers. Which is half of the total Slivers we have. To sum up, between Tempest and Future Sight, the majority of Slivers existing today were printed. In my humble opinion, this is where Slivers reached their peak. I just love how full of references they are: this block was already packed with quotations from the history of Magic, and Slivers fit in perfectly.

If you look at the gallery above, you can see tributes to Bonesplitter, Psionic Blast, and the two lords (Queen and Overlord). Not to mention Virulent Sliver, a sort of anticipation on the poisonous mechanic that would become much more famous with Scars of Mirrodin.

After Future Sight, most of the Slivers' potential had already been used. Nonetheless, they came back again in some later sets. Over a dozen more arrived in Magic 2014, and another seven in Magic 2015. This included a new sliver costing one mana of each color, and a return to the original art with Sliver Hive.

No new slivers were printed in Dominaria, although many expected them. Some more arrived in Modern Horizons, and others still in Time Spiral Remastered. The period of Slivers, however, had already ended, as these were just reprints. No new Slivers have seen print since.

The Philosophy of Slivers

New players (and older ones, too) love tribal themes. And Slivers are simply the tribe par excellence. You don't even need Coat of Arms in order to have your creatures pump each other and share their abilities.

At the same time, Slivers are an all-or-nothing concept. If you want them to be effective, you need to play a deck based around Slivers. Just a few playsets won't do. And since they are not strong enough for competitive play, it can be difficult to force competitive deck playing Slivers. Even that hasn't stopped some Modern and Legacy grinders from shaking a stick at the tribe, always while packing a full set of Aether Vial and sometimes even achieving tournament finishes.

Do you have any funny story about Slivers? Have you ever tried building a deck with this incredible tribe? Let me know in the comments or on Twitter, and stay tuned for the next instalment. We are finally going to leave behind the Tempest block, and move forward to the Urza block!