In recent months, Pioneer has gotten especially popular among the competitive Magic crowd. It's the inaugural format for the first Regional Championship and many of the Regional Championship Qualifiers feeding the event. Thanks to the influx of Pioneer tournaments and additional eyes on the format, more players have begun to iterate on the established top decks with some interesting results. The most notable innovations seem to all relate to MonoG Devotion, the current top dog of the metagame.

At face value, MonoG Devotion is a ramp deck that takes advantage of Elvish Mystic and Llanowar Elves alongside Nykthos, Shrine to Nyx to power out midrange threats like Cavalier of Thorns and Karn, the Great Creator. However, the deck also includes Oath of Nissa and Storm the Festival as forms of card advantage and selection. Thanks to Oath's mana-washing and Festival putting permanents directly into play, there is enough consistency to reliably splash otherwise uncastable planeswalkers.

Initial builds played a single copy of Nicol Bolas, Dragon-God as a standalone value engine. Bolas is an enticing include as it provides a consistent source of card draw and removal, things green decks often struggle with. Hall of Fame member and professional mathematician Frank Karsten recently released an article on the likelihood of getting a Bolas in play and found it to have an 82.5% success rate by turn six, with no substantial difference in success rate between one or two copies.

Karsten's findings suggest that it's perfectly reasonable to play off-color planeswalkers, and may arguably be correct for the sheer increase in power level. Recently, the deck has moved away from Bolas in favor of Teferi, Who Slows the Sunset as it provides consistency toward combo wins.

As mentioned above, the midrange plan is just surface level. MonoG also has access to an impressive combo finish involving The Chain Veil and Pestilent Cauldron // Restorative Burst out of the Karn, the Great Creator wishboard. 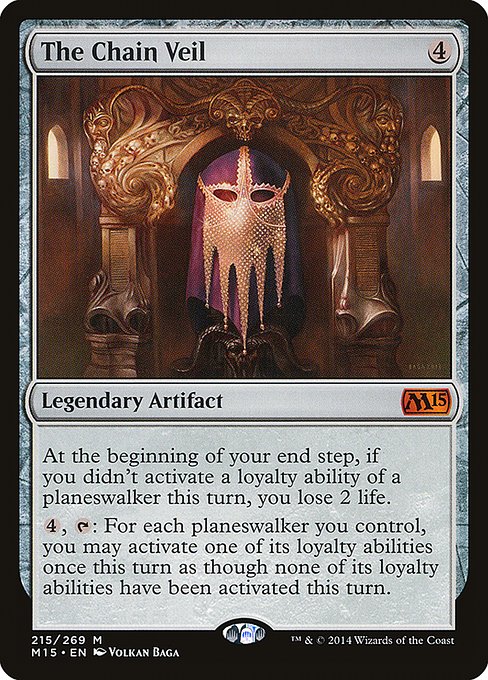 With sufficient devotion, a player can use Teferi or Kiora, Behemoth Beckoner to repeatedly untap The Chain Veil and/or Nykthos. Restorative Burst can pick up Kioras and Karns in the graveyard that have minused to zero loyalty. Each fresh copy can activate an additional time for each activation of the Chain Veil, even if they weren't in play when the artifact was activated. Since Restorative Burst exiles itself and is an artifact on the front side, Karn can repeatedly find the spell from exile to recast.

After performing this loop a sufficient number of times, Karn can then find Reckoner Bankbuster in the sideboard, activate it, then activate Kiora or Teferi to untap the vehicle until its charge counters deplete. This produces a treasure token that can be used to cast Pestilence Cauldron and mill the opponent infinitely.

MonoG feels like a Swiss Army Knife. It utilizes one of the key pillars of the format (Nykthos/one-drop mana dorks) better than any other deck allowing it to fight on just about any axis. Threats like Old Growth Troll can provide an aggro game plan to take down opponents before they set up, while Karn can adjust to any matchup with a variety of hate cards. Having maindeck access to niche options like God-Pharaoh's Statue or even Pithing Needle can deal a critical blow to linear strategies, and "good stuff" options like Skysovereign, Consul Flagship and Esika's Chariot can overpower anyone playing fair Magic.

I'm also a big fan of how consistent the deck is. Each effect has multiple cards performing similar roles. Nine mana dorks and functionally eight land auras, plus Nykthos, almost guarantees acceleration in the early game, while ensuring Kiora will untap a land that produces multiple mana. Oath, Storm the Festival, and Karn all provide consistency in assembling the end game lines as well. Cavalier is either a game-winning threat on its own, or fixes the next draw when it dies for a follow up win condition.

Since you are a green deck with only nominal access to other colors, it's hard to make significant deckbuilding changes without affecting the deck's ability to reliably cast its necessarily pip-intensive spells.

The deck's natural predator is white aggro. Decks like WR Heroic, and White Weenie are especially difficult where their clock is fast, disruptive, and can get underneath us. Brave the Elements is a catch-all way for them to completely sidestep MonoG's defenses, so blocks aren't always reliable ways to guarantee another turn.

The list below incorporating Portable Hole on the back of shocklands and pathways may be the closest MonoG can get to early interaction and removal.

All in all, MonoG Devotion is a powerhouse of a deck, and probably the best all-around choice for Pioneer right now. I plan on locking in the list above for a local RCQ this weekend, and I plan to share updates on Twitter. Follow me there for all the latest updates! See you all next week (and hopefully with my invite in hand)!