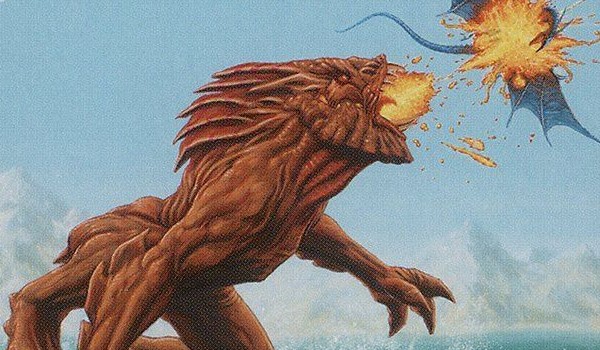 Hello everyone, and welcome back to Magical Creatures. For the past couple of months, every week I've been analyzing some creature types that were invented specifically for Magic. We started with Atog from Antiquities, and recently discussed Spellshaper from the Masques block (one of the most interesting types, if you ask me).

Last article focused on the interesting fact that Spellshaper and Monger are classes and not races. Today, we are going to discuss three new creature types: Kavu, Volver and Cephalid. But first, as usual, let's take a look at the passing of blocks and expansions, and see what happened during those months.

Mercadian Masques was the first set of the Masques block, in 1999, which was completed the following year with the arrival of Nemesis and Prophecy. In 2000, two special sets were created: Starter 2000 and Beatdown. Needless to say neither of them contained any new creature types. More importantly, in October it was time for Invasion, opening a new block.

The Invasion block, composed of Invasion, Planeshift and Apocalypse, was released between 2000 and 2001, and was centered on multicolored cards. Two of the subtypes we'll see today come from this block, while the last one comes from the forthcoming Odyssey block. Let's start with the first two, though, and see what they brought to the game.

We don't know much about kavus, but then again, isn't this the case with most creatures from this series? After all, they are weird, living beings; creatures that don't come directly from the fantasy world, but rather from the R&D of Magic: The Gathering. That being said, we know kavus are reptiles, and we know they are carnivorous. No less than 46 Kavu creatures exist! Surprised? They all come from just three blocks: Invasion, Time Spiral, and Dominaria (excluding Territorial Kavu from Modern Horizons 2).

Kavus of all shapes and sizes 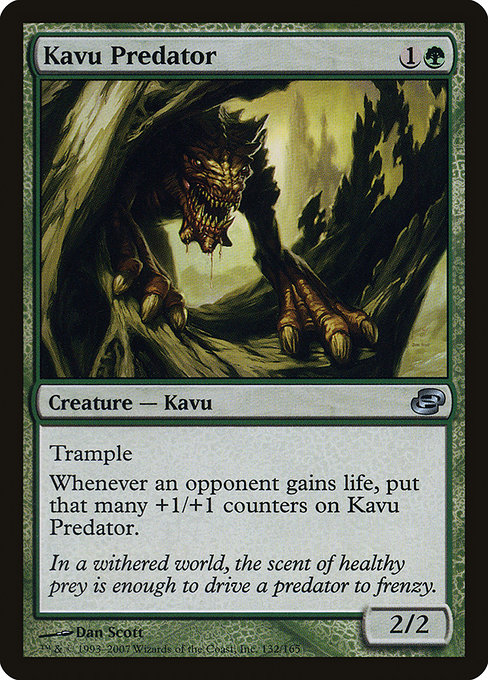 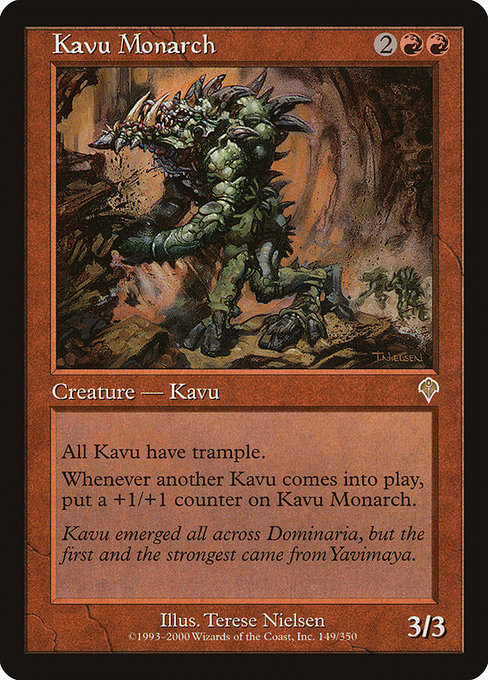 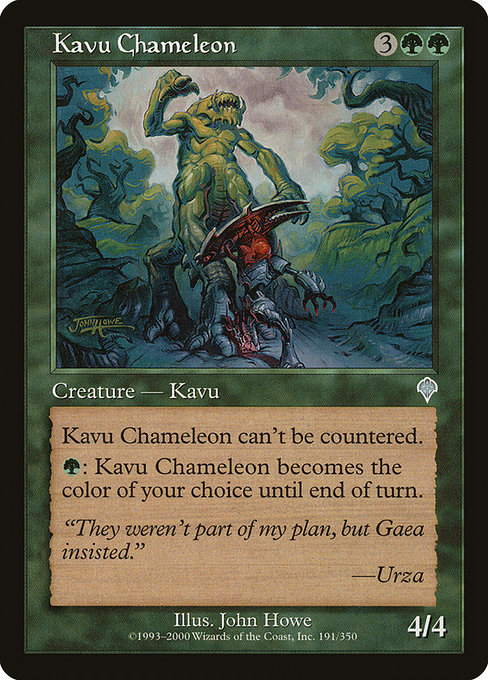 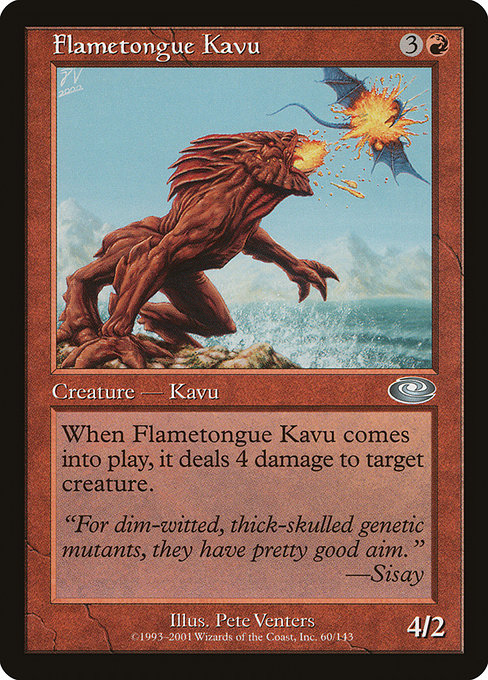 Apart from that, they come in all sizes and shapes. They can be small as dogs or big as elephants, and possess four to six legs. According to the novel Invasion, the term "kavu" means "carved from stone," or "ever watchful." Not that this helps much in understanding their nature, but we should still cherish such rare and specific information.

They're an ancient species, that's for sure, and it's normal to confuse them with a similar creature type in Dinosaur. The latter is clearly not a good fit for our series, but it's still an interesting tribe, and we might get back to them in the future. They, too, have a unique story: the Dinosaur subtype was created at the time of Ice Age, dropped with the Grand Creature Type Update, and brought back with Ixalan. Maybe we'll delve deeper into that another time!

As for their competitiveness, the only Kavu I could name is Flametongue Kavu. It would never be played today, but in its prime, it had a more-than-decent enters-the-battlefield ability. Removal on a body proved good enough even for decks like Red-Splash Psychatog.

What about Volver? Can you name any creature with this subtype? I personally wouldn't find it easy, in part because only five of them exist. All from Apocalypse, the second set in the Invasion block. And since there are five, of course they form a cycle. It's a curious cycle, I must admit that, if not a very powerful one.

The curious cycle of Volver 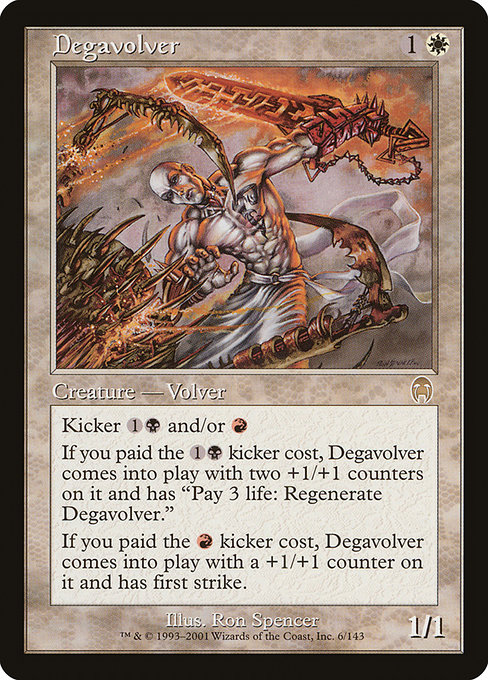 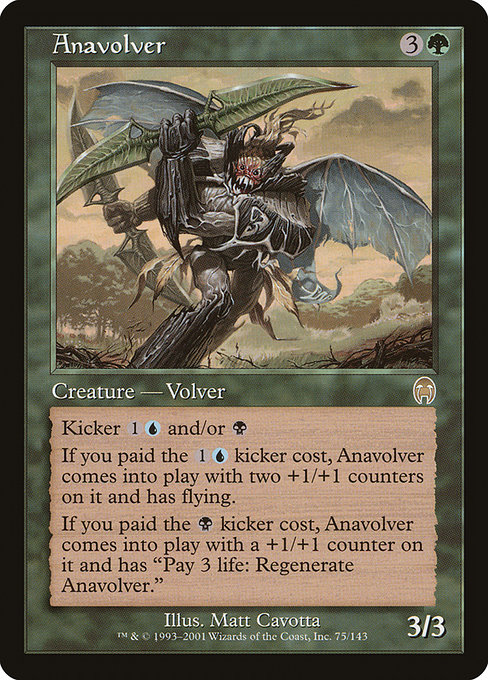 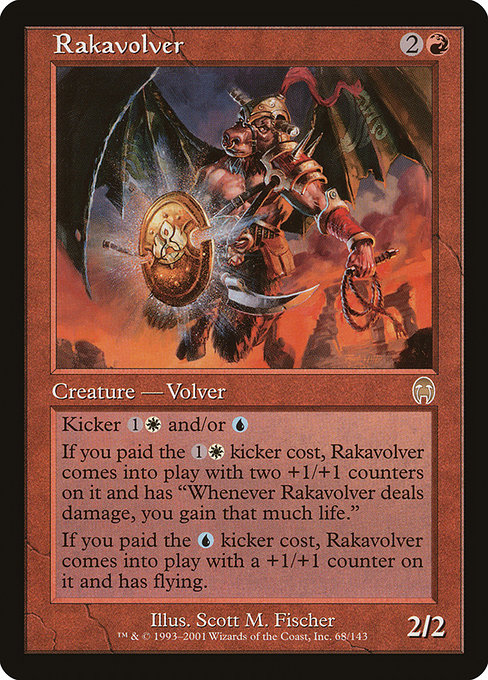 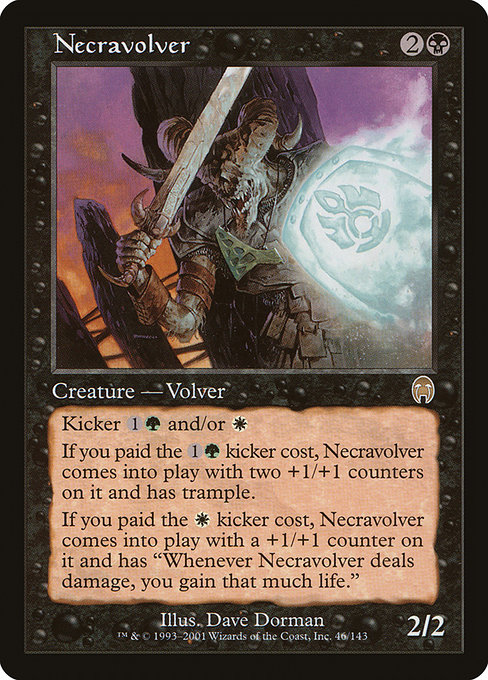 This cycle of rares is meant to show the weird alliances that became necessary during the Phyrexian Invasion of Dominaria. Nowadays it doesn't seem much, but at that time it was strange to see creatures combining three colors (two allied and one opposite).

Wizards managed to mix these colors via the kicker mechanic. Each creature had two separate kicker costs, or one for each of its enemy colors. You could decide to pay one, both, or none of the kicker costs, and each of them grants the creature +1/+1 counters and abilities typical for that color.

It doesn't surprise us that they didn't see play. This kind of experiment only rarely produces great creatures, and Volver is no exception. Here's why we haven't seen any more Volver, and why we'll most probably never see them again.

The Arrival of Odyssey

We're already done with the Invasion block, and even the Odyssey block won't keep us busy that long. In fact, only one new creature arrived that is interesting for our purposes... Cephalid! It's probably the most renowned creature type from today's piece, mostly thanks to tournament history. But first, let's start from the origins. Have you ever wondered what need was there for Cephalid, when we already had Merfolk? Mark Rosewater (who else?) explains it in this funny article from 2002. In short, "the point" of Odyssey was to specifically not print any Merfolk.

So, what are cephalids, apart from non-merfolk people? Designed for the Odyssey block, they are anthropomorphic creatures similar to the octopus, with tentacles and a flexible body. They are mostly aligned with blue, which is obvious if you take a look at any of them. There are few creatures that close to the blue's color philosophy. Most Cephalids manipulate either the library or the hand, and others interfere with non-flying creatures. 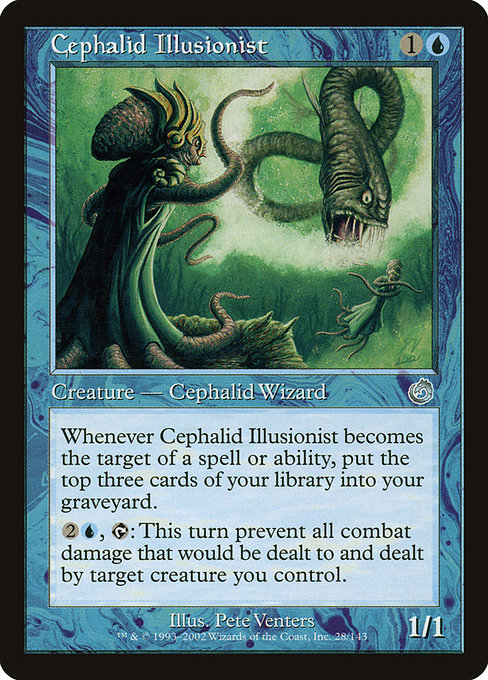 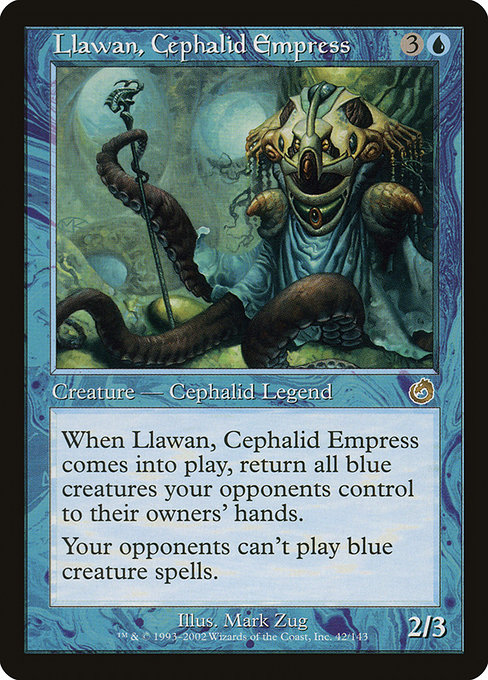 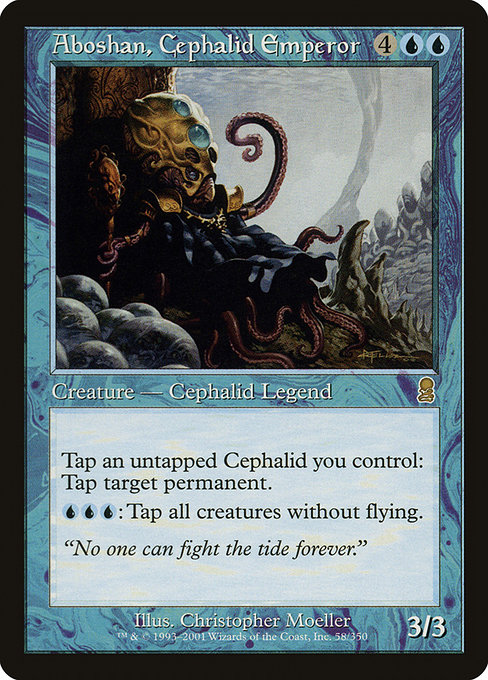 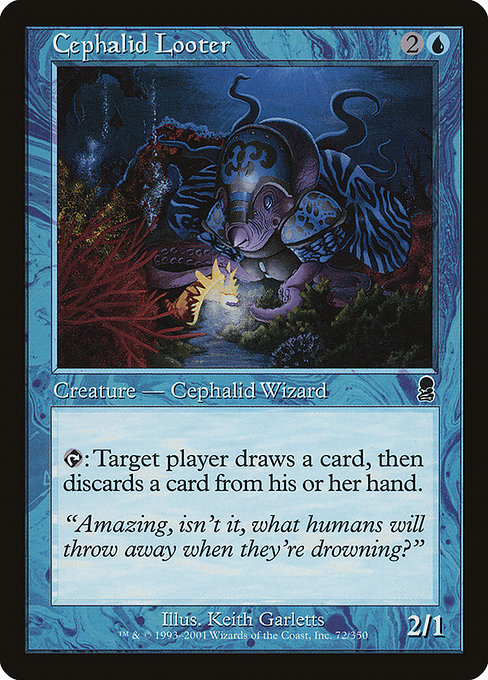 They are also among the creature types that have been set aside for the longest time before returning. Before the arrival of Streets of New Capenna, in fact, no one saw a new Cephalid for 19 years! Since we are mentioning New Capenna, though, it's worth noting that it contained some black Cephalids as well. Naturally, they are affiliated with the Obscura.

And what about competitive play? I told you this was the only subtype from today's article with some creatures showing up in tournaments. The first we need to mention is Cephalid Illusionist, one of the central pieces of a strong combo deck, back in the days of Extended. I'll add this Cephalid was so central that the name of the deck was Cephalid Breakfast. Shuhei Nakamura famously played it in 2005 at Grand Prix Seattle.

The other one worth mentioning is Llawan, Cephalid Empress, a typical sideboard card used to gain an edge in blue mirrors. Consider how powerful this card is against blue decks. And how important it is to get her into play before the opponent manages to!

We're getting really close to one of the most important shifts in Magic history: the layout change occurring with Eighth Edition and Mirrodin. In fact, although there's still a full block to pass first, Onslaught and its two expansion had no new creatures unique to Magic. So next time we'll pass right to the first set with the new layout and unveil its many new creatures.

For now, how do you like these three? Have you ever played any Cephalid? I'm not going to ask about Kavu or Volver, but feel free to post your experiences in the comments or on Twitter, and stay tuned for next week!