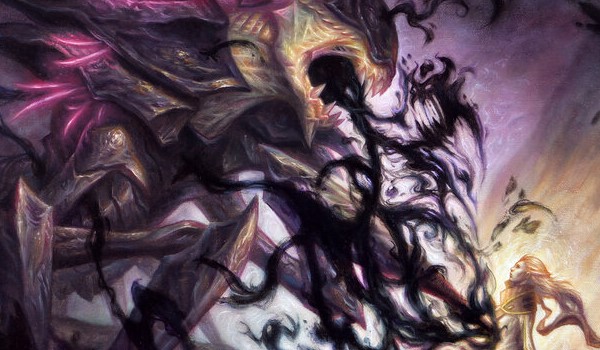 Hello creature enthusiasts, and welcome back to Magical Creatures! In this series, we discuss every creature type in Magic that was created specifically for this game. It all began a few months ago with the criteria to follow when assessing creature uniqueness. From there, we tackled such creatures in small groups, sequencing them according to their set of first appearance whenever possible. In the last piece, we saw Rigger, Surrakar, and the notorious Eldrazi.

As I brought up at the end of that installment, over the past 20 years, there has been a steep decline in the creation of creature types unique to Magic. Indeed, today we'll have to move forward 6 years in order to find the next new creature! All those years between Rise of Eldrazi and Kaladesh produced none, so let's begin with an overview of this beautiful expansion.

Released on September 2016, Kaladesh is set on the plane of the same name: a plane whose atmosphere is saturated with aether. Packed with automatons and artifacts created as much for their beauty as for their usefulness, Kaladesh resonates with steampunk vibes. It's a world of inventors, and the birthplace of Chandra.

As for new additions, it was in this block that a new artifact subtype emerged: Vehicle, along with its keyword ability crew. What about new creatures? Kaladesh introduced a few, such as Pilot and Servo, but the only new subtype unique to Magic is Aetherborn. It represents humanoid, black-aligned creatures born of Aether. As such, Aetherborn is a race, and comes in several classes: Rogue, Artificer and Warrior. 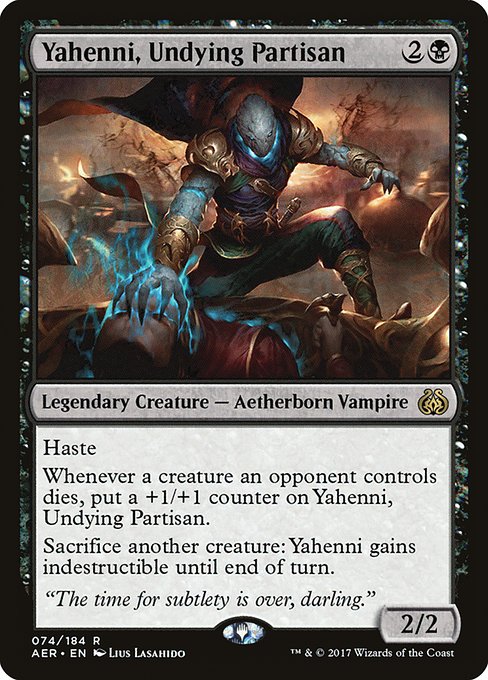 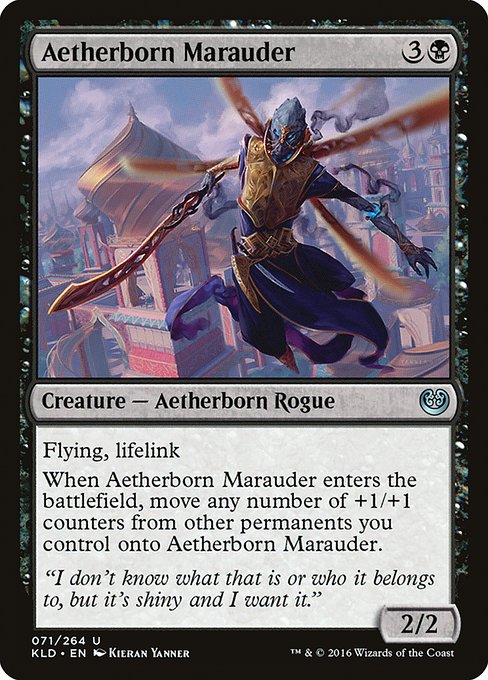 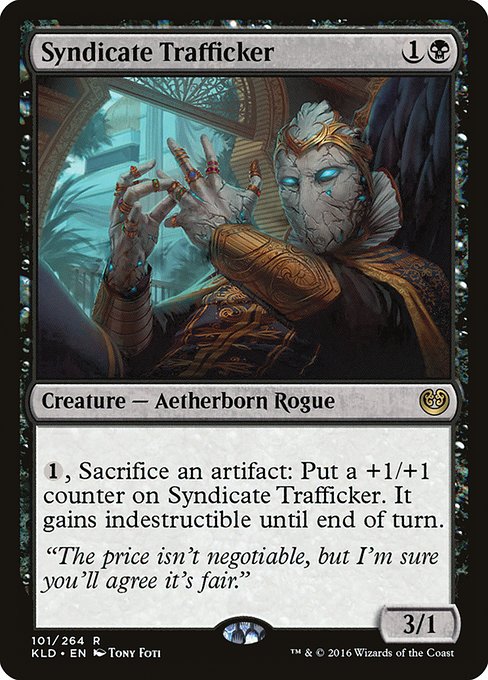 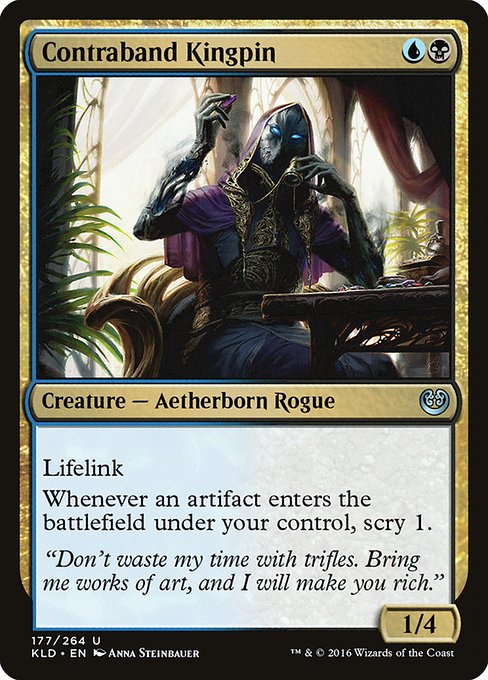 All Aetherborn in this game (there are 16 in total) are black, with only one being both black and blue. They typically care about +1/+1 counters, as over half of them share a related ability. Another thing they have in common is mentioning artifacts, which is not unexpected in a block full of them.

Despite their having a lord (Midnight Entourage), 16 creatures is not many to choose from when it comes to building a competitive tribal deck. Nonetheless, if you ask me they are an interesting tribe, at least from the design perspective. They were short-lived beings, and therefore had a "free spirit and hedonistic lifestyle." Not a common trait among Magic creatures!

Flashforward a couple of years to the next creature type unique to Magic: Azra, introduced in the summer of 2018 with Battlebond. This weird set was the first in the history of this game to appear specifically as a Two-Headed Giant-focused booster set. It was designed to be drafted, and its cards were never allowed in Standard or Modern tournaments. 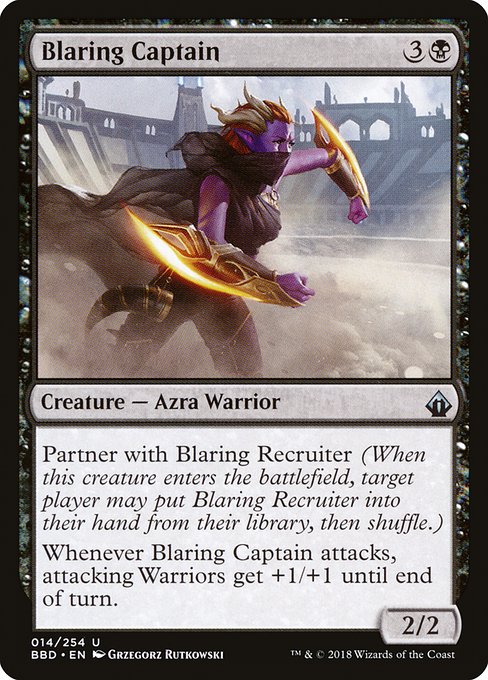 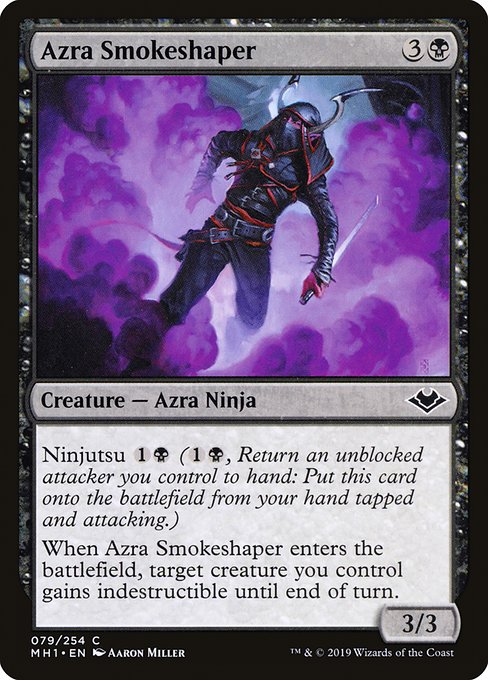 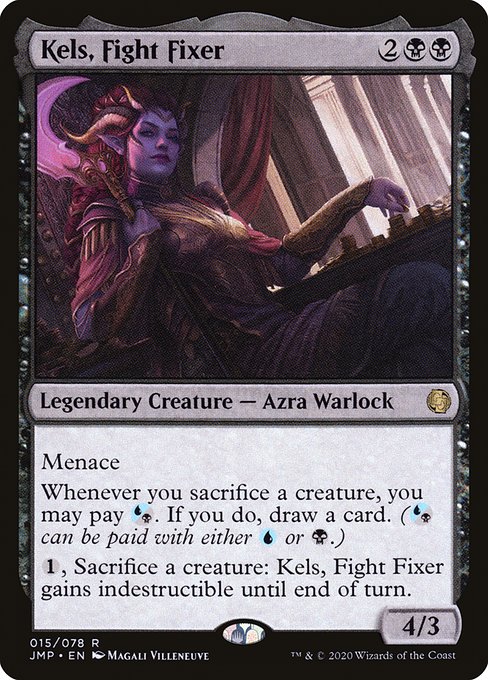 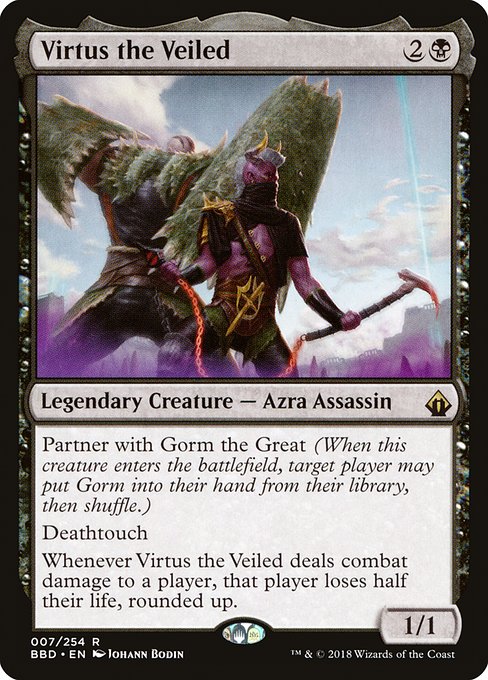 So, what does Azra mean? That's hard to say, but at least we can see from their illustrations that they are human-like beings with some demonic traits. I mean, they have horns and their skin ranges from purple to grey, but apart from that they look human enough. Azras may be based on asuras, a sort of demon analogue from the Hindu religion that's sometimes depicted as having bluish-grey skin. Their typical class is Warrior, but we also have an Assassin, a Warlock, an Employee and even a Ninja (the latter from Modern Horizons)!

As far as I'm concerned, the most interesting cards with this subtype are Kels, Fight Fixer and Virtus the Veiled, at least for their vaguely useful effects. However, their play remains limited to Commander.

Strixhaven and Its Tokens

Three more years passed without new creature types unique to Magic. The next set to host such creatures was Strixhaven: School of Mages. Released in April 2021, this set was based on instants and sorceries, which Mark Rosewater defined as a "very mechanical bottoms-up construction." Strixhaven introduced the Lesson spell type, as well as two subtypes unique to Magic: Fractal and Inkling. They are both mostly limited to tokens, a phenomenon increasingly common, as we saw in the past few installments.

Fractal is a weird creature type, and technically I'm unsure whether we should consider it a subtype unique to the Magic franchise. The fact is, fractal is a concept borrowed from mathematics: it's a curve or geometrical figure, each part of which has the same statistical character as the whole. Or, if you want to hear it in the words of Kianne, Quandrix Dean, "Fractals are just pseudo-dimensional manifestations of asynchronous biosymmetries. It’s really quite simple." 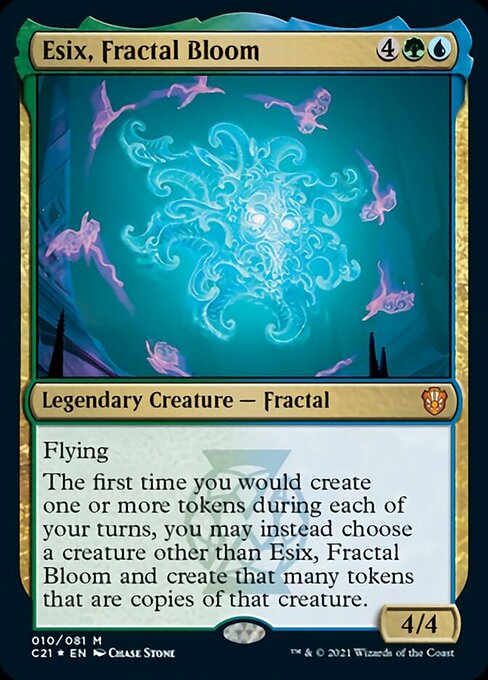 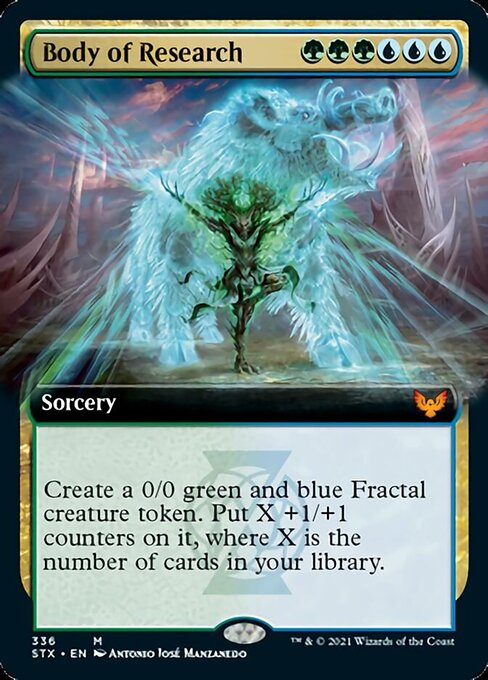 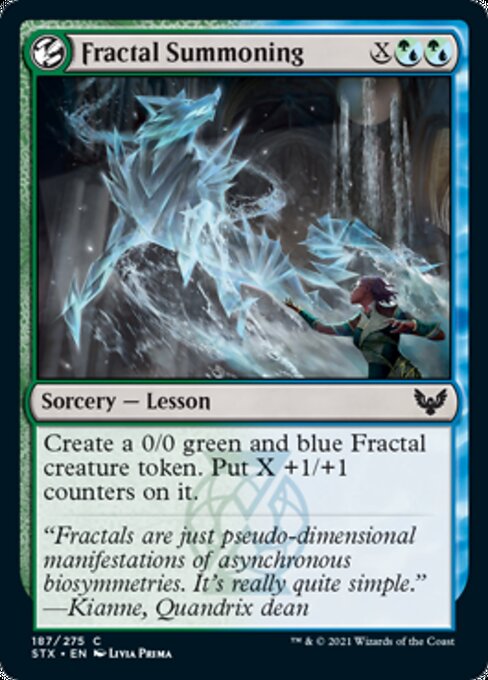 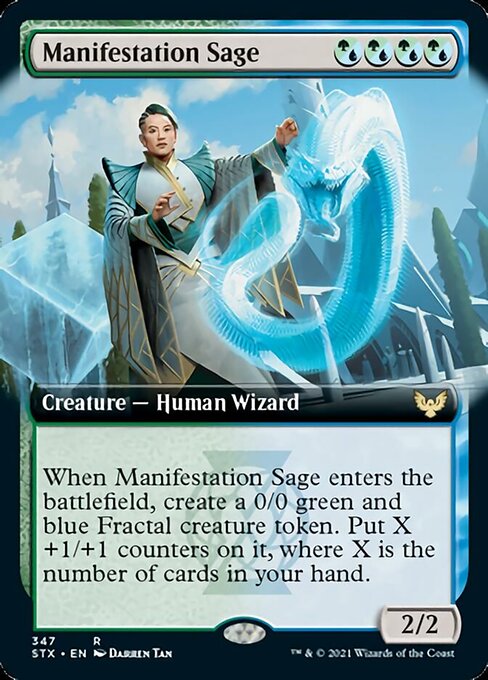 Therefore, their concept is not completely novel (as opposite to Myr, or Lhurgoyf, for instance). However, no other game or work of fiction that I'm aware of has ever repurposed this concept as a creature, which means it deserves at least a mention in the present series. The only card ever printed with this subtype is the legendary Esix, Fractal Bloom. That being said, 13 more cards are able to produce tokens with that subtype, so it's not as uncommon as it might seem. Fractals are 0/0 green and blue creature tokens, and thus they can only survive by holding +1/+1 counters or through less conventional means.

Inkling is similar to Fractal, since both subtypes are mostly apeparing on tokens. They are funny beings made of ink magic, created by the students of the Silverquill College of Strixhaven. As such, they are small, black, and liquid, and only come in black and/or white. These tokens are 2/1 and have flying, which makes them a bit more interesting (and dangerous) then your average 1/1 vanilla token (as seen on Saproling, Pentavite, etc.). In my opinion, Inklings are funny little characters, and in fact do show up in some stories set at the Strixhaven school. If that's your thing too, do take a look at some of them! 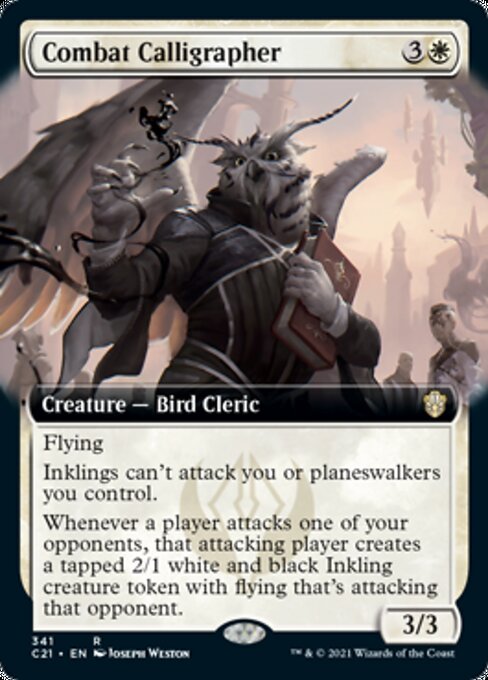 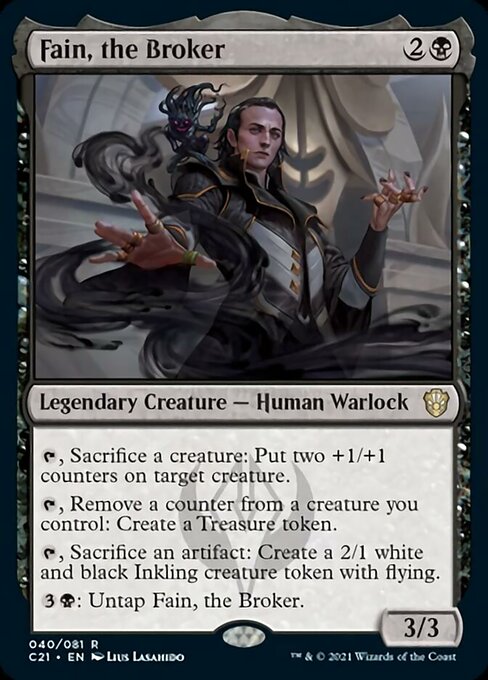 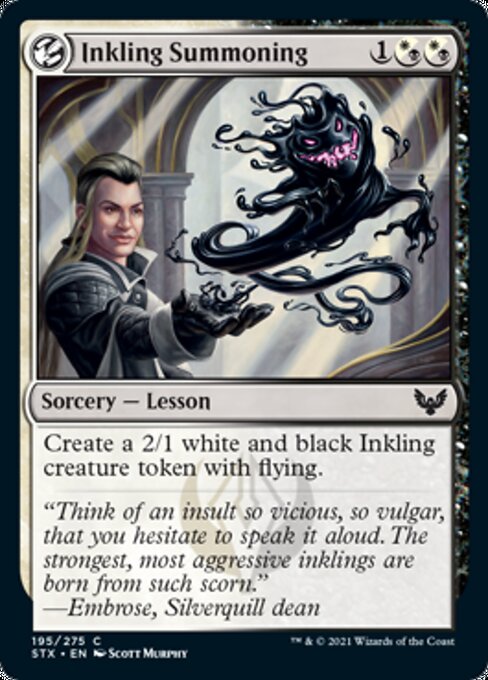 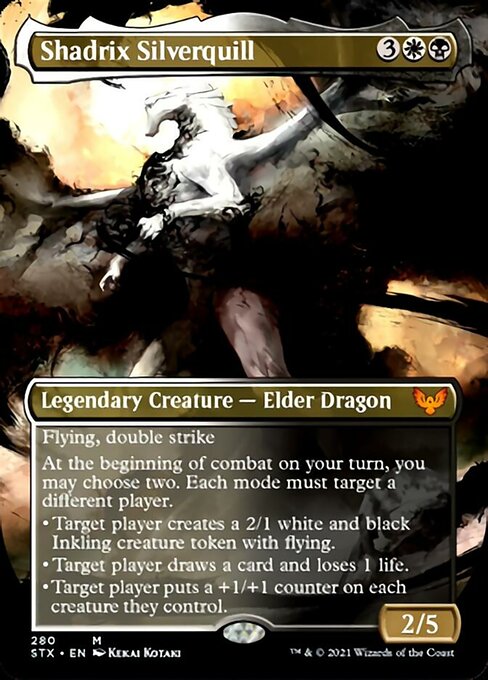 A Shorter History and More Tokens

Today, we analyzed four creature types unique to Magic. That's a higher number than usual, but none of them were particularly notable or successful (unlike, say, last week's Eldrazi). That's probably due to two reasons.

For one, we are getting closer and closer to the end of this series, meaning these last subtypes to be discussed are quite recent in Magic and appear on few cards. Additionally, two out of four are only (Inkling) or mostly (Fractal) available as tokens, never a great sign for any creature type. Saprolings proved the sole exception to this rule.

Anyway, we only have one subtype left. Do you know what it is? Let me know in the comments or on Twitter, and stay tuned for the final chapter of Magical Creatures!