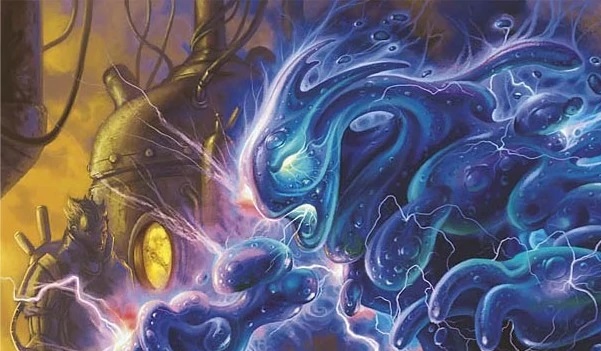 Hello, creature enthusiasts! Welcome back to our series on each and every magical being created specifically for this game: Magical Creatures. We started this journey a few months ago, establishing the criteria to follow when picking the right creatures to discuss. In the last three installments, we moved to the second era of Magic, that of cards with the "modern" frame from Eighth Edition.

As you may have noticed, new entries in the creature canon became less and less frequent after 2004, the only exception being the Mirrodin block, which was packed with them. And yet, ever since the Kamigawa block, the number of new creatures unique to the Magic franchise dropped off dramatically. Last week, we saw the only two from the Kamigawa block. Today, we are going to cover two different blocks, each only featuring one new creature.

These two blocks are Ravnica and Time Spiral, and they respectively introduced the types Weird and Camarid. So, without further ado, let's begin with the former.

Released between 2005 and 2006, this was the first block set on Ravnica, a plane mostly made of an enormous city. We came back to that plane time and again over the course of the years, both with Return to Ravnica and in a few standalone expansions. It centered around multi-color spells, the first block to do so since Invasion. More importantly, it introduced the "guild model" which would become so common in later years, with color combinations earning common names based on their association with a group of creatures in the lore. Its ten guilds, one for each color pair, were introduced over three expansions: Ravnica: City of Guilds, Guildpact, and Dissension.

And what about creatures? The large expansion introduced Archon and Lammasu, but unfortunately, neither is unique to Magic. The first one is self-explanatory, and the second comes from a Mesopotamian beast. Guildpact introduced Nephilim and Weird. This time, while Nephilim comes straight from the Bible and means something like "giant," Weird might be considered brand-new.

Let's be honest, a Weird is not that different from an Elemental. And then again, this is not the first time that we find subspecies: only last week we was talking about Zubera being a kind of Spirit! Weirds were designed as Izzet pets, which explains why they only come in blue and red. Ten such creatures exist, and their most interesting trait is that they are evenly distributed among the various expansions. The original Ravnica block introduced three of them: Gelectrode, Petrahydrox, and Steamcore Weird. Then Return to Ravnica block added five more, and the last ones appeared in War of the Spark and Core Set 2021. 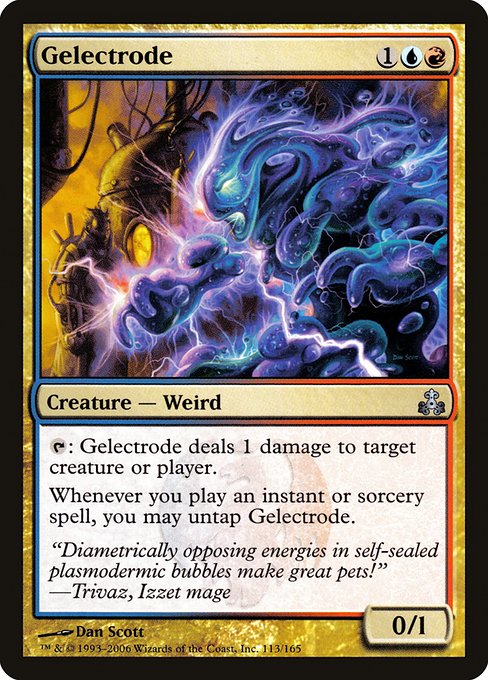 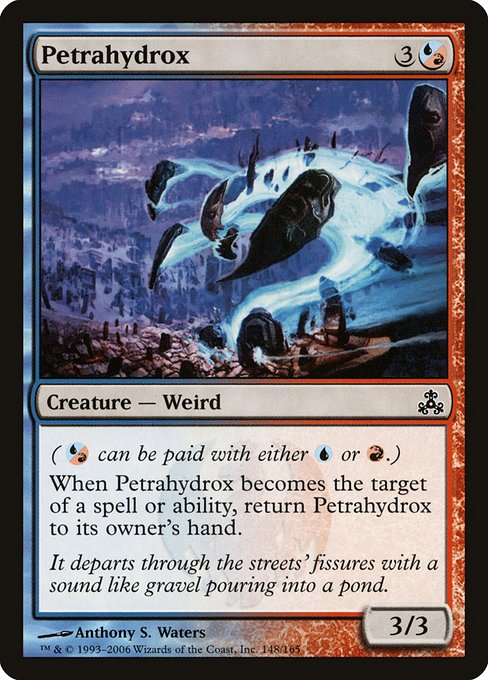 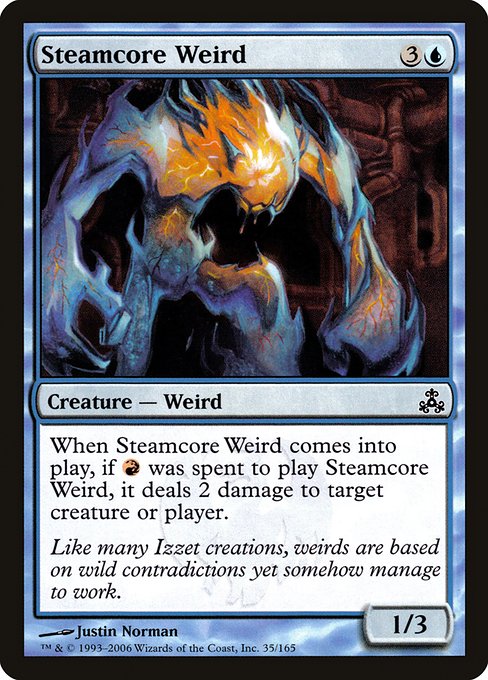 What's a Weird, apart from being weird? Mark Rosewater once declared that the reason behind Weirds is that "world building made some weird creatures and didn’t know what to call them." So, it looks like "Weird" was just a nickame they used when designing Ravnica, and eventually decided to keep!

A Weird is an elemental used as lab assistant by Izzet League members. Their primary feature is bearing synergy with instant and sorcery spells, which makes sense since they are Izzet pets. Five out of the ten Weirds mention instants and sorceries, or at least "noncreature spells." None of them was ever particularly sought after for competitive play, at least not in constructed. As for limited, Gelectrode was a great pick, as all pingers are, and it surely made many new players come up with Izzet lists, together with Wee Dragonauts.

Time to move again, since Dissension only introduced Construct, and I can't in goodwill consider it a creature unique to Magic. What's next?

Coldsnap didn't bring any new creature types, so we'll move straight into the next block, which started with Time Spiral in October 2006. The following year, Planar Chaos and Future Sight would come to close the block, each expansion dealing in some way or another with time.

The Time Spiral block could easily be the deepest and most complex block ever created in Magic, as well as the one with the highest number of references and citations. It would might a series of its own, but for the moment we shall remain focused on creatures.

Some new creatures were printed within this block, yes, but mostly they weren't unique to Magic. I'm thinking of Assembly-Worker and Hellion, for instance. A couple of them were, though: Triskelavite and Camarid.

We have already seen Triskelavite twice in the course of this series, so we won't spend too much time on it. The first time was in relation to Tetravite. And the last time was when regarding Pentavite. The fact is these three creature types are quite similar in that they only appear on tokens. We could consider all of them subspecies of the (non-existent) type "avite:" Tetravite, Pentavite and Triskelavite are all creations of an "avus" Construct. By the way, Construct is a creature type; it appears on non-token cards and is actually pretty common, with no less than 177 cards! 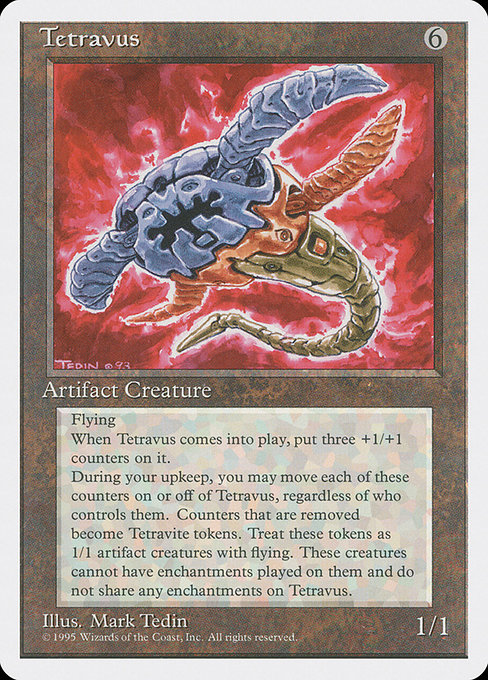 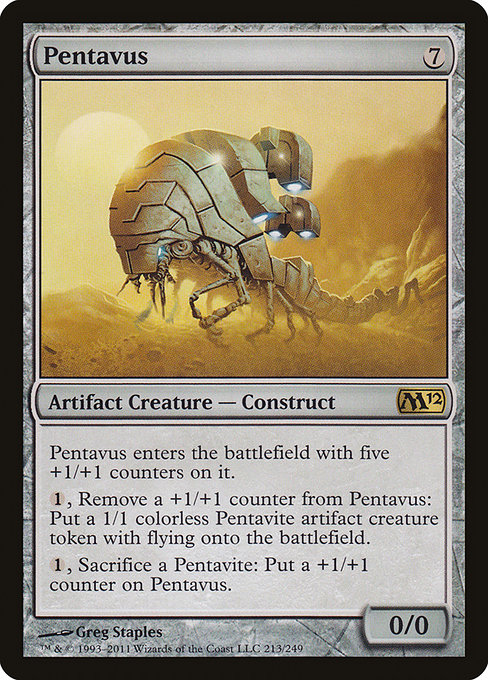 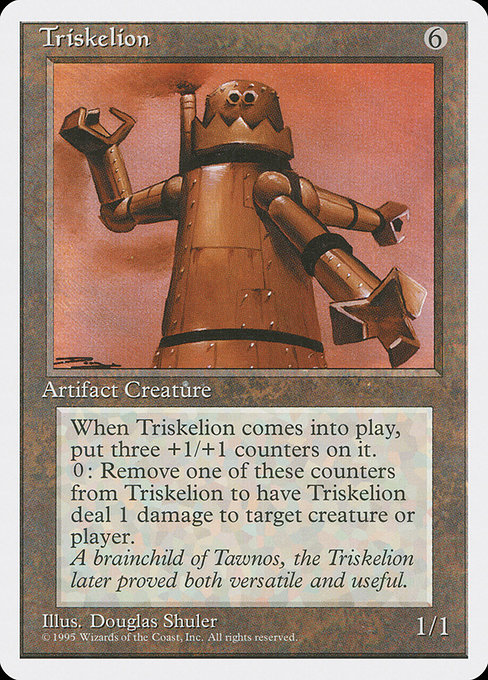 As for Triskelavite, it is only ever mentioned on the card Triskelavus, which in turn is a reference to both Tetravus and Pentavus. Not much else to say; it's one of the many cards mostly created for world building and lore, and not so much for game purposes.

I've also mentioned Camarid, actually, although briefly: do you remember the piece on the Homarid type? Well, this is him now. I mean, it's the child: Camarids are just Homarids' offspring. Mark Rosewater made it clear that they would not return, though, even if Homarid could. After all, they are just a case "the juvenile version of a creature being a different creature type."

Like with Triskelavite, Camarid is another creature type only available as token. It's mentioned on Sarpadian Empires, Vol. VII, but was also present in Fallen Empires, on Homarid Spawning Bed.

In the last few installments, I tackled quite a lot of token generators able to create tokens with a creature type unique to Magic. These subtypes never had any special development by the Magic design team, and usually they were limited to one or two card each. The only exception was Saproling, the typical token created through Fungus creatures, which can be generated in many different ways and is mentioned on dozens of cards.

What do you think of these creatures? Do you have any personal favorite? Let me know in the comments or on Twitter, and stay tuned for next piece!