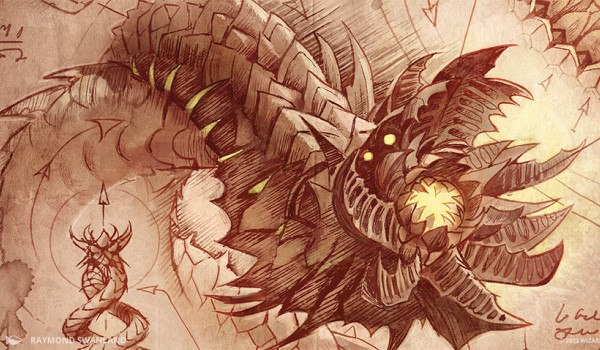 Outrage? On the internet?! Believe it or not, yes. It happened.

One of the first reactions to BRO Limited was a wild fear that it might be a dreaded prince format. Every format wears this crown at some point during the initial reaction cycle. It's as if people forget how much more prevalent bombs are at prerelease, and in Sealed events in general. They then panic and subsequently label the Draft format with the same diagnosis. Despite this initial outrage, BRO Draft has emerged as something far more intricate and nuanced than early fearmongering might have us believe.

While the reality is certainly better than the hype, admittedly, the format does include some game-warping cards. This week, we'll list the most powerful among them, and discuss how first-picking these bombs shapes our overall draft.

I really respect this dragon. It's the perfect Limited bomb. It generates immediate value. It's a big creature. Best of all, it can close out a game quickly. Even if we have a removal spell for it, it's still going to be a two-for-one. This flying Flametongue Kavu can stabilize a board, but with its Firebreathing, can also put things away fast. 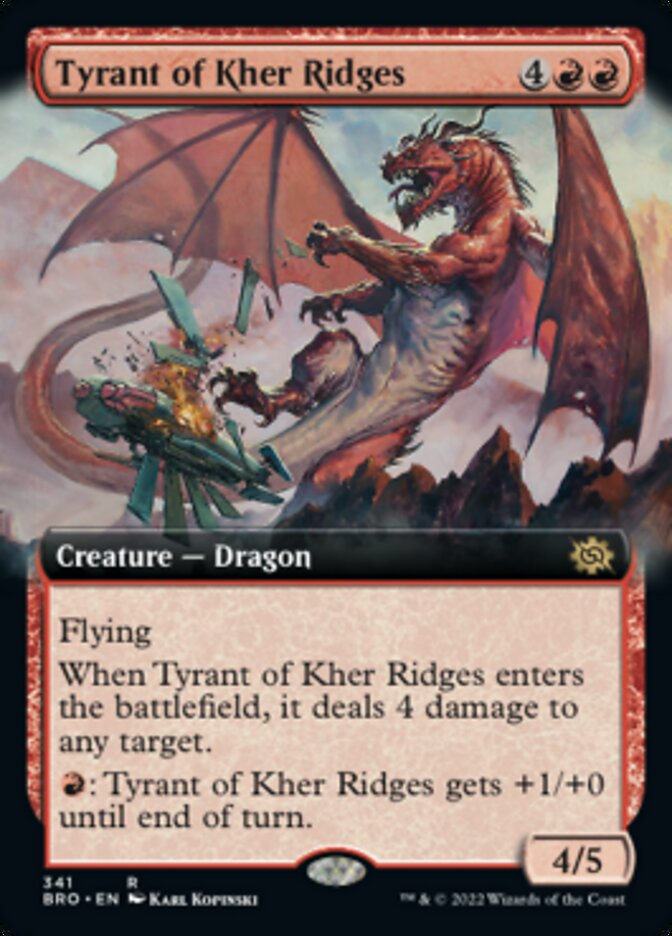 It does all this without feeling completely unfair. Six mana is appropriate for such a creature. This card reminds me of a different era. It's almost a pre-power-creep bomb, but somehow it still holds its own.

Whenever an opponent chooses not to cast something on turn three, this is my number one fear. It flashes in and creates horrifying scenarios each turn. Never has open mana been so scary. Flashing in a Mishra's Juggernaut or Scrapwork Cohort makes for an ambush with upside. Many of the unearth cards are way better if you can get an opponent to trade a premium creature for the first half of them, and the copter sets those up really well. 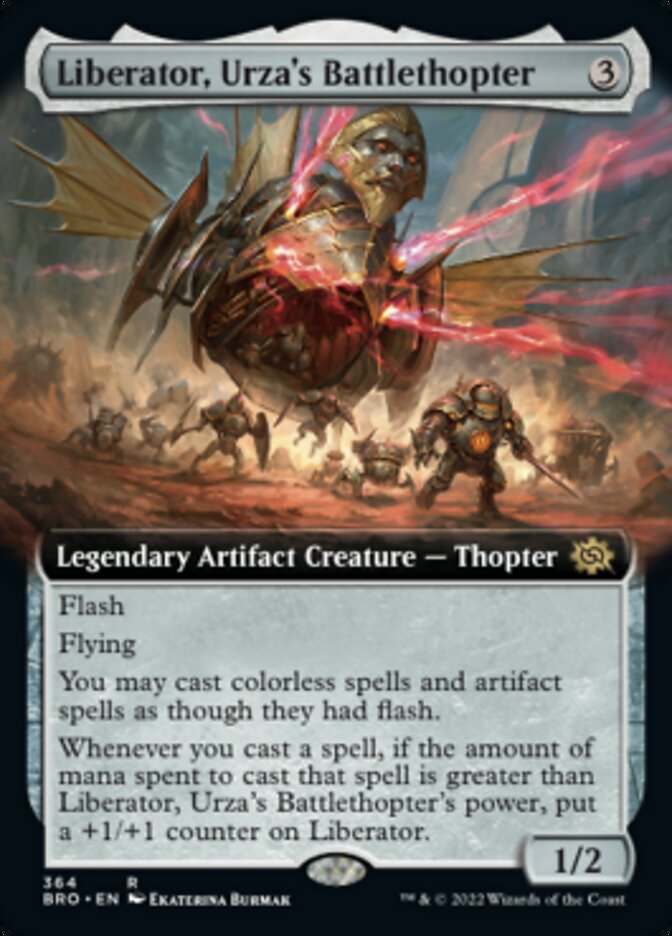 If that was all, then it would be a problem. However, the fact that it routinely grows to a 4/5 flyer without any work at all is what puts it on this list. That we can hit this with Recommission and pick it up with every mill creature besides Blanchwood Prowler is just gravy.

From an art standpoint, I'm not quite sure what's happening here. 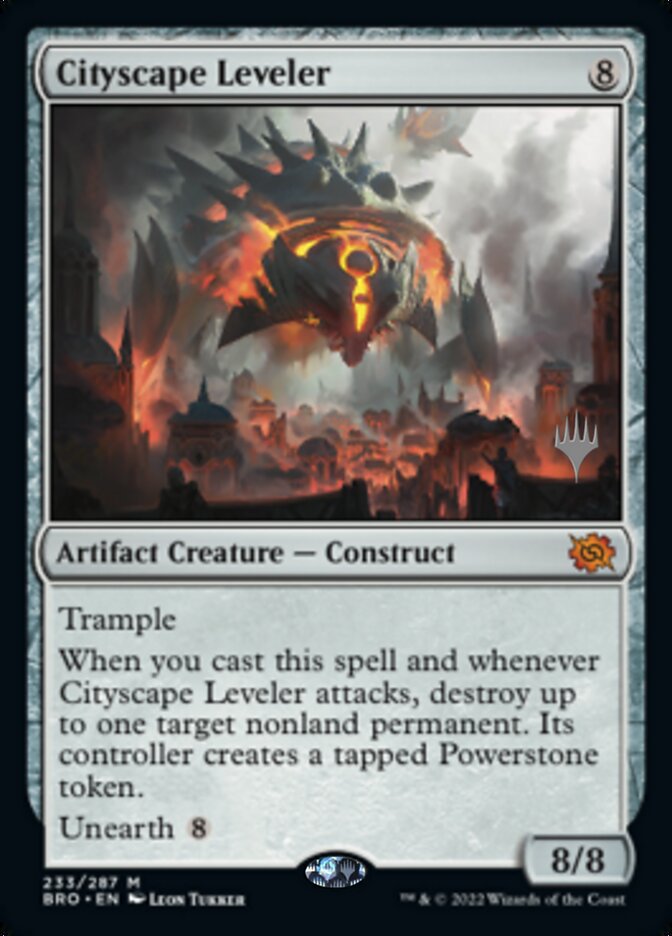 From a gameplay standpoint, I understand it completely. This massive threat comes down and immediately starts eating permanents and pooping out Powerstone tokens as grave markers. Trample accelerates the clock nicely. However, unlike the prototype threats in the format, we have no choice but to pay full price for this one. Eight can be a lot of mana, so we want to be sure to support Cityscape Leveler with cards like Argothian Opportunist and other forms of ramp. In addition to the top end in a ramp deck, it also makes for a great finisher in more controlling decks. Like many of the threats in this format, Cityscape Leveler does a nice job of reaching back from the grave for one last attack. However, this unearth effect is probably going to be the most impactful in the entire set.

While Portal to Phyrexia and Leveler, might be viewed as bigger and bombier than some of the cards that come after them on this list, the mana costs provide a significant barrier to entry. The scenario of wiping an opponent's board, followed by recruiting those very creatures onto your own army, à la God-Pharaoh's Gift, is a nightmare for anyone on the opposite end, in Limited or Constructed. 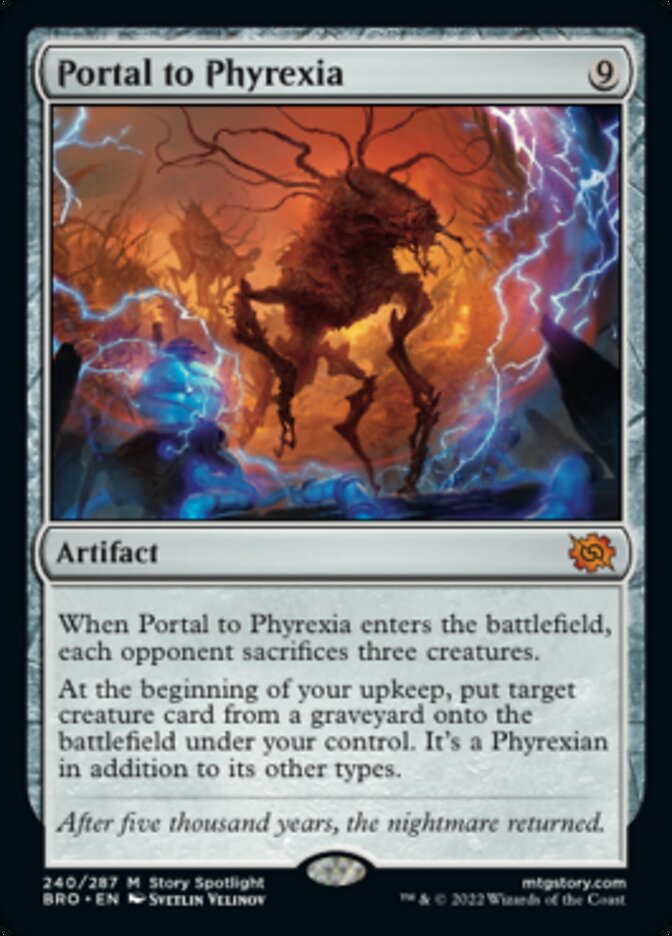 We can deal with Portal via a simple Disenchant, but often times the damage is already done. At full value, that "solution" comes out as a four-for-one. A few weeks ago, I wrote about reanimator as an archetype, and this card actively makes me want to include Repair and Recharge. Cheating this into play on Arena will make plenty of heads explode.

When this card was first played against me, I had to read it three times. It gets you free creatures every attack and then it converts those free creatures into additional cards. This army-in-a-can is the perfect addition to a Soldiers deck but will thrive in any deck capable of casting it. Recently, I played it to five wins in a five-color Citanul Stalwart deck, and it was great every time I cast it. 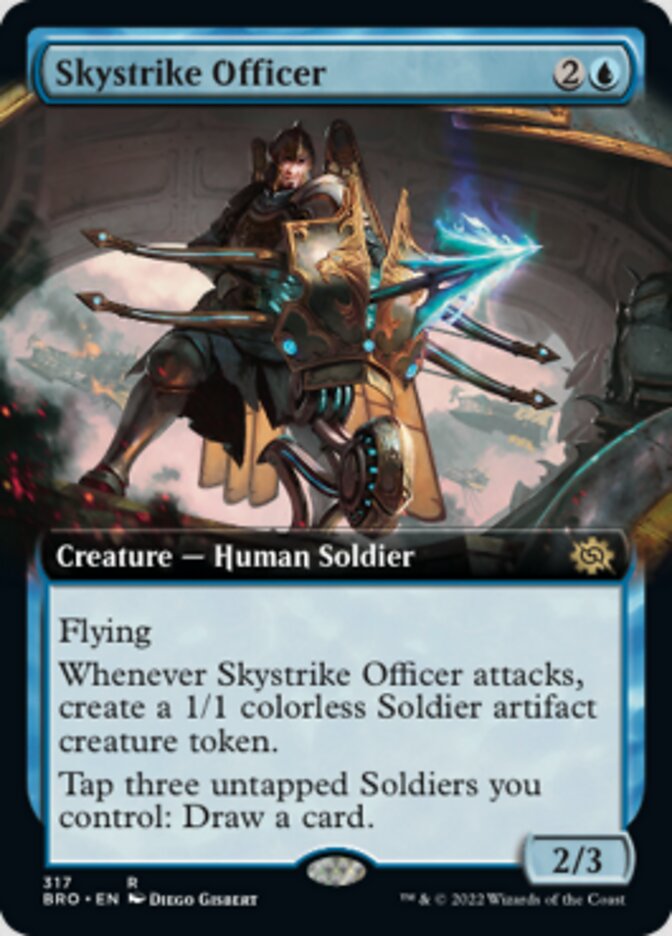 The two three-drop rare soldiers are a frightening combination. The one downside about this one is that it gets gobbled up real quick by Koilos Roc, Deadly Riposte, and even Gaea's Gift. The fact that it needs to attack to generate value can be a liability.

Urza immediately provides a Tempered Steel effect to all artifact creatures, so if we're aggressive, it's going to end the game very quickly. However, the real power lies in its second ability. It's a perfect control finisher and can win a game single-handedly if given time. We can start turning Powerstones into 3/3 creatures, which in turn help pay for more activations until our board state is overwhelming. Additionally, copying retro artifacts and Energy Refractor can keep our hand full. 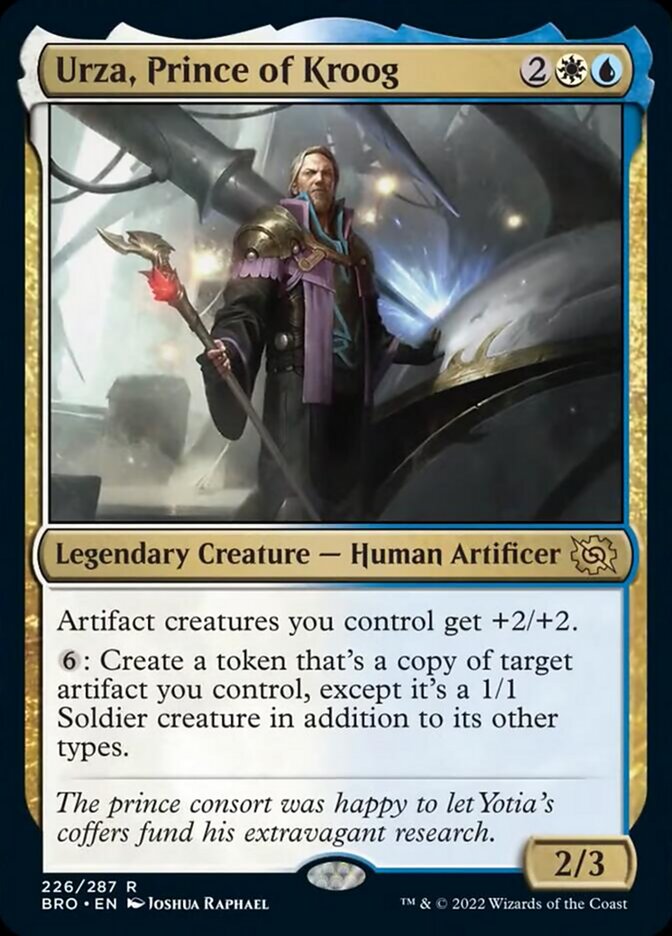 Simply put, The Prince is impossible to grind out. The one concern is having it removed in combat, causing all of your creatures to shrink before damage is dealt. That said, we should be playing around that once we've stabilized. This card makes for an excellent splash, especially because of the synergy with Refractor.

Versatility incarnate. This card can be a removal spell for our opponent's biggest creature, a board wipe for smaller creatures, or both. Additionally, we have the option to grow a creature with two counters and a temporary lifelink, or even a double-Raise Dead. 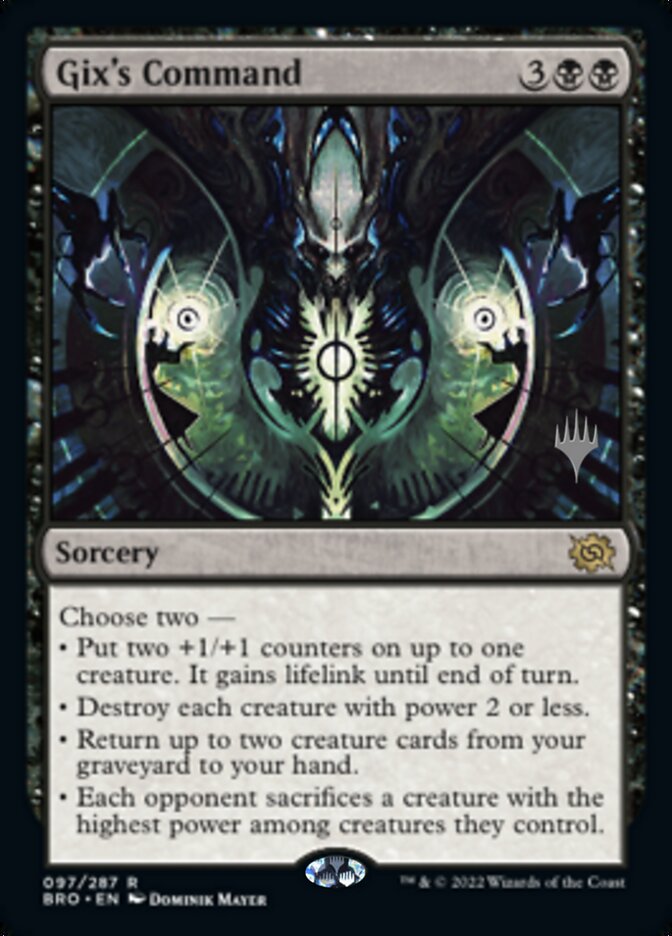 Most of the cards on this list are hammers. This one is a Swiss Army knife. Don't sleep on the power level, though. There are very few situations where this card can't help you get back into the game.

It comes down on turn three and generates an advantage every turn until it's gone. This card is frustrating in that it makes the entire game about removing it. It's a card that we want to deal with fast. The longer it sticks around, the more those counters add up. The second clause allows you to attack aggressively with your growing threats because as they trade off, you get fresh bodies to carry the counters. 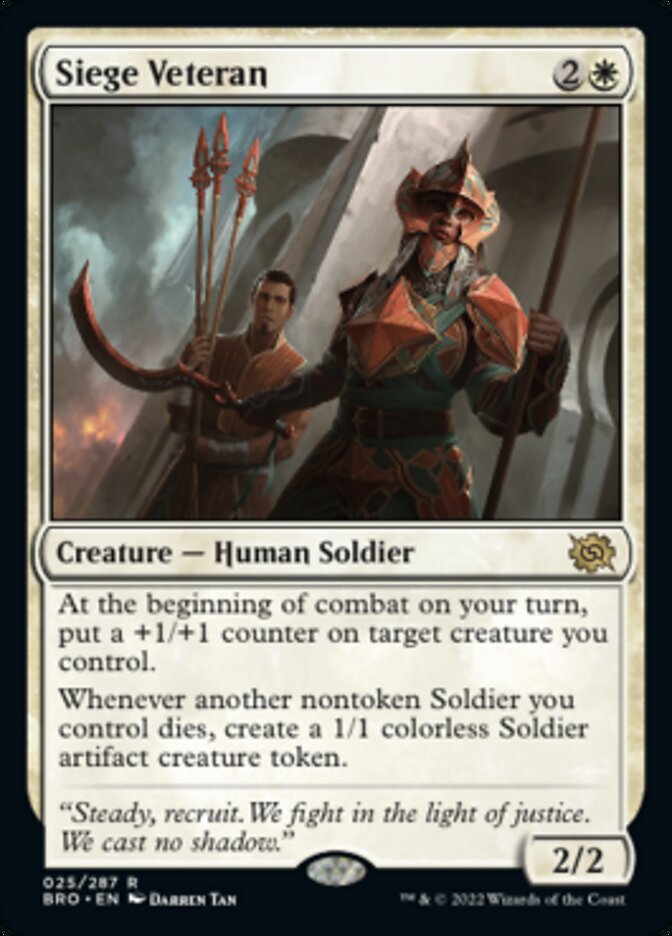 However, being a three-mana 2/2, the Veteran proves susceptible to plenty of common removal. A same-turn Disfigure is a lovely answer, but Excavation Explosion is nearly as effective. It plays around the common Enchantment-based removal, though. Hiding it behind a Prison Sentence or a Weakstone's Subjugation does little to blunt its impact.

No doubt, in preparation for Universes Beyond: Hot Wheels, Magic the Gathering has introduced a powerful trio of race cars on this mythic. 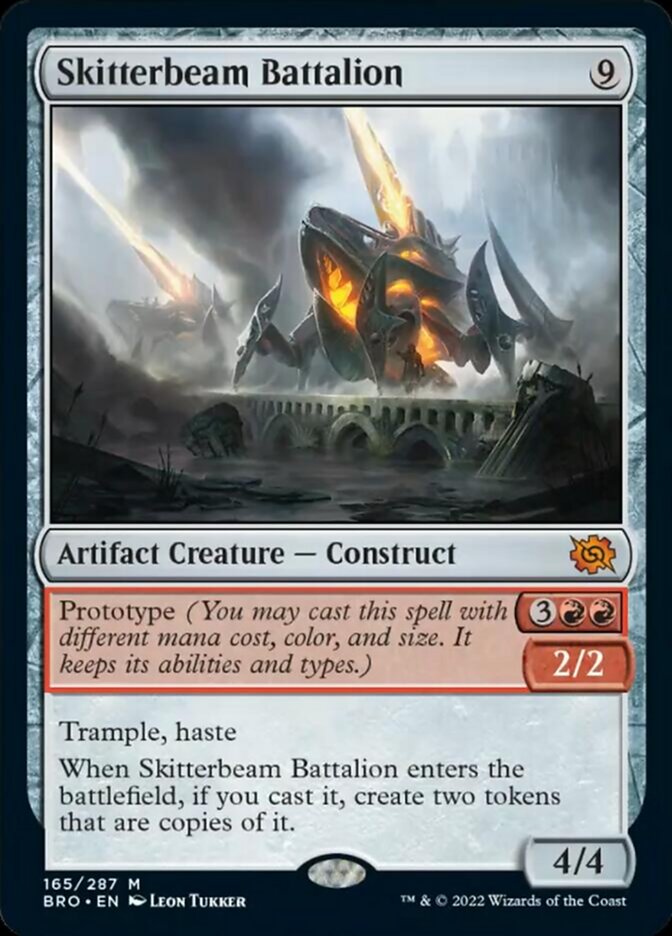 It is not easy to play around twelve haste damage. The nine mana needed to cast this for full value is an approachable sum when Powerstone tokens are part of the equation. However, the versatility of playing this for five to generate three speedsters is also a fine way to end games. The haste damage, plus the three bodies, plus the versatility makes this one of the most potent bombs in the format.

Third place may seem high for this three-drop. That has not been my experience. My experience, almost unilaterally, is that Simian Simulacrum kills me. 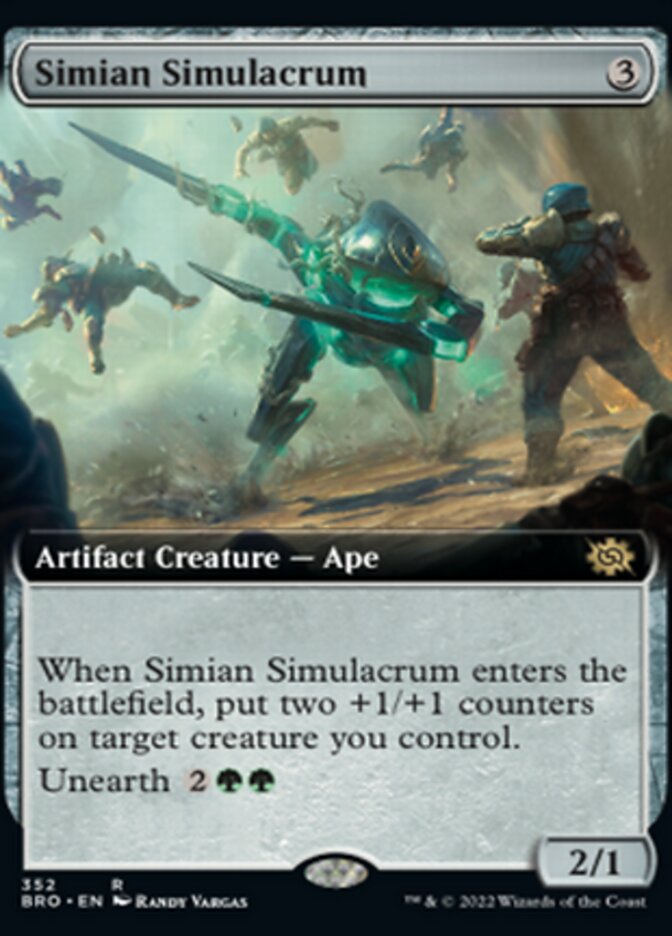 It is impossible to trade with this card at an advantage. It comes down on turn three, and the counters essentially have haste. It's hard for opponents to account for that sizing, which usually means immediate damage. Those counters make any random Ambush Paratrooper or Blanchwood Prowler a real threat in the early game. And that's only the first half.

For four mana, it comes back and represents another chunk of damage. Because of unearth, even a counterspell doesn't stop this card from gaining an advantage. On-curve, and especially on the play, this card is basically unbeatable. It's good early or late. Even if it gets milled over, those counters end up being a relevant play we can access seemingly for free. Simian puts opponents on the back foot, pressures life totals, and consumes resources with extreme prejudice.

This card has always been a bomb. It is a ruthless killing machine that can salvage even the most precipitous situations. Overwhelming Remorse is a clean answer. If we can block it and sacrifice our blocker, we can prevent massive life swings. However, the sacrifice themes of the deck also allow Wurmcoil Engine to generate value off of any of the typical answers. 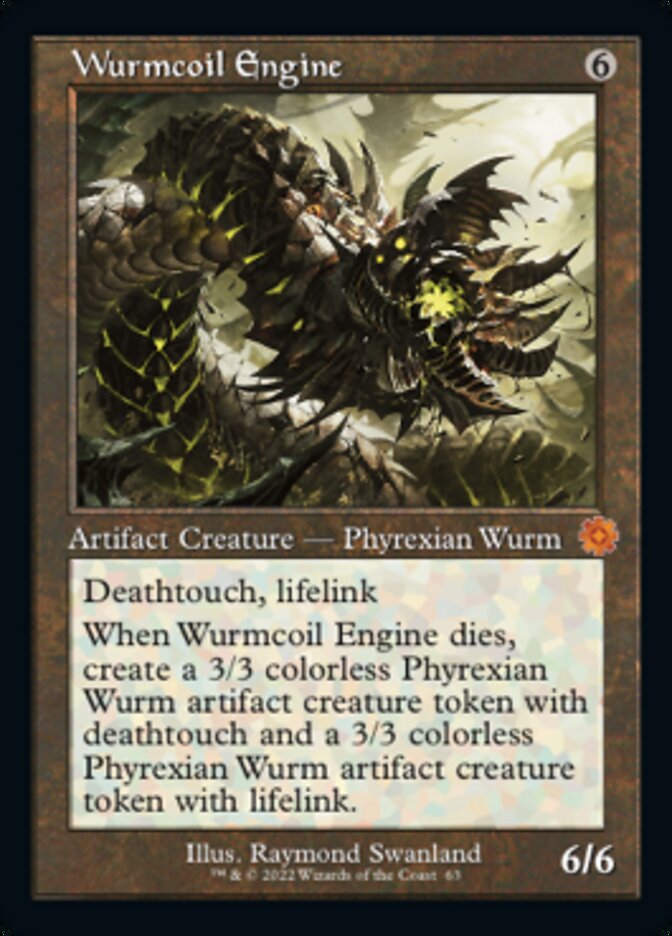 While the sacrifice decks are probably the best home for the only retro artifact worthy of our list, the headline is that this colorless Construct can go into any deck. It's the easiest card to first pick in the format, and it's hard to imagine ever passing this card. 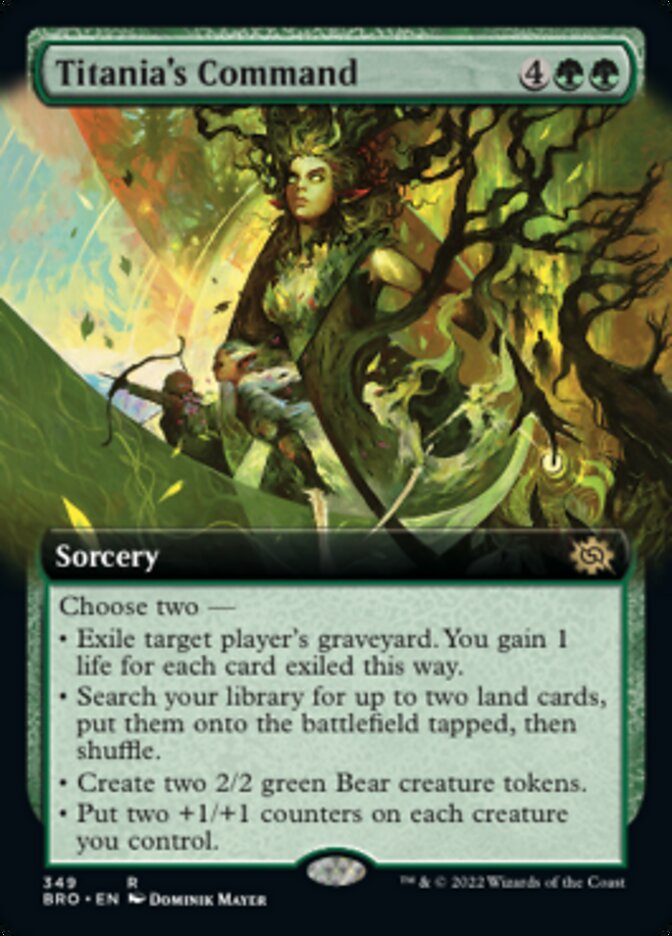 This is the single most powerful card in BRO Draft. Good on its own. Insane when we're ahead. Still very strong when we're behind.

The commands all offer a choice of two out of four possible options, but in most cases, Titania's Command values the last two. Getting two 2/2 bears, and immediately upgrading them to 4/4s as the rest of your team also gets two counters, can create such an enormous board that the game will typically end soon after. If our back is against the wall, we might need to exile a graveyard full of unearth creatures and generate some life, but if the board is at parity or even close for that matter, this spell will end the game in short order.

There are quite a few bombs that didn't make this list, and I'm all ears for disagreement. Fans of Visions of Phyrexia and Teferi, Temporal Pilgrim, the stage is yours! Different approaches to the format and different experiences from opponents will lead to different perspectives, so let me know about yours. What bombs have blown you out? What cards have carried you to glory? Let me know in the comments!

In Guilds of Ravnica, there was a common that crept up my pick order. The card was completely vanilla and easily overlooked. Because of its sizing though, it was weirdly effective in the format. Game after game, I'd watch opponents stumble as they started planning their attacks, baffled as to how they would answer the lowly Douser of Lights. BRO has a strict upgrade. 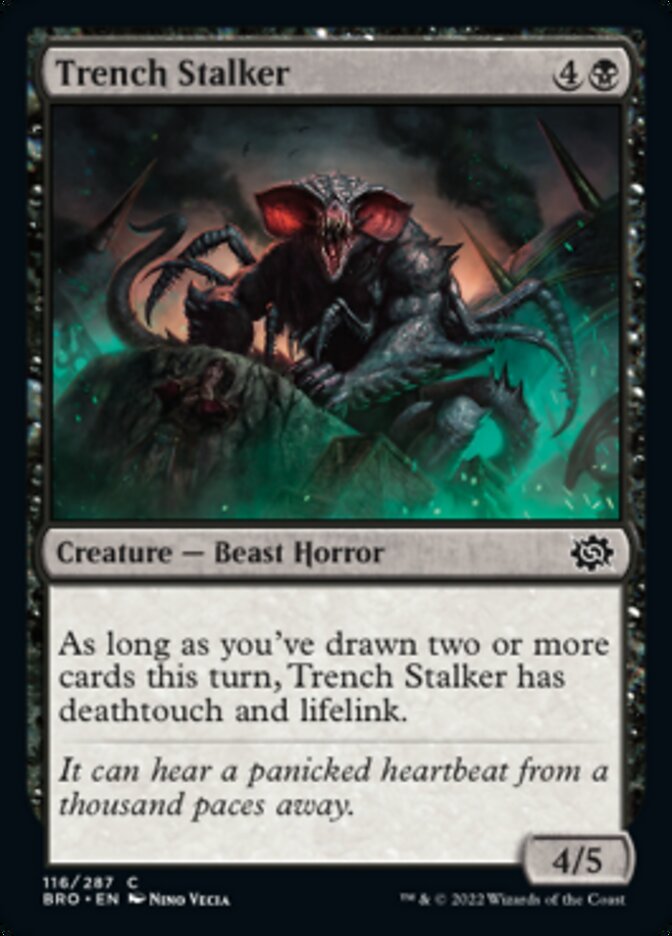 Most of the value of the card comes from the fact that it's a 4/5. Unfortunately for Douser Enthusiasts, power creep has made the format hostile to sitting back and blocking.

However, it only requires a single activation of lifelink for this card to make the best defense out of a good offense. Pairing Stalker with a Mightstone's Animation, or tagging a fellow attacker with a Moment of Defiance, will generate a huge life swing. This is a reasonable strategy to help protect your life total against aggressive decks.

In my slower black decks, I'm usually pretty happy with one or two if I have a couple of ways to activate its lifelink. It isn't a card that I'm looking to take early, but if I'm playing a slower game, I need to make sure I can outlive a top-decked Excavation Explosion or an active Penregon Strongbull.