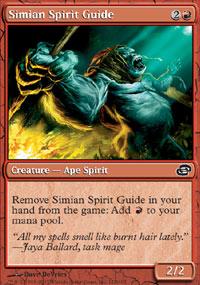 Simian Spirit Guide exploded this weekend, but now you have to wonder whether it’s a good hold.

Today Mike Lanigan looks at underplayed Modern cards. These cards are undeniably powerful, but for whatever reason have yet to catch on. Mike makes the case for jamming them in decks and picking some up as specs.

The new chapter of Sylvain’s Nine Months of Portfolio Management series deals with his Modern positions. This category of his portfolio was by far the most successful, and Sylvain explains to us his strategy to make the most out of Modern opportunities.

The 2013 MTGO Player of the Year explains how to play and sideboard with this Modern control deck. Includes a Visual Sideboarding Guide!

In today’s installment Jason sings the praises of Twitter’s contribution to the Magic community, offers up a visual guide to the world of Magic cuisine and discusses the latest Grand Prix results.

Cavern of Souls is going to redefine many formats, prepare for the move before everyone else figures it out.

Mike Lanigan takes a look at a post-bannings Modern.

Hello, my name is Kyle Kloster, and I’d like to discuss Legacy Reanimator. I’ll talk a bit about my experiences working on the deck since the banning of Mystical Tutor and look at some of the problems (and my solutions) with the deck in the current format. The deck’s popularity has been declining since the […]

My last article got some…mixed reviews. I got emails saying how much some of the readers enjoyed the article, but some of the comments gave me a different impression. Whether or not you felt like the article accomplished its intended goal, I still appreciate feedback. To be honest, the negative feedback actually helped me more […]