I had intended on hitting on some of the Rares previewed this week, but I’ve decided there’s more pressing information to share with you all. When I was first starting out at Quiet Speculation, my first Spoiler season was almost exactly one year ago, when we got Mental Misstep. Immediately internet buzz was polarized, but I got down to brass tacks and isolated Legacy cards that stood to gain or lose as a result. Many of you, who picked up Candelabras from an even earlier tip from QS, were able to get out before prices plummeted by about 50% (over $100). After more consideration from last weeks first glance at Cavern of Souls, I want to look at Legacy again and see what impact this will have on that format and what we can do to make some gains. 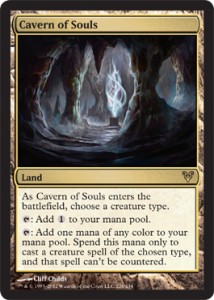 Cavern of Souls does two things (mana fixing and countermagic protection) and it does them both well. Not only that, but the opportunity cost of running them is fairly minimal. So we can expect that this card will certainly shake up almost every format that exists. Even naming Golem and protecting a Lodestone Golem from a Force of Will in Vintage is extremely relevant, without considering the color fixing at all. Zac Hill, Former Pro-Tour T8'er and R&D Devloper, wrote an article about the card last week, in which he said about Cavern of Souls, "We expect it to define almost every format in which it can be played." Let's redefine our valuations then.

What cards stand to lose here?

Cards that lose are narrow countermagic, especially ones that tend to counter creatures. The card I expect to plummet here is Spell Snare. While many of Spell Snare’s targets are instants and sorceries, a large majority are creatures in both Legacy and Modern. While I don’t expect Spell Snareto disappear, its role is just going to change. It’s no longer going to be a hard stop-gap against cards like Tarmogoyfand Dark Confidant, but will continue to prey on counterspells itself. It will protect your Planeswalkers and Sorceries from Counterspell and Remand.

Spell Snare is currently an $8 card, but only a year ago, before Modern’s rise, it sat at $2 for a very long time, despite its appearance in Legacy. This card is going to fall like a stone. I’m selling out of my personal set, and I’ll buy them back later. Remember, selling now at $8, and buying back at $2 is a /real/ profit of $6. You still have your Spell Snares, and $6 in your pocket.

Another card that stands to lose playability is Daze. Daze is most frequently used to combat other counterspells once you’ve tapped out for your threat. If your threat is uncoutnerable, thanks to Cavern, the need for Daze diminishes. While I don’t expect the price on Daze to change much, I also expect it to start seeing a lot less play.

What cards stand to gain here?

Decks that can ignore their opponents creatures stand to gain a lot. If the quantity of countermagic people play really does decrease, Combination Decks stand to gain the most, and not even just the Force of Will Combo decks (but yes, them too). Spanish Inquizition, Ad Nauseum- Tendrils, Show and Tell (all varieties) and High Tide will run rampant if Creature Decks become overly common. This means all the appropriate combo pieces stand to gain.

That includes, but is not limited to, Lion's Eye Diamond and Chrome Mox. Those two specifically are strong buy’s in my opinion. Chrome Mox is currently only $10, but has seen heights of $15 historically, and I’m looking to pick up a quick $5/card on this one. Lion’s Eye Diamond on the other hand is at its historical high, after bouncing between $30-40 over the past year. I don’t expect it to shoot up much higher, but it does belong in both versions of Tendrils, and it wouldn’t surprise me if it hit $50. I’m not suggesting a big move on the Diamond, but Chrome Mox is worth sinking some money into.

Other cards that stand to gain take advantage of reliance on the Cavern. Wasteland, which already slots into every Control and Tempo deck (or a deck that has land tutors) will be at a premium. In aggro-control mirrors, like Merfolk, nuking your opponents Cavern so you can counter their Lord of Atlantis is no joke. Keep in mind, that most decks like this, also have Aether Vial to sneak guys in through countermagic anyway. Wasteland has hit peaks of $50, but currently sits at $35. This will likely stabilize closer to $40, and that may or may not have anything to do with the Cavern.

Last group of cards I want to talk about is strategies that actually move up the list in playability as a result of this land. The two that come to mind are Goblins and Slivers. Yeah, I said Slivers. Slivers has always been a poor strategy, but there are always people who play it, without them having to worry about their dudes being countered, you may start to see more of this Tier 2 deck floating around.

Goblins on the other hand, has already been making a resurgance, and this is just the icing on the cake. Making Goblin Lackey uncounterable on Turn 1 is no joke. Lackey, which has bounced between $7-10 is currently at the lowest end of that range and is prime pickings for a spike. The same can be said for Siege-Gang Commander which can be found around $1, and has proven to have the capability to bounce back to $2 multiple times in the past.

So there’s some shifting to be done of our evaluations. These are the most clear winners/losers as a result of this card, but there has to be more. You can always Next Level this, and it’s important to do so to stay ahead of the game. Just don’t get so far ahead that it takes the market too long to catch up to you.

For example, if the Legacy metagame shifts as I’ve suggested, we may see a traditional U/B control deck reappear that uses things like Duress and Thoughtseize to control their opponents options in combination with a counter suite and Wastelands to pick away Caverns. A deck like this probably also has Crucible of Worlds in the Sideboard at a minimum.

I don’t want to jump on cards like this until we see the first stage actually occur. We just want to know what moves to make when it happens so we can maximize our gains without having to hold on to these cards for ages.

What are other Next Level moves are there that will result after the initial shifts? Are there any other cards that immediately gain or lose value, or did I miss the mark on any of the ones I’ve listed here? Cavern of Souls is certainly going to shake up Legacy, but how much, and how are you preparing yourself to be profitable?

2 thoughts on “Insider: The Cavernous Future”