Unless you happen to live next to a local gaming store that has a massive preconstructed deck inventory at very reasonable prices (which, as we’ll see next week, doesn’t exist – at least not online, anyway), chances are your quest to assemble a collection will include more than a few stops over at eBay. The devil’s deal of eBay is a simple one: you can get what you’re looking for at a steal, but seldom when you actually want it.

As a neophyte collector, with only a few decks to my name, that suited me fine; I was often finding deals for all sorts of decks, and I didn’t care which ones they were so long as I didn’t already possess them. I decided that I would be willing to pay $5 per deck, including shipping, right off the bat. Although I’d later increase it, it was surprising how much fell within that limit.

I quickly discovered that there are two kinds of people who sell goods on eBay: those who run things as a business, and those who use it to get rid of things. Those of the first camp set higher prices, happy to relist things that didn’t sell (while rarely dropping the price). With few bargains to be had I did very little business with the merchants. The other camp, however, not only tended to price things lower, they also usually didn’t have the patience to space out auctions. Sometimes they’d even list multiple auctions for copies of the same deck, which split the bidding and could often keep the final damage low. My first real coup that showed me what was possible with a little patience came when I purchased 15 sealed theme decks for just under $60 (including shipping), all from one seller, all closing on one day.

I’m going to make the assumption that those reading this are familiar at least in general with eBay and how it works. For those eBay masters out there, you might find precious little here today that you don’t already know (such is the wealth of experience). By the same token, though, there may yet be some things still left to learn. Given the ease with which one can assemble a solid collection through this marketplace, it bears some exploration all its own. The remainder of this article will be a summary of the lessons and tactics I have learned along the way. As always, your mileage may vary.

“Sniping” is the disparaging term used for the practice of submitting your bid right as the auction is about to close, rather than “fairly” submitting it when you come across the auction and letting the market determine your success or failure. There has long been some controversy amongst the eBay member community as to the fairness and ethics of this practice, and indeed innovations in online auction methodology have been implemented with the aim of counteracting this practice (see: “popcorn auctions,” where any new high bid automatically lengthens the duration of the auction).

I’ll leave the question of fairness to each person’s individual conscience. If you find the practice objectionable, skip to the next header below. For those like me who see this as simply using the software in a manner it enables, away we go!

The advantage sniping offers is simply that it keeps your competitors in the dark about your interest, and lessens the chance of sparking a bidding war. Say you find an auction for a brand-new Duel Decks: Jace vs Chandra with two days left to bid and a current high bid of $22.00. Since these can ordinarily reach triple that price at the close, this is a good place to start. But bidding now tells the current high bidder that they have competition. Chances are they’ll get an email alert telling them that they’ve been outbid, and may well circle back to up their bid. In other words, it’s on. They outbid you, you outbid them, somebody else jumps in and bids and by the time the auction’s done it’s up to $75. You might have won it, but at that price you sure don’t feel like a winner.

Instead, make note of the auction’s closing time, and schedule time to bid right as it closes. Remember, to cut it close as you only get one shot. Make sure you bid the highest that you’re willing to pay for the item. If the high bid is less than what you’re bidding, chances are they’re not going to have time to try and reclaim the lead.

2. Be Thorough in Hunting 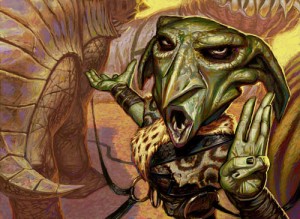 This is one that often goes overlooked, but if you’re willing to trade in a little time and effort, you can save yourself a good amount of money. Most sellers of Magic cards have a pretty good idea of what they’re doing. They title their auction descriptively, including keywords like “MTG” and “Magic” so that it comes up in most searches. Often they’ll have the item in the right category, to ensure visibility in category-based window shopping. In short, they do what’s needed to ensure maximum traffic and exposure, and they are rewarded for it.

Occasionally, though, you get someone who doesn’t bother to go through these steps and list something sloppily. Perhaps they’ll simply title it with the deck’s name, like “Judgment Painflow Deck” without any added tags like “MTG” to put some wind in its sails. If all you ever searched for was “Judgment theme decks,” you’d pass this potential bargain right on by. If you’re keen to get the maximum value you can, leave no stone unturned.

Make sure as well that you also search for full sets of theme decks. Oftentimes you can find a cheaper price on buying all four or five of a set’s decks at once rather than assembling the sets piecemeal; as a bonus you’re almost certain to save on shipping. A search for something like “MTG Ravnica theme” or “MTG Zendikar intro” are good places to start (but as above, aren’t the only searches you’ll want to run).

This tactic is one for those who don’t mind typing up a little capital, and are keen to get a deal one some of the older decks. As I mentioned in last week’s article:

Here’s an important observation: you can buy most precons for between $5.00 and $8.00

Of course, that doesn’t always apply to some of the older decks, particularly from Tempest and Urza blocks, does it? While you can on occasionally find one of these at a deep discount, in general this is going to mean playing the long wait… or finding a creative solution.

Here’s one example. Let’s say you find a theme deck box from the set of your choice on eBay for $150. This gives you a dozen theme decks- three of each one. Opening the box, you put a set aside for yourself, then turn around and post the remaining eight on eBay for an attractive price, say $14.95. Sell them all and you’ve made about $120, which means you paid around $7.50 apiece for your own: a full set at less than half of the typical $20.00 per deck pricetag. This is the simplified version of things; shipping costs, eBay fees, payment methods, and other such also are factors of time and money that can vary, but are generally minor.

Thanks for tuning in this week as we build out the Preconstructed Deck Buyer’s Guide. No such guide can claim to be comprehensive without a section on eBay, but for those who are already very familiar with the best tactics to a successful eBay experience, take heart: next week we’ll be jumping into the retail section of things, starting with the Modern Era.