Greetings from the rainy, windy mountains of Western Montana!  I’m spending the week here, just outside Helena, parked in a field by a lake.  Yesterday we saw a giant double rainbow.

What better place to hole up inside, squashing Trader Tools bugs and adding awesome new features? 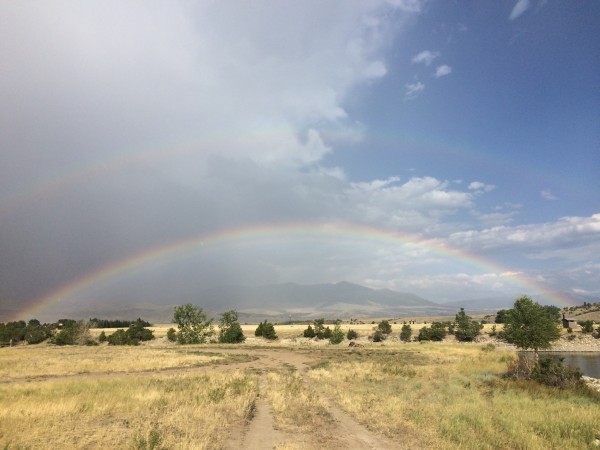 No, that’s not a stock photo.  That was the view from my living room window last night.

Anyway, while I’m traveling around the US in my motorhome, I stop into game stores and troll Craigslist for Magic collections.  I had to sell most of my collection to purchase this RV, so now I’m in the process of rebuilding.  As much as I love Magic cards, I also like to be able to enjoy the beautiful places I visit, so I don’t want to spend all my free time sorting and selling cards.

What Is Trade Routes?

Before I get to the new features and bugfixes, I realize not everyone knows what Trade Routes is or what it does. Quite simply, it’s probably the most powerful tool that QS offers Insider members.  It’s saved me–personally–hundreds of hours of pointless labor, and it allows me to extract the most value out of my cards every week.   If you’re not familiar with Trade Routes, watch this quick video that shows you how it works.

One of our core beliefs at QS is that you should only ever have to inventory a Magic card once.  To that end, we’ve invested many hours of developer time into automation tools that ensure no one has to waste time managing their collection.

Our importer can take your spreadsheet and quickly turn it into a Trader Tools list, helping you correct errors along the way.  Of course, you can always create a new List within Trader Tools, which is how I prefer to work, as it’s faster than creating a spreadsheet from scratch.  You can also import your PucaTrade inventory.

The point is, you can take lists you already have and use them without having to waste time re-entering cards.

Once you have a list in Trader Tools, that’s where Trade Routes comes into play.  Trade Routes is a way to turn Magic cards into cash, quickly and easily.

It does this by taking a list of cards, checking their prices against our robust database of buylist and retail prices, and intelligently splits up the list based on which merchants are paying the most for your cards.

So far, so good.  That’s one more layer of intelligence than you had before!  I remember the days, back when I was running a retail game store, when I had half a dozen buylist tabs open and had to manually check every single one for every single card I had.  I cannot tell you how many nights out with friends I skipped because I had  buylisting to do, or how many Saturday afternoons in the park with my girlfriend I missed because I was too busy trimming down my overstock.  It was a massive waste of time!

So, Trade Routes fixes that problem.  But, if we stopped there, we’d still have to manually go to the merchant’s buylist website and enter each card, one by one.  I forget who said this, but it’s one of my favorite quotes – “Copy and Paste is not a scalable business solution”. This is where Trade Routes gets good;–we’ve taken the time to dissect the internals of how each merchant’s buylist works, and our tool automatically outputs data in a format they’ll recognize.

With some merchants, like ABU Games, Card Kingdom and AdventuresON, we have a direct link to their shopping cart system.  Once Trade Routes has divided up your collection, you can go to each of these merchants’ tabs and press one button to populate your buylist cart on their site.  Then you can check-out as normal, without having to re-enter cards.  This was another process that wasted countless hours of my precious and quickly-fading youth.

The problem with a system this fast and efficient is that sometimes it’ll try to sell cards that aren’t worth selling, or cards you don’t want to sell.  Sure, you could split up your list manually before sending it to Trade Routes, but come on, ain’t nobody got time for that.

We added a minimum price filter so that you could tell TR to ignore all those 2 cent cards that ABU Games likes to buy.

Pro Tip:  In packages up to about 13 ounces, a Magic card costs about 1.5 cents to ship.

That’s great, too, but we can do better, and that’s where today’s updates come into play. Between doing my own buylisting and listening to our Insiders’ suggestions on our Forum, I found a few workflow problems that could be solved with a few days of developer time.  The description of the problems and their solutions are below, along with some screenshots showing how to make use of these new additions.

Problem: Trade Routes is trying to sell cards that aren’t worth selling.  The existing solution to filter out cards by minimum price got us half-way, but what about expensive cards that still aren’t worth selling?  This is where we teach our Insiders to look at the card’s Spread, which is a short-hand for understanding how much less than retail price you’ll be getting when you sell to a buylist.

Reminder: 50% spreads are basically average.  Spreads smaller than 30% are very favorable, especially since many of our merchants pay out 25-30% more in store credit.  As a rule, I don’t sell cards with spreads wider than 60%.  I will be patient and wait for a buy price that reflects a narrower spread.

Solution: Trade Routes now allows Spread Filtering.  You’ll see a new box on the Trade Routes screen that asks you for a maximum spread, defaulting to 50%.  This ensures you’re not selling cards for way less than they’re worth.

Problem:  After submitting buylist orders, I had to go back and manually remove cards from my list.  This was obviously a non-starter, as Trade Routes is at its best when you’re dealing with large quantities of Magic cards.  In a system designed to work at massive scale, having this bottleneck was just unacceptable and was wasting hours of user time.

Solution:  Now, after you click the Start Selling button, you’ll be given a link on the confirmation screen, to a new list that Trade Routes created on your behalf, minus all the cards that are being sent out.  If you decide not to send out the orders, or were just testing out Trade Routes, no problem–you can just ignore that list.  Otherwise, just click it to make it your active list.

Problem: Troll and Toad wasn’t set up for Trade Routes automatic integration (also known as Direct-to-Cart).  The way their buylist was set up, we couldn’t use the normal technology we developed to do one-click integration.   This meant that Insiders who wanted to sell to Troll and Toad had to do the dreaded re-entry.  I know that I have often disabled TNT in my Trade Routes for this exact reason, as I’d rather take a little less money on my cards than waste time re-entering them into someone else’s site.

Solution:  We found a way to utilize TNT’s CSV buylist uploader that allows Trade Routes to talk to it effectively.  It’s not quite as easy as the one-click solutions for Card Kingdom, ABU Games and AdventuresON, but 2 clicks is good enough for me!  On the Trade Routes cart screen for TNT, you’ll see a button that’ll let you save a properly-formatted CSV, along with a link where you can upload it.  Disregard steps 1 and 2 in the example below, since Trade Routes will auto-generate and edit the file described in the first 2 steps.

Export the CSV as a file by clicking the nice green button, then…

Upload the file via the uploader on TNT’s Site (Trade Routes lets you start at Step 3!)

Problem: Sometimes, the right way to out a card is through PucaTrade.

Solution: Easy!  We added an option to dump your entire list to into your PucaTrade “have” inventory.   This won’t affect the list in Trader Tools, so if you choose to send a card via PT, you’ll want to remove it manually. 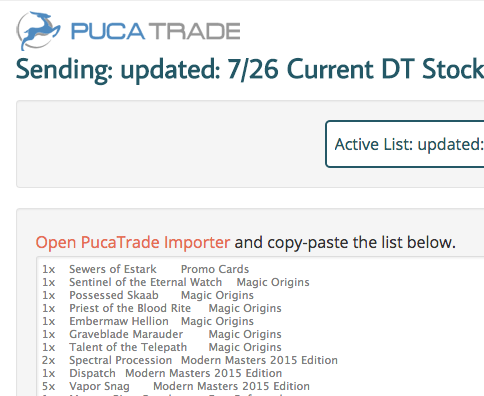 Copy the output from Trader Tools… 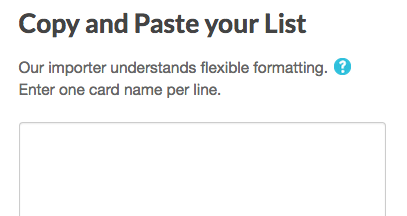 …Then just paste it into PucaTrade

Problem:  I want to be able to import my MTGO collection!

Solution: So, now Trader Tools can import from MTGO lists.  We plan to add MTGO prices in the very near future, so this is just one small step.  MTGO-specific editions will need to be added, so for now, work around that by choosing a different edition. 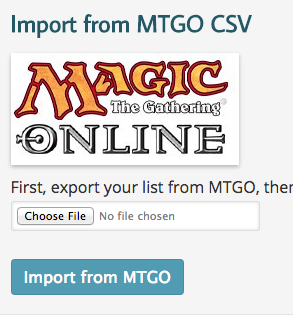 So, that’s what we’ve been working on lately! We have a whole pipeline full of interesting things that’ll make your Magic trading faster, easier and more profitable. We’re really excited at how efficient Trade Routes is becoming, and I’ve been using it almost every day to crunch through my overstock. As I said in the video, I’m saving up store credit from buylisting low-end cards that I’ll never need, and hope to buy some Vintage staples and / or Power soon!