Today I want to take a brief hiatus from writing about internet trading to discuss my States trading experience and give some ideas on rebuilding a binder after it has been cleaned out by a dealer. Connecticut States was a pretty good size, with a little over 150 people, so I figured there was going to be some good trading opportunities. In preparation I had picked up every Ratchet Bomb I could find from all the local people as well as the Scars duals. I started the day with 8 Ratchet Bombs and picked up a few as the day progressed but by the end they were all gone. I was also able to pick up some Frost Titans cheap and flip them pretty fast as people are realizing more and more how great a card it is. I have to admit I didn't really give it much thought at first but now I wouldn't even want to sleeve up a deck that didn't include them. If you can pick these up for $6-7 now grab them up since I honestly feel you will be able to move these at $10+ in the near future.

I also had the opportunity to trade up to a Tarmogoyf. I ended up giving about $45 in trade value for it which isn't terrible but not spectacular either. I don't remember the exact trade but it was a Molten-Tail Masticore and a bunch of smaller rares, including three of the new Scars duals. I figured that I would be able to get more for this if I listed it online anyway but as it turns out, future complications would end up having me sell this to a dealer so the trade up was great for that reason. I'm sure it is common knowledge by now but when you are going to move the cards to a dealer you want to have higher value cards. I ended up with $39.40 in trade credit for just that card but if I tried to sell the cards I traded for it I would have been lucky to get half of that. 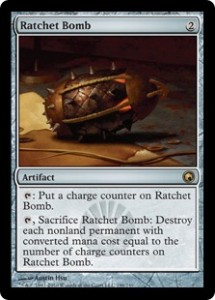 Now I want to tell you a side story about the main event that ends up with me basically having to sell my binder to a dealer to replace some cards. My fiance wanted to play in the event as well so I sleeved up Mono-G Eldrazi for her. She started 4-1 before finishing 4-4 while I played U/G/R Destructive Force and got dreamcrushed in the penultimate round by triple Summoning Trap on turn 4. I finished 6-2 which is upsetting but not nearly as much as what happened next.
We get home and I start to put everything away but I notice that I'm missing the mono green deck. We search everywhere and she even goes back to the event site but it is nowhere to be found. We think what most likely happened is that she took it out of her purse before we left when she was searching for something else and forgot to put it back in. While it would have been nice if they had turned it in to the TO I knew better and realized it was gone before she left for the event site again.

Fortunately my trade binder was meaty enough that I could replace everything so I shipped the cards to a dealer for trade credit. I was able to get everything back plus some Scars product for drafting. Of course this left me with an abysmal binder but that gave me an opportunity to discuss the following with you. What are some ways to fill up a binder without spending cash?

It took me two days of trading to get the binder back to a respectable level, and just in time for FNM and a big win-a-case standard event this weekend. First let me list out what was left after sending the cards in:

There are a couple of decent cards left but overall this binder is full of fail. At school the next day I tried to make some trades but things weren't working out well so I had a “sale”. I announced that the junk rares I would trade away at a dime apiece. This allowed me to transform some of my junk rares into junk rares that actually see some occasional play. Those rares I could trade up to slightly better rares and so on. After making a few trades like this I moved the price up to a quarter per rare and started 'selling' my binder. Normally a binder sells itself as people are able to find cards they actually want. When the quality is this low you have to resort to other tactics. Talk to the people you are trading with and figure out what they like to play, what decks they are building, etc. Then sell them on cards they could possibly use for it. You will probably have to take a loss on some of these trades but I will gladly trade away ten bargain bin rares for a $3-4 rare in situations like this.

Of course you can always use this tactic when trading but in this situation you are almost certainly forced into it. At the end of the first day I had picked up:

Which certainly improved the quality of my binder quite a bit. By the way, I had just finished reading Flores's article about his Pyromancer Ascension deck with Archive Traps as well as some tweets between himself, Gerry Thompson and Patrick Sullivan so I picked a few traps up and traded them almost immediately to someone who I know likes to play Pyromancer decks.

The second day lead to a pretty interesting big trade. I was sitting around when I noticed someone was dumping a ton of magic cards onto a table so I went over and saw some gems staring up at me. I asked if they were for trade and he said they were but he didn't know what decks he was building yet. Fortunately I noticed he had a mono-black EDH deck sitting next to him so I asked if he was looking for cards for that. He was and I handed him my own mono-black deck. I picked up the following:

I know that this is cheating in a way but it was hard to pass up especially since I could replace all of the cards once I got home. Either way it is a good trade for me and gets my binder back to a decent state.

When that trade was over someone else at the table had mentioned that the person I just traded with was willing to trade his Elspeth Tirel towards a Sorin Markov if he had not just traded for mine. While this may seem like a shockingly poor trade to most of us we have to remember that in the mind of a casual player they often don't care about price as much as they care about getting specific cards they will actually use. So on the one hand it can be easy to get some cards off of them at a good price but on the other if you are trying to get a card they actually use it can seem impossible.
Anyway I went back to the guy and after talking we settled on his: 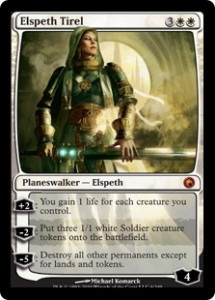 Now I think Elspeth 2.0 is going to drop in price because I just don't see it being nearly as good as the old Elspeth. I could be wrong of course but I will happily trade it away at $40. The other person who was interested in the Elspeth got it for his:

Which works out perfect for me because it puts some more $2-3 rares in my binder but also a high value one in Molten-Tail Masticore.

One final thing I want to mention is the Seer's Sundial I traded for in the bigger trade. There is a casual player there who has fallen in love with the card ever since he read it the other day. Unfortunately he didn't have any trade stuff on him today otherwise it would have been gone. I will probably end up trading it to him for a $2 rare. By listening to what the people around you like and being supportive you can turn these throw-ins that people are dying to get out of their binder into a solid playable.

Join me again next week when I get back to talking about internet trading and especially how to use pricing sites to your advantage.

25 thoughts on “Techniques for Rebuilding Your Binder”