When a player makes a mistake in a game of Magic, or when they inadvertently break the rules, it’s often caught right away. When it is, it’s dealt with. Maybe a penalty is issued, but the mistake is taken back so it can be played legally. What happens when a player makes a mistake and it isn’t noticed right away? Is it really okay to let something that happened illegally stand? How far back should we go to fix a mistake? This is one of the questions from the PTQ a few weeks back that I promised to do a full write up on. 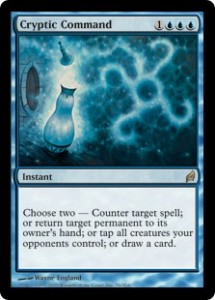 “Judge! My opponent tapped 6 lands and cast a Primeval Titan. I used Cryptic Command to counter it and draw a card. That resolved, and then she cast a Summoning Trap, looking at the top seven cards and put a second Primeval Titan into play. At this point I noticed that one of her 6 lands in play was a Terramorphic Expanse. So she didn’t have enough mana to cast the first Primeval Titan. What happens now?”

So we can all agree that you shouldn’t be able to cast a 6 mana spell with only 5 lands that produce mana. So we just take everything back, untap the lands and try again, right? The first thing I did when trying to figure this out was to ask them to break down the situation a little more. I wanted to make sure this was truly an accident.

The girl that played the Titan said that she played the Expanse the turn before, with the intention of cracking at the end if her opponents turn. She knew she had the 6th land and the Titan in her hand. When it came time to do so, she got a little excited about getting to cast her 6/6 and just ran it right out there, forgetting to fetch a land that can produce mana.

On the flip side, her opponent didn’t notice the misplay. He cast the Cryptic Command with almost as much confidence as she slapped down her Titan. Everyone knows the best Cryptic Commands are the ones that counter 6 drops on turn 6.

I was reasonably confident nothing shady was going on. Some players can get excited and overlook things. However, this doesn’t make it okay. So now that we know that nobody is getting thrown out over this, how do we fix it? 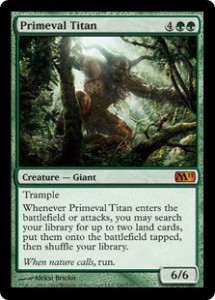 The Infraction Procedure Guide says that if this mistake was caught right away we can back up the game to the point right before the Titan was cast, untap her lands, and let them continue playing. However, this was not caught right away. There was a lot that happened in the game based on the fact that the Titan was cast. Cryptic Command wouldn’t have been cast if the Titan wasn’t. Summoning Trap would not have been sprung if the Command hadn’t been cast. There were cards drawn, cards looked at, lots of information gained on both sides of the table. Trying to back all of this up would have been a huge mess, and would have likely ended up with things not even 100% the way they were before.

Knowing all that, I choose to let the game state stand. Some players might think that this isn’t okay. She clearly cheated to get that Titan into play, why does she get to keep it now? While this is true, I made an effort to make sure that it was an accident, and it is her opponent’s responsibility to make sure she is playing legally just as much as it is hers. If he had noticed the Expanse right away than it would have been backed up and no harm would have come of it.

This does bring up an interesting question though. When exactly is it “too far” to back the game up. There really isn’t a hard set rule on this subject. It is really a judgment call. There are however, some guidelines that can be considered.

Generally speaking, the drawing of a card is too far. Because most Magic players have the tendency to flick the cards in their hand (I do it too), it is likely that the moment the card enters the hand you will not be able to identify it 100%. Now this doesn’t mean that drawing a card is automatically too far though. Say a player casts Day of Judgment with only one white source, destroying all creatures, and then just passes the turn. Their opponent draws a card and before they do anything else, they notice the mistake. At this point I am likely to back up. Put a card from player’s hand that just drew a card back on top of their library. Ideally the card drawn, but if you can’t know for sure, a random card from their hand. We would back up to the point right before the Day of Judgment was cast and let that player try something else.

The real breaking point for me is this. If significant decisions have been made based on a mistake like this it’s probably too far to back up. Cards were cast in response, and lots of things happened. Backing up all of that would have changed how both players played the rest of the game. One player would have to live in fear of every spell the cast being countered by the powerful Command. And the other player would have to make sure that the spell countered would count, knowing that a Trap was coming up afterwards. It could have changed the way both players played the game from that point on.

The bottom line is that the game of Magic is played by both players. It is both players responsibility to make sure it is being played by the rules and that all actions are taken legally. If your opponent doesn't have the right mana you should point it out to them. If you don’t, bringing it up later will likely not do you any good.

This falls under the category of Game Rules Violation in the Infraction Procedure Guide. A Game Rules Violation is kind of a catch all for this section of the IPG. Pretty much anything directly involved with an actual game that isn’t covered by another category is considered a GRV. Because it covers such a broad area of potential mistakes it is unreasonable to try to create a list of “fixes” for each and every situation that comes up. In order to remain consistent the emphasis is put strongly on the players to be responsible for what happens during a game. It is also said that we shouldn’t try to find any partial fixes to a situation. We shouldn’t try to compromise and come up with a solution that is fair to both players.

A fix needs to be all or nothing. Once you start to try to fix things you run the risk of favoring one player over another. It either needs to be backed up all the way, so the game can be played correctly, or not backed up at all. After all, it is the players themselves that didn’t notice the mistake in time. If it causes one of them the game, the best outcome may be that it would teach them a tough lesson in paying attention to what their opponents are doing.