"If" is a word that is used quite often. It is an important word in the English language, and is part of many philosophical discussions. The word "if" has its place in Magic as well. It shows up on many cards, usually as part of a Triggered Ability, or the condition for a Static Ability. But why is "if" so important?

Under normal circumstances, a Triggered Ability is independent from its source. Flametongue Kavu's ability "When Flametongue Kavu enters the battlefield, it deals 4 damage to target creature," once triggered, will resolve weather or not the Flametongue Kavu dies. Even if you kill the Kavu, the ability will be on the stack, and doesn't care if the Kavu remains in play, just if it came into play. 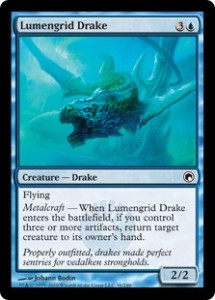 Now, lets look at a Limited favorite from the current block. Lumengrid Drake's ability says "When Lumengrid Drake enters the battlefield, if you control three or more artifacts, return target creature to its owner's hand." This triggered ability acts differently than the Kavu's. But before I explain how it works, lets look at what is different between the two abilities. They are both "enters the battlefield" triggers. They both will go on the stack, and both target a creature. The Drake however has those two little letters I mentioned earlier. The reason this is so important is a rule called the "intervening 'if' clause."

I know that this usually happens at the end of the article, but it seemed appropriate to use it here.

Taken straight from the Comprehensive Rules:

"A triggered ability may read "When/Whenever/At [trigger event], if [condition], [effect]." When the trigger event occurs, the ability checks whether the stated condition is true. The ability triggers only if it is; otherwise it does nothing. If the ability triggers, it checks the stated condition again as it resolves. If the condition isn't true at that time, the ability is removed from the stack and does nothing. Note that this mirrors the check for legal targets. This rule is referred to as the "intervening 'if' clause" rule."

That is pretty wordy, but hopefully by the end of this article it will make more sense. Now lets get back to our Drake.

Because of that little word, if the Drake's ability is on the stack and your opponent Crushed one of your three artifacts you would not longer meet the necessary condition. When the ability went to resolve, if you didn't do anything else, it would be removed from the stack and do nothing. Now, if you could somehow flash a new artifact into play the ability would resolve as normal. It doesn't care what three artifacts it is, or if the condition was not true at some point between triggering and resolving. As long as there are three artifacts when it triggers and three when it resolves you will get your full effect from the Drake entering play.

So that's interesting enough for a card that might see some play in limited. What about a card someone might actually play. Well, there happens to be a fairly popular card in Standard, and even in Extended that has this dreaded clause built in... 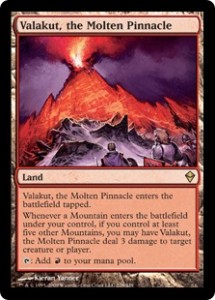 "Judge! I have a question. If I have a Valakut, the Molten Pinnacle in play and I play my 6th Mountain, the ability will trigger and I'll do 3 damage to my opponent. He used his Lavaball Trap on two of my Mountains and says now my ability doesn't work. Is that true?"

Ah yes, everyone's favorite new red land has everyone's least favorite two letter word in the middle of it's ability. Yes, this is true, as long as they shoot a Mountain that was already in play. If you no longer have five OTHER Mountains in play when Valakut's ability goes to resolve you will not get your three damage. If you have multiple Valakut's (and really, who doesn't) and exactly five other Mountains, one instant speed land removal spell can ruin your whole day. Even worse, if you used your Primeval Titan to fetch up Mountains five and six, with a playset of Molten Pinnacles in play... You can see where I'm going with this. Unfortunately, destroying the Valakut's themselves will have no effect once the abilities are triggered. So don't get any funny ideas with your Tectonic Edges.

As Always, Keeping it Fun,

PS In case you were wondering, putting Mountains five and six into play at the same time with Primeval Titan's ability will trigger a Valakut twice. The ability counts the other Mountain that came into play as one of the other five it needs.

2 thoughts on “Intervening “If””