This week I have another situation that came up at Grand Prix Denver. It was a call that I personally took, and it was pretty interesting. Let’s get right into it: 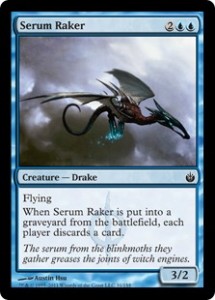 “Judge! I (Player A) had a Serum Raker in play. It had just gone to the graveyard from blocking a creature. I was recording Life totals before triggering his ability, and when I looked back up my opponent (Player B)had already played a Bladed Pinions. So this is a Missed Trigger, and now the trigger needs to go on the stack on top of his Bladed Pinions.”

Player A was very insistent on this penalty right out of the gate. I discovered right away that his opponent only had one other card in his hand. This player clearly wanted to make sure to get that other card out of his hand and not give his opponent a choice in the matter. But was this really the right call?

I started to investigate to see what exactly had happened. I asked Player B and he explained to me that he didn’t realize that his opponent’s creature had an ability on it, and just assumed after everything went to the graveyard he was free to move on to the next phase and start casting spells. This is a perfectly reasonable assumption to make. That had been the way things went the whole match so far, and if this creature hadn't had a triggered ability it wouldn’t have been a problem.

When I turned back to Player A to see what he thought, he told me that after creatures dealt damage in combat, he put his creatures in the Graveyard and reached for his score pad to adjust his life total from the attack before dealing with the triggered ability on his Raker. When he looked up his opponent had already cast a spell, which is when he called for a Judge.

This was the first thing that jumped out at me as strange. Usually, in my experience, a player makes sure all his triggers are handled and everything is taken care of before he changes his life total. However, after thinking about it, the way he went about it is technically correct. Very technically correct, in fact, as that is the way it would have happened on Magic Online.

Player A also wanted to clarify that in the current game state the Bladed Pinions was still on the stack. He was pushing really hard to make sure I knew we were definitely no longer in the attack phase. He really, really wanted that last card out of his opponent’s hand.

So now that we know that both players agree about what physically happened, we needed to figure out what to do so the game can go on.

It seemed pretty clear to me that one player (A) thought we were still in the combat step, readied for his trigger to go on the stack. The other player (B) thought they were already in the main phase, so much so that he had already cast a spell. Knowing this discrepancy, we needed to be backing things up to the point of confusion.

In order to do this, the IPG tells us that we needed to consult the Head Judge in order to do this. At a Grand Prix, this task is often delegated to any Judge level 3 or higher. So I found the closest level 3 and we had a brief discussion.

There was an understood shortcut that was created between these players by the way they had played the match up to this point. That shortcut was that once damage was dealt, and creatures went to the graveyard, it was time to move on to the main phase. When you have a shortcut that exists, and suddenly it needs to change, sometimes a player doesn’t mention it right away. When this happens, it falls under the category of a Player Communication Violation.

After getting approval from the level 3 Judge, I returned to the match. Much to the dismay of Player A, I ruled to back-up the game state to the point of confusion, putting the Bladed Pinions back into Player B’s hand. I issued the Warning for Player Communication Violation to Player A for not being clear about his trigger and we put the trigger on the stack at the appropriate time.

The biggest reason for this, in my opinion, not being a Missed Trigger is that the player who had control of the trigger hadn’t missed it yet. In his mind the game had not yet reached the point where the trigger would go on the stack. The other player simply didn’t realize it was going to happen and tried to move on. Since one player was still in his end of combat step, and the other was in his Second Main Phase, I believe putting them both on the same page was the only way to go.

Triggered Abilities are special abilities that rather than get activated, they “trigger” on a specific event. When that event happens, the ability goes on the stack before the next time a player would receive priority. This happens after State Based Actions are checked.

If multiple Triggers happen during the same period of time between players receiving priority, they will all be put on to the stack in what is called Active Player, Non-Active Player order (APNAP). The Active player (the player whose turn it is) will choose the order that his or her triggered abilities will go on the stack first. Then, each other player in turn order will put their abilities on the stack in the order they choose.

The abilities will then resolve as normal, in the opposite order they were put on the stack. Under normal circumstances the Non-Active Player’s triggered abilities will always resolve first.

6 thoughts on “A Missed Trigger?”