Most players of the game have things that they collect that are a subset of the game itself. Perhaps your lofty goal is to have one of every card ever printed. Maybe you just want one of every Goblin. Judge foils. Italian Legends. Summer Magic. Or maybe, like Dr. Jeebus, you want to have one playset of every card with Rebecca Guay art on it, who am I to judge? In truth, this is a collectible card game that we play, and it hasn't lasted this long by failing to tap into that desire to hunt, to possess, and to complete that drives most any collector.

As for me, I don't have a card collection to speak of. Up until now I've dallied in assembling complete sets, but dropped that pursuit in lieu of a goal more tied with my ambitions, and that is to own every single preconstructed deck released. Hey, I review 'em for Ertai's Lament, so I might almost consider it a professional expense. However, in terms of an actual card collection, I've not really given it much thought.

As I've aged I've more and more found the idea of autographs to be a bit... silly. Rather than fawning over the scrawled signature of some celebrity, why not go out yourself and do something worthwhile? Still, I've never been quite able to shake the attraction of a time/place memento, a keepsake to remember that you were there, or this meant something to me, and autographs fit the bill as good as any. So I'll be beginning my collection of autographed Magic cards(foil wherever possible) but with a slight twist, as inspired by two recent events.

I began Ertai's Lament in June of 2010 with little more than a few starting decks (the Duels of the Planeswalkers ones), a WordPress account and a masochistic curiosity as to how long I could maintain a pace of a new review every other day. I knew that I loved Magic and had grown increasingly devoted to the preconstructed scene, but really had little idea of how much of an audience there was out there for something devoted wholly to the topic. So in some ways I was as surprised as anyone when I crossed the three-month mark at full steam, a threshold a great many start-up blogs fail to cross. To commemorate the event, I decided to stage a massive giveaway. I'd held a couple small-scale ones before (an Archenemy deck here, booster packs there), but for this one I enlisted the generous aid of my local gaming store, Moonlite Comics.

Moonlite came through in a big way, offering up scads of foil and promo cards, a pack of rare "Euro lands," and even an Infest playmat. Given the abundance of riches before me, I had enough to divide the prizes into three piles a la Fact or Fiction, allowing each winner in turn to pick their preference from what remained. One of the Magic community's more prominent personages, Chewie (of The Mana Pool fame) ended up with the "Playmat Package" which contained not only the playmat, but nearly a dozen foil cards including Emrakul, the Aeons Torn and Sun Titan. Score! I shipped off his gear and that was that. Or so I thought...

As it happens, I've since organised a number of giveaways in recent months. I usually try and do one about once a quarter, but somehow the conditions ripened to deliver a flood of them. First there was the Mirromancy giveaway. Then we had the foil Elspeth/Fauna Shaman giveaway. Shortly after came the Quiet Spec 'Second Chance for a Prerelease' contest. Next was the 'Send Jay Boosh to Toronto' raffle. Now we've got the Coldsnap Beyond the Grave comment lottery. One thing's for certain, it's a great time to be a reader!

So perhaps I managed to store up a smidgen of good karma, because last week I was the grand prize winner of the giveaway drawing staged by the Mana Pool podcast. They had a stack of sealed product and some accompanying playmats, with the winners getting to select one of each in the order chosen. Not only that, but they'd sign the playmats to boot, creating a nice commemorative keepsake. Impossible not to notice amongst the playmats was this stylish number: 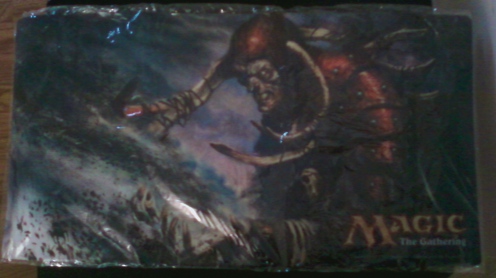 Now where had I seen that before?

I actually thought long and hard about taking it back. Although I could scarcely abide the art (much too pretty for my tastes), getting it returned to me half a year later (and signed no less) had a certain poetic quality to it, like some cursed magic item that shows back up in your rucksack even after you throw it from a cliff. In the end I resisted, deciding it simply too good-looking to deny another and instead selected the much more drab and mundane Battlegrace Angel one. My loss, of course, but I hope the new owner appreciates owning not just an attractive playmat, but a piece of history.

Or at least an amusing tale.

It's the last weekend in February. A slow day at home and the baby's asleep, so I decide to carve out a few minutes for myself and check out the coverage from SCG Live for the Star City Open in Washington DC. As luck has it, there's a familiar face starting up a feature match- Jonathan Medina. My enjoyment of the match turns to horror as he punts the game away with a misplayed Destructive Force. One of the chat-room trolls proclaims that Medina "looks like the kind of person I'd stab in the parking lot," and I disgustedly realise that there's at least a dozen better uses for my time.

Jonathan is nothing if not a great sport, though, and shortly after as I'm organising the Quiet Speculation 'Second Change for a Prerelease' giveaway, I decide he'd be perfect for a judge's spot on the panel. In my email, I even half-jokingly suggest that he consider donating a signed foil Destructive Force to the prize pool, the perfect commemorative keepsake for the moment. Jonathan went on to one-up me, and pulled one of the D-Force's from the actual deck he played, a card which is at the time you read this en route to a soldier stationed in Afghanistan, the winner of the Second Chance. 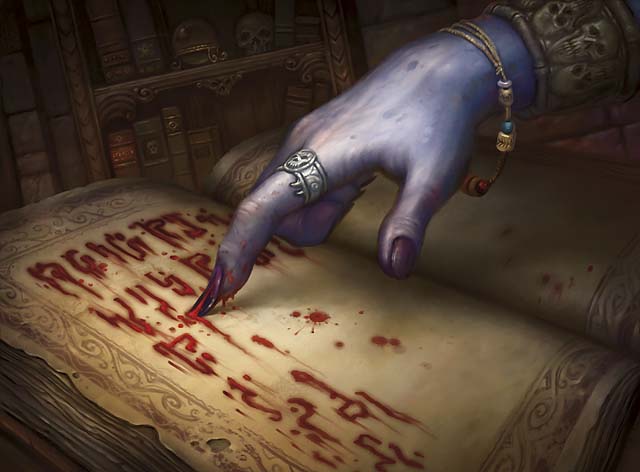 So put them together and what do you have? Autographed, foil cards that tell a tale of sorrow or mirth, adventure or accomplishment, or have some sort of resonance with the individual being handed a Sharpie and shiny cardboard. It's enough to get me started!

Why not begin by aiming high? When the Colossus was spoiled, the Twitterverse erupted with howls of protest (as well as the occasional squeal of delight). In part because of his stature amongst the Magic community, Chapin's voice was one of the loudest, and he aimed it right at Wizards directly. Peppering the likes of Mark Rosewater and Aaron Forsythe with protestations and perturbations, the usually-upbeat Chapin morosely proclaimed "some of my innocence is gone" before at last concluding "I feel like part of me died." I have no idea what sort of reaction I'd get handing "The Innovator" a marker and a BSC, but I'm willing to bet it'd be memorable.

The D-Force had it's moment in the sun above, but not to be overlooked is the Bear Umbra- the card that virtually put Medina on the map and made him a fixture in the Magic community. Hard to imagine it was nearly a year ago, but in his famous "Pack to Power" quest Medina went from a single booster of Rise of the Eldrazi, trading up in true One Red Paperclip style until he'd gotten his hands on a Mox Pearl.

A fixture on one of the best podcasts in the game right now, The Eh? Team, Smi77y is eternally being roasted for his missteps along his path towards becoming a top-flight deckbuilder. Whether it be his assertion that "[card Koth of the Hammer]Koth[/card] is better than [card Jace, the Mind Sculptor]Jace[/card]," or building a competitive deck around Mul Daya Channelers, none has had the enduring legacy that his championing of the Ka-KAW Phoenix. Now something of an Eh? Team catchphrase, this is the perfect embodiment of Smi77y's relentless perseverance and optimism blended with the occasional tactical misplay. Illegitimi non carborundum!

In my 'younger days,' I was attracted to internet message boards where antagonism and wit were the coins of the realm. Beginning with the Jim Rome "Trollboard" and ending with the Old Firm Fans Forum "Slagging Match," I've known many a Jeebus- the acerbic wit which has an uncanny knack for provoking responses from others. Have a look at the comments section for most any of his Quiet Spec pieces and you'll find the Doc with a long-ladled spoon, stirring things up. Chip Hitler, this one's for you.

Chewie and the Dorks (The Mana Pool): Infest

Because if I can't bring myself to take back the playmat, the next best thing is obvious! And finally...

Hey, I've gotta start out with something easy, right?

And in that vein, which Magic personalities would you want to put pen to paper... and what would you have them sign?

10 thoughts on “Autographs: My Next Level Collection”