Recently, I had a reader send me an email. He had a series of questions about a fun card for a Legacy deck with a lot of potential.  Sneak Attack can make some explosive things happen, and this reader wanted to know about some ideas that he had. 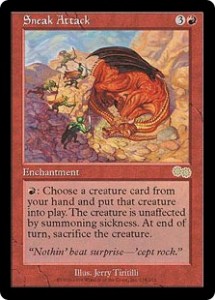 (Judge!) After playing Sneak Attack, can I play Yawgmoth's Will and use the Sneak Attack to put creatures from my graveyard into the battlefield?

Yawgmoth's Will is a very powerful card. It allows you to play all the cards in your graveyard as if they were in your hand. However, those cards are not actually in your hand. So those cards cannot be snuck into play.

(Judge!) What happens if I use Sneak Attack to put a Viashino Sandstalker on the battlefield? At the end of the turn it is sacrificed or does it comes back to my hand?

Both the Sneak Attack trigger and the Viashino trigger happen at the start of your end step. So you would get to choose the order that they are put onto the stack. They would then resolve in the opposite order. Long story short, you would get to decide if the creature gets sacrificed or returns to your hand.

(Judge!) If I use Sneak Attack to play a Thopter Assembly at the beginning of my upkeep does the Thopter go back to my hand and I get 5 1/1 Thopter artifact creature tokens with flying?

Thopter Assembly triggers at the beginning of your upkeep. The first opportunity you have to sneak it into play would be after this trigger would go off. There is no way to make this happen by sneaking the assembly into play during your upkeep. (See BONUS RULES STUFF for more info on this)

(Judge!) What happens if I use Sneak Attack to put a creature on the battlefield during my opponent’s turn and he uses Control Magic on it? Does it still get sacrificed? What if I Disenchant the Control Magic in the same turn?

A side note: the delayed trigger will only happen once. If you regain control in a later turn that creature will remain in play.

Unfortunately, the name of Sneak Attack lends itself to this idea. Since there are other cards that have this type of effect, you might think that Sneak Attack would put attacking creatures into play, but it doesn’t. The last opportunity you would have to put a creature into play on your turn and still attack with it is the Declare Attackers Step in your Combat Phase, before you declare your attackers.

(Judge!) If I announce I’m using Sneak Attack to sneak a creature, it is possible to use some spell with split second that prevents me from actually doing it?

However, it only stops a single activation. Since you don’t announce which creature your Sneaking into play until the ability resolves, the only thing you really lose in this exchange is one red mana. You can Sneak another creature into play right after the Trickbind resolves with no problems.

(Judge!) Do you have any suggestions of creatures to use with Sneak Attack to have fun effects and play fun games? I don’t use Emrakul, the Aeons Torn because it makes every game the same boring game.

This one I’m not so good at. Building decks has never been one of my strong points in magic. If you’re reading this and have some suggestions, please leave a comment with some awesome creature ideas. Maybe a cool combo you can think of. This is for a Legacy deck, so pretty much anything goes. 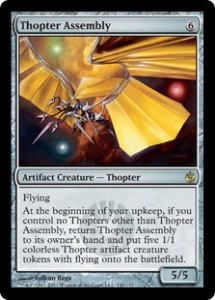 “At end of turn” triggers are interesting. They sound like they should happen at the very end of your turn, and they do... sort of.

This is a neat trick within the rules that would allow you to get your Thopter Assembly's tokens. If you Snuck the Thopter Assembly into play during your opponent's end step, it would stick around during the beginning of your upkeep and trigger as normal.

There are a lot of cards that use this wording that can take advantage of this rule. The unearth mechanic uses this wording, as do Elemental Mastery, Incandescent Soulstoke, and Kiki-Jiki, Mirror Breaker.

Can you think of any other cards?