Wow, what an exciting and widely diverse top 8!

Yeah, that was what I was hoping to write for my intro, but when you gt 4 UW caw-blade decks and 4 RUG decks, you just want to wonder if its really come down to this. By "this" I mean 32 copies of Jace in a top 8, and 3 copies of Guideon in each caw blade deck. I'm half surprised the commentators didn't fall asleep during the matches, because it was painfully obvious just how boring those matches were. 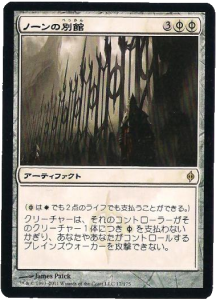 It's not just that this was an overall boring GP, it was a boring time for us investors. The biggest news of the weekend? Inquisition of Kozilek was thought to be popular, and there were 10 copies of Precursor Golem in the top 8, a card pretty much regarded as terrible, so at least it will see a small yet temporary upswing in price.

So what did the GP mean? In all reality, nothing. Jace continues to be the powerhouse player, cawblade continues to put players into the top 8 of events, and RUG is still undergoing evolution and is in a decent position to fight almost anything. This is what you would call a slow week in the financial world, so I'm going to focus my attention on another area for this week; the current cries on twitter of #banjace.

Almost every notable magic personality and an uncountable number of other magic related twitter people have all weighed in on the situations. We've heard every argument for and against the issue, ranging from people asking when the last time every deck played found copies of Bitterblossom and Bloodbraid Elf to Skullclamp, and it even got the "compared to Survival of the Fittest argument. So here's my opinion on the subject.

Stop. Just stop with all of the "end of the world" cries over Jace, stop with the torch and pitch form burn the witch attitude.

Jace is a powerful card, there is no doubt about it, but it doesn't win the game on its own. It must be protected over a number of turns, and in this environment its very possible to just have your opponent play one of their own and kill it. With the other cards mentioned above there could be multiple in play at the same time. Jace has answers, start playing them. He won't be banned, and people will learn to adapt and play decks that beat him, or they will jump on the band wagon themselves. Now that that is out of the way, lets look at some possible investments.

Phyrexian mana symbols making it so you can pay life points instead of colored mana makes things very interesting. There are a number of cards that may not seem that great and may be brushed aside at first. 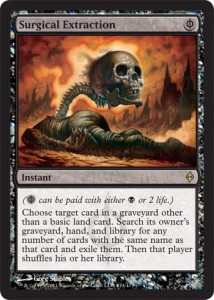 The first card that I know is going to be popular is Surgical Extraction. For 2 life or 1 black mana at instant speed you can choose target card in a graveyard other than a basic land. Search it's owners graveyard, hand, and library for any number of cards with the same name as that card and exile them. Then that player shuffles his or her library.

Want an answer to Jace? Here you are. Turn 1 duress, take Jace, pay 2 life, remove them all at instant speed. Star city currently has them listed at $12.49, which I think is about right. It may be worth more since you can put it in any deck that's willing to pay 2 life to cast it. Aggro decks with access to an instant speed card like this? Sounds good to me. Kill the first Jace and stop the rest? Personally I love this card and wouldn't be surprised at all to see it go higher as soon as people stop seeing it as a black card, and as the colorless powerhouse it is.

Reason: Besides the reasons above, this has all of the qualifications of a card that will be used in legacy. Stoneforge Mystic continues to climb, and what deck wouldn't love to pull out every force of will from an opponents deck after they use the first/discard the first.

The next card I want to look at is Hex Parasite. A simple 1/1 artifact creature for 1 colorless, you may pay X and black or 2 life (I really love phyrexian mana) and Target a permanent. Remove up to X counters from that permanent. Hex Parasite gains +1/+0 until end of turn for each counter removed this way. 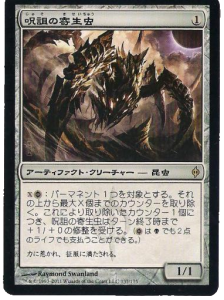 Where as surgical extraction is a graveyard based solve-all, this is a planeswalker targeted killing machine. Even if you get one use out of it, will be very worth it. Currently you're looking at $5 on SCG to buy one. I would consider getting your set at that price, if only because not only does it take out planeswalkers, but it could easily be used in legacy as an answer to a turn 1 Aether Vial. It also has the makings of a Legacy inclusion, and I know decks like the goblin welder deck we told you about not long ago will find use for this.

Reason: Initial demand from the #banjace people will make this a high demand card. You can probably trade it off for $12 the first few weeks if you spin its use as a jace killer correctly. To the right people, that's worth $12+. It's possible use in legacy also helps, and is another rare from the set to keep watch of.

To wrap up this week I want to look at Norn's Annex. This is a seemingly simple card, but the ability to pay 3 and 4 life to prevent creatures from attacking you or planeswalkers you control unless they are willing to pay 2 life or 1 white per attacker shouldn't be underestimated. While this is nothing new, as cards like Propaganda and Ghostly Prison have been around for a while, I believe this card has the possibility to be put to some use in the following months. I wouldn't pick up many of them, and I would try to get them as throw-in's on other trades, but it's worth having a few of them just in case.

That's about it for this week, hopefully next week gives us an Open worth talking about or some undervalued card I can suggest you go buy before it explodes.