The Basics of Competitive Commander Decks

To win, however, you want to build a Commander deck that follow several rules, not templates, that make them powerful and consistent. What are these rules? I'm glad I asked myself.

A great deck eschewes staples for cards that help abuse the General. The General is the reason why you're playing Commander (instead of 100-card Singleton) and a great deck maximises the recusive, tutorable effect the General presents. There are, truly, only two cards that go in every well-built Commander deck: Senseis Divining Top and Sol Ring. Everything, everything, else is up for grabs. [card Zur the Enchanter]Zur[/card] is a great example: he has no need for more than three creatures but will generally have 20-30+ enchantments, unlike any other deck. Each card serves the General, and it is the centerpiece of the deck.

The most boring Commander decks use the General as a color-setter and not much else. For example decks that use Teneb, the Harvester as the General for the access to Black, Green and White, without any thought to what creatures are could be brought back and why.

A powerful Commander deck enters the game with a plan, either that be to apply pressure, to deny resources, to outpace the competition with card advantage, etc. Yes, part of the craziness of Commander is the wild, unexpected interactions, but without a gameplan a deck is more often bound for failure than success. For example, [card Erayo Soratami Ascendant]Erayo[/card] simply wants to set up the "Erayo Flip" as quickly as possible. Rafiq of the Many wants to win through General damage. Sliver Overlord wants to win in the Red Zone by landing and protecting the most relevant Slivers possible. The cards in the deck want to help facilitate these plans without unnecessary distractions.

3. Seven by Nine, All the Time

General theory of deckbuilding posits that a well built 60-card deck maximizes 4-ofs in order to ensure you maximize your opportunity of drawing the cards you need to win. In a singleton format, drawing four-of anything is impossible. However, the beauty of Magic is that the number of functional reprints or similar cards that allows you to play a metaphorical four-of in any deck. However, in a 100 card format, the maths is such that you need to run seven cards of the same functionality in order to meet the "four-of" rule. Therefore you end up with the seven-of rule, providing for nine types of consitent functionality in your deck. You can dedicate these nine slots in general (ie. "removal") or specifically (ie. "Spot Removal", "Mass Removal", depending on how technical you want to get. Nine slots of seven cards is 63 cards, allowing 36 or 37 lands, depending on how you account for your General.

Another way to 'duplicate' cards in your deck is to run tutors and card draw. In a competitive scenario, tutors are a must and I would generally dedicate a full functionality slot to tutors of some form or another. In casual formats, a high level of tutors tend to get frowned upon, though I would say this; next time some mid-rangey player calls you out for running [card Demonic Tutor]Demonic[/card], [card Vampiric Tutor]Vampiric[/card] and Grim Tutor, asked to take a look at their deck. If they're running Cultivate, Kodama's Reach, and Explosive Vegetation, ask why they're running so many land tutors. Prepare for a "it's not the same" type argument in response, but in a deck that wants to ramp out the bombs, those land tutors are just as powerful as any Vampiric Tutor.

A few weeks ago it was Common Week on the Mothership. After watching various other twittererers discussing the fun they were having building pauper Commander decks, I thought I'd give it a try. Although monogreen is probably the most consistently powerful pauper Commander colour, I decided to go with U/B and the general Ramirez DePietro. When building the deck I tried to follow the rules above.

1. Serve The General: DePietro is, funnily enough, one of the more aggressive generals. This deck tries to keep the path clear for Ramirez by running a stack of removal in order to clear a path for the flamboyant Pirate. In order to keep the removal coming, the deck also runs a metric tonne of card draw; in fact, it's capable of drawing itself out in no time.

2. Know your Plan: The deck wants to out-strip the opponents through the resources attrition war to allow DePietro, or the other big critters in the deck, to win in the Red Zone. The deck has an incredible draw rate, high level for 2-for-1 removal, plus both great recursion engine (through Tortured Existence) and value engine (through Escape Routes) for winning the long game. This is also why the deck runs no counter-spells; it wants to use it's mana aggressively and win the attrition war long-term, rather than attempt to control the game early.

3. Seven by Nine, All the Time: The deck dedicates four functionality slots to card draw, two to removal, one to ramp, and one to creature finishes. The final slot is a "utility" slot, which you might call, if you were incredibly rude, my cheat-slot for cards I could't fit into any other slot. But you're not that rude.

4. Search and Destroy: There's very few land-tutors in the deck, but the sheer weight of card draw in the deck makes up for it, as you'll never miss a land drop. The four draw slots means the deck can draw out of any difficult situation. Fishbowling the deck showed it could easily draw 10 cards a turn if it wants to. Plus it runs Mystical Teachings, a primary reason for playing U/B in pauper. 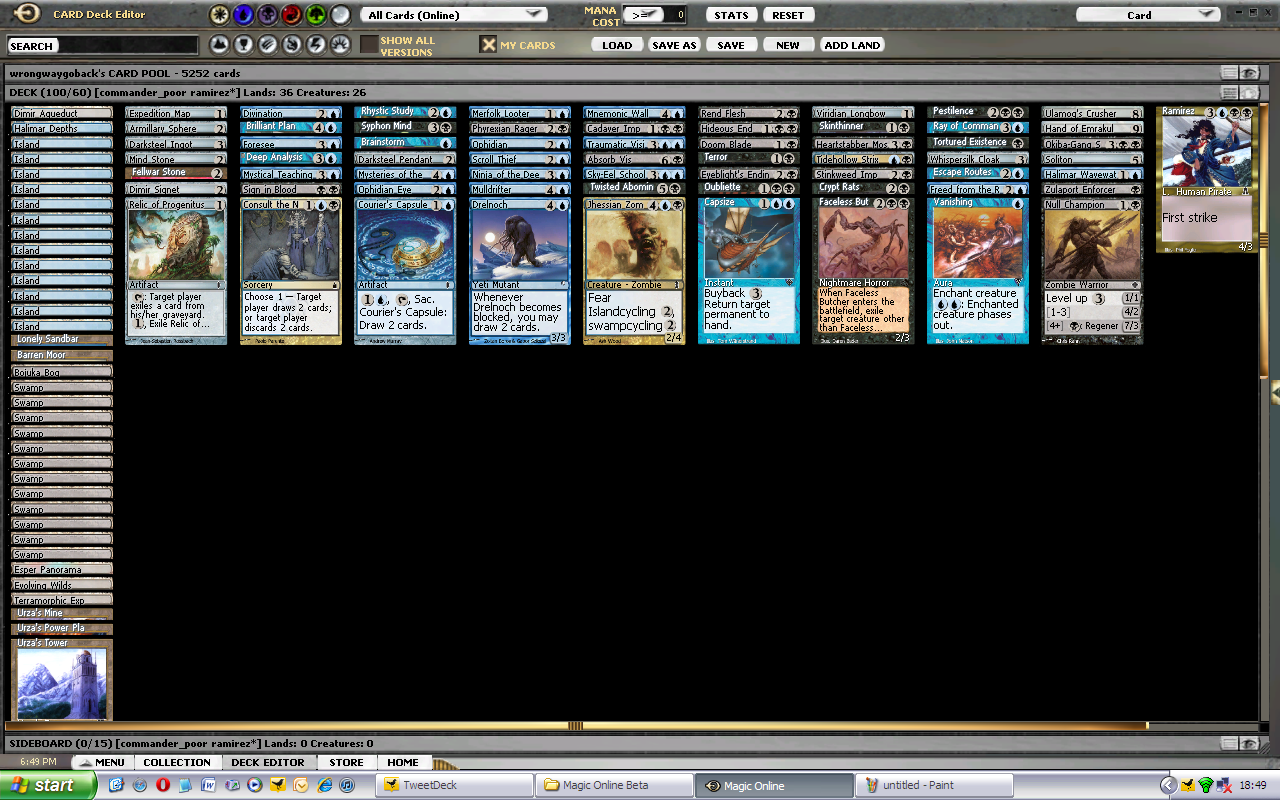 The deck is a bunch of fun to play. There's a lot of little interactions to be aware of:

DePietro DePauper is my first foray into pauper Commander deck building, but I have to say I kinda like it. Being able to munch with some of the only mass removal in the format (Pestilence and Crypt Rats) makes me smile. As I mentioned, I suspect monogreen ramp is the strongest archtype in Pauper, but I'm sure this would give it a run for it's money. If you have any suggestions on how to improve it, or ever take it for a spin, let me know.