For those of you who have been enjoying the Precon Deck Buyer's Guide, have no fear- we'll be continuing the series next week. But with New Phyrexia hitting the shelves, I'd like to get this out today for the benefit of those considering purchasing one (or more) of the decks. We'll resume the Buyer's Guide articles next week.

Welcome to the official first Magic Beyond the Box piece for New Phyrexia, and what a road it's been. After being wrapped in a secretive cocoon, full of fakeouts and speculations and even a specially-altered Game Day promo, to a mixture of shock and titillation we found the entire set spoiled with the leaking of a "godbook." Even the Intro Decks were not immune, themselves being spoiled on MTG Salvation shortly before prerelease. For those who enjoy the slow-roll deployment of spoilers for a new set (and I'm assuredly one of them), it was a very disappointing outcome.

On the upside, the absence of a real spoiler season is about the only disappointing thing about New Phyrexia. By now you've likely attended a prerelease or had a chance to pore through the visual spoiler, and pored through all the goodies this set has brought us. Today we'll be looking at the Intro Pack decks, and discoering what 'goodies' lie in store for us there, as well. There have been some changes to the format of the decks this time around, one of them in particular has caused no shortage of controversy.

When looking at the New Phyrexia intro decks, here are four things that stand out, followed by details of our latest giveaway!

In my feature on the Five Elements of the Best Theme Decks, I highlighted the challenge to the sense of identity a particular deck can have posed by its dilution with Core Set filler. There I contrasted Zendikar's filler content (around 33%) with Scars of Mirrodin (a much more gratifying 9%). This was a huge reduction, not least because as the first set of a block, Scars had less tools at its disposal than its expansions would, and more motive to reach outside its own borders.

Mirrodin Besieged reversed the trend somewhat, jumping to over 15% filler content, but New Phyrexia has reined itself in at just over 11%. Furthermore, New Phyrexia seems to have reassessed the very concept of 'filler' and found it in need of improvement. In the recent past we've seen inclusions that have stood out like a sore thumb. Deadspread contained a couple of [card Maritime Guard]Maritime Guards[/card] and a Harbor Serpent. The best that Phyrexian Poison could do for removal was a pair of [card Assassinate]Assassinates[/card]. While Doom Inevitable trundled along with a Barony Vampire and Mirromancy packed in an impressive ten cards from Magic 2011, Mirrodin Besieged started to show what was possible with a more thoughtful approach towards integrating Core Set cards with the themes and aims of the decks. New Phyrexia has really brought that fusion home in an exciting way.

Are they perfect? No. But you can see the thought process behind the inclusion of Mighty Leap in Artful Destruction, for instance: if you have the Precursor Golem out, giving your Golem Army a power-and-toughness boost and flying can close out games on the spot. In the same deck you'll find a Stone Golem and Garruk's Packleader. The latter in particular shows the triumph of strategy over theme: it's an exceptionally powerful card in this deck given its abundance of 3/3 Golem token generation via the Splicers.

It continues on through the other decks. Devouring Skies, the flying/equipment deck, carries a pair of [card Augury Owl]Augury Owls[/card]. Amongst the ways to kill your own critters for fun and profit in Feast of Flesh is Fling, and Life for Death brings a Lightning Bolt and a Solemn Offering.

In short, Core Set contributions to the decks seem to have a greater deal of synergy with the decks themselves, rather than just stuffed in in a seemingly arbitrary fashion. Scars block has been trending away from Zendikar block in a most pleasing direction, and it's good to see that even within the block improvements continue to be made. 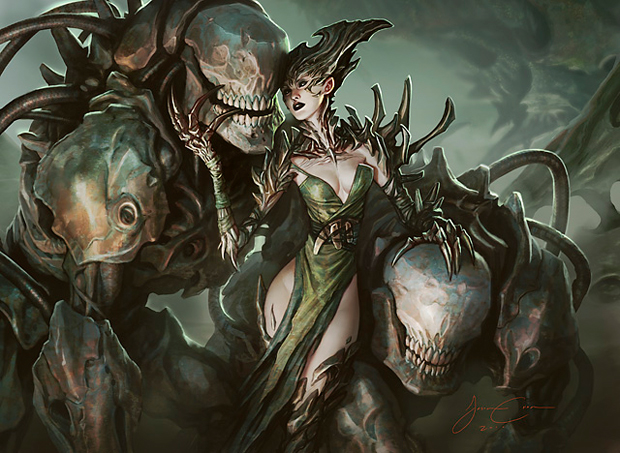 Again, I've written before how the Scars block decks feel like they are moving back towards their theme deck roots, and the New Phyrexia decks follow this most welcome path. Intro Decks in previous blocks (Zendikar especially, but to some degree Alara block as well) seemed to have a higher amount of cards that didn't support the overall aims of the deck. This is in part deliberate. One of the roles of intro decks is to nudge novice players to tinker with and improve their deck. This explains the prominence of the Goblin Piker, for example.

Theme decks, if they had this goal in mind, were much more subtle about it. The themes of each deck tended to be the primary consideration going into their design. New Phyrexia returns to that feel. Artful Destruction has a very strong synergy and cohesion based around the assembling of a Golem army, much as Ally and Sliver decks build around other similar cards in the deck. Life for Death not only has a very hefty contingent of Phyrexian mana spells to give you a good feel for the mechanic, but it also comes packed with a strong core of lifegain spells to help you get some of that resource back!

The most contentious news regarding the intro decks of New Phyrexia was this surprising tidbit. Rather than contain two rares from the latest set, each deck would only contain one new rare (which would be the foil premium card). The second rare would be from an earlier set in the block. Reaction has been largely negative for understandable reasons: players are excited about the new set, and prefer to play with new cards rather than ones they've seen already (and may very well own).

I understand this perspective, but I respectfully disagree with it. Let's take a look at each of the non-NPH rares in the intro decks.

Artful Destruction -- The 'Golem Army' deck, what better rare to take the second slot than Precursor Golem? Don't let the premium rare Blade Splicer fool you as there is no Green equivalent at that rarity.

Devouring Skies -- The aforementioned flying/equipment deck has a welcome home for Argentum Armor. Having its second rare be equipment makes a lot of sense, considering that this deck packs in nine other pieces of it. But what other options were there? The Lashwrithe looks like a natural contender, until you're reminded that Wizards doesn't like to mix mechanics in their intro decks (Phyrexian mana has its due elsewhere). [card Bonehoard]Bonehoard's[/card] already been featured in Doom Inevitable. Darksteel Plate is novel, but not aggressive enough. Livewire Lash? Maybe, but it's more optimal in a deck with a lot more combat tricks so that you can force the bonus effect. Nim Deathmantle? Strata Scythe? Both of those don't answer the concern about which set they came from, and besides, a nice fat piece of equipment like the Argentum Armor is a good one to use when you're running [card Brass Squire]Brass Squires[/card].

Feast of Flesh -- The exception that proves the rule, I suppose. Granted this deck is packed with very diverse burn and removal, but even that premise isn't enough to justify the inclusion of the absolutely dreadful Tower of Calamities in a deck with no ramping options. A terrible pick.

Life for Death -- This deck capitalizes on Phyrexian mana to flood the board with cheaper creatures and effects. The downside, however, is that you're using up your life total to do so, leaving yourself vulnerable to your opponent. There may be other solid options to include here, but a board-sweeper like Phyrexian Rebirth is hard to argue against. The card can win games all by itself, and at the very least can hit the reset button and buy the Life for Death pilot more time to draw some lifegain.

Ravaging Swarm -- Another less exciting option, this deck runs Inexorable Tide in hoping to use proliferate to finish what its infect creatures started. It's solid and dependable, but not the sexiest option around. Still, the block is filled with role-playing blue rares that have an application a bit too narrow for an intro deck. Dissipation Field? Distant Memories? Mitotic Manipulation? Xenograft?

Although the disappointment at not getting two New Phyrexia rares is understandable, I think looking at the overall picture it's in many ways a step forward rather than a step back. If the wish is to have intro decks that play more cohesively, that is more like theme decks, then giving them a wider pool of cards to build from can only be a good thing.

I'm very excited about the trends I've witnessed throughout the course of Scars block, and am looking forward to seeing them continue in Innistrad this Autumn. Wizards has redeemed themselves from the disaster that was Zendikar block, and as these three observations illustrate we're continuing to move towards improved intro decks. Long may it last! 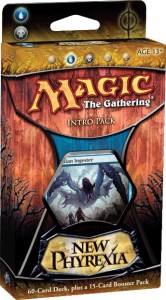 And finally... a giveaway!

Want to win a copy of the new Devouring Skies Intro Pack this week? Quiet Speculation has an extra one lying about and we're looking to find it a good home! We'll be having another random drawing to pick a winner, and there are two ways to get your name in the hat!

1. Retweet the official contest tweet that will be going out on Thursday, 12 May after this column goes life. It'll be under my Twitter account (@ErtaisLament). Retweeting this will get you one entry into the hat!

2. Leave a comment below with your thoughts on the New Phyrexia intro decks. Let us know what you think of them, or how you feel about the new rare policy. Has one deck in particular caught your eye? Leave a comment, and you'll get your name in the hat a second time!

Then, on Wednesday 20 May we'll be drawing a name from the hat, and the winner will be announced in the following week's Magic Beyond the Box.

38 thoughts on “The Intro Decks of New Phyrexia”