Dye a Tribe Unfun: How To Wreck Competitive Drafts

What do you do when you open your first booster in M12 draft?

I’d bet that most people out there do the same thing as I do: look at the cards, pick the best card, figure out what will probably table, then pass it to the left.

What do you think you will do when you open an Innistrad booster in draft?

Are you going to look to your right and try and see which double-faced card the person feeding you opened and if he takes it? He doesn’t have to tell you, but it’s open information and you can’t get in trouble for trying to find out what it is.

Hell, you might as well take a peek at the rest of the pack. Wizards gave you the perfect excuse if you’re caught.

What are you going to do next? Look at the person to his right?

You haven’t even looked at your own pack yet!

Okay, you’ve looked at your pack and figured out what the best card is.

Is it the best card? Are you sure?

What’s taking him so long?

Oh, he’s just waiting for the next person to take his pick. Can you blame him? There’s a huge advantage in knowing what color your draft partners are in.

On the flip side, should you even take that double-faced bomb? If the other drafters see it, good luck getting any decent late picks.

Hate drafting has a much higher EV when you know you’re actually affecting somebody.

It sounds like they’re taking the horror theme of this block so far that it makes draft horrifying.

And this draft is only at your local FNM. There’s a whole new set of problems at a professional draft.

Wizards says the double-faced cards are open information and you can hide them if you want but don’t have to. Good luck hiding one in a professional draft.

That is, if they want to take the risk of looking around.

Wizards says you’re free to look at them, but what if a judge thinks you’re looking at the other cards in the pack?

Is it worth the risk?

That’s up to every individual player to decide.

Why don’t they just replace the double faced card with the corresponding checklist card during professional drafts? That would solve all these problems, right? Well, what if you don’t know exactly what a card does?

Knowledge of every card is a good idea if you’re on the Pro Tour, but not a requirement.

You better believe I’m going to call a judge for the wording on a card even if I’m 99.9% sure of what the card does. There’s too much on the line to risk making a mistake.

So what happens when you call a judge? There’s only one person calling the draft and the entire draft has to wait until they get you the wording.

What if they just give everybody a crib sheet with all the double-faced cards on it? Looking through a list of twenty cards takes time, and that is in very short supply during a called draft. You probably have enough time to find your first pick, but what if you get an 8th pick that you don’t know?

I was super excited to draft Innistrad in a few weeks after the drafting disaster that M12 was, but this announcement and the way it fundamentally changes the strategy for drafting has dampened much of the enthusiasm I had.

That’s enough ranting about double-faced cards for now. Time to talk about the things that I actually like about this set.

Get 'em While They're Not Yet Too Hot

This is my favorite card spoiled so far and I’ve already preordered a set. Do I think it will increase in value? No. Do I care? No, it’s [card elite inquisitor]Richter Flipping Belmont[/card]. This card has potential to be good, but White Weenie will never be the premier aggro deck while Tempered Steel is in the format. If Vampires becomes really good again, or after Scars Block rotates, it might see some play.

Dearly Departed makes me excited, too. I’m not very excited about the card itself, but rather at the prospect that there will be other cards with similar abilities. Graveyard-based abilities like this are so easily abused in Eternal formats that something even slightly more powerful than this will see a lot of play. 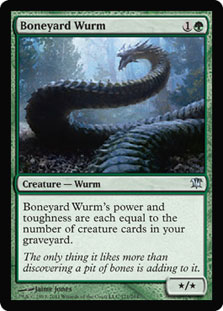 The last card I’ve seen so far that excites me is Boneyard Wurm. There’s bound to be some deck designed around milling yourself in this block, between Flashback and all the graveyard abilities, and this guy has the potential to be the biggest two-drop ever.

I haven’t seen any other cards worth preordering from Innistrad so far, beyond [card elite inquisitor]Richter Clucking Belmont[/card]), but there are a few older cards I can recommend picking up to speculate on before Innistrad releases.

Vampires is a super popular casual tribe, and this card is extremely powerful in a Vampire deck versus any sort of creature deck (aka: any casual environment). It was only printed in one set and is getting pretty hard to find since it's been out of print for a year. Right now you can pick these up for $3-4, maybe even less if you can find somebody getting rid of them since they’re rotating from Standard. With all the Vampires being printed in Innistrad, I wouldn’t be surprised to see the tribe become popular enough to rival even Elves in tribal popularity. That could cause their best lord to easily break $8, or even higher, as time marches on.

This guy has seen some very fringe play in Vengevine decks in Standard, but hasn’t broken out yet. Between the Flashback, cards that trigger from your graveyard, and Boneyard Wurm, you can bet your sweet bippy that somebody is going to want to get their own library into their graveyard, and Jace, Memory Adept is currently the best known way in Standard.

If double-faced cards see tournament play or become popular with casual players, these are going to be required to play with sleeves. I’m going to spend the next year grabbing every one that I can from drafts and toss them in a box next to my Zendikar lands and Poison Counters to sell in a few years when they become scarce.

Although this article may come off as overly negative, I am still looking forward to playing with Innistrad. I realize that I don’t really provide any solutions to the problems I present with double-faced cards. This article is meant to point out what I think is a legitimate problem and provoke discussion.

Almost every piece of art I’ve seen from this set is beautiful and oozing with flavor. I’m just extremely skeptical that the double-faced cards were necessary and not sure they’re worth the logistical nightmare. I’ll still be there from midnight on the 24th until the store closes on 25th playing every event I can squeeze in.

13 thoughts on “The Horrors of Drafting Innistrad: From FNM to Pro, The Genre’s Gone Too Far”