For the past few months I’ve sequestered my available MTG cash budget on the sidelines. Innistrad cards were all the rage, but prices frequently dwindle on new cards as they reach a supply/demand balance. And, with the holiday season, there are minimal metagame shifts during the competitive hiatus.

The turn of the New Year brings along with it an exciting time for MTG investing. There is a coincidental overlap of multiple impactful activities. Each of these changes will yield many opportunities and I plan to do some aggressive buying in the next few weeks.

Some cards will be incredibly profitable to acquire but in a very narrow window of opportunity. Other cards will fall to the wayside, forgotten for months at a time.

But what are these opportunities? What cards would be wise to pick up, and why? Let’s start with the elephant in the room: Modern.

Many financial writers have already made their predictions as to what cards will go up in price due to the start of the first Modern PTQ season. So far, the popularity of this infant format has been strong, indicating likelihood for cards to skyrocket in value. Zendikar Fetch Lands, Dark Confidant, Thoughtseize, and other Legacy favorites are likely to perform well in Modern.

But despite all the discussion on these cards, their values have been rather stagnant. While the long term viability of these cards remains strong, so long as they don’t see a reprint, there are other potentially stronger opportunities worth considering.

For example, consider the recent spike on Proclamation of Rebirth (chart courtesy of blacklotusproject.com): 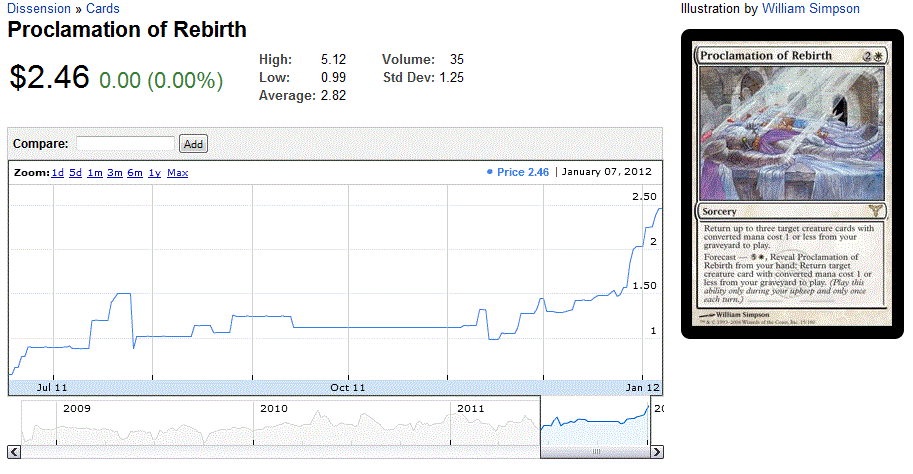 This rare card demonstrates a fairly frequent trend in the realm of Modern cards – growth from fifty cents to three dollars in just a few short months. The sudden spike was not anticipated by many and it was caused by the success of various White Weenie decks on MTGO.

A more widely known example is Past in Flames (picture courtesy of blacklotusproject.com). 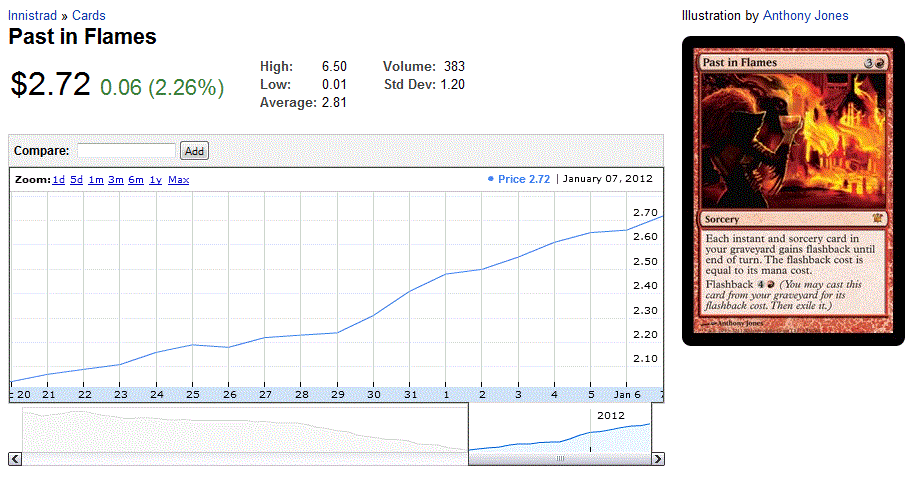 Since bottoming at around two dollars, Past in Flames has been on quite the tear. Not only has this card become more expensive on eBay, but Star City Games and Channel Fireball have demonstrated their belief in the card’s power by upping the price from four to eight dollars.

Due to the nature of the Modern format, it may be quite the gamble to buy these last two cards. They rely very heavily on the success of their respective decks. For this reason I would wait to invest/purchase until these cards put up positive results.

Since Modern is so young, there is bound to be a handful of cards that will trend similarly to these two. Rather than risk buying these cards and watching them flop in tournament play, it may be wise to sit back and wait to pounce on upcoming opportunities.

There is bound to be more opportunities as the PTQ season gets underway. You will need to watch closely as results become tabulated because, while there will be cards that will double in value, the chance to grab them early will be narrow. Speculation on Modern can be high risk/high reward if you follow this strategy.

Perhaps your investment style is risk-averse. Perhaps you have a collection of fifty fetch lands and you’d like to invest in other sure-fire bets with a longer horizon. Conveniently, there is another event in the world of Magic taking place that will yield such opportunities. In two words: Dark Ascension. 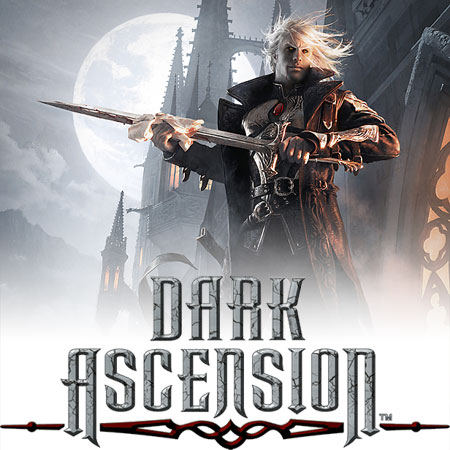 Many articles will be written over the next few weeks attempting to summarize the value of each card in this new set. People will scramble to obtain their playsets of any new deck-defining cards. It may be wise to keep a good selection of Dark Ascension cards in your trade binder, however your speculation targets may shift towards the set that will soon be overlooked: Innistrad.

When a second set of a block is launched, the first set becomes the boring one. Drafters will eagerly crack open their one pack of Dark Ascension and continue on with the ho-hum two-thirds of the draft. While people fill their trade binders with unwanted Innistrad rares, you should have opportunity to grab some format staples cheaply.

Which cards would be wise to grab while they are cheap? First and foremost, consider completing your playsets of all the Innistrad Nonbasic Lands (well, except Shimmering Grotto). These cards are all hitting a bottom in price, but once Scars of Mirrodin rotates out of Standard these once-forgotten lands will jump in value. 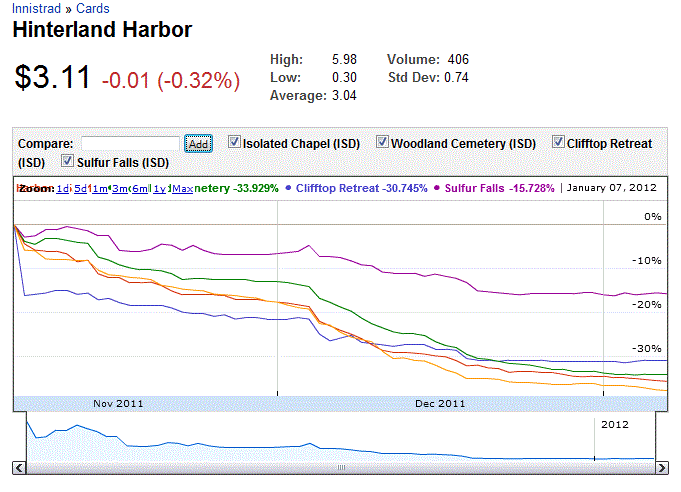 The above chart from blacklotusproject.com shows a general leveling out of value for each of the five Innistrad Dual Lands. And while [card Sulfur Falls]some[/card] will always be worth more than [card Clifftop Retreat]others[/card], they should all see a reasonable bump once Scars Duals rotate out of Standard.

The same is true for the spell-lands of Innistrad (chart courtesy of blacklotusproject.com). 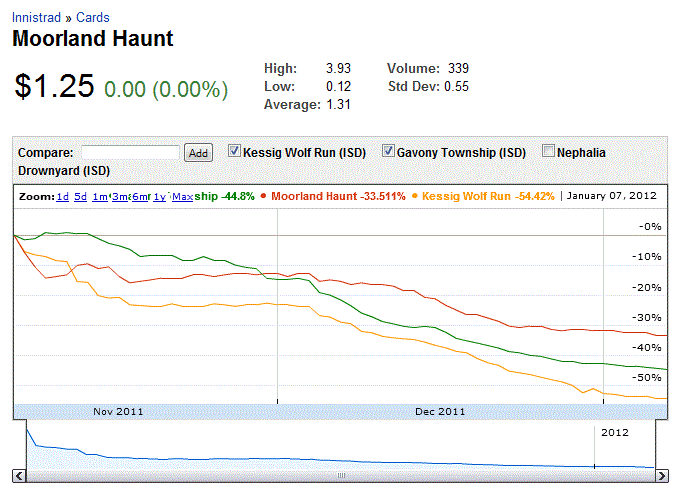 Again, the three most popular spell-lands from Innistrad: Moorland Haunt, Kessig Wolf Run, and Gavony Township have all seen a significant drop in card price since release. None of them will likely ever break five dollars. They are, however, still a great bargain to trade for while they are being ignored by most players.

The key here is to acquire cards that see significant tournament play but may not seem as “sexy” as the newest Planeswalker. Always keep in mind that, while there may be a great Planeswalker in Dark Ascension, the chance of it reaching [card Jace, the Mind Sculptor]Jace 2.0[/card] price levels after initial pre-order pricing is small.

This also means that card values have been constantly fluctuating as well. Where there are fluctuations there are opportunities to profit. But if history is any indicator, the Standard format will finally fall into a stable metagame. The top tiered decks will dominate and the card prices in these decks will increase.

The time to take advantage of this opportunity is running out. There already is a settling of the metagame, but Dark Ascension may still have a significant impact. As the spoiler season approaches, pay very close attention to possible synergies between current Standard decks and spoiled cards.

There will be opportunities – it’s just a matter of identifying them quickly enough. This site will be an excellent source of information as the spoiler season progresses so stay tuned for suggested pick-ups.

An Array of Possibilities

My intent of this article was to share a variety of possible speculation techniques depending on your own risk/reward preferences. If you are the type who likes to jump on the next hot card before everyone else, then the upcoming Modern PTQ season is your chance to shine! If you prefer investing in the stable, under-appreciated cards in Standard, keep a close eye on Innistrad card values as they reach rock bottom during Dark Ascensions time in the spotlight.

Personally, I always follow a holistic approach. Much like in the stock market, a diversified portfolio is the best way to assure you will not miss out on any major opportunities while also mitigating risk. As a result, I have a dozen Zendikar Fetch Lands, Past in Flames, and Innistrad Dual Lands all set aside until the time is right to sell.

What is in your MTG portfolio as all these exciting changes take shape?

3 thoughts on “Insider: A Very Exciting Time to Speculate”