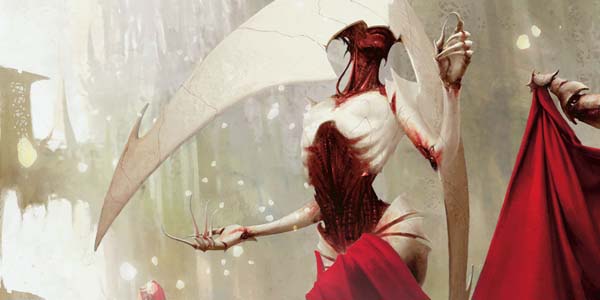 The thing is, she's worth that much for a reason.

[card Elesh Norn, Grand Cenobite]Elesh Norn[/card] has been making quite the waves of late in Standard. Some players may still be unaware how far reaching and prevalent her impact truly is. They may have heard about her popping up as a one-of in a variety of ramp or control decks, but that is merely one of the roles she's fulfilling in the current metagame.

[card Elesh Norn, Grand Cenobite]Elesh Norn[/card] has gone from high-end finisher to early game threat in a matter of months, all thanks to Faithless Looting. The Careful Study upgrade is finally showing its power in a string of new reanimator decks, epitomized by Raphael Levy's Frites deck from the Pro Tour.

Before reading further, let's look at what Levy played.* (You can check out his deck tech here.)

Reanimating for Fun and Profit 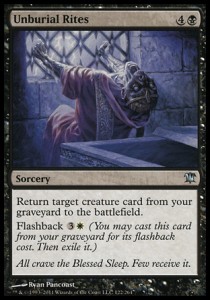 The basic premise of this deck is to self-mill and ramp your way into an early Unburial Rites on [card Elesh Norn, Grand Cenobite]Elesh Norn[/card] or Inferno Titan.

The key to pulling off such an ambitious game plan is the liberal use of the powerful mana-fixing Standard has to offer. Scars of Mirrodin duals are actually pretty sick, and combined with [card Birds of Paradise]Birds[/card] and Mulch, enable the deck to cast its five colors of spells without too much trouble.

Many decks are cold to an [card Elesh Norn, Grand Cenobite]Elesh Norn[/card] in play, and often Inferno Titan is just as crippling. Merely resolving either of these creatures immediately impacts the board by killing some of the opponent's creatures. When they stick around you just win the game, and in the event they die reanimating another is usually an easy task.

Your perfect draw threatens to plop a giant monster into play as early as turn three. Ramp on the first or second turn, then cast Faithless Looting, discarding Unburial Rites and [card Elesh Norn, Grand Cenobite]Elesh Norn[/card]. If they can't kill your mana accelerant or exile your graveyard, you're golden!

While this deck may seem fragile, it is actually a serious contender in the metagame and one you must consider when preparing for events. In light of how fast Frites can reanimate a creature, hoping to outrace them before they get to their finisher is really not an option. If you don't have an answer you're going to find yourself in a tough spot.

This deck is still relatively off the radar because nobody on the French team that played it in the Pro Tour finished in the top 8. This past weekend though, one player did top eight the Star City event in Tampa with an updated list. Here’s his deck:

In this list we can see further innovation and improvement on an already solid deck. Oblivion Ring, for example, seems amazing to me as a catch-all for a wide variety of problems. It's especially useful against an opposing Oblivion Ring or Fiend Hunter that's trapped your finisher, letting you bring it back on the cheap.

The exact mix of finishers seems to be undecided as well. It should probably change from week to week as the metagame develops.

If you're looking for a similar deck with a less crazy manabase, try out Mike Flores’ list that cuts green altogether. Going from five colors down to four is a big change. The only white mana this version needs is for flashback on Unburial Rites, so it plays out basically as a Grixis deck. Take a look:

Even though the mana here is a little better and you're not relying on fragile mana creatures, I still prefer the Frites build. Between Mulch, Trackers Instincts and Lingering Souls there are a lot of powerful cards Flores misses out on.

Lingering Souls in particular is vital to the deck's success as a means to buy time against aggro. I’m sure some number of games are also won against control decks by grinding out damage with spirit tokens.

Both of these decks are effective at executing their main game plan of slamming an early game-breaking fatty. If this seems appealing to you, try it out. If not, make sure you know about the deck so you can plan appropriately. Main deck Nihil Spellbomb doesn’t seem bad now with Reanimator and Zombies running around. Don’t leave home with out your shovel. You know, because you will need a shovel if you are working in the graveyard?

Anyway, Reanimator. Be prepared for it.

* Levy updated his list in his most recent article here. The deck is basically the same, with the exception of a revamped sideboard.

One thought on “The Grand Cenobite’s Pedigree”