This past weekend I traveled out to Columbus, Ohio to attend the two PTQs being held there. While I was away, there were some other big events going on around the east coast. Star City Games held one of their signature events down in Memphis and Wizards held a Grand Prix in Baltimore. Since I was living in my own little Modern world at the PTQs, I missed most of the coverage surrounding these other two events. While taking a look at them this week, I noticed a trend that I wanted to share with everyone today.

Zombies on the Rise 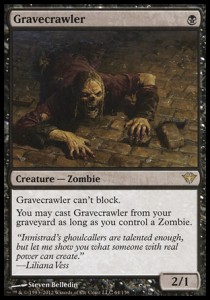 If you're like me, you certainly can't remember the last time that zombies as a tribe were competitive. Until now, zombies have been just another casual tribe that overzealous players have tried and failed to pilot successfully. Well, you had better throw that mentality out the window, because this tribe is here in force with the new cards from Dark Ascension.

Gravecrawler is the real deal. It feels like cheating when you cast him from the graveyard for the same efficient one-mana cost printed in his upper-right corner. Eat your heart out, Skaab Ruinator! Along with Gravecrawler, Geralfs Messenger provides another aggressively costed creature that synergizes with the zombie theme. We even have Diregraf Ghoul to pair with them.

Since Dark Ascension came out, I have suspected that Gravecrawler and [card Geralfs Messenger]Messenger[/card] would be enough to carry an aggressive black archetype. I put some work into the deck, but it did not seem to come together.

The key to making this deck viable was brought to light in a deck tech from the Pro Tour. The seemingly innocent draft reject Skirsdag High Priest, along with Fume Spitter, provide an additional angle of attack for a typically linear aggro deck.

Skirsdag High Priest preforms quite well against other aggressive decks, especially when you are on the draw or forced into a more defensive role.

Of course, the majority of the time, Zombies will not have the luxury of running defense. Gravecrawler can’t block at all and Geralfs Messenger can’t block the turn you play him. The reigning zombie motto is, “The best defense is a good offense.”

Whichever side of this match-up you find yourself on, remember well this adage.

Last Friday I played the blue/black version of Zombies at my FNM and did not lose a single game in the four round event. The deck is for real, and if you dismiss it as sub-par or underpowered, you may well find yourself on the losing end of your match against it. It is quite powerful, and a ton of fun to play as well.

This innocent-looking aggro deck actually involves lots of decisions and allows for ample room to out-play your opponent. A lot of the deck's intricacies are not apparent at first glance. 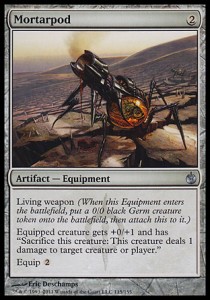 Mortarpod, for example, is one of the best cards in the deck due to its ability to trigger Morbid. Several of my opponents, good players at that, just plum forgot it was a creature. Usually, Mortarpod acts as a mere removal spell that can subsequently be reequipped for value. In this deck, the Germ token has added value as a body to tap for [card Skirsdag High Priest]Skirsdag High Priest's[/card] ability.

Let me mention Gravecrawler again for a moment. While he seems like a fairly straight-forward card, he actually forces you to play a slightly different game.

As competitive Magic players, we sometimes take for granted how we play cards because we are so used to doing things that way. We generally wait to play new creatures until after combat in order to leave mana up. This not only helps us win more combats, but also gives our opponent less information about our plans. In short, playing creatures during the second main phase is almost always better.

In this deck there are plenty of times when that is not the case.

One time in particular, I drew my card for the turn and immediately moved to combat, only to realize that my opponent could block my Gravecrawler. This would leave me without another zombie and hence unable to rebuy the Gravecrawler. Luckily I had top-decked one, but if I not, I would have missed an attack for no good reason.

When to play Diregraf Captain applies here too, but playing your lord before combat to gain the additional power and toughness should be easier to see.

The Anatomy of an Undead Army

Getting back to my original point, Zombies is very good. In case you missed it, the deck made top eight of both the Grand Prix and SCG events this past weekend. At the SCG event, there were a total of two copies in the top eight and two more in the top sixteen.

There is some disagreement over exactly how to build the zombie deck. The core is the same in all of them, but that core basically boils down to Gravecrawler and Geralfs Messenger. Blue mana is not even guaranteed, as one of the SCG decks splashed white for Lingering Souls and some players opt for a red splash instead. All in all, there is still lots of room for innovation.

The version from this weekend that most closely resembled mine was Matt Scott's, which he piloted to the top eight of the Grand Prix. Here is his list:

The main difference between this list and mine is Matt's inclusion of Sword of Feast and Famine. This card has been virtually absent from Standard for a few months now, but we may see a resurgence due to the recent popularity of Wolf Run Ramp and Blue Black Control. Sword seems well suited to bring down both of these decks, as attacking their hand can be an effective strategy.

However, Protection is not what it used to be because of the adoption of cards like Geths Verdict, Liliana of the Veil and Slagstorm. The sword's mana cost is also of some concern. With only twenty-two lands, you may have a rough time surprising opponents. Usually you'll need to take a turn to play the sword and another to equip it. Luckily, you do have a recurring threat in Gravecrawler, which makes Sword better.

In the current iteration of my list, I've opted for fewer [card Diregraf Captain]Diregraf Captains[/card] and more [card Fume Spitter]Fume Spitters[/card], but the rest of the cards are basically the same. If you like this deck, there is some wiggle room to adjust it to your play style and preferences.

After playing Red Black Vampires for so long last season, I found it easy to jump on board with this deck. If you enjoy an aggro-control strategy, this may be the deck for you.

You can even relive last season and jam red/black aggro all over again! Just thinking about Brimstone Volley in a deck with Mortarpod and Fume Spitter has me itching to brew up a red/black list.

That, however, is for another day. For now, I am set on the power of Phantasmal Image.

Regardless of your like or dislike for the zombie tribe, make sure you're prepared for it at your next major event. No life total is safe.

2 thoughts on “Unleashing the Zombie Apocalypse”