As if Standard season wasn’t in enough flux, we have recently been bombarded with exciting Avacyn Restored spoilers. This set appears to be a casual player’s dream, with a slew of new Angels and Demons, two new Planeswalkers and a “miracle” ability that will be wetting creative pallets for months to come.

Personal Tutor – Did You See That Coming?

I frustratingly admit I missed the Personal Tutor jump, catalyzed by the spoiling of Temporal Mastery. By the time I saw all the discussion on this combo, the Tutor’s price doubled and was on the verge of tripling. For me, the opportunity was missed and I refuse to pay $40 for an unproven Portal UNCOMMON card. On top of that, even though Personal Tutor is one of those Portal cards, it would be wise to unload any you've picked up as soon as possible. Completed listings on eBay have been ranging from $30-40 a card, so the window is open for you to cash out on the hype of the interaction.

The good news is I am fairly confident there will be other opportunities to profit from. Rarely does such an exciting set have impact in such a narrow space, and I believe there will be some other synergies to be discovered across formats.

This seems to me a bit difficult, however, especially in the context of Standard. The format is so wide open already, and adding a diverse set of powerful cards spins the wheel even faster. Which archetypes will dominate remains a mystery to most.

What Are Some Possibilities?

Red Deck Wins readily comes to mind as a possible force in the new Standard. We have the first 2-mana Planeswalker, Tibalt, the Fiend-Blooded, which happens to cost RR. Also a much cheaper, more powerful Flame Wave has been spoiled in the form of Bonfire of the Damned.

Finally, and in my opinion most impactful, is the aggressively-costed Vexing Devil. By comparing this card with similar cards which see constructed play, we can begin to understand the Devil’s potential impact.

On the surface, it’s a 4/3 creature for R. This is certainly powerful enough to catch one’s attention. When reading the “fine print” we find out that more than half the time this card will be a Flame Slash for players. But even with this drawback, is this card not still playable?

In Legacy burn decks, Lava Spike sees major play. This card does a full 33% more damage at least. Even mid-game, drawing this card isn’t the absolute worst since he’s either a 4/3 body or a 4-damage spell. I wouldn’t preorder this rare at current prices, but I would keep an eye on Red Deck Wins cards that curve well with this one. 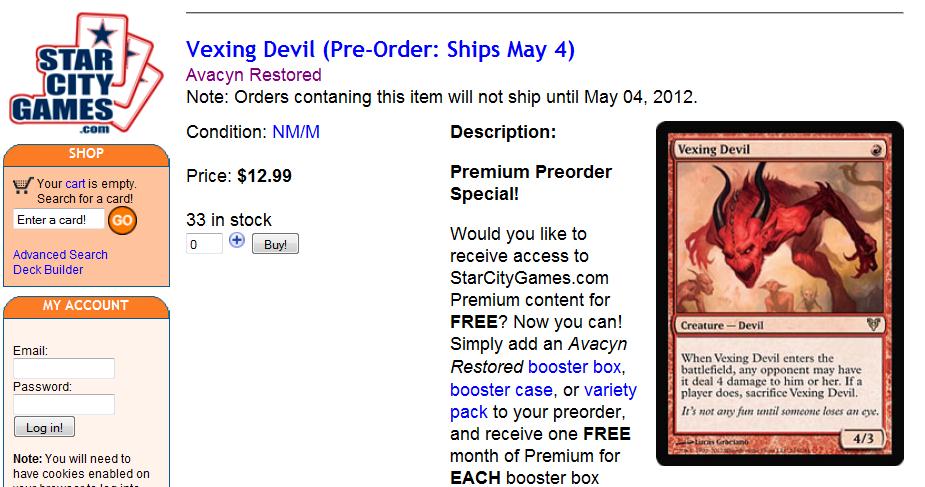 An archetype that has acquired an array of weapons is the U/X control archetype – especially when combined with White. There have already been seven newly spoiled Angel cards as of this article’s writing, with the potential for many more. Not only is this a casual player’s dream (especially for me since I collect Angels), there is also bound to be a couple of these powerful flyers that break into constructed play.

The newly spoiled and seemingly out-of-place Kamigawa Planeswalker, Tamiyo, the Moon Sage, will also tempt Magic brewers. While a tad bit expensive at 5 mana, her ability to protect herself and draw cards cannot be readily overlooked. Keep in mind she is a new Planeswalker, and as such her pre-sale rate will be inflated. Give it some time for the dust to settle – her casual appeal and potential playability will make her an interesting one to watch in the coming months.

The U/W aggressive [card Delver of Secrets]Delver[/card] decks aren’t likely to benefit as much from these control-style cards. Their aggressive nature and strategy of implementing efficient U/W creatures will not see as much augmentation from the spoiled cards. At least not at first glance.

Similarly, nothing from the new set has leapt out at me as an auto-include in the R/G ramp style decks. Miracle cards like Revenge of the Hunted and Thunderous Wrath are interesting, but they aren’t likely to make the cut. Still, this archetype is so powerful it still may survive the release of Avacyn Restored.

You may have noticed this article was written vaguely with very little definitive calls. This is 100% by design. With some sets, there are obvious winners and obvious strategies that will dominate a format. Cards like Snapcaster Mage, Liliana of the Veil and each of the Swords are all recognizably powerful in a constructed context.

Conversely, many of the spoiled cards from Dark Ascension were interesting but decidedly weak. This included the likes of Beguiler of Wills, Jar of Eyeballs and Requiem Angel. There were very few cards people speculated would impact the Standard metagame and these people were largely correct.

With Avacyn Restored, it’s still a giant guessing game. I have no doubt the set will sell exceptionally well because of the casual appeal, but the set’s impact on constructed play is a black box. It seems like the new Planeswalkers are strong enough to see play, but then again even Sorin, Lord of Innistrad is struggling to break into Standard Top 8’s. And with so many awesome Angels, not all of them can become another Requiem Angel, right?

My recommendations will begin to sound like a broken record. Never pre-order hyped singles – the odds of the purchase paying out is extremely low. Instead, I would look to move into safe Innistrad and Dark Ascension cards. After all, they will not be opened as part of FNM drafts any longer, and that means their supply will rapidly decline.

While still a tad bit expensive, Snapcaster Mage would be a great card to acquire at your pre-release. It shouldn’t be too difficult to trade the exciting, new Avacyn Restored cards for a couple tried-and-true Snapcasters. Barring the banning of the card, this guy is primed to remain in the $20 range throughout its tenure in Standard and beyond.

Other stable cards include cheaper Planeswalkers (I’m looking at you, Garruk Relentless // Garruk, the Veil-Cursed) and perhaps even Geist of Saint Traft. These guys have demonstrated their power to me enough to be a believer in their influence even as the format rotates.

My largest focus still remains on the Innistrad rare lands. I like these cards for three key reasons.

First, these lands will always be playable in some fashion. Perhaps not every color combination will dominate Standard at a given time – but chances are there will be at least a couple combinations worth having. And once the Scars Dual Lands rotate, the importance of these will increase significantly.

“But wait a second, Sigmund. M13 will likely have Dual Lands and we are all expecting Ravnica Duals to be reprinted in the recently announced Return to Ravnica set.” I know that’s what you’re thinking. 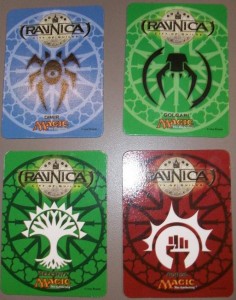 I’d like to remind you here that there were four main guilds in Ravnica: Boros (R/W), Golgari (G/B), Selesnya (G/W), and Dimir (U/B). Two of the four guilds are enemy colored. Even if we had Sacred Foundry and Overgrown Tomb reprinted in Standard, wouldn’t players also want to run 4x Clifftop Retreat and 4x Woodland Cemetery? These Innistrad Duals will become even stronger with Shocklands because there will be fewer instances where these will come into play tapped.

To me, returning to Ravnica and all its guilds implies one thing – the dominance of multi-colored decks. And even if Wizards printed 3 new cycles of Dual Lands, there is little incentive NOT to play the Innistrad Duals in an appropriately colored deck.

The final reason I like these lands right now is because their supply is about to get cut drastically. Once Avacyn Restored is launched, these once easy to come by rares will soon disappear from trade binders. While they may not hit $20 like their Scars counterparts did, spiking at $10 is not out of the question. After all, we’ve already seen this happen once with Isolated Chapel for a short period of time.

The main themes of this article should ring a bell. I generally have the same attitude whenever a new set is released. Trade hyped pre-release cards into staples and widely played cards from the past couple sets.

Really, this concept is supported by fundamental economics. You are trading away cards which will only increase in supply for cards which will only decrease in supply. And the demand may be higher on the Avacyn Restored cards while the set is new. After a few months, demand will settle as it always does and people will start to wonder how Woodland Cemetery and Sulfur Falls became $10 cards. This will be your chance to finally trade out of these lands and into the next big thing.

And with the next expert set being Return to Ravnica, we can bet there will be many “next big things” to come.