Spoiler season is exciting. There’s no denying it. I’m incredibly excited, mostly because I’m not a huge fan of Standard as it sits today. That excitement leads to some terrible decisions for a lot of people, myself included. That’s what I’m here to talk to you about today.

Think of the following for a moment. You go out to a bar or club with some friends and the social lubricants start flowing. You set your sights on the Scarlett Johansson or George Clooney look-a-like across the room. What are they doing here? Why is no one else trying to get in good with them? Before you know it, you’re talking to someone you think is the hottest thing since sliced bread. It’s closing time and you think you’ve got it made with the cutest thing in the room. You end up going home with said individual and having a grand time.

But then the morning comes. Maybe you’ve been in this situation, maybe you haven’t (I’ve never been interested in a one-night-stand, personally, and now I’m married so I’ll never have this experience, for better or worse), but we all know what happens next. The early morning rays of sunlight fall across your face and drag you from your pleasant dreams only to discover a pounding headache and holes in your memory.

You realize you don’t recognize your surroundings and look around to get your bearings only to discover there is someone in bed next to you. Even a quick glance tells you that you’ve made a grievous error. How did this happen? “What was I thinking?” you ask yourself.

The answer is you weren’t. Not clearly, at least. You were intoxicated.

That’s spoiler season, in a nutshell.

You become intoxicated with the heady mix of shiny, new things and best case scenarios. Instead of a bar or club, your haunt is the rumor mill forum or Twitter, searching for the card that will bring you to the promised land and make all your dreams come true.

You set your sights on the Stoneforge Mystic or Jace, the Mind Sculptor look-a-like that went up on the Mothership on Monday. How could they print that card? Why is no one else seeing how broken that card is? You find that magical connection with a cute little card that’s the hottest thing since sliced Snapcaster. You want it. No, you need it.

You pre-order it as soon as it’s available. Release day comes and the card arrives in the mail soon after.

But then the morning comes. I’d like to think we’ve all, as Magic players, been in this situation. The early season rays of FNM fall across your face and drag you from your pleasant delusion only to discover a pounding headache and holes in your memory.

Okay, so it breaks down here a little bit, but it’s a feeling many of us have had. This card underperforms and you paid a premium for it. A few weeks later and the Planeswalker you pre-ordered for $24.99 is now $12.99. You’ve made a grievous error. How did this happen? “What was I thinking?” you ask yourself.

The answer is, you weren’t. Not clearly, at least. You were intoxicated.

Maybe you think you’re better than this, but look at it in a broader sense. If you’ve ever speculated on a flop or been excited about a card that turned out to be a dud, you know what I’m talking about. If you haven’t had this experience, that’s fantastic.

If you want to make sure you never have this experience, I’m here to try to help. Learn from my mistakes and the mistakes of others. There are a number of rules that will spare you the disappointment and shame of buying into a card you shouldn’t have.

Never buy a Planeswalker until well after release unless you know for a fact you will need it for a tournament.

This one is pretty simple, but it seems like people still make this mistake. Everyone wants to catch the next Jace, the Mind Sculptor, but I’m of the opinion that will never happen again. Wizards can’t afford for it to and they know a lot more about Planeswalkers now.

There have been Planeswalkers that you could have sold at a profit if you bought them for their pre-release price, but that window typically only lasts for a week or two, examples being Tezzeret, Agent of Bolas and Liliana of the Veil. Look at their prices now, though. Tezzeret, Agent of Bolas is $9.99. Most Planeswalkers steadily decrease in price from the moment they are spoiled.

Even the most underrated Planeswalker of all time, the one I used as my exemplary $24.99 Planeswalker above, will be at a lower price at some point over the next six months.

Tibalt, the Fiend Blooded is better than people think it is. Is it better than Garruk Relentless? Maybe, but you can pick Garruk Relentless up for under $13.00 right now. It’s just not worth it. Speculating on Planeswalkers, or even just trying to get your set early, is almost always going to be a terrible idea.

Never buy the cards that are getting the most buzz until well after release, if ever.

In the height of its popularity, Reflecting Pool demanded slightly less and that was in a set with no mythic rares. Seachrome Coast is probably the most played non-basic land that has been printed within the last two blocks and it’s $15.99.

The best rares in most sets top out at that price and normally sit in the $15 to $20 range. Those rare are also typically cross-format staples and all-stars. Even if you think Cavern of Souls will see a lot of play, it’s unlikely the price will go up. It’s much safer to hedge your bets and wait.

At worst, you can likely just pay that same price later when you know it’s a sound investment. Don’t get me started on Temporal Mastery. That card is Skaab Ruinator all over again. Skaab Ruinator went up to $30.00 during pre-orders.

Look at the bigger picture.

Is it a big set? How long will it be the current draft format? Does it have powerful commons and uncommons? What’s the hype surrounding the rares and mythics? If you really want to be thorough, what’s the total price of each rarity?

Obviously all of these impact prices and they might not get the attention they deserve. Prices of cards from Avacyn Restored will likely settle higher than they would for Scars of Mirrodin, due to fewer cards being in circulation. Each set will typically experience an aggregate price ceiling while it is the current product being sold. If the value of the cards in the pack, on average, exceeds the cost of the pack then it creates an odd situation that the market will typically correct on its own over time.

This could mean the price of packs would go up or the price of individual cards would decrease. While in print, typically it’s the latter.

So can the market sustain the aggregate price of the cards as they sit today? For any set prior to release the answer is typically “no”. Avacyn Restored is a set with many hyped up rares and mythics. There’s no way these prices can stay this high. Expect prices to drop precipitously for any card that isn’t an immediate staple over the course of the next year or two. Then we will likely start to see the effect of a smaller supply of singles come to bear and cross-format cards will begin to tick up in price.

Wait for the data dump.

The day the full visual spoiler arrives is the best day of any spoiler season. You get to see all the pretty pictures for all the sweet new cards and you get to find the cards that will make you money. The cards that are all seen for the first time in a huge clump don’t get the individual attention that the other spoilers get.

The lack of hype and concentration of data means that these cards won’t get the pricing attention they may deserve. These are the cards that are often fine to buy early on. It’s unlikely you’ll lose much money, if any, and you might catch a big break. Speaking of catching a break… 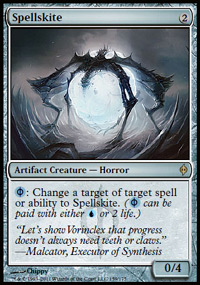 There are almost always a few cards in each set that people aren’t shouting from the rooftops about, but that end up being excellent cards. This is where you can make your money. This may sound difficult, but it really isn’t. The trick is to do your homework. Get on Twitter, follow great players. Read every article.

My last major success in this area was Spellskite. I thought the card looked interesting, but not many people seemed to be talking about it. It’s not a very flashy card. You don’t get to resolve it and win the game, typically. It didn’t have any crazy combo implications when it came out.

It’s the type of card people don’t get excited about.

There were a few people that mentioned it. I believe early on Gerry Thompson thought it would be a strong card. For some reason the price to pre-order Spellskites was on the order of $2.00. Even now that card is sitting at $3.49. If you pre-ordered them you could have easily sold them to a dealer at $5.00 within a month of release. That’s insane profit margin. I know quite a few people that made good money on that card.

You don’t have to find the Tarmogoyfs and Jace, the Mind Sculptors. Find the Spellskites.

There are plenty of hints about those cards for this set. My #1 pick for profit potential from this set is Entreat the Angels. Patrick Chapin likes the card, LSV likes the card. Do you need more evidence? It’s a mythic and it’s easy to get for $6.00 or less. I’ll be shocked if this card doesn’t settle at $10.00 or higher. [Editor's note: At the time of this writing, Entreat was a $6.00 card. It shot up this weekend and is now $18.] 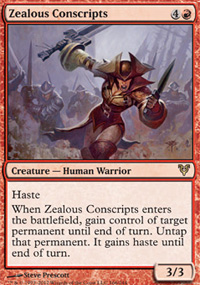 erated, Batterskull. I wouldn’t be surprised if Entreat the Angels saw a level of play similar to these cards. It doesn’t hurt that it’s a good Commander card and makes Angels, which casual players love.

Keep an eye on Zealous Conscripts as well. It was first offered at $.75. Now it’s $1.99. If you bought it right when it was spoiled you more than doubled your money. It may still go up. $3.00-$5.00 seems like a totally reasonable place to hit at some point. Just watch for your window to sell and try to trade for these early at rock bottom prices.

Don’t fall victim to the allure of new things. Unless you’re Patrick Chapin, there’s a good chance you’re mis-evaluating that Temporal Mastery or that Restoration Angel. Be patient and try your best to follow the rules I’ve laid out for you here. I’ve pre-ordered Planeswalkers. I’m not proud of it, but you can learn from my mistakes.

4 thoughts on “FREE Insider: I’m Wrong and So Are You – 5 Rules for Avoiding the Prerelease Poison”