Before I delve into this week’s topic, I want to share an interesting eBay auction I stumbled upon last week. This particular sale is directly related to last week’s article, and I found it rather appropriate and amusing:

There you have it. If you want to begin the wild ride of cornering the market in Alpha Island Sanctuary, you can now become lazy about it and do so in one significant eBay purchase. For the cost of $1,395 you can influence the market price of a full, single Magic: the Gathering card. No wonder Star City Games is sold out!

As For This Week

A reasonable argument could be made that the Standard format has officially stagnated. While not completely dominating SCG Open Top 8’s, it is difficult to miss the majority presence of [card Delver of Secrets]Delver[/card] decks. To argue the deck’s dominant performances would be futile.

This type of format stagnation is typical during this phase of a Standard season. Both blocks are released and all that is left is M13’s release before we return to Ravnica and say goodbye to Scars of Mirrodin block. We have seen the same phenomenon occur before with Caw-Blade, Jund, Faeries and all other dominant Standard decks in history. Until rotation happens, our once-thrilling, evolving format is gone.

For this reason alone, my investment attentions have turned elsewhere. Rather than heavily load up on Standard cards, my goal has been to take recent profits and “bank” them in stable cards.

For example, I recently purchased a couple NM Alpha rares below retail buy prices with the intent of holding for the long term. I have also expanded my sealed booster box portfolio to nine unique boxes ranging from Italian Saviors of Kamigawa to Unhinged.

As for actual playable cards, there are just a few that I have been actively buying. The only other acquisitions I have been making are in the bargain department, where card prices are below average thus leaving room for immediate profit.

Return to Ravnica, the next expansion set, will completely reinvent the Standard format. I cannot imagine there will be many similarities at all between Scars of Mirrodin block and Return to Ravnica block. With this in mind we can recognize that many powerhouse decks of today will become obsolete soon enough.

This leaves us speculators with a challenging predicament. Without having sufficient information in the future (i.e. no crystal ball), we need to be creative with where to play. In times like these I often concentrate on the conservative, often investing in Innistrad block staples which should remain powerful despite Standard rotation.

My top investment is still in Innistrad Dual lands. These five enemy-colored fixers are well poised for a price bump and the window to acquire profitably is nearly closed. Back in January (https://www.quietspeculation.com/2012/01/insider-a-very-exciting-time-to-speculate/), I predicted that these card prices had hit their bottom. Take a look at the chart now (chart courtesy of blacklotusproject.com): 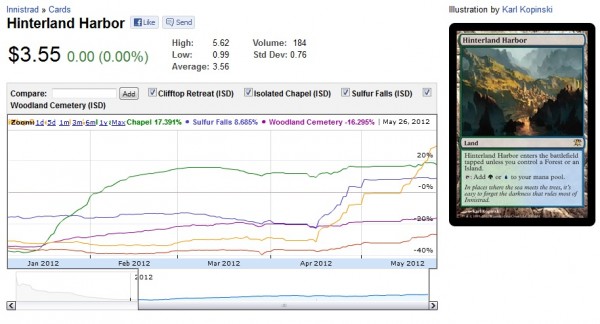 So far, three of the five Innistrad Dual Lands have risen significantly since the bottom I called in January. Clifftop Retreat, which at one point was the cheapest of the five lands, has recently overtaken Isolated Chapel as the card with the largest bounce. Sulfur Falls has also recovered nicely as of mid-April.

There are still two Innistrad Dual Lands which are lagging the trend – Hinterland Harbor and Woodland Cemetery. These are the two lands I own the most of.

My rationale to acquire is simple – as the Standard format goes through drastic changes later in the year, all sorts of color combinations will have their chance to shine. R/W and B/W may be the favorable color combinations today, but I am convinced we will eventually see a winning deck which contains G/B and U/G. When this occurs, these two underperforming Innistrad Dual Lands will have their opportunity to shine. Especially Hinterland Harbor, which is blue and thus will inevitably be strong!

Even if this never happens, the prices have clearly bottomed in the short term, and with fewer and fewer packs of Innistrad being opened, quantities will eventually disappear from people’s trade binders.

Besides Innistrad Dual Lands, there isn’t much in the realm of Standard that I am actively acquiring. If I stumble upon a Geist of Saint Traft I will consider picking one up. The same goes for Huntmaster of the Fells // Ravager of the Fells. These cards have come off their peak prices, but I feel they should be strong enough to remain relevant as the Standard metagame shifts.

That is the overall approach – I aim to acquire cards from the newest block which I believe will remain relevant. Zealous Conscripts, while still not completely explored, is another card I am willing to acquire at the right price. Another, Terminus, should remain relevant in the coming Standard format since it’s a powerful board sweeper. However, powerful board sweepers have always been a format staple, yet their value rarely breaks five dollars. I’m not as bullish on this card as a result.

Finally, the last Standard cards I’m interested in these days are the Innistrad Planeswalkers – Garruk Relentless // Garruk, the Veil-Cursed and Liliana of the Veil.

Garruk has fallen significantly from his highs, despite seeing occasional play (chart courtesy of blacklotusproject.com): 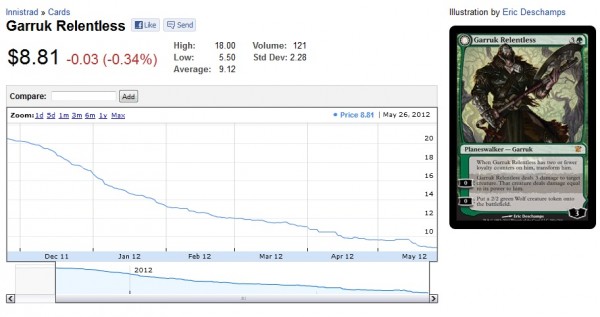 While I would not necessarily look to purchase dozens of this card, I always make sure to have a couple on hand. The right midrange deck could really benefit from this Planeswalker, and as the price drops towards five dollars, he will soon hit the absolute bottom price for a playable Planeswalker. Downside is thus limited.

Liliana of the Veil, on the other hand, has retained her value slightly better (chart courtesy of blacklotusproject.com): 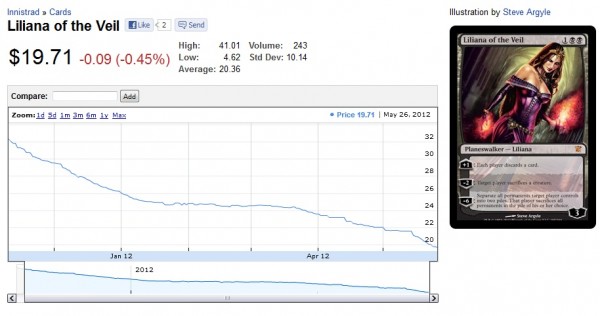 Her $20 price tag carries with it greater downside risk despite the fact that her chart looks remarkably similar to that of Garruk. She deserves to command a larger sum of cash though, since she sees significant play in Modern and even occasional play in Legacy. Like Garruk, my recommendation would not be to acquire many extras of Liliana. Still, at the right price I would consider purchasing more. I never seem to have difficulty moving her out of my binder.

Last But Not Least – Eternal

Modern season is finished but far from over. This format has been hugely successful and some card prices will never again be the same.

What are my favorite eternal acquisitions (besides obscure Alpha rares, that is)? You won’t be surprised to hear that my number one pick-up are Zendikar Fetch Lands. These cards are synonymous with ten dollar bills and will be just as good as cash in the future. They may never reach Onslaught Fetch Land levels, but they will always remain in high demand.

Speaking of Onslaught Fetch Lands, I have finally completed my set of 20. While I’ve owned the blue ones for years now, I never bothered to acquire Bloodstained Mire and Wooded Foothills. These cards have been stable since 2011 and they should slowly and steadily grow in value with time. Besides, it feels good to finally have completed my collection (chart courtesy of blacklotusproject.com): 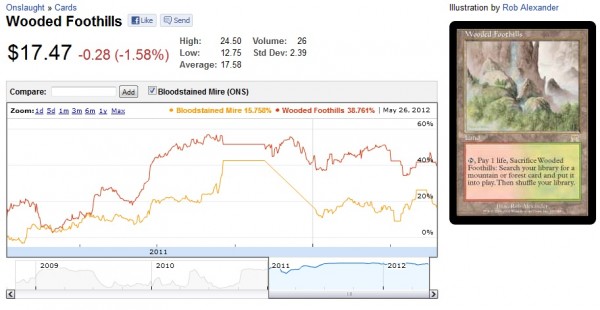 While the market is turning over, the ultimate safe investment is cash. Holding onto a sizable cash position in anticipation of Standard rotation may be the wisest thing to do with your money at this point in time.

As I mentioned before, during this time I balance cash positions with long term investments, such as NM Alpha rares and sealed booster boxes. I also take this time to satisfy the collector within me by acquiring needed staples. While financially neutral, everyone needs to maintain a collection of some sort – it’s a key aspect of the game and one I enjoy very much.

I’m just glad I can use profits from this past season to pay for this enjoyment! Hopefully you have had the same level of success.

22 thoughts on “Insider: Playing it Conservative Before Standard Rotation”