If I had to guess, I'd say that green is the most popular color in Commander. Green may be mostly about ramp and fatties, but it does an incredible job of it -- especially considering how hard Wizards has been pushing gigantic monsters recently. Because Commander is an eternal format, green also has access to all kinds of utility effects that aren't part its color pie and shore up its weaknesses.

So green is fun, flexible, and popular. From a budget perspective, that means there will be fewer cards that we can acquire for a steal from online vendors. It means that a budget green deck will probably be more underpowered than budget decks in other colors. Without access to Woodfall Primus, Avenger of Zendikar and Primeval Titan we'll have to work a little harder to make up the difference in power level.

Picking a Commander is especially important when budget is a real constraint. Frequently it's the best card in your deck so it's important to maximize favorable interactions. When I asked Twitter about green Commanders, I got pretty even responses for Omnath, Locus of Mana, Baru, Fist of Krosa and Kamahl, Fist of Krosa. Each of these is a great Commander in their own right.

The one that I like best for a budget deck is Kamahl, because he's his own mana sink, so after ramping as much as you want you have something to do with the mana. That said, I didn't pick any of these three to build a deck this week. My issue with all of them is that they want you to build a generic ramp deck, which is incredibly difficult to do on a budget because you won't have any good threats at the top of your curve. More importantly though, all of these decks will have about sixty cards in common, and that's not interesting.

What I did do is put together a list of budget ramp spells, fatties and utility spells that are a great foundation for any budget green deck:

The thing to notice here is that even the bad ramps spells cost about fifty cents. That's going to be a theme throughout this article. The good common and uncommon green cards get played in non-budget decks, both in Commander and in other formats like Modern. There really aren't any ramp spells that cost a quarter or less, and finding fatties for less than a dollar is near impossible.

To work around this, you'll want to maximize the amount of your budget that you can spend on awesome fatties. You can do that either by making the rest of your deck sub par, or by running a ton of lands and a Commander like Azusa, Lost but Seeking.

The problem is that Azusa herself is expensive. Enter our Commander for this week. 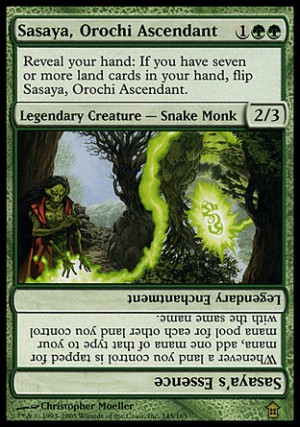 Sasaya solves most of our problems pretty nicely.

She wants a huge portion of your deck to be Forests, which is pretty convenient for our budget. She also wants you to put lands in your hand rather than in play, an effect other decks are less interested in. Since she can easily quintuple the amount of mana you have at any given time, you can avoid expensive ramp spells and focus more on powerful threats.

The issue, of course, is that you have to get to seven lands in your hand, and that's an awful lot. Furthermore, if you have seven lands, what spells are you going to be casting with Sasaya?

We can do a few things to mitigate each of these problems, but let's start with making sure we can get her flipped.

Fetch All the Lands

Our first concern is consistently flipping Sasaya, because otherwise our so-called ramp deck doesn't have any actual ramp. We have two avenues to accomplish this.

The first, and easiest, is simply to run a bunch of lands. If you run about seventy lands you should be able to flip Sasaya by turn five with minimal effort.

This option makes it unlikely that you'll find enough gas to actually win the game. The other approach is to turn some of those seventy lands into tutors for lands and draw spells. This ensures you hit the requisite seven lands, but also thins your deck of lands and digs for threats. Let's take a look at the set up:

This part is straightforward, though it's also the area that could use the most upgrading. There are five different lands, mostly so that you can still cast Realms Uncharted even in the midgame. It may be worth finding more lands within the budget, for example Petrified Field, to make sure Realms doesn't get blanked as the game goes on.

The real upgrades, though, are pricier. This deck could be supercharged with some combination of Scrying Sheets, [card Snow-Covered Forest]Snow-Covered Forests[/card], Thawing Glaciers and Deserted Temple. These lands fill your hand with lands, filter through your deck for bombs, or put lands directly into play while maintaining the same number of lands in hand for Sasaya. However, even beat-up snow lands are $0.75, enough to exceed our $35 budget on their own.

If we don't get to jam these powerhouse lands, how can we fill up our hand? Fortunately, there are a ton of effective ways: 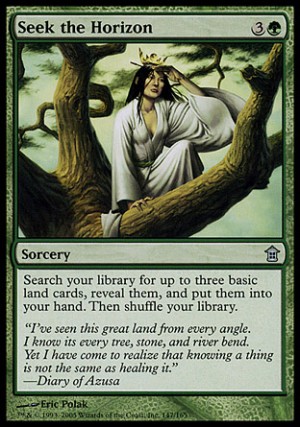 This is the backbone of the deck. For the most part, each card here nets you two cards, at least one of which is going to be land. If you draw enough cards and thin out enough lands, not only will you be guaranteed to flip Sasaya on turn four or five, it will also become increasingly likely that you draw into gas.

You'll also notice that few of these cards are particularly expensive. Those that are expensive are generally staples that you may already have, and will want to pick up if you continue to play. These are the best spells for digging through your deck and they do a ton of work for you, especially if you can start regrowing them with Revive and Woodland Guidance.

The cheaper effects here are generally better than the expensive ones. For example, Fa'adiyah Seer is much better than Rowen. Even if you have to keep reinvesting mana in something like Scroll of Origins, mana is never a problem once you flip Sasaya.

Let's say you flip Sasaya on turn five. If you untap and play a land, you have access to 36 mana. Realistically, what are you going to spend that much mana on? It doesn't matter if you have to sink some of it into keeping your hand full so you can reflip Sasaya if she gets destroyed.

With the flipping situation taken care of, the only issue left is including enough high-impact creatures to actually kill a table with two or three of them.

We Got the Beats

When we talked about budget green decks, I said that finding guys was a pretty big problem, but it's actually not so bad once you cut out all of the expensive ramp spells. At this point we've spent about $12 of our budget, which means we can afford to splurge a little on the fatties.

The funny thing is that most of the creatures that tend to be insane in Commander aren't even that good in this deck. Avenger of Zendikar, for example, just isn't that good, because you'll never have many lands in play and you'll never put many into play at one time. What you want is a threat that you can continuously pump a ton of mana into to generate a board presence, as opposed to a one-time investment that has a fixed effect.

Here's what I could find: 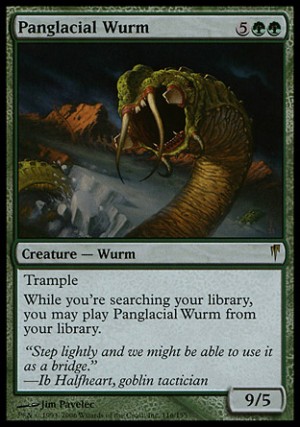 I'm pretty happy with this suite of fatties. You have a little bit of everything here: ways to generate creatures, draw cards and answer problematic permanents. There's a great combination of stuff, even if there isn't as much flexibility as I might like. You'd obviously love to have cards like Tooth and Nail and Summoner's Pact in order to pick and choose which threats to deploy at any given time.

The best thing that you could do is probably add an Eldrazi Temple, a few ways to tutor it up, and a pile of colorless creatures like Kozilek, Butcher of Truth and Duplicant. In our bare-bones version, you still have Jade Mage and Nemata, Grove Guardian which allow you to continuously invest mana to create a board presence without overextending too much.

One of the first decks I built for Commander was a Sasaya deck not unlike this one. That deck made me love the kind of huge, epic, swingy things that can only happen in games of Commander. With enough Regrowth effects, you can ritual up with Journey of Discovery and cast absurdly gigantic things every turn for the rest of the game.

I think this deck turned out reasonably well. There's certainly a better balance that could be struck between the amount of fat and mana sources, but that will require playing a ton of games to get right. Playing those games might not be something I mind though, with a deck that goes this far over the top of what other decks are doing. I may just build this one on MTGO and record a few games with it to see if it can hold up!

Now that we're three decks into the series of mono-colored budget decks, I'm starting to run out of steam. I think I have a red Commander picked out, but the blue one is really stumping me. Help me out by suggesting blue Commanders on Twitter or in the comments.